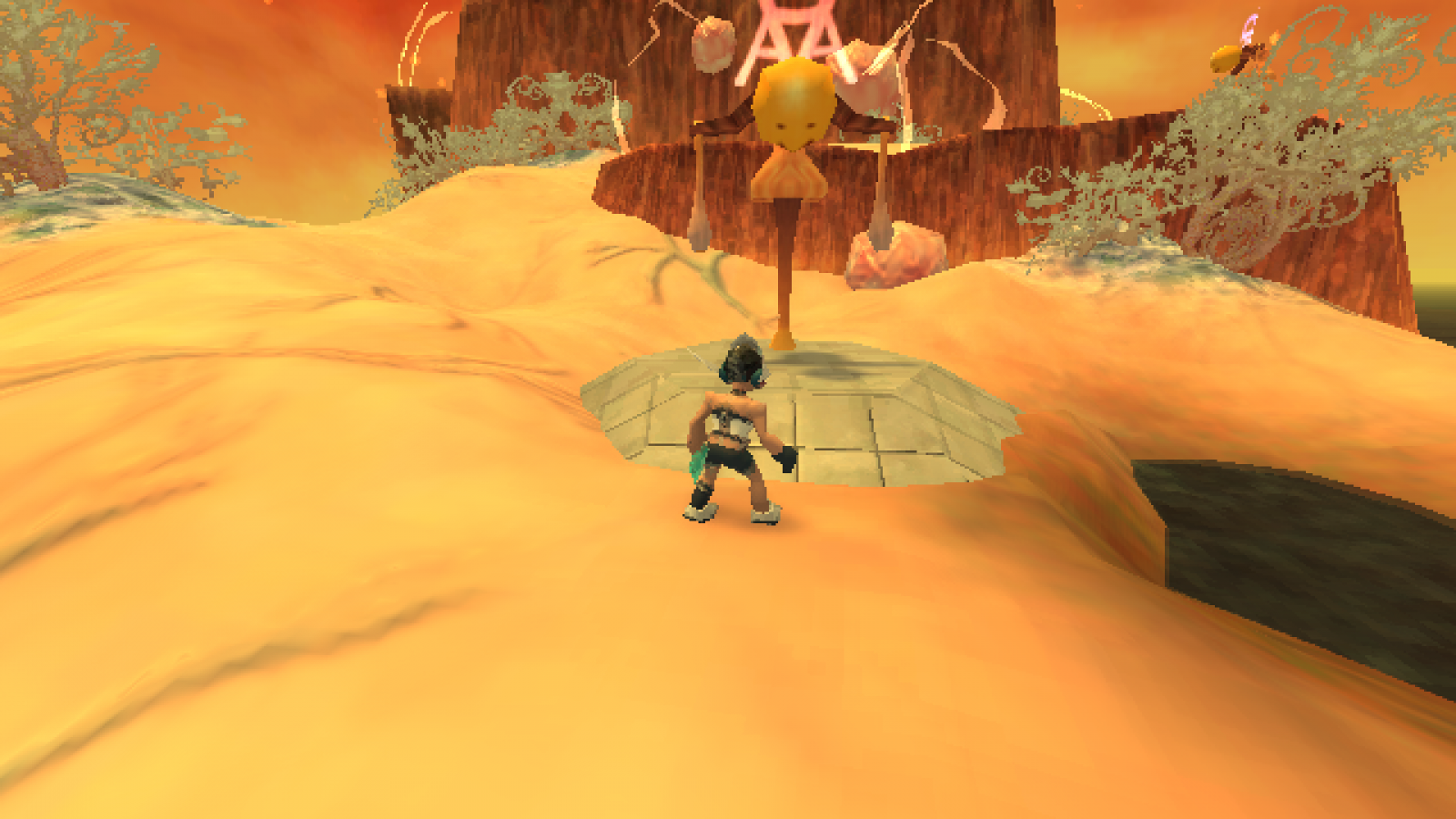 Plenty of games mine nostalgia recklessly, chucking in cheap jokes and references to keep players entertained. But I can’t think of a game that uses it as expertly as Anodyne did, paying sincere tribute to long-loved games and using familiarity to make the darkness under its surface even more upsetting. From what I recently saw in a demo of Anodyne 2: Return to Dust, it’s doubling down on both the joy and the unease that nostalgia can conjure.

Anodyne 2 doesn’t look anything like the original — at least at first. While Anodyne’s graphics and gameplay were heavily inspired by top-down 8-bit games like Link’s Awakening, the start of the Anodyne 2 demo takes its cues from N64 and PSX-era action games. Instead of exploring dungeons and fighting bizarre enemies like in the first game, you just explore the environment, talking to equally bizarre NPCs. The game’s protagonist, Nova, wakes up on an island that’s all blurry rocks and low-poly landscapes, with a bizarre orange color palette. It’s clear that instead of simply mimicking an archaic look, Anodyne 2’s designers are trading in graphical fidelity for their own unique, expressive style. At least in the demo, they play with lighting and camera angles to turn what could just be a stylistic rehash into an ode to and expansion of the form.

Shortly into the demo, I got my first glimpse at the game’s other art style. At certain points, Nova has to shrink down to microscopic size and enter other character’s bodies. When she does, the game shifts to a top-down pixel art style much closer to the original Anodyne, and it plays much more like the original as well. It feels a bit less fresh than the overworld, just because we’ve seen this style much more frequently, but it still looks great, with interesting character and level design. Each of these internal worlds has its own theme that’s reflected in both graphics and gameplay. One level is modeled after a construction site, for example, while another is a seemingly cookie-cutter domestic scene.

I don’t want to give too much away about the bits of story I saw in the demo, partially because it rolls out its narrative in such an interesting way, and partially because ambiguity seems central to enjoying the game, much like in the first Anodyne. The demo starts with narration from two different characters, who Nova meets not long after, and who seem almost pathologically fixated on her and her journey. They return again and again to help her along or simply serve as cheerleaders, but I couldn’t shake a sense of real dread from them. Not in a “third act twist where they’re actually evil” kind of way, but more that they were my only source of information about the world, and the gaps in what they told me left plenty of room for distrust. This sense of uncanniness pervades the world.

Despite its disquieting tone, Anodyne 2 looks like it will be a very funny game. The demo is full of sight gags and off-kilter dialogue, but the whole world was suffused with the same unsettling quality as the two guide characters, that there’s something wrong here but I have no idea what. Again, this shouldn’t be much of a surprise if you’re returning from Anodyne, which itself was a masterclass in dark humor and unexplainable tension.

What I will say about the story is that your job in the game — and the reason you’re Fantastic Voyage-ing your way through its characters — is to collect Dust, a nebulously defined substance that’s polluting the world and corrupting its people. Those infected with dust seem to get angry or paranoid or obsessed, and the only way to help them is to confront the infection directly. Each person reacts differently, which is expressed in how their levels play out. Every time you shrink down, you’ll have to solve a series of one-room puzzles to get to the level’s boss, then destroy the source of Dust in the body. The puzzles will be familiar if you’ve played Anodyne, mostly revolving around manipulating enemies to open locked gates rather than outright killing them. In one instance, I had to set enemies on fire to progress, while in another I actually had to stop certain ones from getting hurt. Everything that I played was much easier than even Anodyne’s earliest dungeons, but who knows how that will change for the final game.

Combat and puzzles will live entirely in these 2D worlds, with the 3D overworld being used to move between encounters. Developer Sean Han Tani said they made that decision so that he and fellow developer Marina Kittaka could build on their experience from Anodyne and not have to create a new combat system from scratch. Given how much Anodyne was able to do with very simplistic mechanics, the decision to stick to the basics for its sequel may very well end up working in its favor.

It’s not as if the 3D portions of the game just serve as empty links between 2D worlds, either. The game’s 3D segments are all about exploration, and what I saw in the demo has me intrigued about what the final game will hold. First of all, moving around in this space is just a joy. Jumping is forgiving and floaty, actually letting you stay in the air longer if you hold the jump button while you’re falling. You can also transform into a car — for absolutely no reason that I could find — and zoom around the city. There’s a complete disregard for physics, and nothing to stop you from just launching yourself off cliffs if you so choose. It seems like every decision about movement in 3D space was made to simply let you speed through with maximum freedom. Nothing about it feels wildly inventive; it just feels right.

The demo I played was only about an hour long, and I’m eager to see where Anodyne 2 goes from here. I spent that hour in mostly confined spaces, and the demo ends with Nova heading out into the wider world. If I have any misgivings, I’m not entirely sure how well a game composed of short vignettes will maintain a good sense of pace, but those vignettes are fun for their own sake and I’m sure I’m just seeing the tip of the iceberg. Tonally and aesthetically, this game seems to be right in my wheelhouse, so if nothing else, I’m looking forward to driving around this lo-fi world and getting creeped out by its blobby inhabitants.