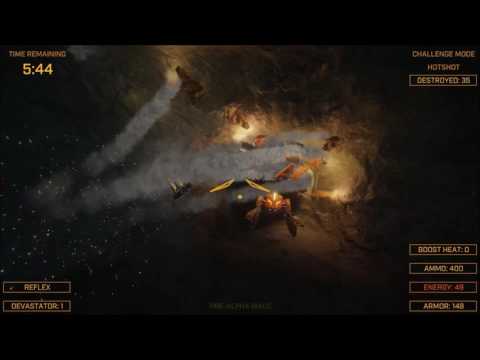 A six-degrees-of-freedom (6DoF) shooter named Descent came out in 1995. Parallax Software, the developer, went on to create the sequel, Descent II as well. Descent 3, however, was developed by Outrage Games (an off-shoot of Parallax) and launched in 2000. At PAX West 2016, I enjoyed a game called Overload which bills itself as being “from the creators of Descent.”

“What about Descent: Underground, that game currently in Early Access on Steam?” you ask. Without going into detail, the simple answer is that relationships, as they say, especially those that involve intellectual property, are complicated.

Overload is being made by a newly founded studio named Revival Productions, which was created to eliminate any conflict over the Descent IP. Revival Productions was co-founded by Mike Kulas and Matt Toschlog, the same two guys that co-founded Parallax Software many years ago. The Revival team features veterans of the Descent series among its staff, many of whom also have experience on other major game series like Saints Row, Freespace, and Red Faction. After a whirlwind, $300,000 Kickstarter that barely succeeded with under two hours left, the studio’s first project was off and running.

Here’s what Revival says about Overload:

“We can’t speak for these other [Descent: Underground] projects, but the goal on Overload has been to apply modern technology to a new game that gets to the essence of what we created 20 years ago: a tense, action-packed experience in a full six-degree-of-freedom world.”

Overload, like Descent, is a 6DoF shooter where you fly a spaceship through tight spaces and twisting tunnels, obliterating every robot in your path with a vast array of delightfully destructive weaponry. Strapped into an Oculus Rift, I sat down for my first Overload experience.

If it hadn’t been for the vastly improved graphics and updated feel of Overload, you could’ve convinced me that I was actually wearing a time machine on my head and that I was, in fact, back in the mid-nineties playing Descent again. Aside from adjusting to the addition of VR, it took me almost no time at all to pick up where I’d left off around 20 years ago.

No narrative has been announced for the 15 level single-player campaign, but whatever form the story takes, it will exist independently of Descent’s, according to Luke Schneider, Revival’s Lead Designer. A solo Challenge Mode (similar in concept to the Gears of War Horde mode), which you can see in the included videos, will ship upon release, with multiplayer estimated about six months afterward.

Forget about Descent: Underground and set your sights on Overload instead. It accurately captures the essence of Descent, bringing with it all the trappings of modern gaming (including VR support for the VIVE and the Oculus Rift), not to mention wave after wave of robots and nostalgia.

Look for the full release of Overload around Q2 of 2017. Until then, enjoy the Windows 32 or 64 bit teaser demo, or grab it from Steam here. And don’t forget to check out Gaming Trend for further updates.