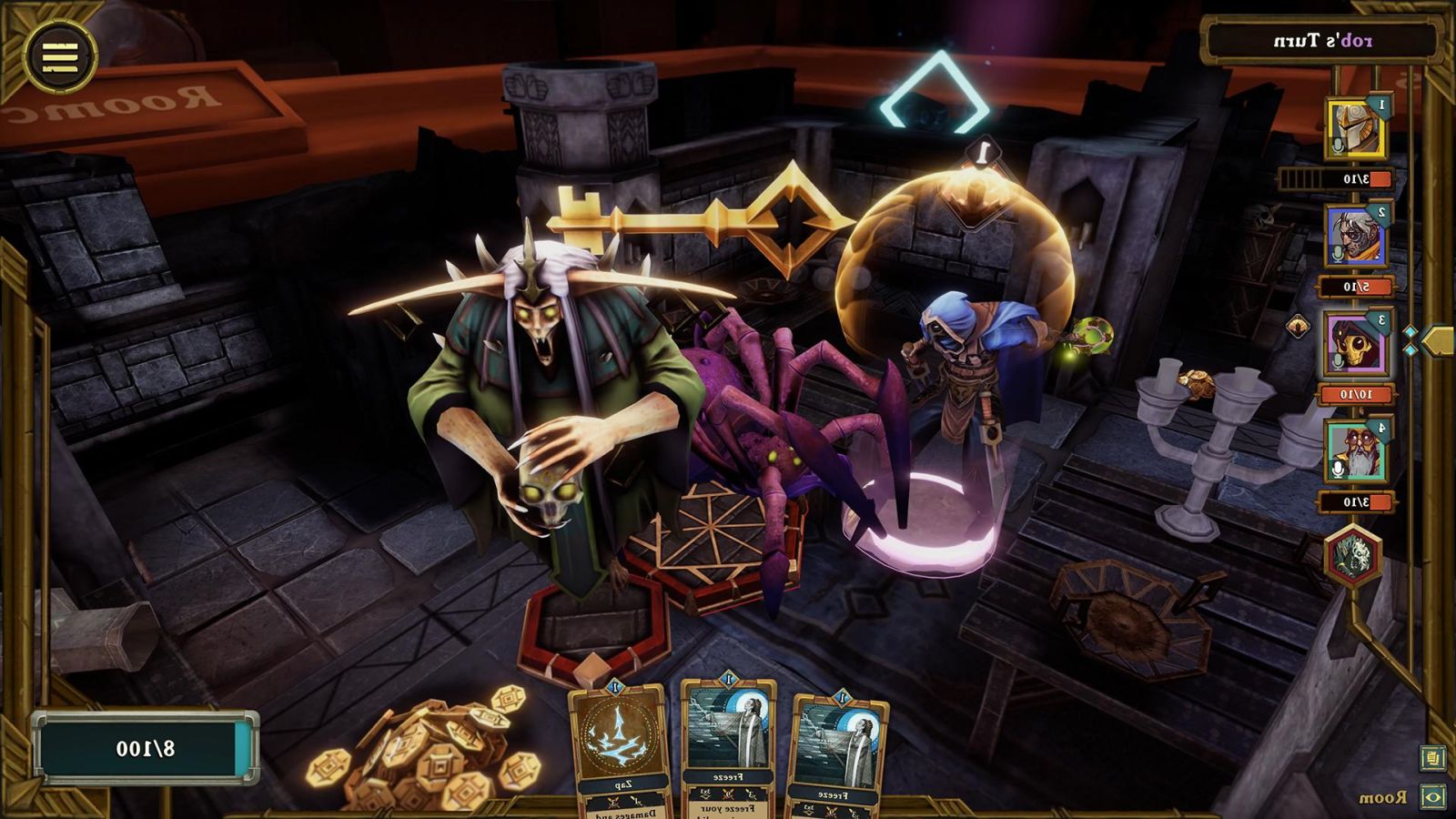 Spending just a few minutes in their recently-released Demeo: PC Edition showed me that developer Revolution Games love tabletop games. Already available in virtual reality, Demeo has now arrived on flat screens, bringing the cooperative adventure experience to PC. Better still, you can now play Demeo: PC Edition with folks on the Oculus Quest, Rift, Steam VR, mixing and matching as you see fit! Let’s get into the game and talk through what players can expect from this Early Access release.

You might be thinking “I remember Demeo coming out last year, don’t I?” and you’d be right – it was released for VR platforms in May of last year, and to rave reviews. The only real complaint that players had at launch was that folks wanted more – something Resolution Games solved with two more big campaign updates, with the promise of more on the horizon. Demeo: PC Edition reaps the benefits, shipping with all three scenarios (which are presented as D&D-like modules), and with the promise from the team to keep the VR and non-VR versions in lockstep going forward.

If you are unfamiliar with Demeo, or just tabletop gaming in general, don’t worry – the Resolution Games team took the complexities of pen and paper game mechanics and boiled them down to their simplest tactical component parts. Supporting solo play up to four players simultaneously (more on that in a few), you’ll tackle a delve in three parts. Each floor is chock full of monsters, traps, loot, and tactical decisions galore. Comprising randomized floor tile layouts and monster placements, gameplay is different every time you dive into the game, culminating in a boss battle at the end of each.

Using a slick and simple to use multiplayer system, one player hosts and then provides a four digit code to their friends. Those friends punch in that code, and bam – they are all together and ready to go. Players will then select from one of five characters, archetypes you’ve come to expect including a tank warrior, an assassin, a magic user, an archer, and a bard, and step into a dungeon as a team. Let’s dive into those classes a bit, shall we? 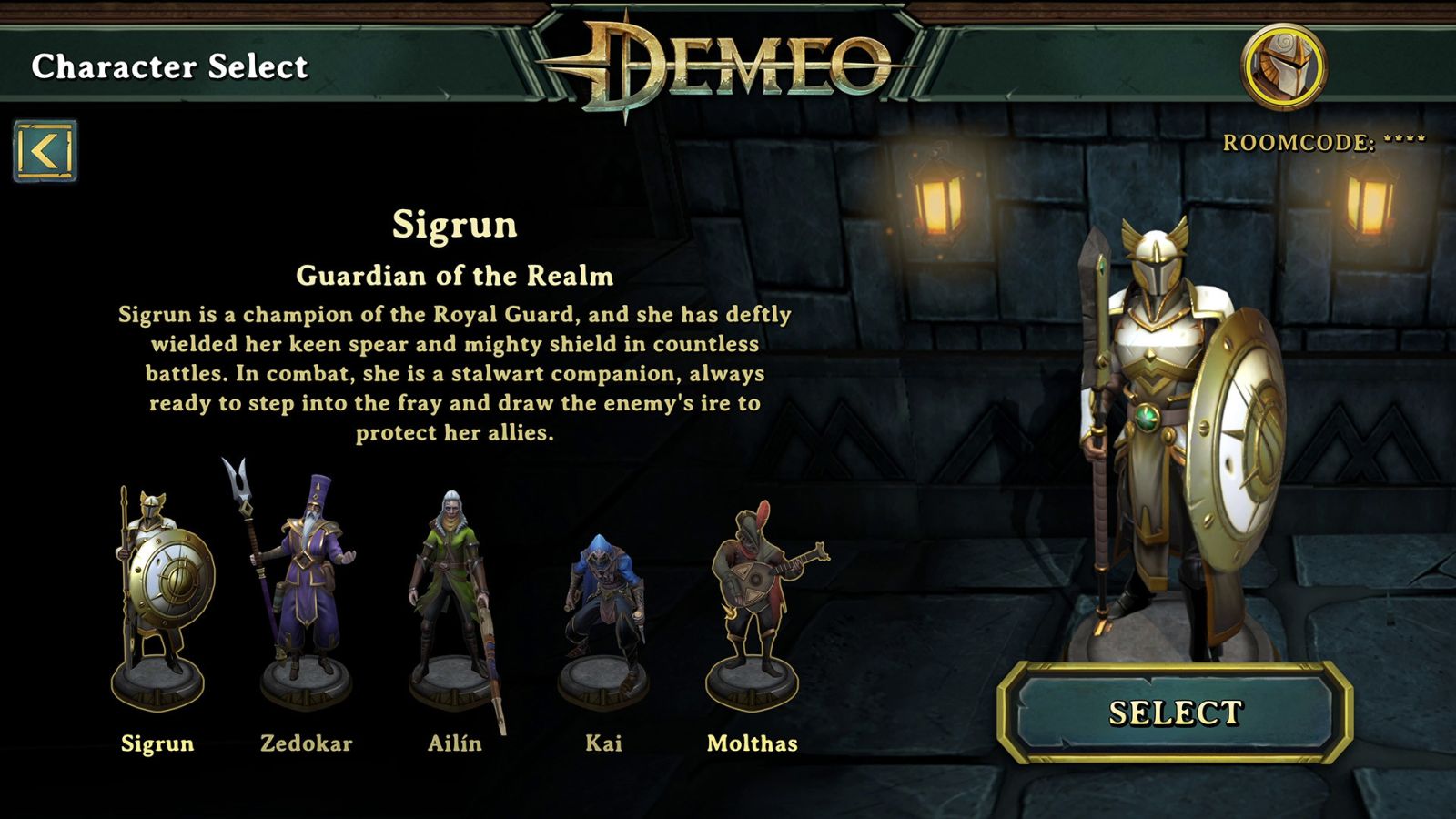 The Guardian is your tank, providing front line support for your crew. He can replenish five armor points each turn, and has a special attack that will knock enemies back a square. What looks to be the most versatile class in the game is the Assassin. He deals a tremendous amount of damage, can vanish using a sneak ability, and can passively backstab for an extra 3 damage per attack. When a lot of enemies have 4 or 6 health, that’s a ton. That said, he doesn’t absorb damage well. The Sorcerer is a support class, as you might expect, throwing out spells like fireball and freeze, but can also zap an enemy, stunning them. In practice, we found that to be extraordinarily helpful, as long as the enemy we were facing wasn’t immune to it. The last playable class was the Archer – my character for this run. She’s able to unleash arrows from a distance, with single-use attacks like a poison arrow, and some area of effect attacks. To understand combat, however, you need to look at the cards.

Combat in Demeo is accomplished with a deck of cards. Some of your character cards are single use (like the fireball, ice attack, and poison arrows I mentioned earlier), and some replenish after a specified amount of time. For example, your standard attacks likely are ready to go by the very next round, but something more powerful might require three rounds to recharge. As you deal damage, unleash traps, and otherwise just adventure as normal, you’ll fill up a mana meter in the lower right of the screen. When this hits 100, your party will “level up” and receive a card drop. This can happen mid-battle and can shift the tides completely in the case of a tough fight. Similarly, you can open chests that will grant cards mid-battle, gaining potions, cards, and more right when it might matter most. 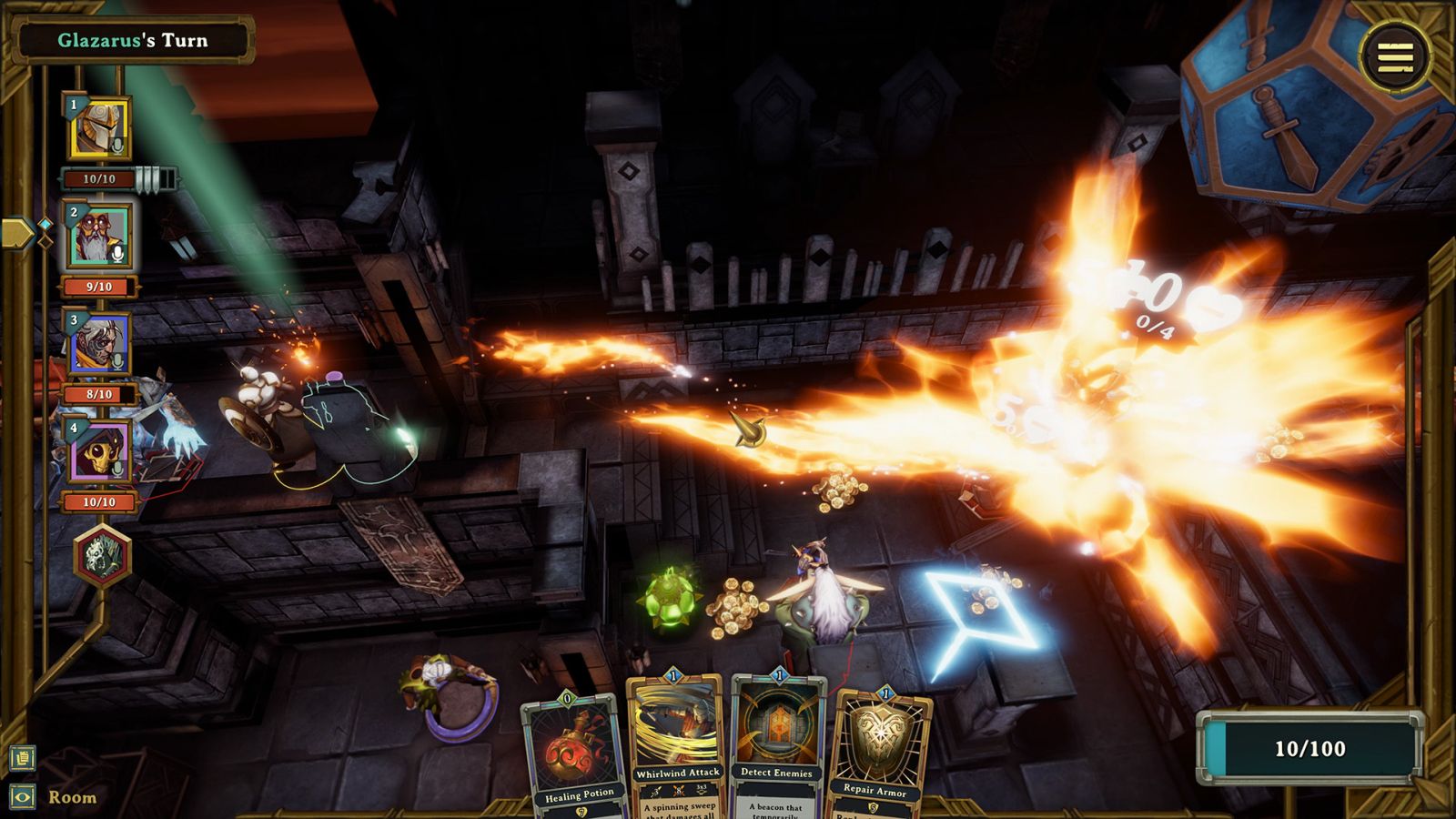 The cards in your deck have an action cost, and each character has a pool of two action points. This allows you to move twice, attack twice, or move and attack. Your cards most frequently have a cost of one, but other cards may soak both actions for a more explosive result. Resource management and timing between your team members becomes important as it can mean the difference between walking into a cluster of enemies with no actions left or wiping them out before they get the chance to respond.

One of my favorite elements in Demeo is line of sight. If you’ve played hardcore tabletop game where distance and what is visible matters, then you know where this is going. Walking into a hallway lets you see to the end, but not around the corner – those are obscured in darkness as you’ve not explored there. This can lead to emergent gameplay moments where your caster decides to momentarily step up as a scout, only to run face-first into a giant slime monster or worse. Tactical gameplay turns to terror and trauma, and everyone has a good laugh while the caster dies – good times.

There is one area that I feel like Demeo can improve, and it’s something that apparently has been an issue since the game’s VR launch – having less than 4 players. You can play the game solo, taking control of all four characters and attacking the dungeon on your own. You can also tackle the game with a full complement of four players, reaping the benefits of four hopefully tactical minds. It’s the bit in the middle that stings. Sure, you can play the game with two or three players, but when you do so you’ll be dropping one or two characters out of your party entirely. Rather than letting one player take control over an additional toon, the game unceremoniously shoves you into the dank dungeon with just a single character for each player. This makes the game far more difficult, and in the half dozen attempts my wife and I made, a woefully unsuccessful one. We had fun, but at some point you’ll want to win, right? The solution is simple – let us take the same approach as the single player skirmish mode and let us command more than one class as needed. 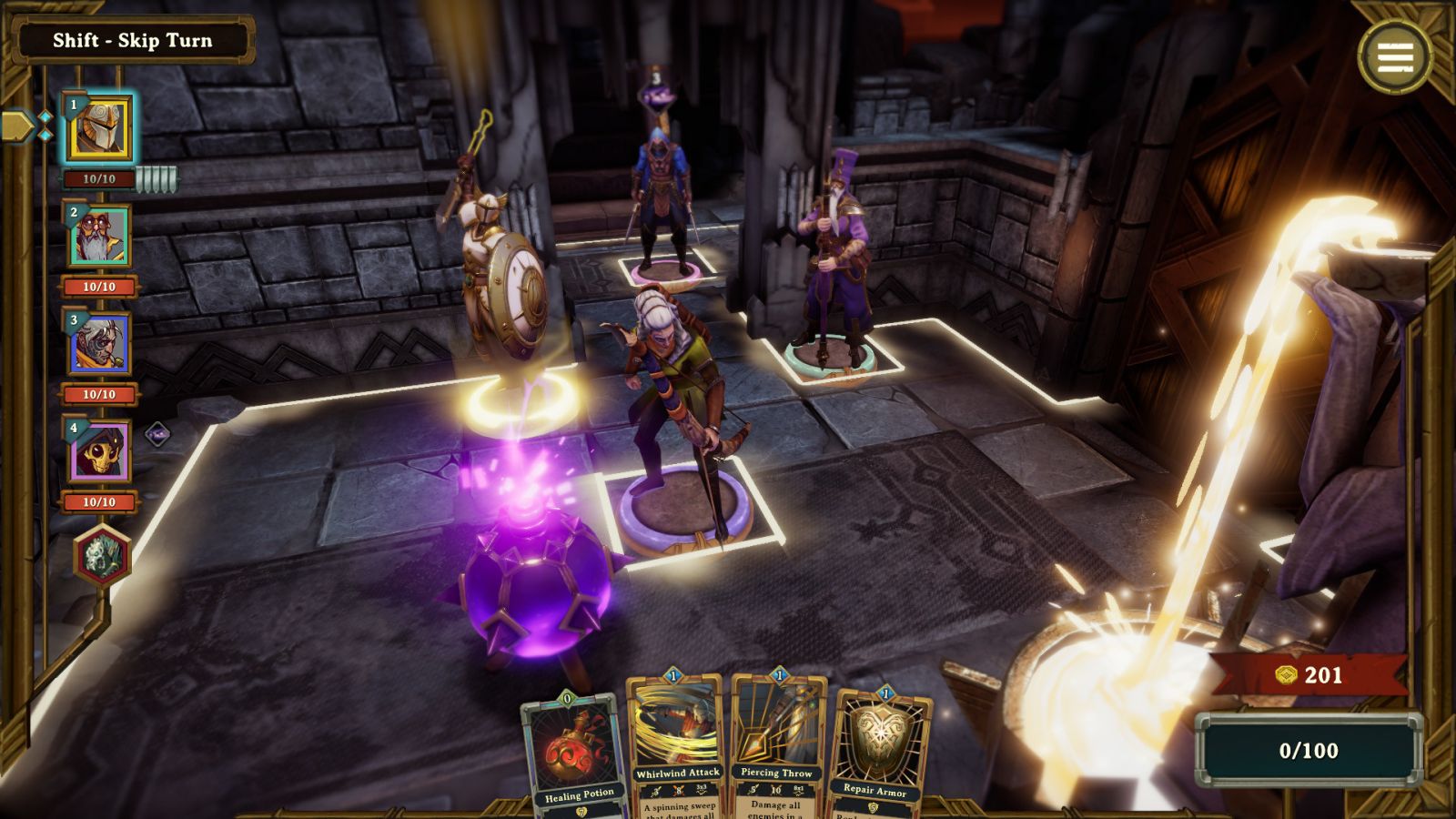 While Demeo: PC Edition is labeled as Early Access, there’s nothing here to indicate that. It’s feature complete, bug free as far as I could see, and feels balanced when you play with a full team. It’s likely the team has a few more aces up their sleeves, with new features and modules waiting just around the corner. Based on how much fun the game is already, it’s exciting to see a developer as eager to make it even better as Resolution Games clearly are. We’ll be playing the title as it works its way through Early Access, so reach out if you want to team up, and stay tuned for additional coverage right here at Gaming Trend.