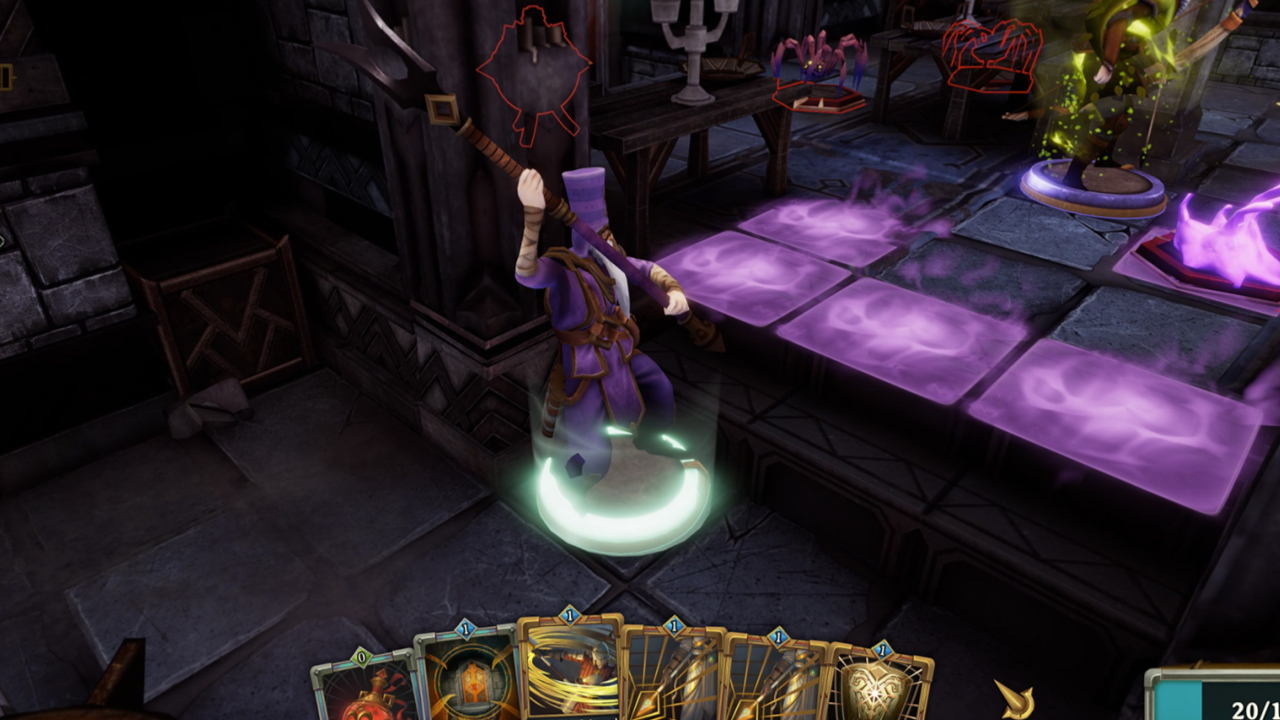 I missed Demeo when it hit VR back in May of last year, and after getting to play the upcoming PC version with the development team at Resolution Games, it’s clear I missed out on a fantastic experience. The VR-only tabletop simulator was met with very positive reviews, and now the team wants to bring the cooperative adventure experience to flat screens with cross-play for up to four players both in and out of VR. Let’s dig in and see how the game translates from the virtual world. 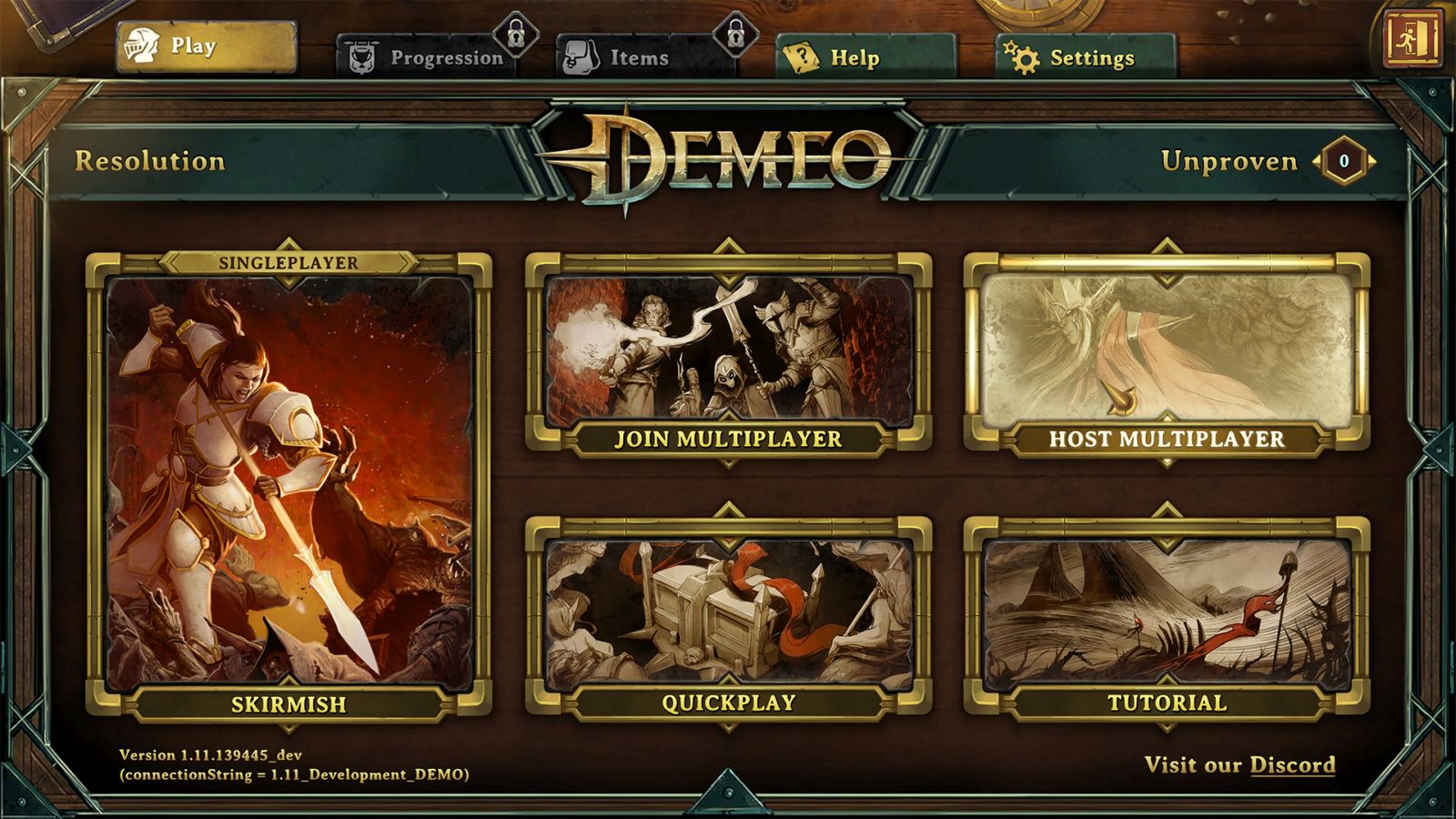 Meeting up with Gustav Stenmark and Paweł Pilacki of Resolution Games, and Nathan Stevens from Digital Chumps, we tackled one floor from the first adventure that’ll ship with the full game – The Black Sarcophagus. If you are unfamiliar with Demeo, the game puts the player into randomized dungeon scenarios containing three floors and a boss. Those floors are built from several tile layouts, with the monsters, challenges, and rewards being different every time, but it always culminates in a huge boss battle at the end.

As I mentioned, Demeo shipped on VR platforms last year, but the team saw a huge opportunity for crossplay to expand the game’s audience. They wanted to replicate the feeling of pen and paper role playing games like Dungeons & Dragons, with very tactile engagements like physically picking up and moving pieces and dice rolls. Translating these actions, as well as camera movement, to mouse and keyboard brings nearly that same feeling of physically touching all of these incredibly detailed pieces to life in a way few games have managed to pull off. Within minutes of starting the game, I knew I was gonna play this thing to death. 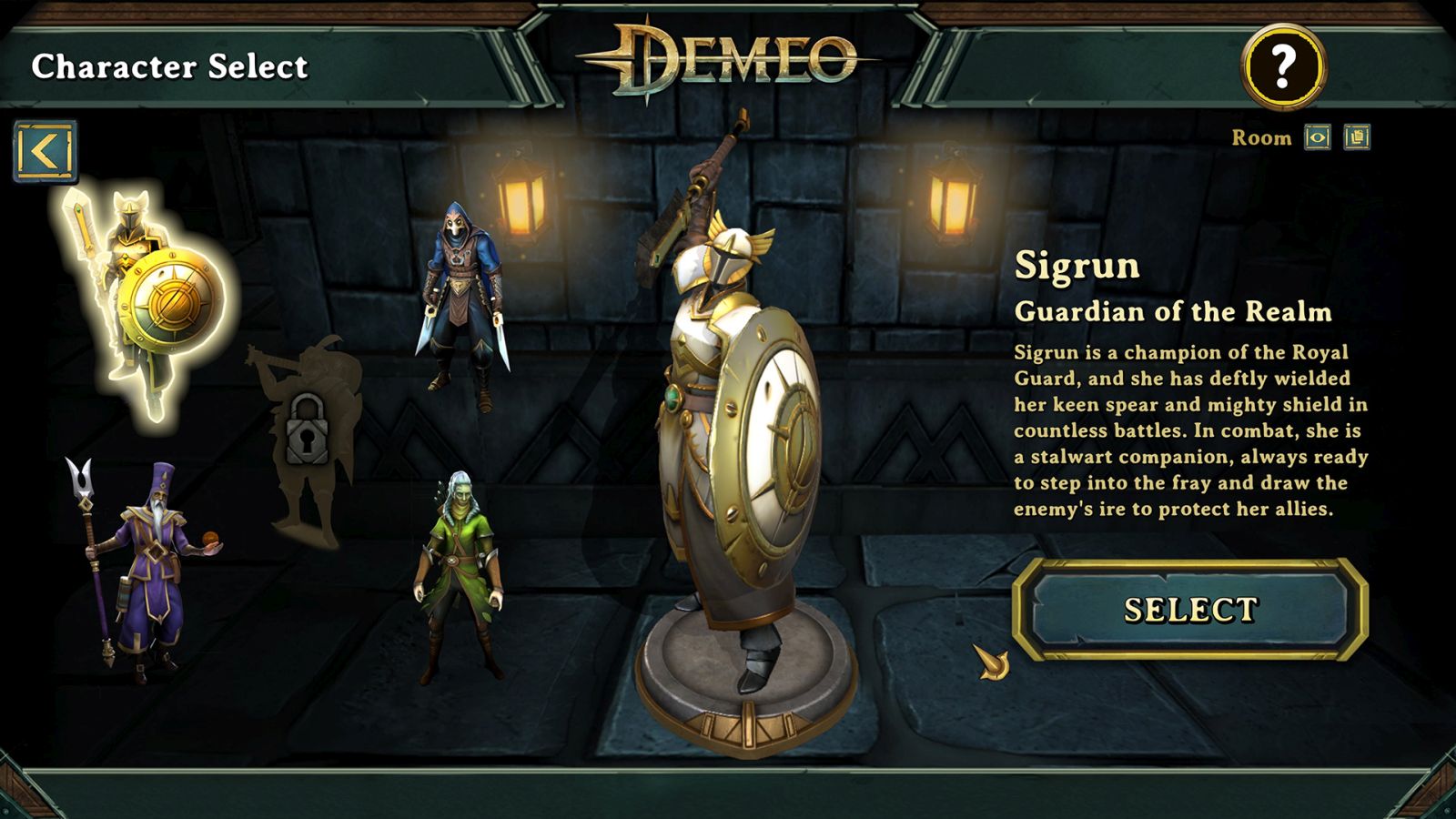 Heading into the dungeon is incredibly easy with Demeo. One player hosts the game, providing a four digit code to their friends, which allows them to join with just a few button clicks – it’s incredibly simple, and it works flawlessly. From there, you’ll pick your character – there are five to choose from, though only four will be available in the upcoming demo. Let’s take a closer look at them.

The Guardian is your tank, providing front line support for your crew. He can replenish five armor points each turn, and has a special attack that will knock enemies back a square. What looks to be the most versatile class in the game is the Assassin. He deals a tremendous amount of damage, can vanish using a sneak ability, and can passively backstab for an extra 3 damage per attack. When a lot of enemies have 4 or 6 health, that’s a ton. That said, he doesn’t absorb damage well. The Sorcerer is a support class, as you might expect, throwing out spells like fireball and freeze, but can also zap an enemy, stunning them. In practice, we found that to be extraordinarily helpful, as long as the enemy we were facing weren’t immune to it. The last playable class was the Archer – my character for this run. She’s able to unleash arrows from a distance, with single-use attacks like a poison arrow, and some area of effect attacks. To understand combat, however, you need to look at the cards.

Combat in Demeo is accomplished with a deck of cards. Some of your character cards are single use (like the fireball, ice attack, and poison arrows I mentioned earlier), and some replenish after a specified amount of time. For example, your standard attacks likely are ready to go by the very next round, but something more powerful might require three rounds to recharge. As you deal damage, unleash traps, and otherwise just adventure as normal, you’ll fill up a mana meter in the lower right of the screen. When this hits 100, your party will “level up” and receive a card drop. This can happen mid-battle and can shift the tides completely in the case of a tough fight. Similarly, you can open chests that will grant cards mid-battle, gaining potions, cards, and more right when it might matter most. 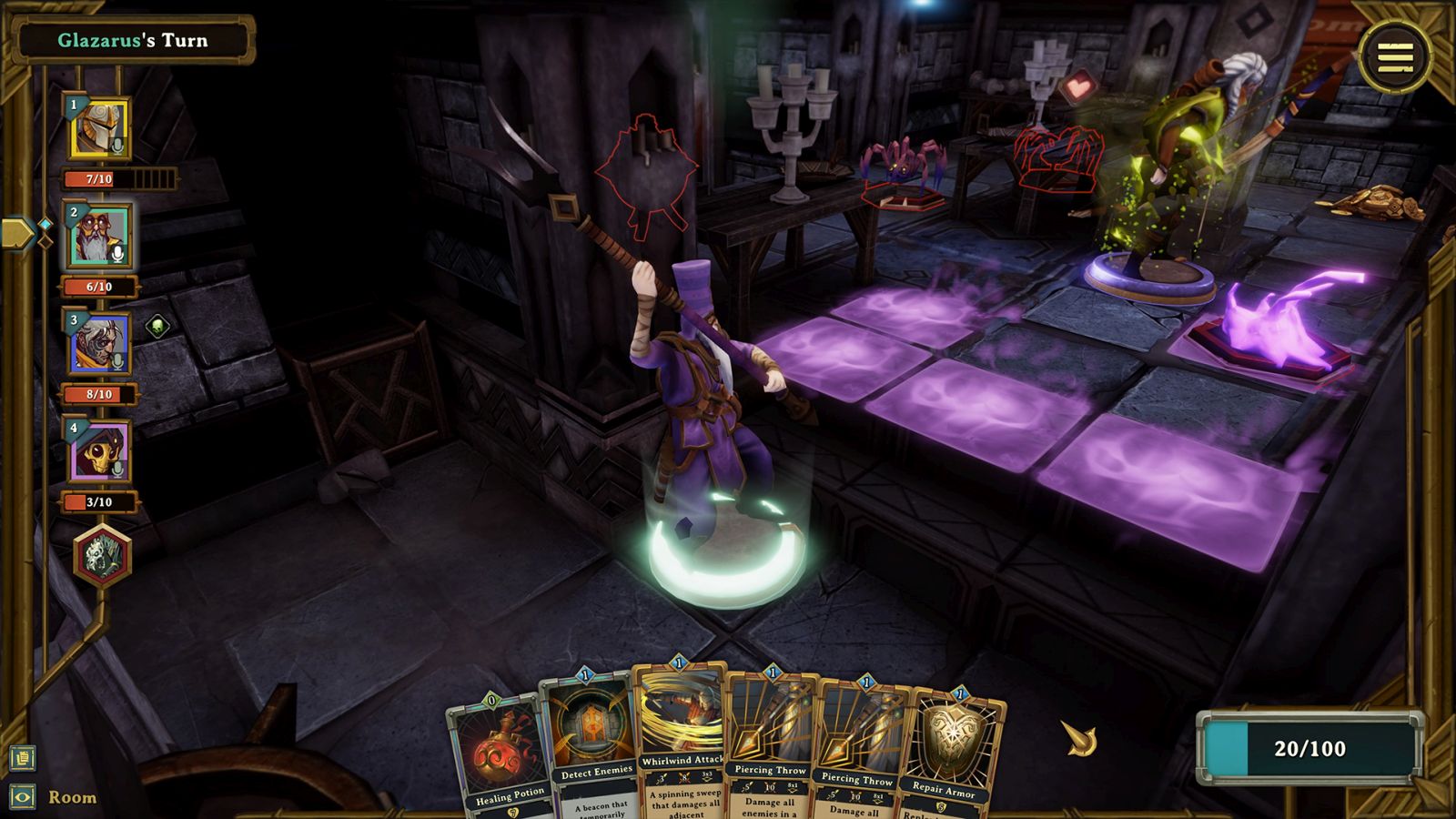 Demeo is turn based just like a tabletop game, but the other players are free to move the camera around the space. Darkness will still obscure enemies, and you won’t see beyond areas you haven’t explored, of course, but you can take the time to plan out your approach. You can also use your mouse to draw on the board, as well as integrated voice chat to plan your next attack. In just a few turns, we were falling into our designated roles and planning our attacks just like we would in a tabletop game – it was awesome.

Just like a pen and paper game, line of sight and fog of war are a big part of how effective you’ll be in combat. The various stages in the game are often multi-layered, so line of sight can also mean elevation and distance – something I was able to exploit frequently with my Hunter class. It makes the concept of having a scout viable. On more than one occasion we rounded a corner onto to run face first into a contingent of angry goblins or a monster-generating rat warren spewing rodents everywhere. Line of sight works both ways, of course, and can be lost if an enemy ducks down a hallway, so plan accordingly. 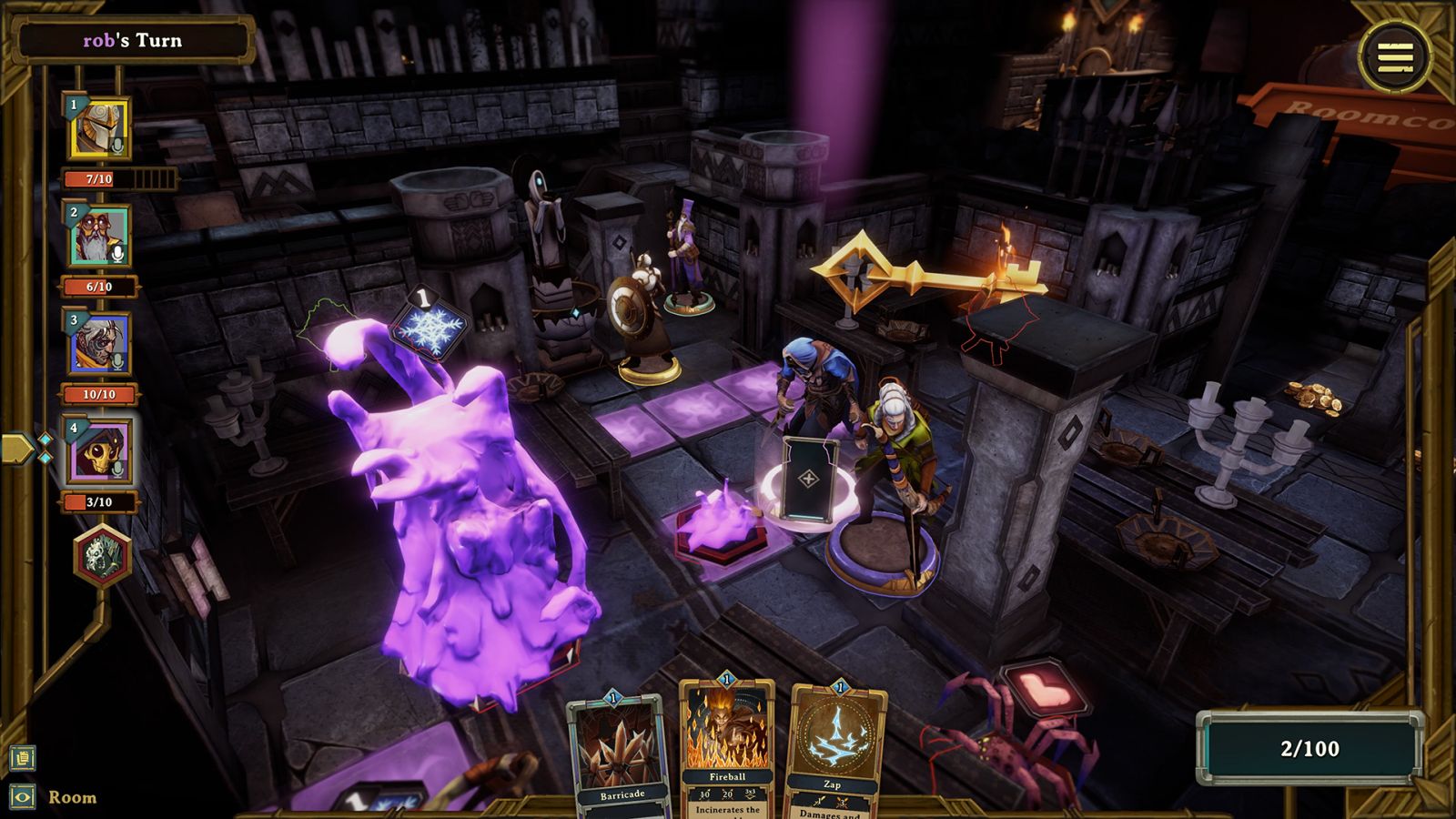 The cards in your deck have an action cost, and each character has a pool of two action points. This allows you to move twice, attack twice, or move and attack. Your cards most frequently have a cost of one, but other cards may soak both actions for a more explosive result. Resource management and timing between your team members becomes important as it can mean the difference between walking into a cluster of enemies with no actions left, or wiping them out before they get the chance to respond.

Back in the dungeon, I saw a great deal of potential for coordinated attacks. Traps work both ways, so kiting a group of enemies (or dropping a lure card) into a poison explosive whittled their health down each round. Our Sorcerer whipping a fireball into that same room dissipated the foul poison, allowing us to pass safely. These sorts of emergent gameplay moments and randomization elements should keep us coming back again and again. 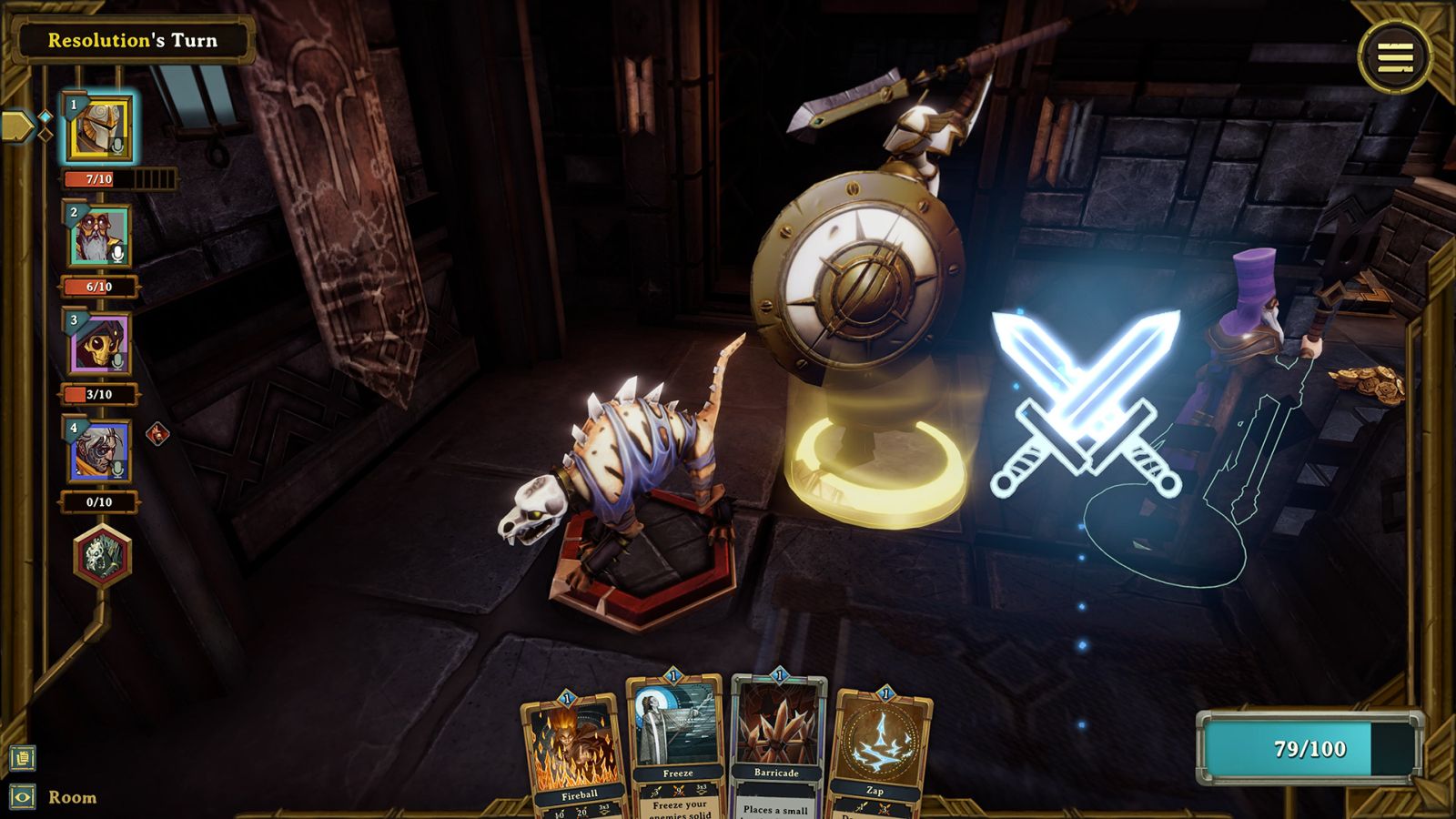 I have to take a moment and recognize Conor Souness, the UX Designer for Resolution Games. He and the team have built a user interface that is incredibly simple to grasp with no instructions whatsoever. It’s completely pickup and play, easily understood by gamers and non-gamers alike.

The demo you’ll get to play as part of Steam Next Fest on February 21st will feature one floor of a dungeon – just enough to whet your appetite. While the cross-play won’t be available yet, it will show you how the game has been translated to PC. After that you won’t have long to wait as the game will launch into Steam Early Access on April 7th. 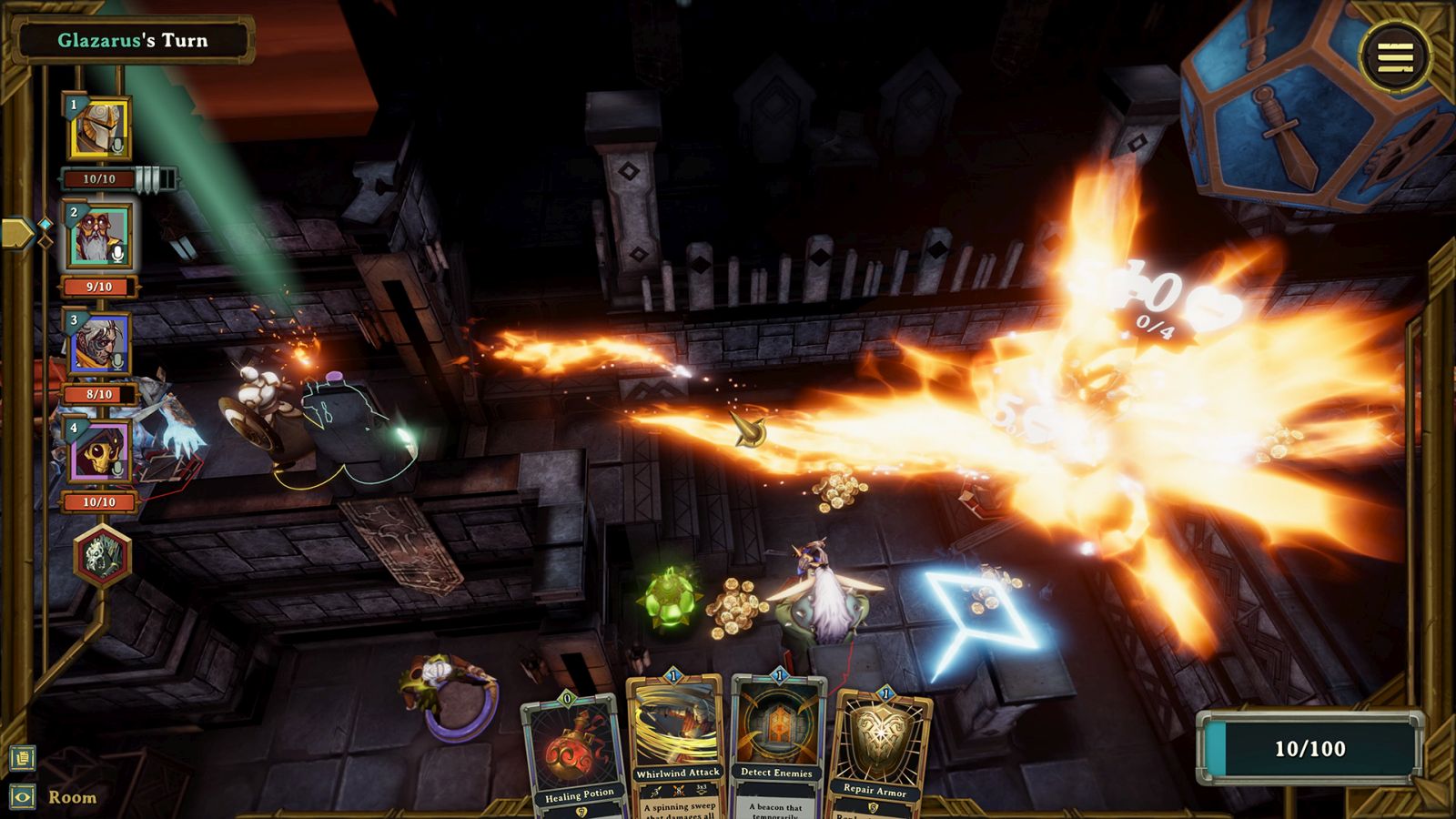 But wait, you might say, this game has already launched on VR – why Early Access? Well, it’s good that you asked! A new Player Hangout will be introduced into the VR version (and presumably headed to the PC version as well) where you can showcase your trophies and achievements, as well as hang out with your friends. If you are into abusing those friends, at some point in 2022 we’ll also see the launch of PVP content, allowing you to go head to head in an all out arena brawl. If you aren’t into clobbering your pals, there’s also two more entire modules awaiting us this year. It’s clear that Resolution Games is just getting started.

Look for our continued coverage as we roll up to launch – I suspect Resolution Games has a few more tricks up their sleeves, and we’ll be sure to cover it right here at Gaming Trend.