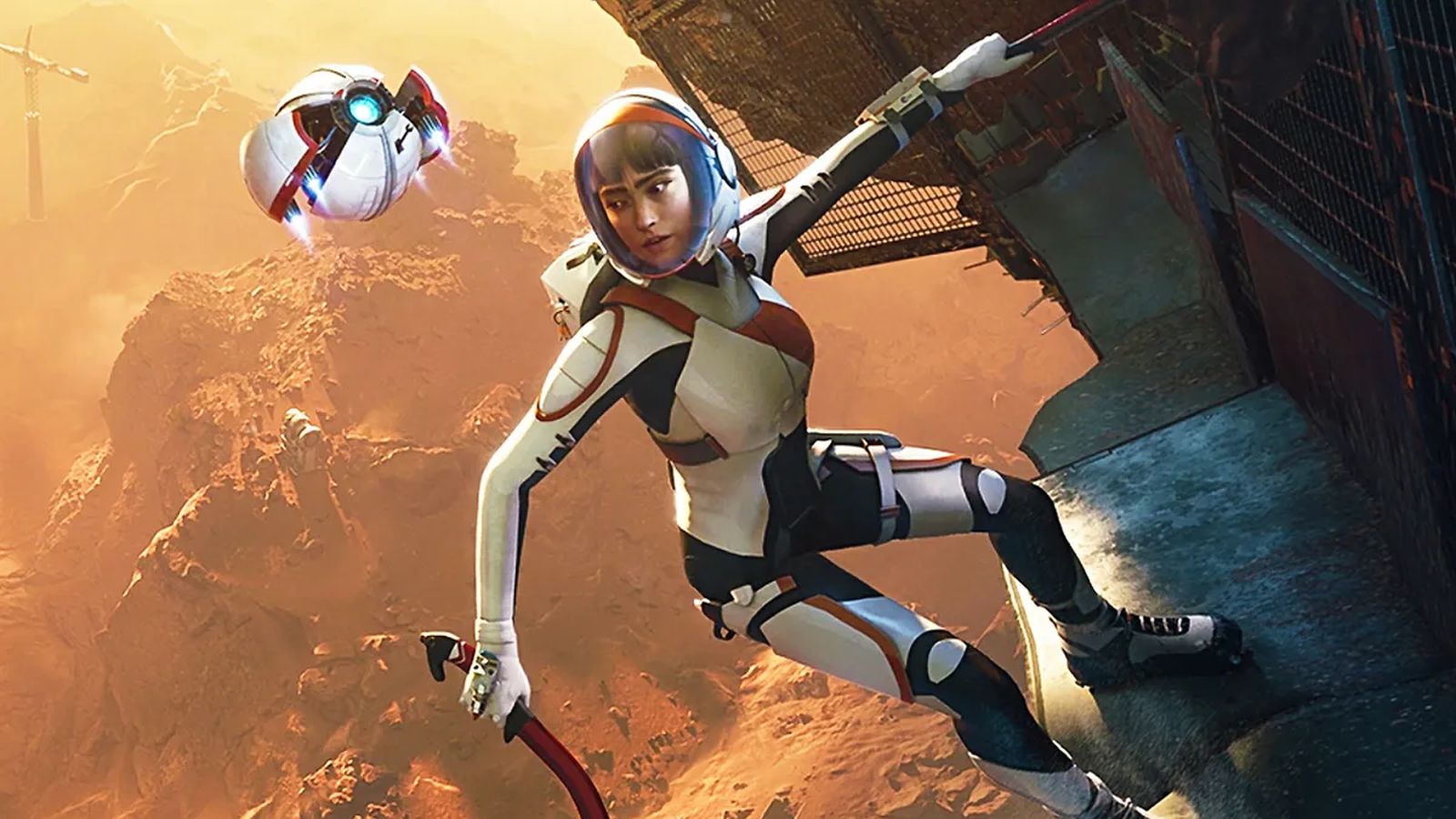 Deliver Us Mars hands-on preview — Mars is there, waiting to be reached.

Deliver Us Mars, the sequel to the excellent Deliver Us The Moon, is right around the corner and we’ve gotten to go hands-on with a near-final version of the game ahead of its February release. Playing for about two hours, we had unfettered access to a number of new systems, devious puzzles, and the start of a brand new and deeply personal story. As always, we’ll be light on story spoilers – let’s begin.

Deliver Us Mars tells the story of Kathy Johanson, a scientist and astronaut responding to a distress signal sent from Mars. Mars is where research on reversing climate change and recolonization is occurring in giant colonization ships called ARKs. Given the state of the Earth, it’s vital that Kathy and her team discover what has gone wrong and retrieve these ARKs before it’s too late. Launching in the space ship Zephyr with her crew, Kathy has another objective – she wants to know why her father Isaac has abandoned her and her mother, heading to Mars without them. Who is this mysterious group that he joined called Outward, and what is their interest in Mars? Unfortunately, before she can locate her father, some sort of calamity occurs, and Kathy finds herself and her crew stranded on the surface of the red planet. More than just saving the world, this is a deeply personal story for Kathy, and it’s also where our hands-on time begins. 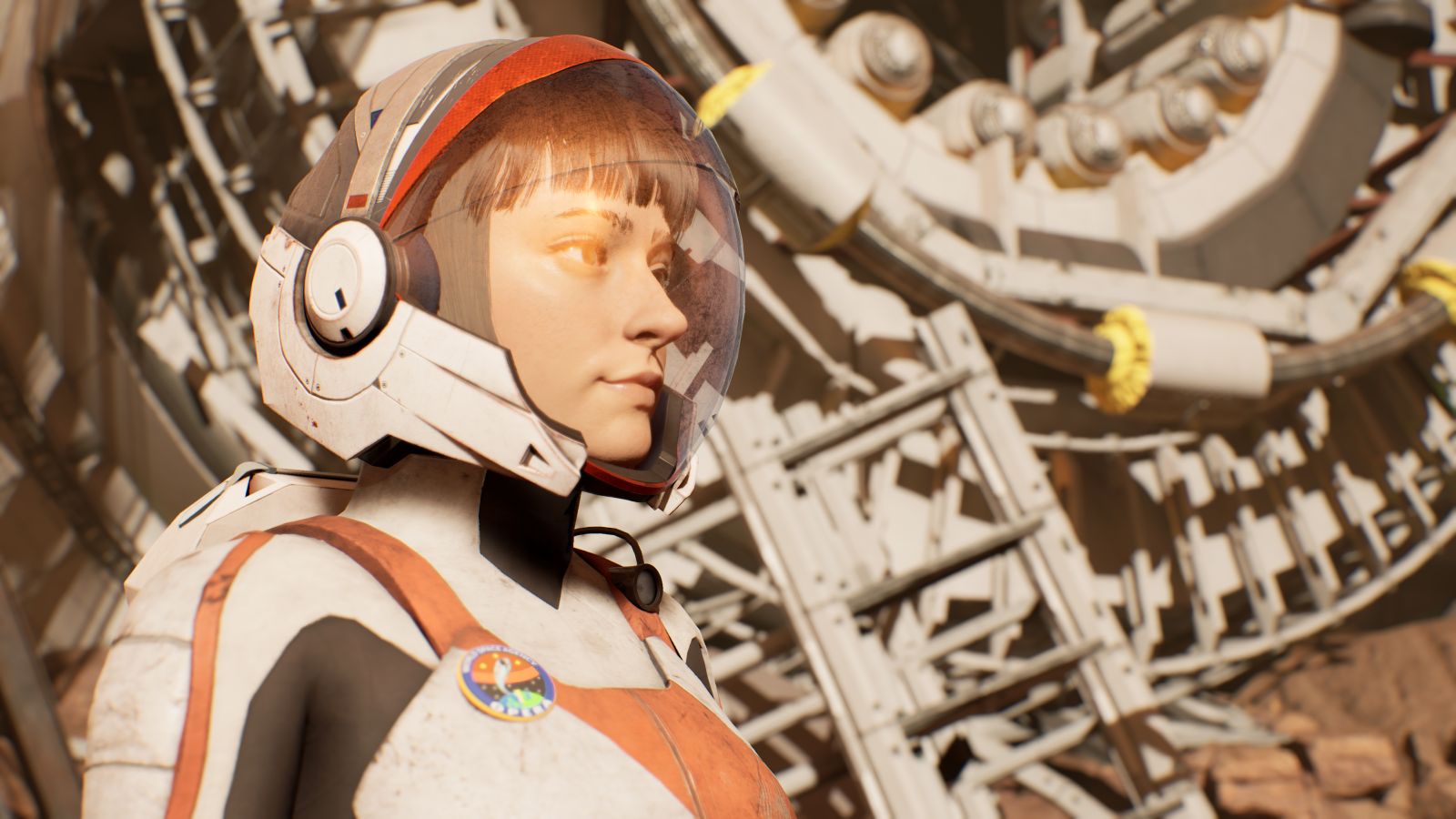 We checked out two areas of the game, both several hours into the storyline. Starting off we see Kathy in some sort of space station facility. Her robot companion AYLA hovering ever-present by her side, Kathy starts to investigate her surroundings. Replaying a memory stored in an Astrotool, a sort of echo of the past, she learns that her father was more integral to the experiments of this place than was previously believed. Crossing a nearby catwalk, we hit our first puzzle.

Kathy needs to find some antibiotics and a nearby medical lab with a pharmacy would be the best place to find them. While the inciting event happened off-screen before our hands-on time, it’s clear that it’s important so we need to get through that door. Using a wrist-mounted laser we cut the latches on a door, revealing a laser on an extensible articulated arm. We’d need to get that laser to a nearby interface, but we wouldn’t be able to do that without bending it to our will. Flying AYLA through a nearby vent and opening the door, we found a splitter on a tripod that would prove to be the solution. 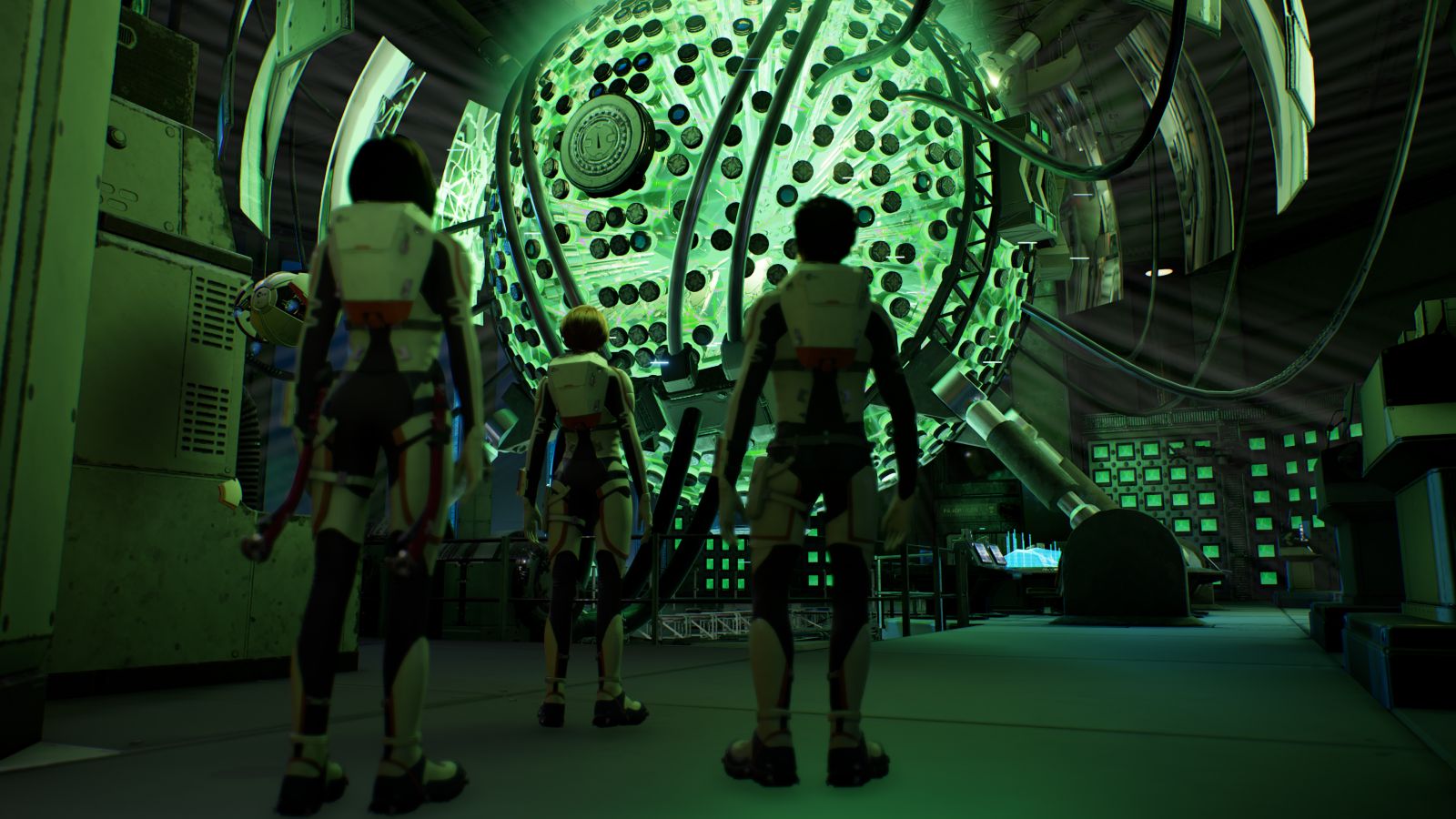 Each laser splitter can be angled to hit two targets. Using the first laser to round the corner, I aimed the first half at the overhead receiver. The door opened, as expected, but when I used the second splitter to hit the second angle, I found that the laser was receiving too much power. Using a nearby diffusion panel, I was able to cut the laser output by slipping into the stream. Indicated by a pink wedge on the power indicator changing back to blue.

Aiming one of the lasers at the nearby power port for a door, we could now open the freshly-powered portal, revealing the needed antibiotics, as well as a second splitter device. Opening the second door, one of our crew shows up and grabs the meds we need, leaving us to do a little bit of recon work. As the door slid open, I was faced with my next obstacle – something far more dangerous. 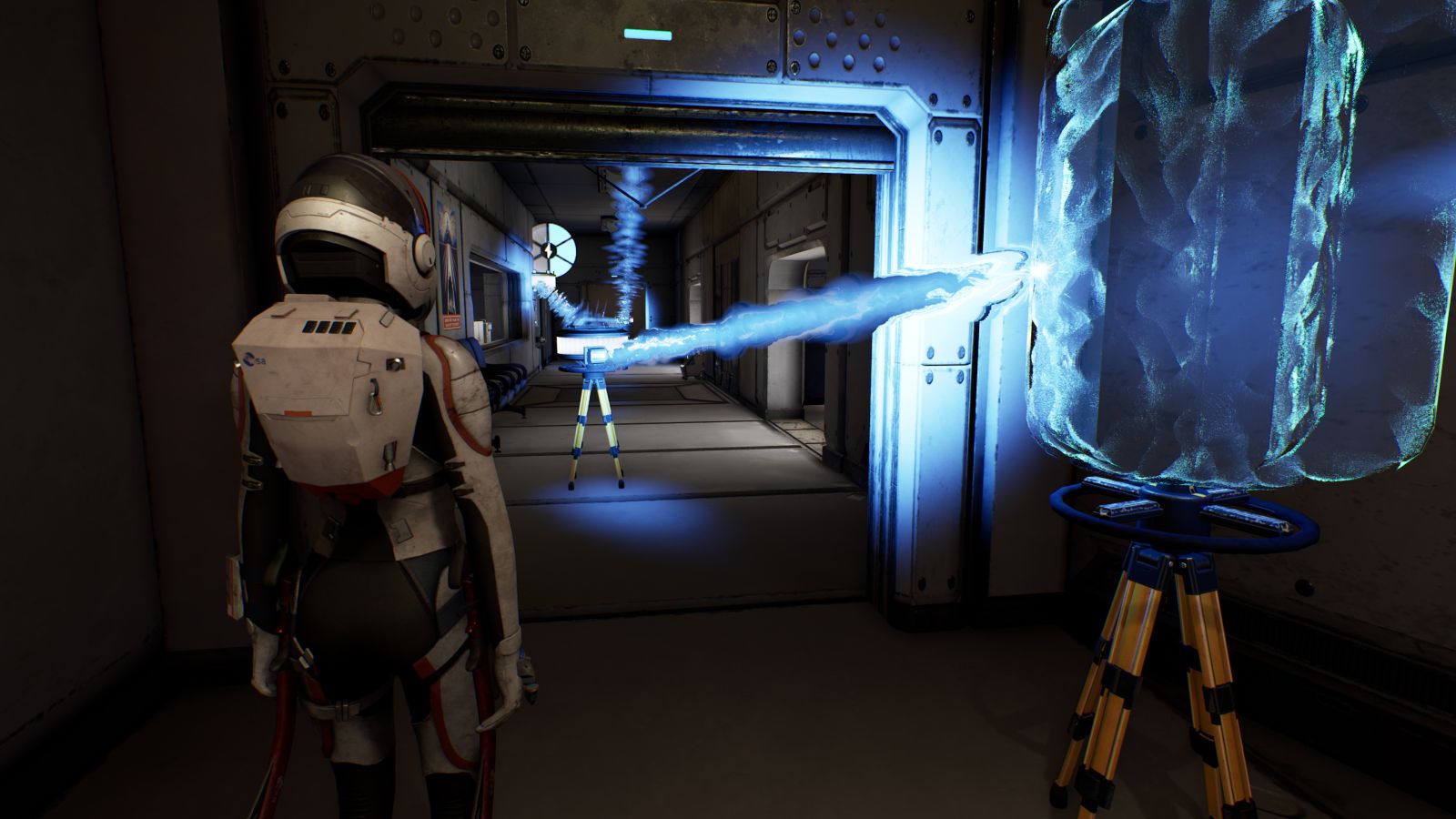 One of the big improvements to the formula is verticality, and Deliver Us Mars has it in spades. Equipped with a pair of climbing axes gifted by her father, Kathy is able to scale soft padding in walls. While we didn’t see it in our time with the game thus far, this also extends to other surfaces as well. I have to say that climbing, of all things, ended up being a real highlight for me.

When you jump on a climbable surface you’ll hold down both mouse buttons to keep your left and right axe embedded in the surface. Pulling your left axe loose means letting go of the left mouse button. You’ll then position your left arm, and consequently your body, re-sinking the axe to secure it. You can then free the right hand, ambling your way across the surface. This left, right, left, right movement is tactile and engaging in a way I didn’t expect. On more than one occasion I had to save my own skin as a surface crumbled under my feet, leaving me hanging by my grip strength alone. I don’t know how this plays out on a console controller, but on a mouse it’s easily the most fun I’ve had climbing. Odd to say, but there it is. 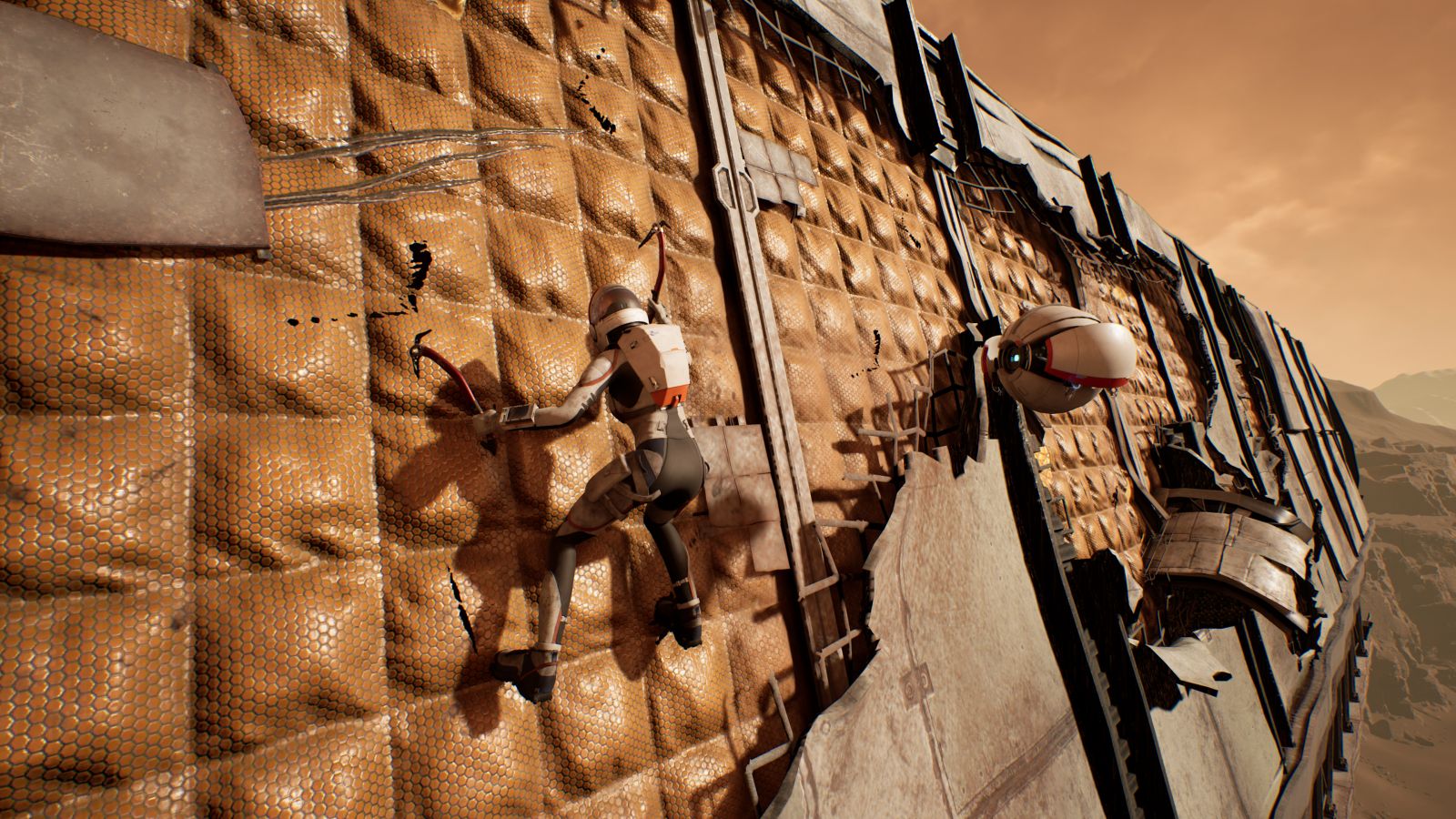 Jumping ahead I found myself behind the wheel of a sand rover. In the distance lies what I can only imagine is the ship we were supposed to arrive in, spread across the desert sands in pieces. We’d need to get inside this hulking behemoth to try to get a signal back to Earth for rescue, but that proved to be more problematic than anticipated.

Much of the now-derelict spacecraft was locked down, electrical sparks belying deeper damage that would keep much of the structure sealed. We’d need to get to the cockpit to fire up this mystery craft to send the signal, but naturally that’s the furthest ship section from the lowest point sunk in the sand. Ambling across jagged steel outcroppings and climbing what remains of the interior we make our way to what appears to be the central power core. Powered down, we’d need to get this device spinning again to regain access to the ship controls. 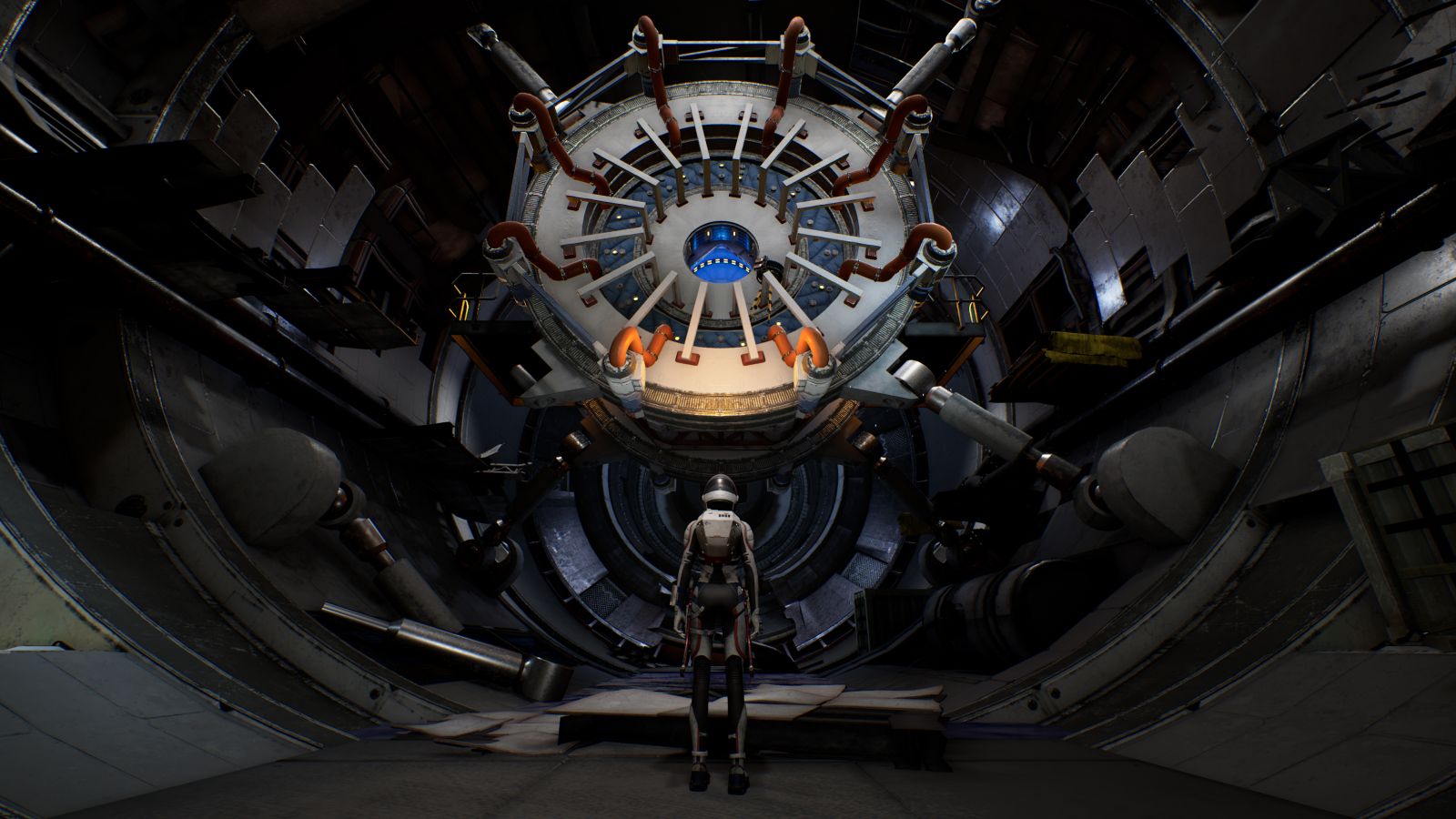 Using my wrist cutter I once again freed a laser emitter. I don’t want to ruin the puzzle solution but it involves some ingenious light bending, culminating in a nearby door slowly creaking open. Passing through I could see the cockpit in the distance…or at least I could until the whole superstructure shifted under my feet. Evoking the best Tomb Raider moments, I managed to save my own skin (and once again, I’m not going to ruin it for you), leaping across what remains of the ship and reaching the cockpit by the skin of my teeth. Powering up the laser I was able to at least send a signal to a nearby tower, ending my time with the hands-on demo.

Deliver us the Moon was no slouch visually, often an early go-to for RTX lighting and visual fidelity. Deliver Us Mars meets and exceeds that bar, adding motion captured cutscenes and movements to the equation and to impressive effect. That said, the team at KeokeN are aiming to hit Steam Deck verification on day 1, as well as shooting for 60fps on Xbox S and X, and PlayStation 5. PC, naturally, will get all the frames. Like its predecessor, Deliver Us Mars will have real time ray-traced shadows and reflections, provided you have an RTX-capable card to take full advantage.

What was immediately clear after my time with Deliver Us Mars is that developer KeokeN Interactive is once again pulling out all of the stops. The game is a visual treat, the new vertical design and heavier focus on storytelling is engaging, and I can’t wait to see where the story goes. Thankfully, none of us will have to wait long as Deliver Us Mars ships on PC, PlayStation 4 and 5, Xbox One, on Xbox Series X and S on February 2nd, 2023.

Deliver Us Mars hands-on preview — Mars is there, waiting to be reached.