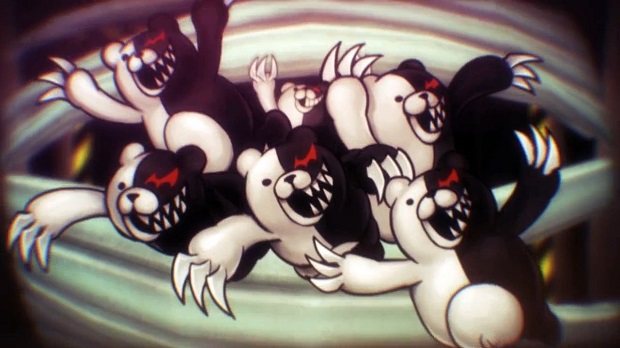 What the world of Danganronpa looks like outside the walls of Hope’s Peak Academy has been often spoken of, but never before seen.

A world ruined by despair, where people are being slaughtered in the streets on a daily basis.

This world, and the people behind its desecrated state, have been shrouded in ambiguity since the first game’s cliffhanger ending.

But that’s all about to change with Ultra Despair Girls: Danganronpa: Another Episode.

Another Episode casts players in the role of Komaru Naegi, the sister of series’ main protagonist Makoto Naegi. Rather than being forced into a game in which she has to solve murder mysteries like the original series, Another Episode is a third-person shooter that has its young hero fighting for her life in Towa City, which has been overrun by children using robots made to look like Monokuma (the series’ sadistic teddy-bear mascot) to kill adults.

In the brief time I was able to spend with the game, Another Episode appears to be Danganronpa at its most harrowing.

Within the first five minutes of the game, Komaru is ambushed by a vicious Monokuma, and sees it maim members of a peace-seeking organization called the Future Foundation led by returning character Byakuya Togami.

As she makes her escape, gruesome images of Monokuma bots relentlessly butchering the people of Towa City are seen, all juxtaposed against the series’ signature pink blood.

The dark story of Another Episode doesn’t end with the mindless killing of Towa City’s adult population. In my time with the game, I met the game’s true villains behind the Monokuma called the Soldiers of Hope. These five kids, all elementary school aged, serve as the real antagonists of the game. They operate believing that they will be able to make the world a paradise for children, one no longer plagued by adults, or as they like to call them, demons.

Also making an appearance in the game is what appears to be returning character Nagito Komaeda from Danganronpa 2 (but series producer Yoshinori Terasawa isn’t so sure about that) under the name “The Servant.” His screen time was brief, but even in those few moments, Nagito managed to steal the show with his own brand of hope-fueled manipulation.

Komaru fights the waves of Monokuma she encounters throughout Towa City with a gun that resembles a megaphone. You’ll get different bullet sets with different functions as the game goes on, some with combat uses, others which are meant for puzzle solving. As different versions of Monokuma are introduced as the game goes on, you’ll have to quickly alternate between different ammo types in order to best handle the robotic bears.

The actual pointing and shooting of Another Episode is serviceable for the Vita, but still came off as somewhat stiff due to the fact that the Vita’s analog sticks don’t have quite the same amount of leverage and precision of its console counterparts, and slightly shaky due to some tricky automated camera movements that can hinder your line of sight. The game thankfully doesn’t emphasize accuracy, but does reward you by making Monokuma’s “evil eye” the bear’s weak point that, when shot, results in an instant kill.

Komaru is accompanied by returning character Toko Fukawa, who has gained a semblance of control over her dissociative identity disorder, and is able to bring out her alternate personality, the serial killer Genocide Jill, at any time she pleases. Players can switch control over to Jill to get a brief period of invulnerability and scissor-based attacks that do great deals of damage. This is useful in moments where the player gets overwhelmed, but has a duration that keeps you from using it repeatedly.

Whether or not Danganronpa can successfully execute third-person shooting with the same level of mastery that it does its murder mystery remains to be seen, but what is clear from my time with Another Episode is that the series’ incredible story remains intact, and is being prepped to be shown in a way that we’ve only seen glimpses of so far.

I’m ready to see this despair-ridden world with my own eyes.

Ultra Despair Girls: Danganronpa: Another Episode is coming to PlayStation Vita this fall.

For more on Danganronpa, check out our spoilercast where we discuss the first two games.