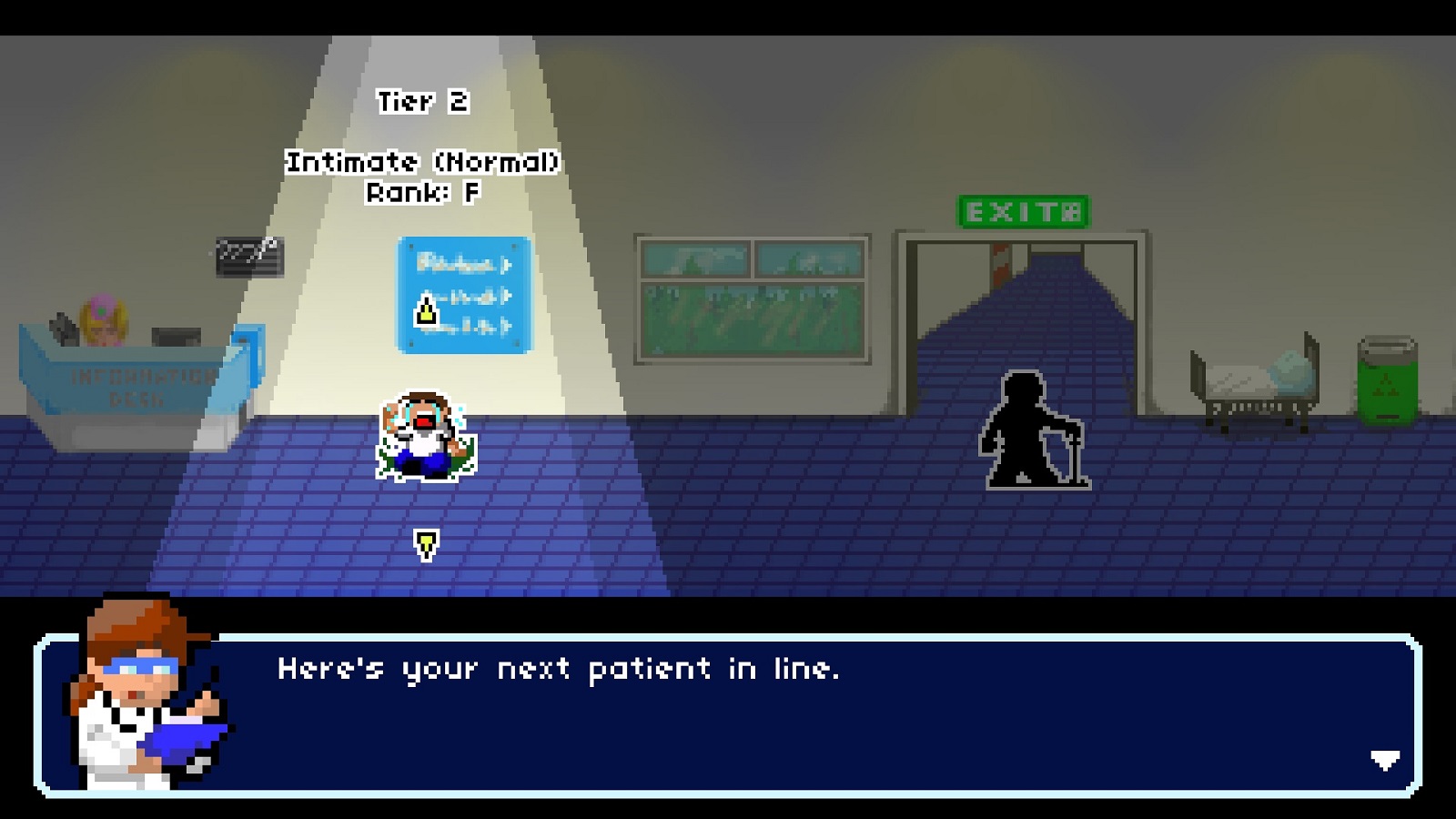 I’m always in the mood for wacky, weird, and wonderful rhythm games: the crazier the better, I always say. In recent memory, I’ve been entertained by the Rhythm Heaven franchise, an inexplicable collection of rhythmic minigames that can only come from from the makers of Warioware. Likewise, 7th Beat Games announced its game Rhythm Doctor for PC next year and I got to play a short demo. A simple premise with a killer soundtrack and challenging difficulty, I can say without a doubt it’s an indie that every music game fan should try out.

Like some of the best rhythm games out there, Rhythm Doctor starts out silly: you have to help patients through the power of music and your sense of timing. Most stages operate on seven beats, where all you need to do is press the spacebar on the seventh beat in time with the music. This seems simple enough, but the game takes this premise and turns it upside down, fries it in an omelet, and hits the club faster than you can shake a stick at it. And if that metaphor was incomprehensible, that’s because it is.

And it is GLORIOUS.

You see, playing Rhythm Doctor reminded me of the original Rhythm Tengoku, the last official Game Boy Advance game released in Japan. While it wasn’t officially released stateside, the game is easy enough to understand (and it’s import-friendly due to the region-free handheld). What separated Rhythm Tengoku was the graphical art style as well as the crushing difficulty and timing. Rhythm Doctor follows suit, offering some pretty pixel art (which runs reliably on pretty much any computer or laptop) and some insane timing. Hitting any beat early or late will cause you to miss, and you’ll have to adapt to the stages quickly lest you perish or fail your mission.

You’ll also have to listen to audio cues rather than rely on visual ones, as a lot of the stages have ways of screwing with your vision, leading you to learn rhythms on the fly. While unforgiving, in time you end up learning time signatures and layout of the stages, so you can power through each of them with a bit of practice. This was intentional due to the developer’s desire to make people learn music theory while playing, and while it won’t make you a musical genius by the end, you’ll pick up a few rhythmic techniques that can help you out at your next jam session. This does mean that newcomers might get a little frustrated at the game (especially on stages with a lot of on-screen distractions), but rhythm game veterans will find a lot to love here. The music is greatly varied, with traditional Japanese, techno, and light pop music represented within the demo.

The demo features four single-player stages, each of which is a remarkably different scenario. The first stage feels like an odd samurai number, where you have to operate through a remote connection. (The situation is as weird as you think it is.) the basic seven beat gameplay is hindered by interference due to a “Wi-Fi jamming virus” affecting your screen, and you’ll have to keep a steady beat in order for your patient to survive. The fourth stage is a harder variation of this one, but includes much more interface screw and a consequently catchier track. You can watch some footage of an earlier demo build below, and tap along if you prefer.

The second stage was my favorite of the whole experience. The screen shrinks and actually moves during the song, thus hopping around your desktop. It’s a visually ambitious task, but it works very well and adds to the immersion of the stage. This stage changes the seven-beat gameplay to a two-beat one, but it’s just as complex due to the screen shaking everywhere. I loved this gimmick, and I haven’t been this impressed with interface abuse since a certain fight in Undertale. It’s something that I wonder how the developers will recreate with other platform ports, and the track is a techno-laden joy to listen to.

The third stage is a lighthearted ballad featuring one of the main characters, and acts as a call-and-response piece, with a nurse busily attending to patients. The seven-beat gameplay is back, but now you have to contend with four characters rather than one, with backbeats and different timing signatures present throughout the song. It feels like a karaoke number where you have to respond on the last beat of each line, but since each line is sung differently, you might want to check out the visuals here (which aren’t impeded by any hindrances this time around). Doing well enough during the song will unlock a playable epilogue after the stage that acts as a good ending ala Elite Beat Agents. Overall, this was a pretty cool number that suffered a tad with the inclusion of voice acting, which sounded bored and uninspired. I’m guessing the developers voiced the characters themselves, and it really shows here. However, the singing vocals (compared to regular speaking roles) were pretty good.

If you have another rhythm game obsessed buddy, you can also try out co-op stages. The gameplay is similar, but this time you have two players navigating two lanes, with blue and red colors signifying which person should hit the beat, as well as the left and right shift key rather than the spacebar getting pressed. It’s a mode that can feel tacked on (being the weekday loner I am, I actually did these stages solo using both buttons), but different music in stages could be an incentive to try this out. It does help that the demo has a stage exclusive to this mode, which is a little cute duet with two patients.

The biggest flaw right now with Rhythm Doctor is with giving moment-to-moment feedback. Much like the Rhythm Heaven series, you don’t know the result of stage three until the end of it (which could be rectified by a score or a “how many beats you missed” number). While the other stages do have health bars to signify player and boss health, because of the nature of the game, it’s difficult to determine your progress (and in the case of stage one and four, the boss health bar will replenish without warning multiple times, so you can’t depend on it to note where you are in the song). It would be nice to see if there was a way to view progression within a stage without downright failing it.

One last mode to note is the inclusion of a level editor, where you can make your own charts to any music files you might own. It’s an adequate editor, with features such as changing BPM and adding beats with different characters in up to four lanes, but I was too inexperienced with it and didn’t make much out of my preview. I can imagine some virtuosos scheming up some great custom songs, however.

Aside from some minor faults that can be fixed in future builds, Rhythm Doctor is going to be an indie on my must-play list next year. I was surprised with The Metronomicon in 2016 and Aliens Go Home Run this year, so this might an indie sleeper hit next year