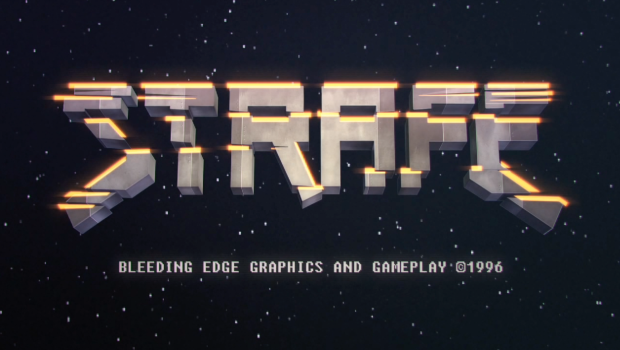 My demo for STRAFE took place in a sun-beaten parking lot on day three of E3 (well, show floor day three, anyways). Inside a dimly lit trailer, with a fog machine blowing haze over a massive TV screen, I played a run of the game on an odd mixture of a modern gaming mouse and a retro Dell mechanical keyboard, slightly tinted with age. As a portrait of John Stamos circa Full House era gazed upon me, I went through the first motions and started my run.

This might all seem meaningless detail, but it’s an environment that STRAFE strives in — a nostalgic glance of the past, with modern takes to invigorate the formula. The developers didn’t shy away from the immediate Quake references; the game was a major inspiration for STRAFE, but the pixelated look and roguelike mechanics add variety to a game type that’s been “figured out.”

At the start of each run, you’re given the option of an assault rifle, shotgun or railgun. After selecting your gun, you jump into a teleporter and into a derelict vessel, brimming with angry aliens who want to rip your face off. The objective? Make it to the other end of the level, face-intact.

The mechanical keyboard was the kind of tool I earned my wings on in original Quake, so within seconds I found my natural rhythm of hopping and strafing around. This is as much a credit to developers Pixel Titans as it is to Dell — the mechanics here feel solid, familiar, and still finds ways to surprise. In the jumps, it’s an added level of control mid-air, as you can slightly alter your course mid-bunny-hop, making it easier to avoid that pool of acidic blood you accidentally just dove headfirst towards.

Guns have a good feel as well, and there’s plenty of options for new weapons to be found and old ones to be upgraded. At one upgrade station, I gave my shotgun fragmentation grenade rounds, adding a lot of punch but the added danger of self-damage. I appreciated the former, even as my health bar slowly succumbed to the latter. Other guns found by myself and other players during our slot time included a rocket launcher, plasma rifle, and assault rifle, all adding a new aspect of destruction to our arsenal. Little touches take it even further, like when you run out of ammo with the rocket launcher. Once your rocket supply depletes, your unnamed scrapper flips it over and wields it like a bat, which you can use to slug an alien out of the park before swapping back to your primary.

The tutorial for STRAFE, which we were guided through at the start of our demo, oozes even more of that throwback style, as an FMV of an attractive scientist walks you through a training process for becoming a scrapper. Your whole job is to collect scrap for a monolithic corporation, and as such, you’re treated as both special and expendable in what can only be described as one of my favorite tutorials in recent memory. Frankly, any tutorial that goes from a tongue-in-cheek FMV segment to a pixelated track reminiscent of Rocky is fine by me.

Roguelike elements come into play in the random seeding, which changes up the layout of each level every time you start a new run. While roguelike elements in a game trying to emulate Quake might sound odd, they add some much-needed variety, without going overboard on random seeds. Room layouts tend to appear in similar spaces with different layouts; you might run through the same room countless times throughout your STRAFE playtime, but enter and exit in many different ways, with different enemies and item layouts changing it up as well.

You can also use scrap, picked up environmentally, to buy armor and ammo, adding more strategy to how you blitz through each room. The developers told us about their work on a teleporter as well, allowing you to jump ahead to certain areas of runs after making enough progress.

This isn’t the most diehard, concentrated version of a Quake nostalgia-trip; it’s diluted, mixed with other ideas, but in a way that makes STRAFE feel fresher and more exciting than any Quake wannabe I’ve played since my early days of CTF and nailguns. STRAFE is a promising game, one that can attract both the speedrunners and Quake diehards, while giving the younger generation a reason to get into the fast-paced, high-octane shooter that spawned a genre.

Look for more on STRAFE throughout the year, as it’s set for early 2017 on PC.