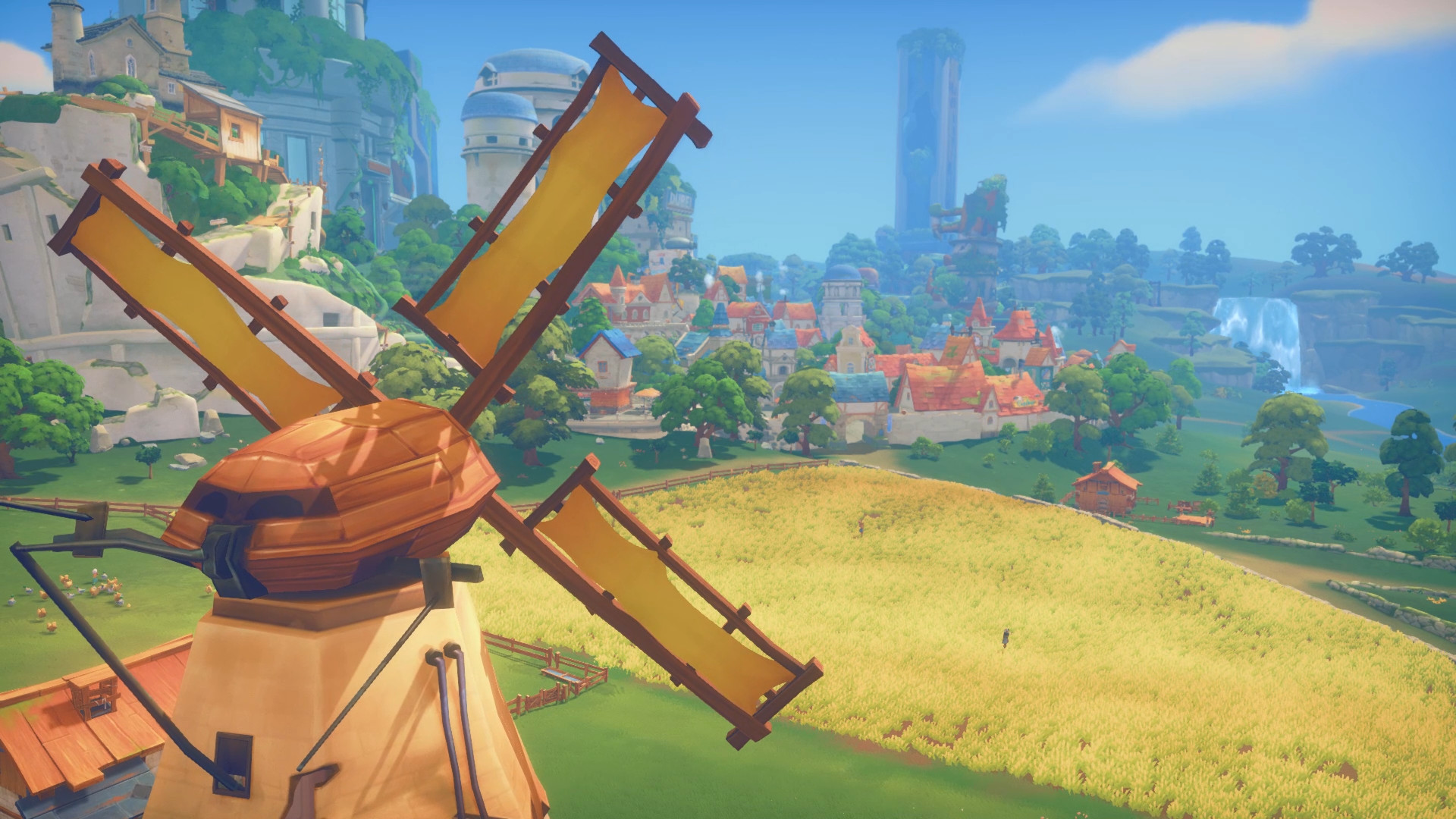 Making a full, robust simulation game is no small feat, as many an ambitious developer has discovered. The challenges around developing enough characters to fill a decently sized town, creating enough dialogue to support friendships, romances, and even marriage are monumental. Pair that with the need to populate item descriptions, balance gameplay, time management, and income, and doing all this while keeping a game with so many facets bug-free has halted product development on a number of games and left others under perpetual development. I was cautiously optimistic when I jumped into My Time at Portia, a simulation game inspired by Harvest Moon, Animal Crossing, and Studio Ghibli, and I was unprepared for its polish and ambition.

My Time at Portia tells the story of a young person, played and named by you, who inherits their father’s old builder shop in a town called Portia. This frontier town is large and populated by a huge, diverse cast of characters, it’s also surrounded by huge areas to explore, dungeons to mine and fight in, rivers you can fish in, and is populated with a huge, diverse cast of characters. Some of the town’s residents are aloof, some are sickly, some are socially awkward, one is a bear. An actual bear. Who wears a blue bathrobe.

What’s even more impressive is how the world, and the story of that world, continues to evolve. Having invested more than 100 hours into My Time at Portia, I’m still uncovering new story quests and new places to explore. I was 60 hours into the game before I had met the entire cast of characters available to me. Not only that, but the majority of characters are eligible to date and marry. I was impressed by the sheer range of bachelors and bachelorettes I could date, and all were options, regardless of the sex of the playable character.

My Time at Portia centers around not a run-down farm, but a run-down builder’s workshop, where you’ll use various tools, smelters, grinders, and assembly stations to create appliances, resources, home goods, clothing, decorations, weapons, and all other manner of products to improve your workshop and meet the needs of the people of Portia. Your worship is one of a handful of workshops in the city, and by completing quests during the week, you’ll be able to improve your workshop’s ranking, grow your popularity with the town, and even score the top spot in the monthly competition based upon completing requested jobs, netting useful items and a stack of sweet, sweet cash.

Understanding the building system is easily the most difficult part of this game. It took me a solid five hours of gameplay to fully understand how to progress. It’s not overly difficult; it’s just a little tricky and not explained as clearly as it could be. Understanding which parts are created at which workstation, figuring out how to work the building station itself, and learning how to actually harvest resources and artifacts from the mine (more on that later!) are all challenging. Once I got the grasp of the game, I decided to start over and I finished up what had taken me an in-game month, about five hours of real-world time, to accomplish during my first playthrough in a single week. It’s a bit of a tough learning curve, but more than worth the challenge; this is an incredibly robust, well fleshed-out, and very pretty game.

The world inside of My Time at Portia is steeped in history, a history which have meaningful impacts on your time in the game. The horizon is filled with the ruins of ancient technologies and skyscrapers, technologies which have been lost to humanity after a great disaster. There are two distinct factions within the city when it comes to ancient technology: those who want to learn from the past, using relics from the old world to build machines, and the church, which fears history repeating itself and wants to abolish the use of all ancient tech. You’ll likely find yourself making good friends with the pro-technology crew, as you’re going to be needing to work with them in order to upgrade your shop and complete a number of quests, however you’ll need to trade in bits of tech to the church if you want to deck out your garden.

On top of the lush, Studio Ghibli-inspired aboveground world which you are free to explore, you’ll also be spending a decent amount of time belowground and in dungeons. Dungeons allow you to engage in hack-and-slash style combat against a variety of goofy looking enemies, often for story purposes. Some of these bosses are quite difficult, with one story boss in particular being far more difficult than I expected. The controls are responsive, though they feel a little soft and floaty for my liking.

The mines, on the other hand, are a delightful nod to the good old days of tunneling through mines in certain other games where you harvested crops, often under a moon, if you get what I’m saying. My Time at Portia ratchets this mechanic up several notches, allowing you to actually dig a massive tunnel system through the caves. While you can just slam your pickaxe into rocks over and over again in order to harvest rocks, sand, and ore to craft with, you can also use a Relic Scanner to identify bits of ancient technology lost within the mine. This was one of the trickier mechanics to master, but once you lock onto a relic, represented by a point of light, you’re able to use it as a guide and tunnel towards it, tunneling either vertically or horizontally. Some relics can be assembled into decorations you can place within your house for stat boosts, while others will be put to use building larger machines inside your workshop.

Let's Play! My Time at Portia

You’ll also be able to fish, farm, and cook. These systems are all rather simplified, and until you’re able to invest enough coin to mass purchase bait, your fishing habits are going to be a little restricted, but it’s a delightful way to waste some time in the lovely little world. Farming consists of building a planter box, dropping in season-appropriate seeds, and then waiting, while topping off fertilizer as need be, at least until you’re able to automate these processes. It’s pretty low maintenance, and an excellent way to stock your storage bins with food for cooking.

Cooking functions differently from all the other crafting stations, where you select a desired outcome, put in the necessary ingredients, and wait for the machine to spit the finished item out. Cooking functions much more like it does in Breath of the Wild, but without any clear indication of what you have and haven’t dropped in. I’ve ruined countless meals because I doubled up on an item due to not realizing I’d dropped two of an ingredient in.

One unique feature that I very much appreciated was the fact that each character has their own group of friends, and if you increase friendship with one character, then their entire circle of friends will start to think more highly of you, and their friendliness towards you will passively increase. There are no rival marriages, so you won’t have to worry about rushing to settle down before your dream boat sails away, but some characters are vocal about their affections for others.

In addition to the usual methods of raising friendship — talking, giving gifts, and completing requests — you can raise affections in several other ways, including sparring and playing a game of rock, paper, scissors. Once your friendship is high enough, you can even go on a playdate, and eventually a real date with villagers. This involves roaming around the map to certain key spots, where you can chit-chat, play games, and even watch fireworks together. It’s an impressively robust relationship system, which even extends to animals around the city, allowing you to adopt a stray pet or two. Befriending townsfolk is not only good for the soul; depending on the character, building a friendship can come with added benefits, including store discounts and stat boosts.

My Time at Portia is still in Early Access on Steam, but it’s shockingly complete and stable. It comes with holiday celebrations, cutscenes and voice acting, though a few characters are missing a couple of lines. I did experience the occasional glitch, one of which I actually found incredibly helpful when I was in the mines (see my livestream above), but I did not experience anything game-ending, and the entire thing was free from crashes.

I am genuinely impressed with the depth, breadth, and beauty of this charming little sim game. While there is a bit of a learning curve, My Time at Portia is one of the most robust, interesting, and addictive simulation games I’ve played in a long while, especially with the tiny price tag of $20. There’s so much to do, so many characters to meet, and the entire quest system is forgiving, allowing you to power through missions quickly if you want without punishing you if you need to take a little longer. My Time at Portia is available now on Early Access in the Steam store, though we can expect news of both a full PC and Switch release sometime in the near future.