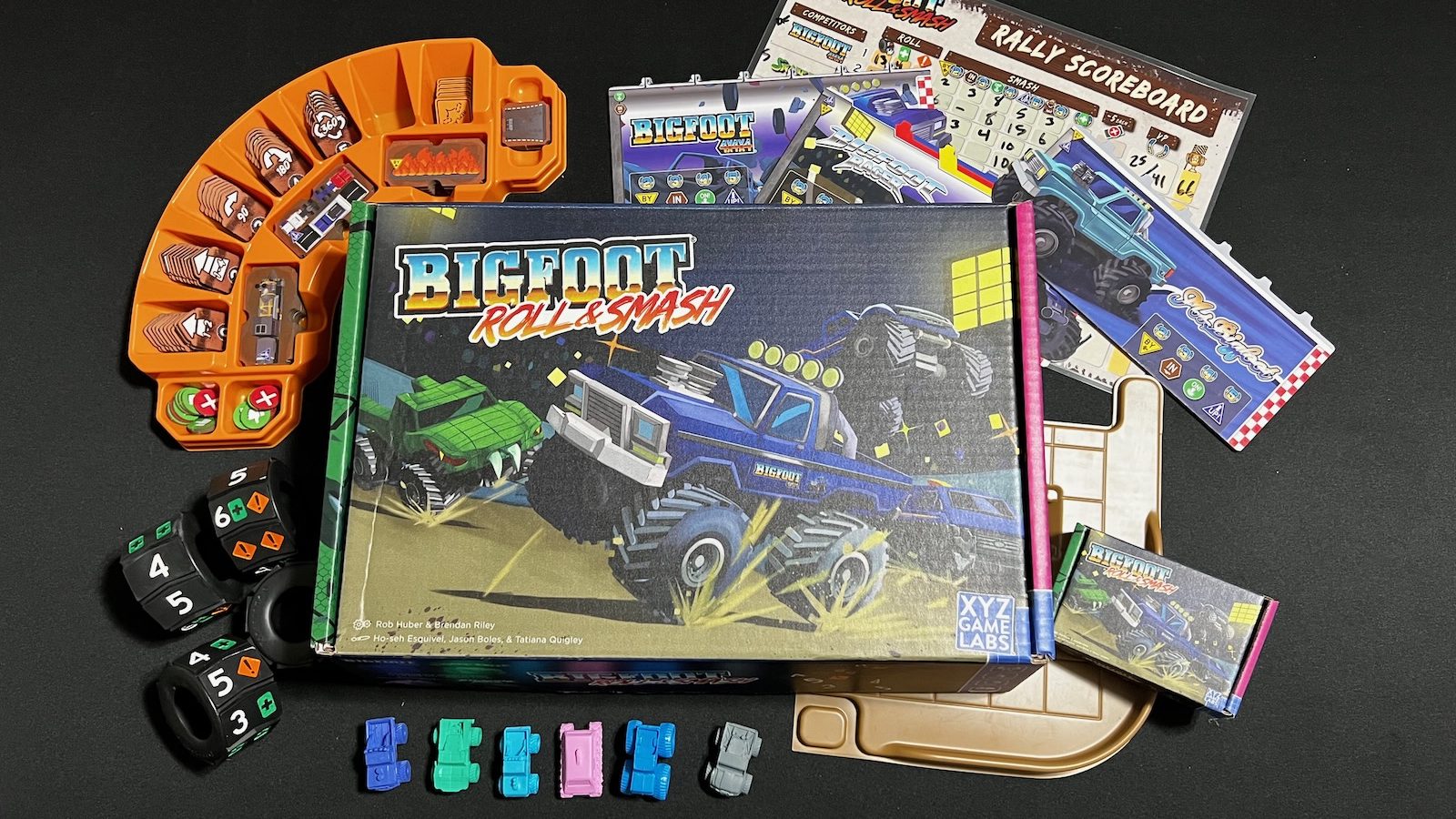 SUNDAY SUNDAY SUNDAY! Get on down to “insert name here” arena for Monster Jam. See your favorite trucks smash! Growing up, I would hear that radio ad once or twice a year. I’d beg my dad to take me, but never got to go. I still had a few matchbox monster trucks and would take them across a few ramps, but really missed out on the monster truck phase. Bigfoot: Roll and Smash gives me that chance to live out a missing piece of my childhood. 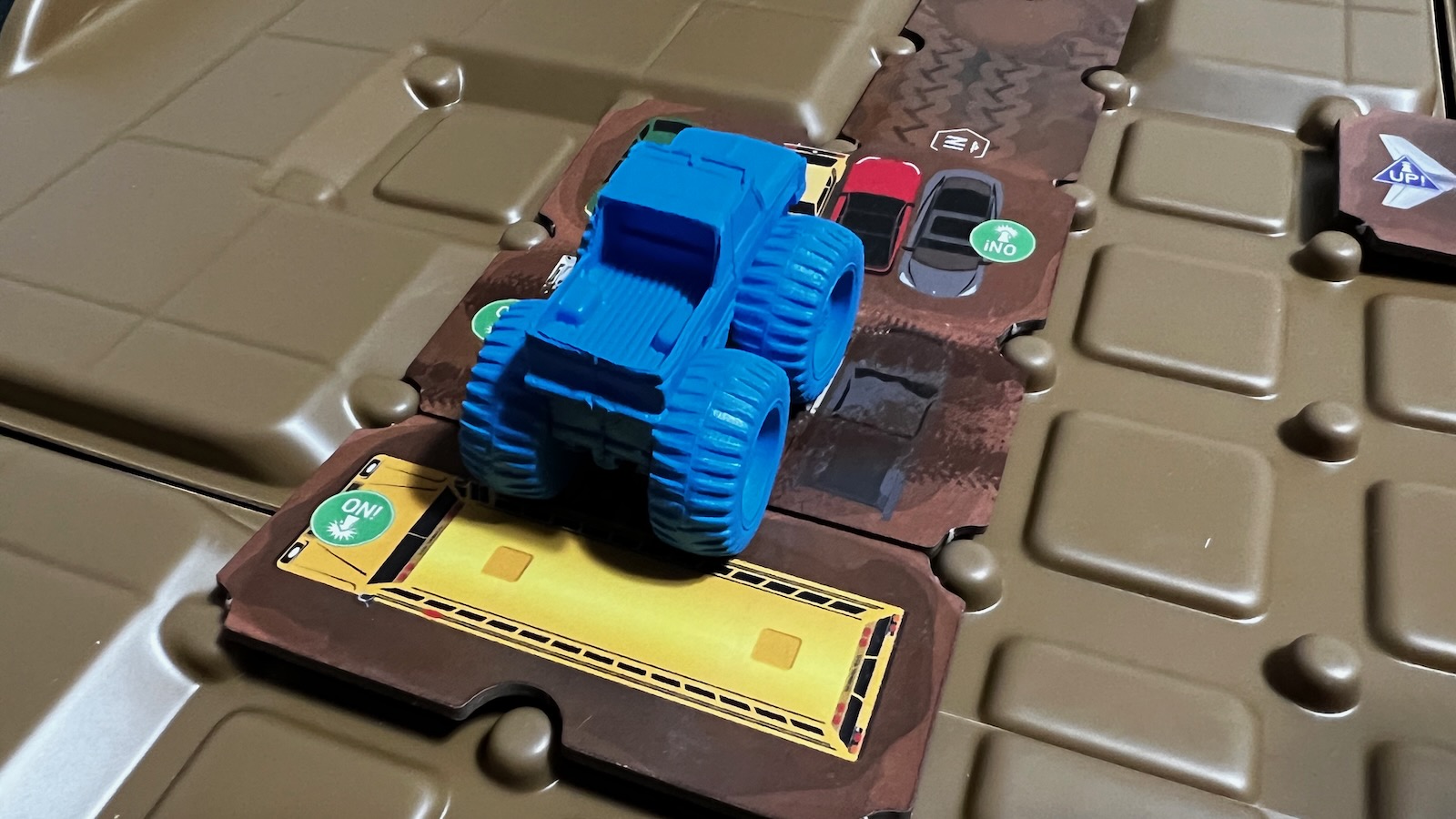 Monster truck running over some “ON” obstacles.

Currently taking preorders for a first quarter 2023 release, Bigfoot: Roll and Smash is monster trucks mixed with programming with players trying to plan their best and most effective run. The base game challenges 1-4 players to roll the dice and traverse the arena. The base game also features four classic monster trucks including Snake Bite, Bigfoot Racer, Fastrax, and the original Bigfoot. Each truck comes with its own specific style in the form of a style deck and miniature figurine to run through the arena. 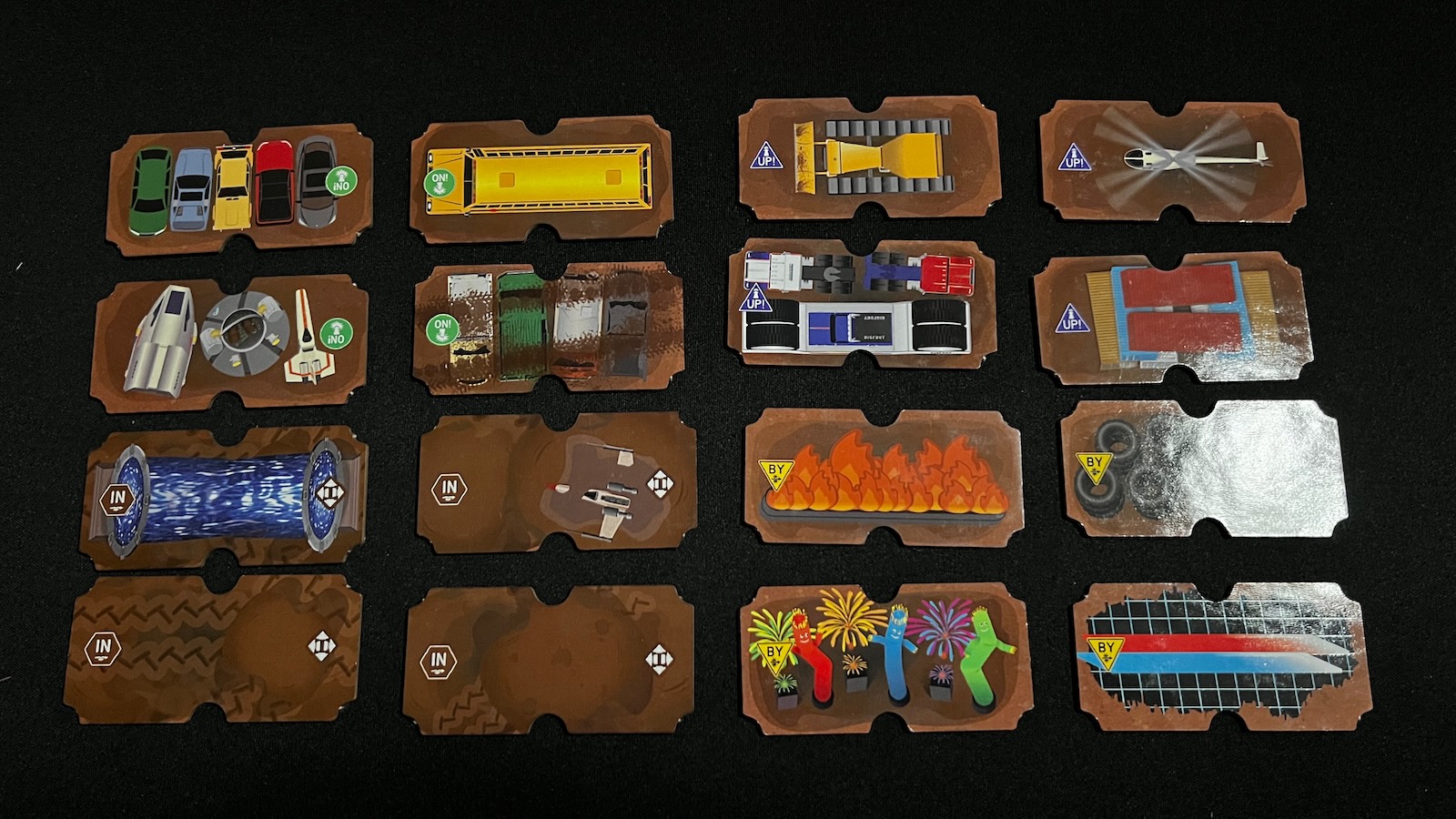 Variety of different obstacles players can place in the arena.

At the beginning of the game, players will alternate placing obstacles in the arena in one of four categories. Up obstacles are for jumping over, On obstacles for smashing over, the By obstacles are for styling by or over, and the In obstacles are mud pits for sliding through. The game comes with a variety of options such as airplanes, fireworks, and school buses for players to arrange in different combinations making each arena unique. The placed obstacles can be changed throughout the player rounds and new obstacles are added halfway through the game. 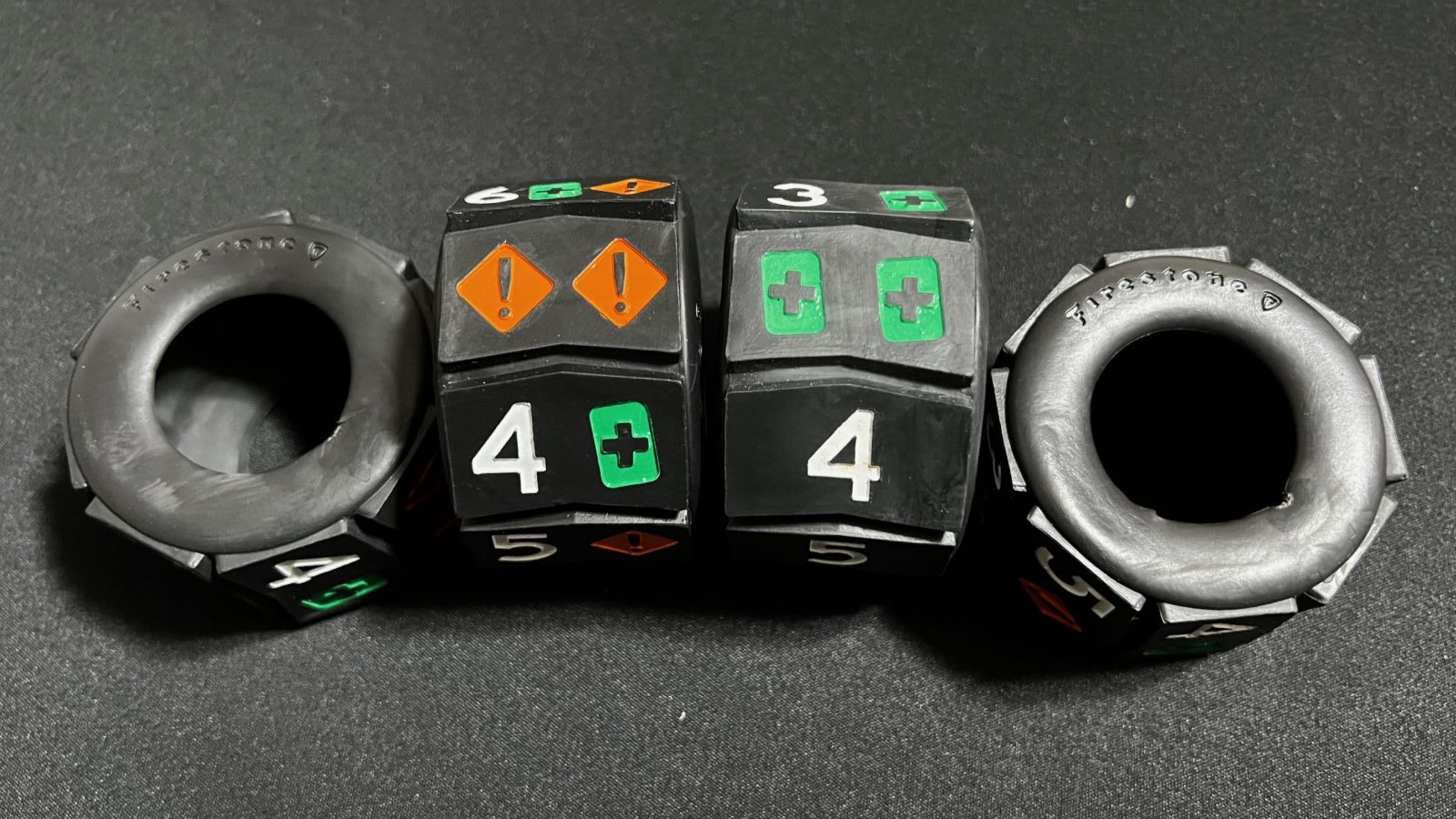 Phase 1 of the player turn consists of rolling the dice, but not just any dice, four monster truck tires 65 mm in diameter which are approximately 1:25 scale of actual monster truck tires. Tire faces have a variety of numbers and symbols. The numbers are points that are added together to give players purchasing power when planning their routes. Hazard symbols allow other players to modify the arena making the run more difficult. Style card symbols allow players to draw cards from their style deck to modify their runs and maximize their points. 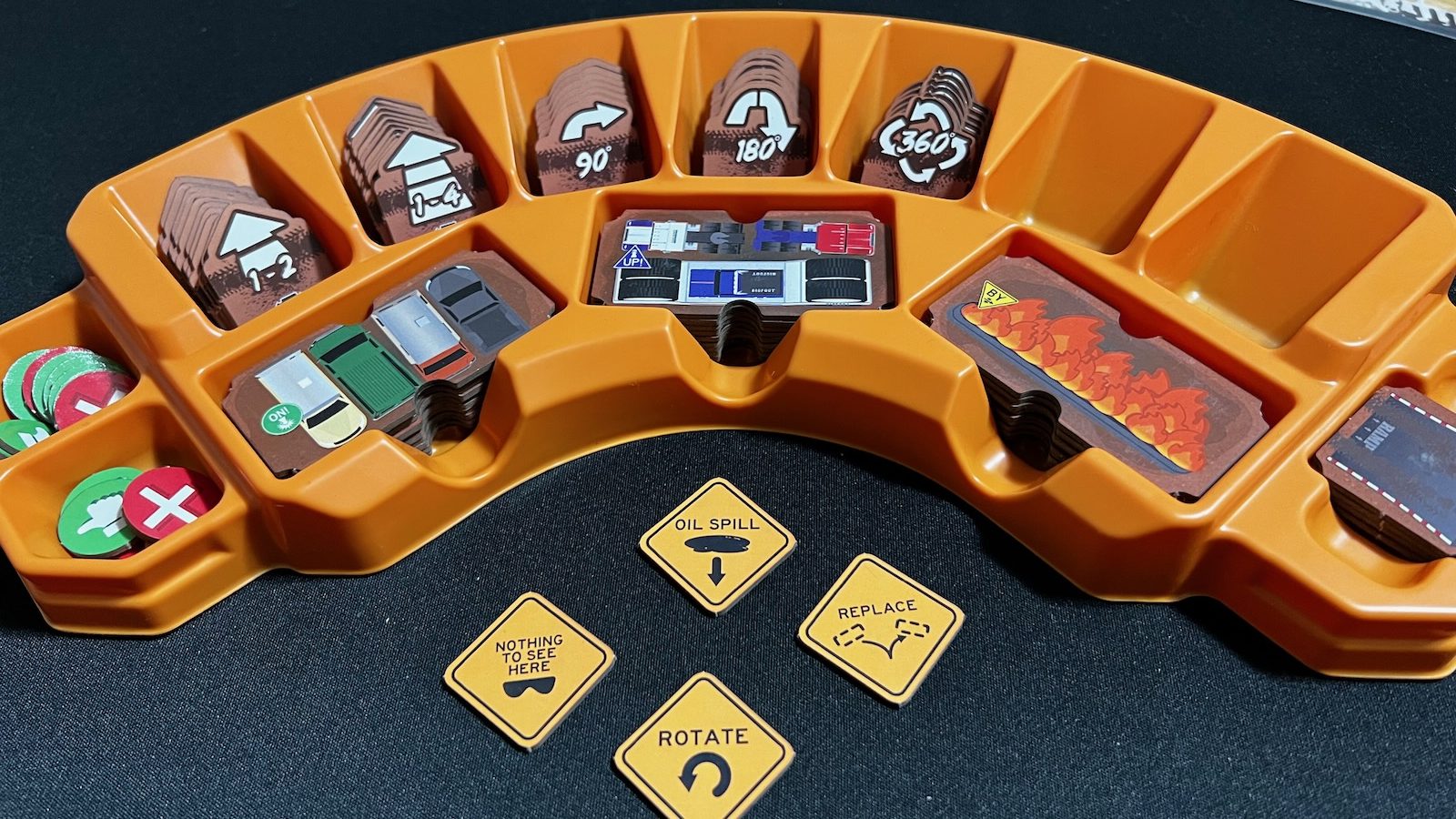 Market for players to buy truck movement from and hazard tiles.

In Phase 2, players will plan their run using a variety of tiles available for purchase. Tiles range from 0-5 points and allow players to move forward a number of spaces and make 90, 180, and 360 degree turns. Players can also buy ramps to help the trucks get airborne. In their planning, players are trying to interact with as many elements as possible to maximize their scores. Obstacles can earn a player anywhere from 2-5 points. Style cards can also be used during the run to enhance the scores, repeat moves, turn certain obstacles into ramps, and a variety of other things. 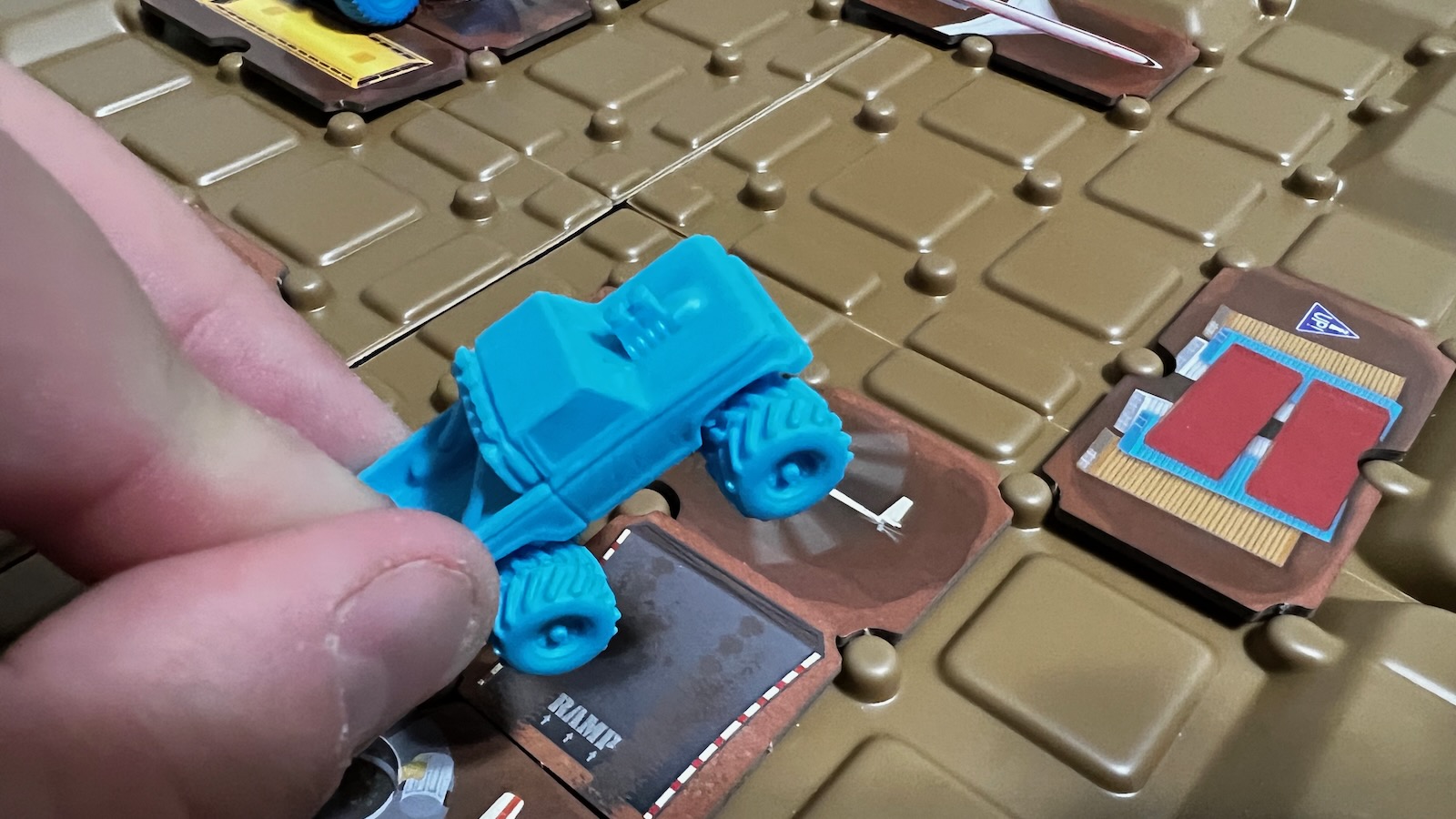 Truck hitting a ramp and jumping over an “UP” obstacle.

Phase 3 is the smash phase where players will take their trucks through the programmed run. The other players will place tokens on successful and failed interactions with obstacles throughout the run. One player can even announce the run in their best arena broadcasting voice for some extra flair. At the end of a run, scores are tabulated on the scoreboard with points being taken away for interacting with an obstacle the wrong way. After each player has taken a turn, new obstacles are added to the arena and another round takes place. The player with the highest score after two rounds wins! 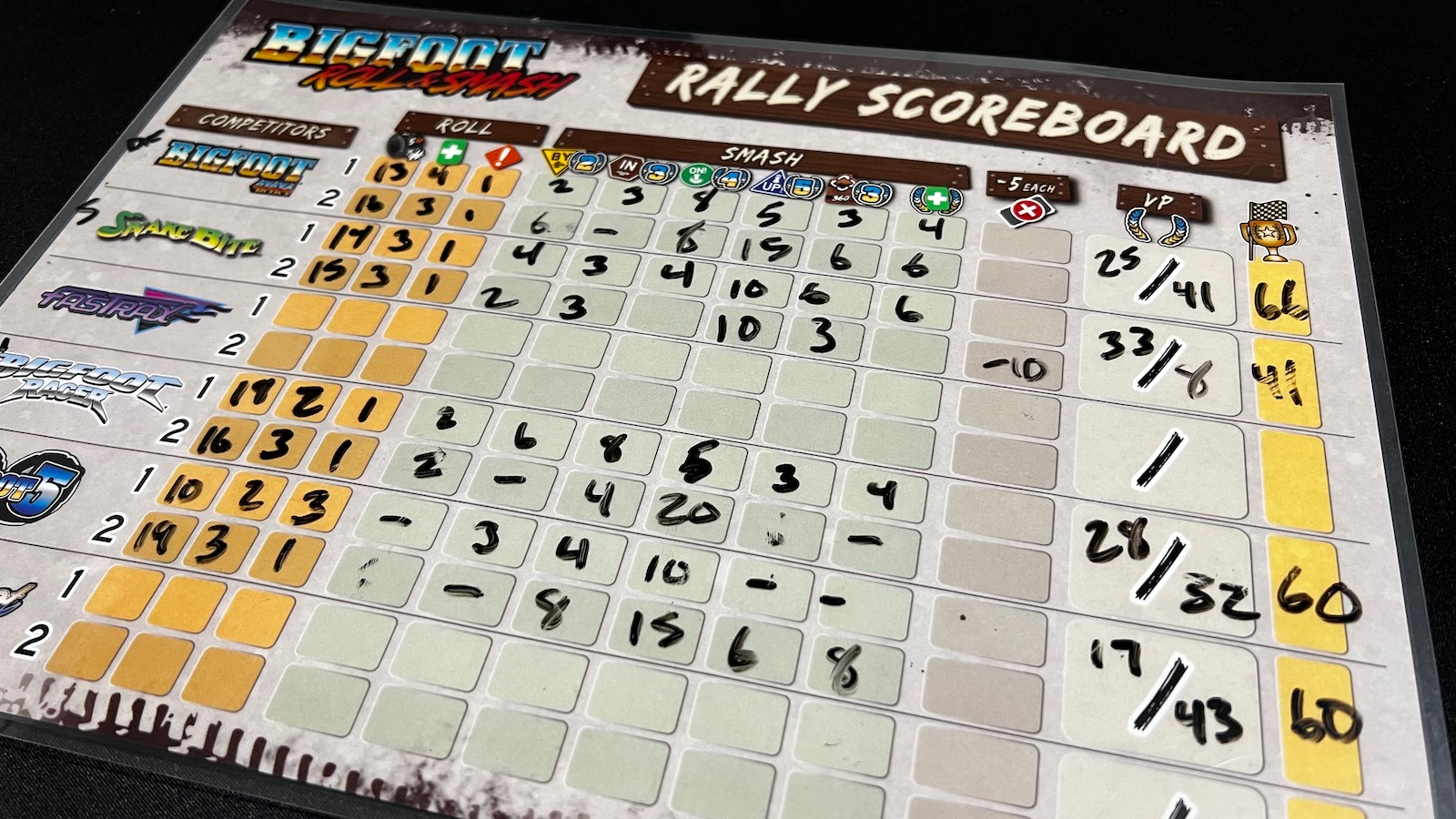 The base game also comes with a Rookie mode for younger players and a Solo mode. The Rookie mode simplifies the rules by taking the programming tiles and style cards out of the game and all 16 obstacles are added to the arena. Players will roll the dice and move through the arena however they’d like with the numbers shown. Hazard symbols allow players to remove obstacles from the arena, and style card symbols allow players to add a ramp. Each time an obstacle is scored, the player gets a point. The solo mode gives players four premade arena layouts to choose from with each arena getting more difficult. If the player can complete all obstacles in two runs, they win. Complete all four arenas to complete the Arena Legends Challenge. 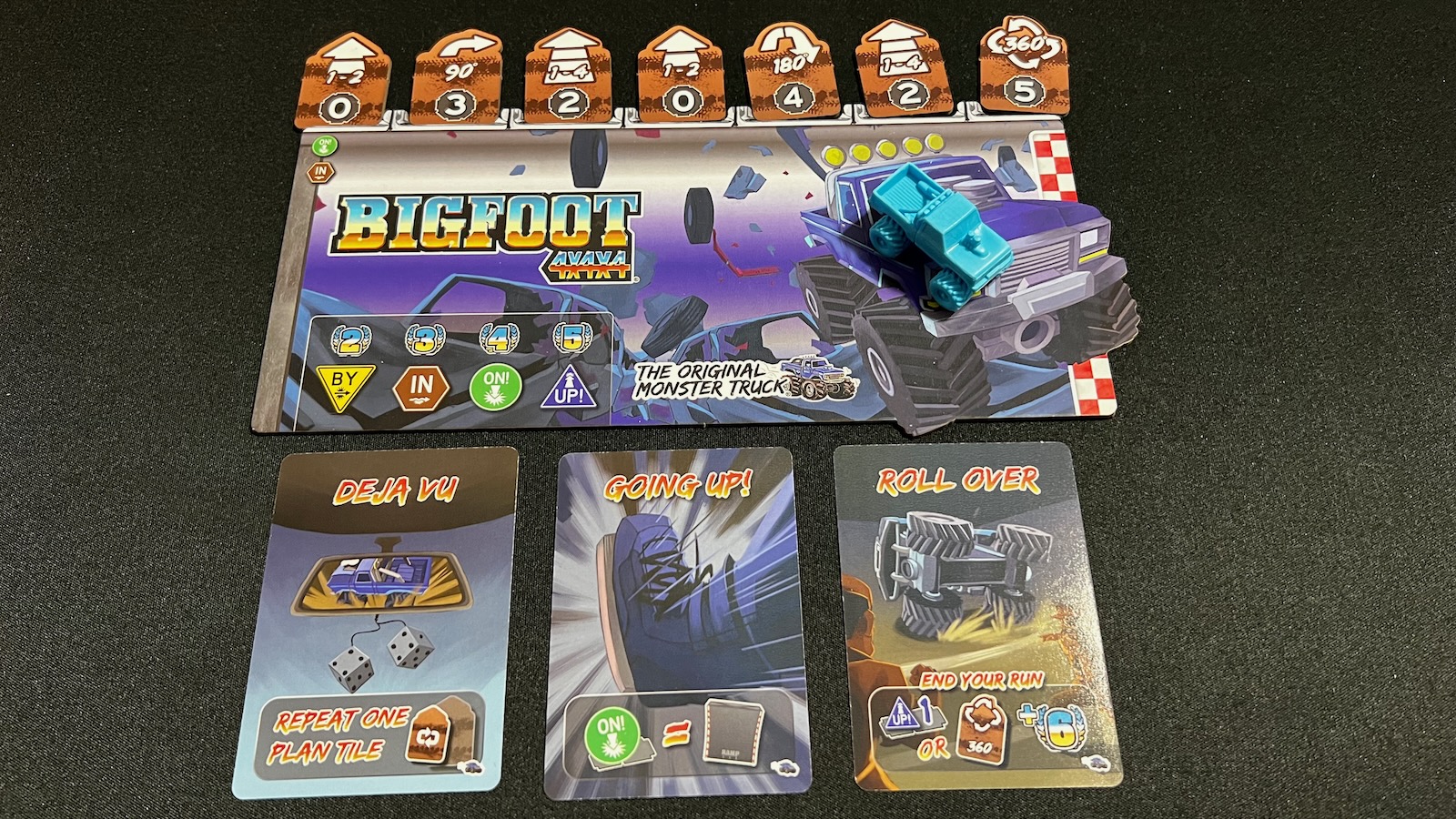 Player board and style cards.

A Mods Expansion is also available for preorder that adds two new trucks, the ability to play up to 6 players, and the crew module. The 5-6 player mode cuts planning tiles from seven to five tiles to keep the game moving. The crew module features professional drivers, monster truck legends, and expert crew to give you a leg up in your run. Also driving into the arena are Bigfoot 5 and Ms. Bigfoot along with some new obstacle tiles. 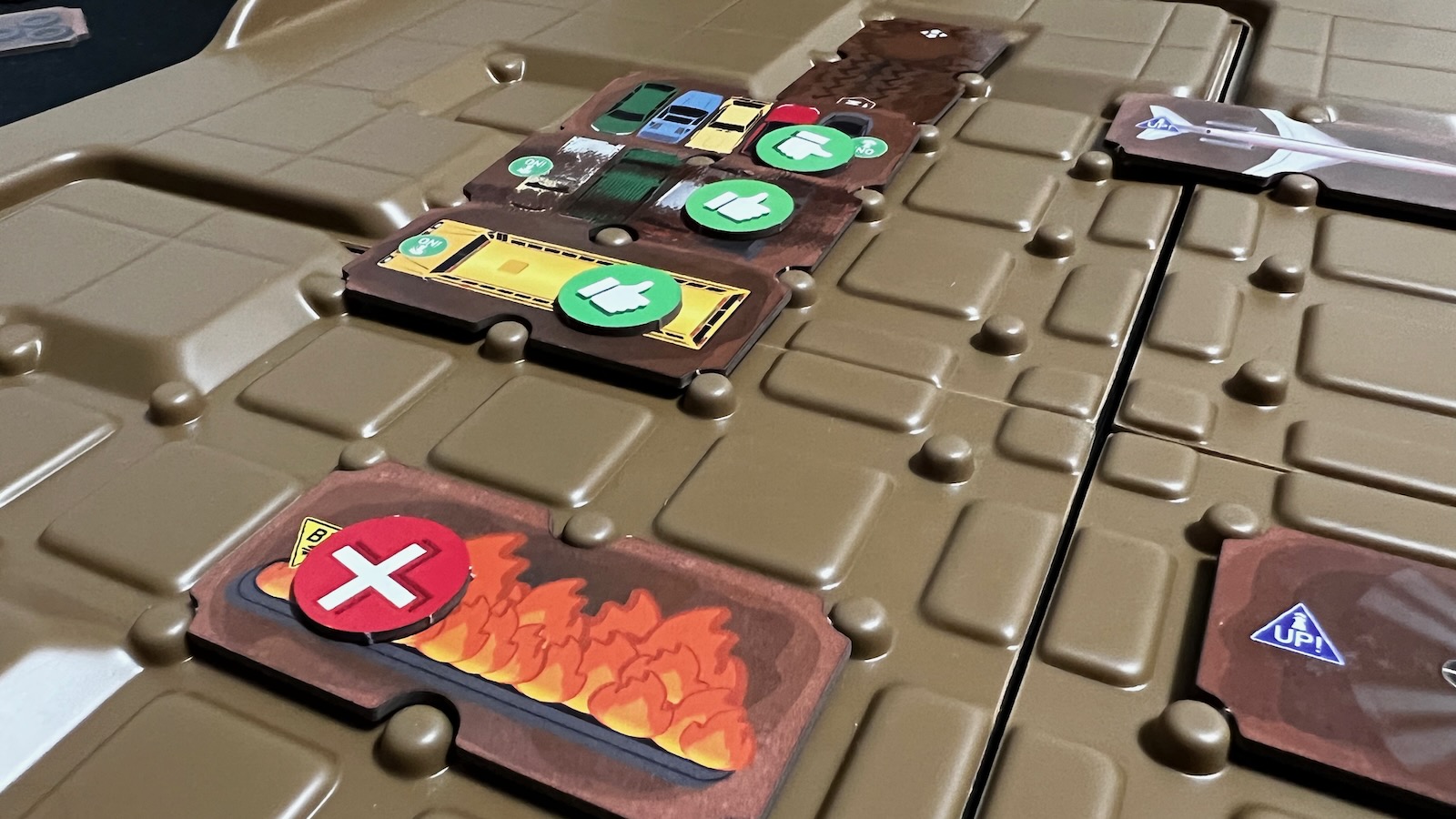 A scored run. Thumbs up tokens on successful obstacles and red x tokens for failed obstacles.

As someone in education, this game really hit a sweet spot for me since I am always looking for ways to get games into classrooms. The idea of programming a run and hitting go to see what will happen can help students learn how to logically process through a real life algorithm. Combine that with monster trucks and running over cars and you have a “smashing” good time.