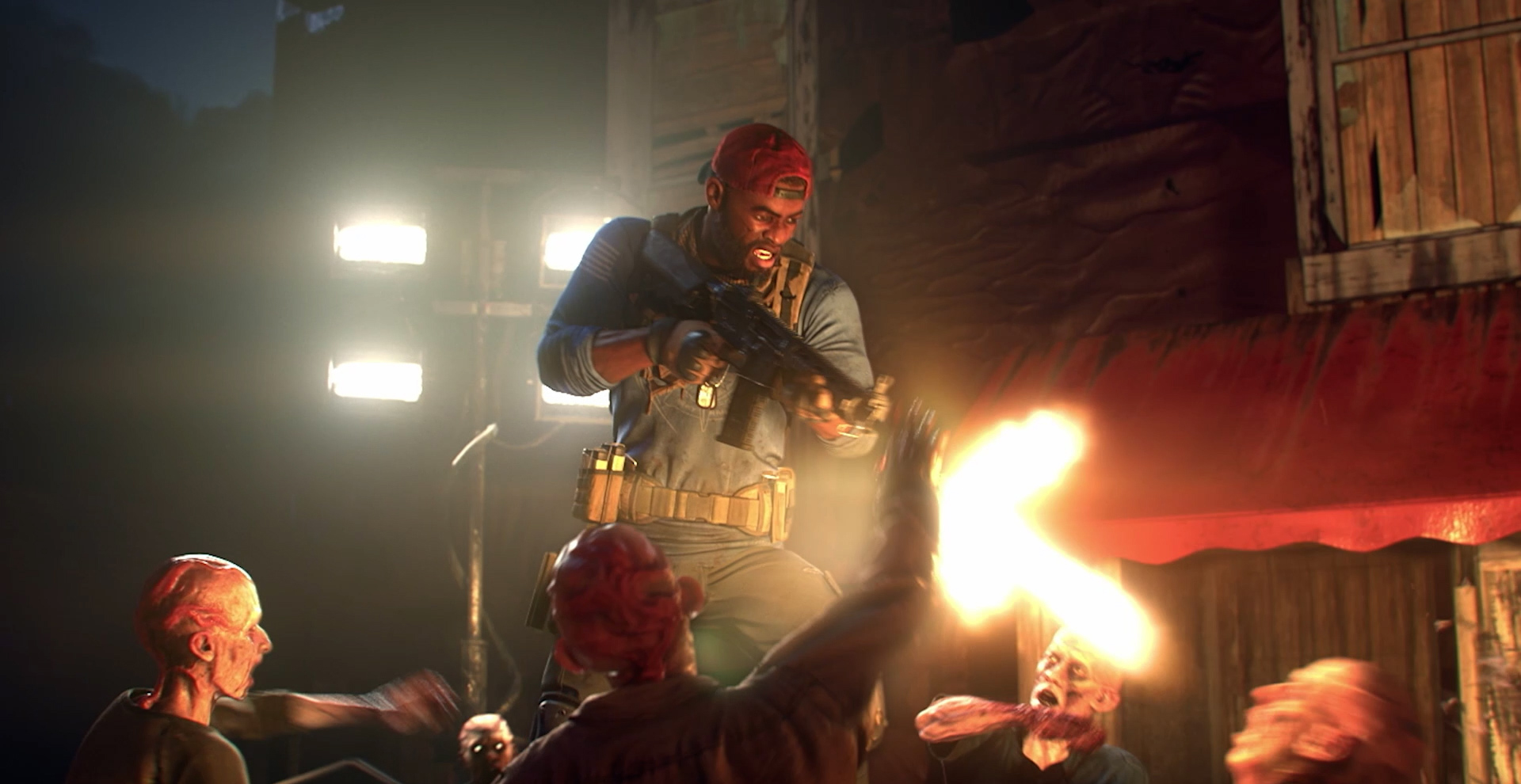 Back 4 Blood proves I’m not the smartest person in the room. I say that because if I were in charge of Turtle Rock Studios, the first game I would’ve created was a re-imagining of the zombie co-op game Valve has, basically, left for dead. Had Turtle Rock made the game around the time Evolve came out in 2015, we wouldn’t have this re-imagining. A lot of new design concepts have emerged in the last five years, which have led to this version of the Left 4 Dead formula. The title absolutely signifies how Turtle Rock approached this game: they wanted to slay us. Mission accomplished. Even in an alpha state, Back 4 Blood looks like it will be the best version of their zombie co-op formula.

Back 4 Blood feels so much like Left 4 Dead, it’s laughable. Remember the witch? Yeah. It’s a Snitch now. The Boomer? It’s called a Retch; and it still spits goop that attracts zombies. How about the Charger? It’s now a Bruiser and it still has the single giant arm, only it swings it around like a club. There’s so many Left 4 Dead callbacks, you’d start to wonder if Valve could sue. But with all the similarities, there are major differences; the biggest being a rogue-like card system.

Before each round, you choose cards. These cards act like modifiers that stack as you progress through each level and earn more cards. They can buff your health, your weapon power, your melee power, or even do a combination of buffing something while sacrificing the efficiency of something else. For example, a card can buff your healing efficiency by 30% but reduces your stamina by 10%. 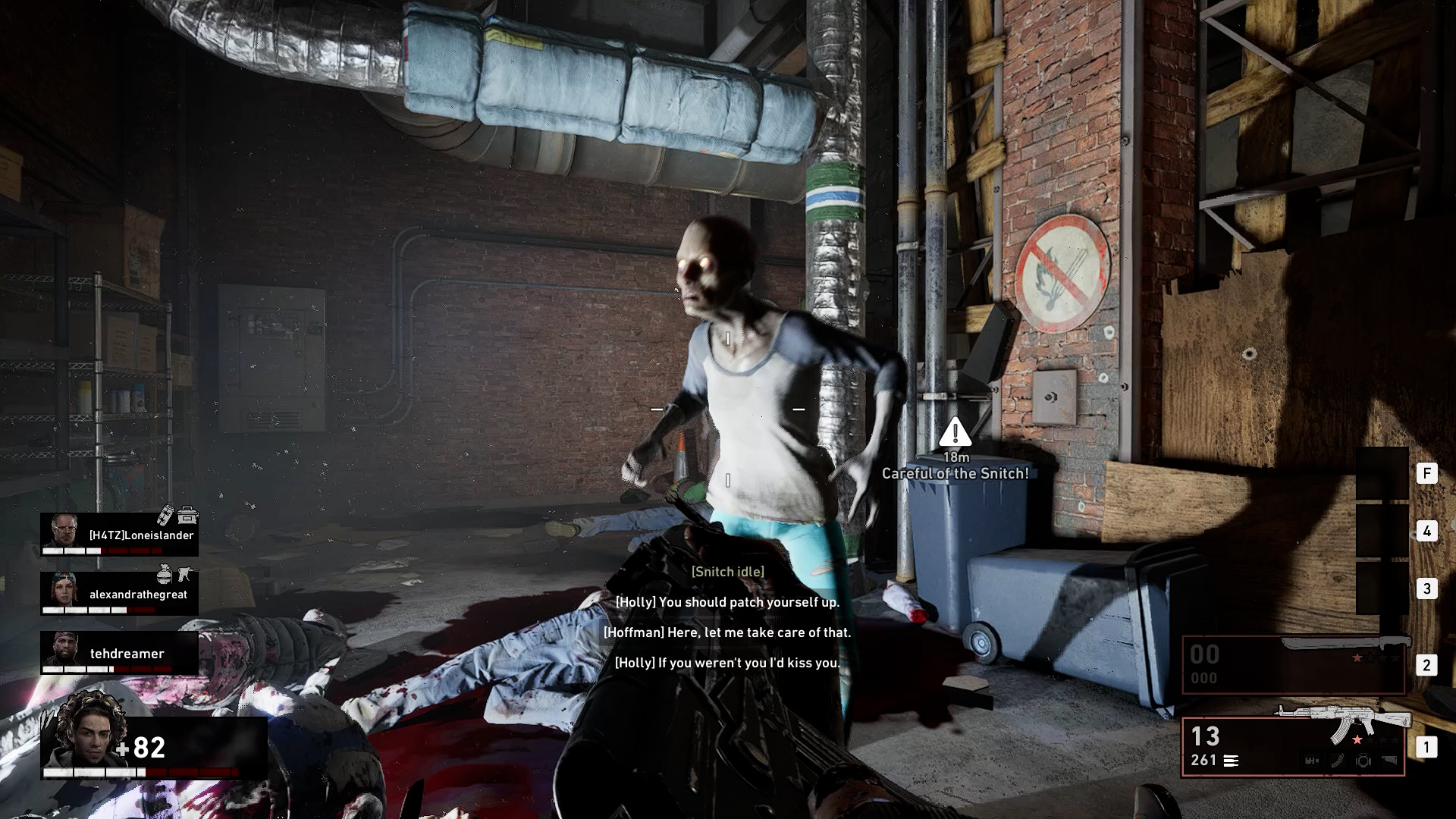 Every stage is also modified by cards. They’re considered “corruptions.” So the first time you play a map, the skies are clear and your vision is great, but maybe the next run on the same map includes fog. Or maybe all common zombies run at you, not caring about all the bullets you’re peppering them with. Or maybe the common zombies are equipped with Riot gear. So what you get is a game where no two rounds are ever quite the same.

Honestly though, even without the cards, zombie placement changes every time, so maybe you encountered a Snitch in the middle of the map the first time, but the next time the Snitch might be near the beginning of the map. Or maybe there’s no Snitch at all – you get a Bruiser instead. But the stage modifiers during the alpha didn’t alter the matches so much that I could feel a major difference between them. What I felt more was the shifting pick-ups. Where in one instance there was an axe to pick-up, now there’s nothing. Or where there was some Sniper ammo, it’s now pistol ammo, if there’s anything there at all. It seems these small changes are supposed to equate to the feeling of brand new runs, but I never felt I had to employ new strategies because of the modifiers and map changes. There were more cards that weren’t available during the alpha, so I’m hoping there’s also more “corruptions” that force different approaches.

Each character has their own weapons and passive perks. I liked Evangelo because he came with a Machete that swings wide, but he also gives me increased stamina regeneration and increased movement speed. There were four characters available but there are four more silhouette boxes meaning there might be more characters by the time the game comes out (fingers crossed they’re not DLC). 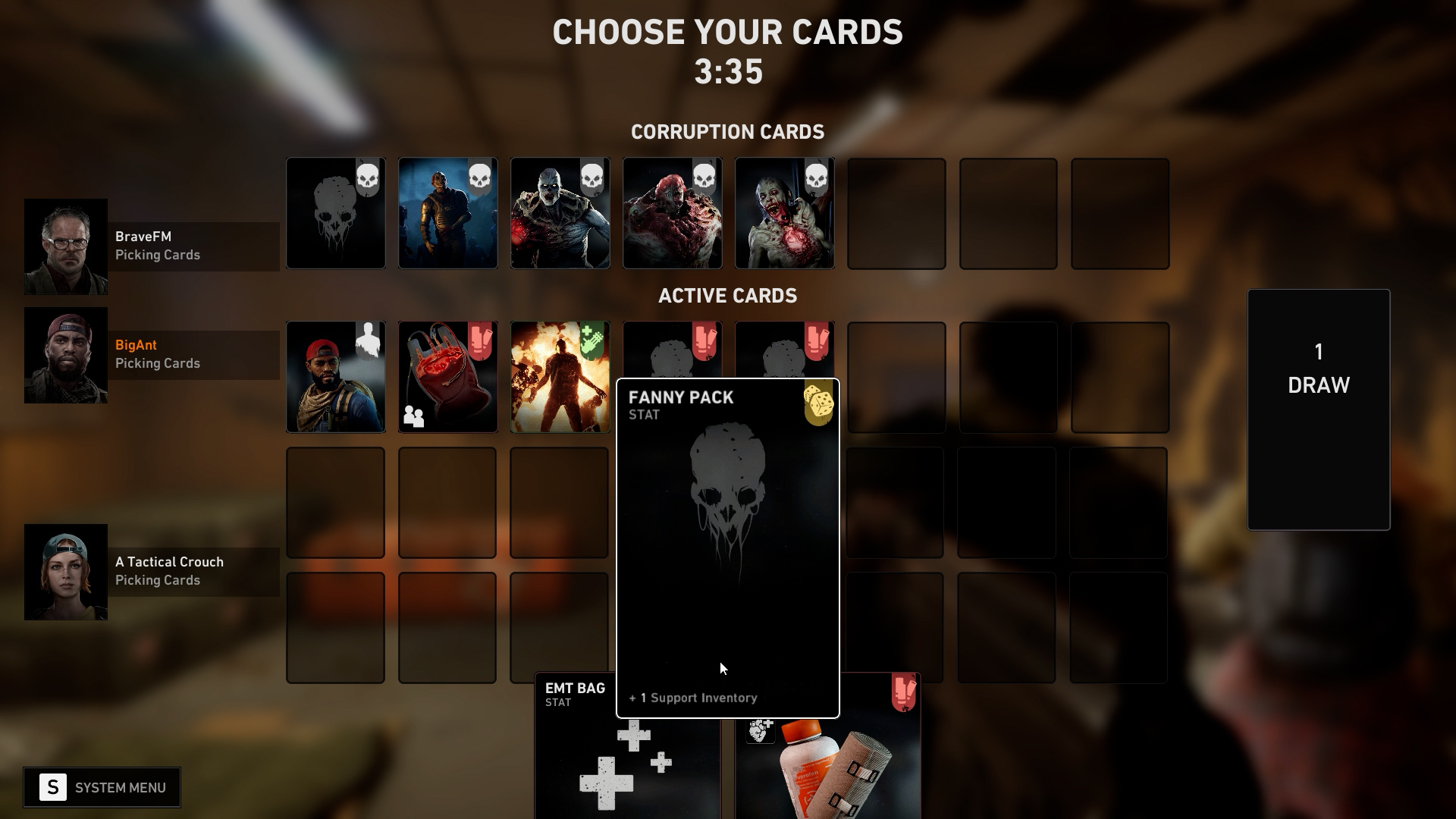 On the positive side, each player gets their own individual perks that clearly benefit the player using them. But on the negative side, it’s hard to feel the impact of your teammates’ abilities benefitting you. It seems like there isn’t a way to tactically use the strengths of your teammates. The only way to get the best out of your teammates is through comms, which feels no different than L4D. It’s a system that feels like it could, and should, go deeper even to the point of creating quasi team compositions. And so, the only variety comes from the modifiers, map placements and the players you’re playing with, which isn’t unique enough considering the different elements Turtle Rock has added.

But the guns feel so good to shoot. Assault Rifles have a nice pop from the recoil and shotguns have a satisfying burst from the barrels. More importantly, it’s easy to fire a single shot with the tap of the mouse without firing more than needed. Headshots burst in a flesh-ripping and juicy sound. And even though it felt easy to pop a zombies head, I love the fact that there’s more ways to attract zombie hordes, adding more tension, especially since you don’t have an unlimited ammo pistol.

The only map available to play during the alpha, Evansburgh, was reminiscent of early Left 4 Dead maps, but I felt there was a better combination of stealth and aggression. You don’t have to walk on eggshells but you can’t run and gun. My team and I could be mowing down a group of zombies only to accidentally shoot in the direction of a Snitch and startle it, triggering a ravenous hoard toward us. Moments later, we could trigger a door alarm, attracting a horde. Meanwhile during that fight, someone could get soaked in Retch guts and attract more hordes. And to put the cherry on top, while trying to escape that horde, someone triggers a new wrinkle, and an Evolve staple: flocks of birds, triggering another horde. 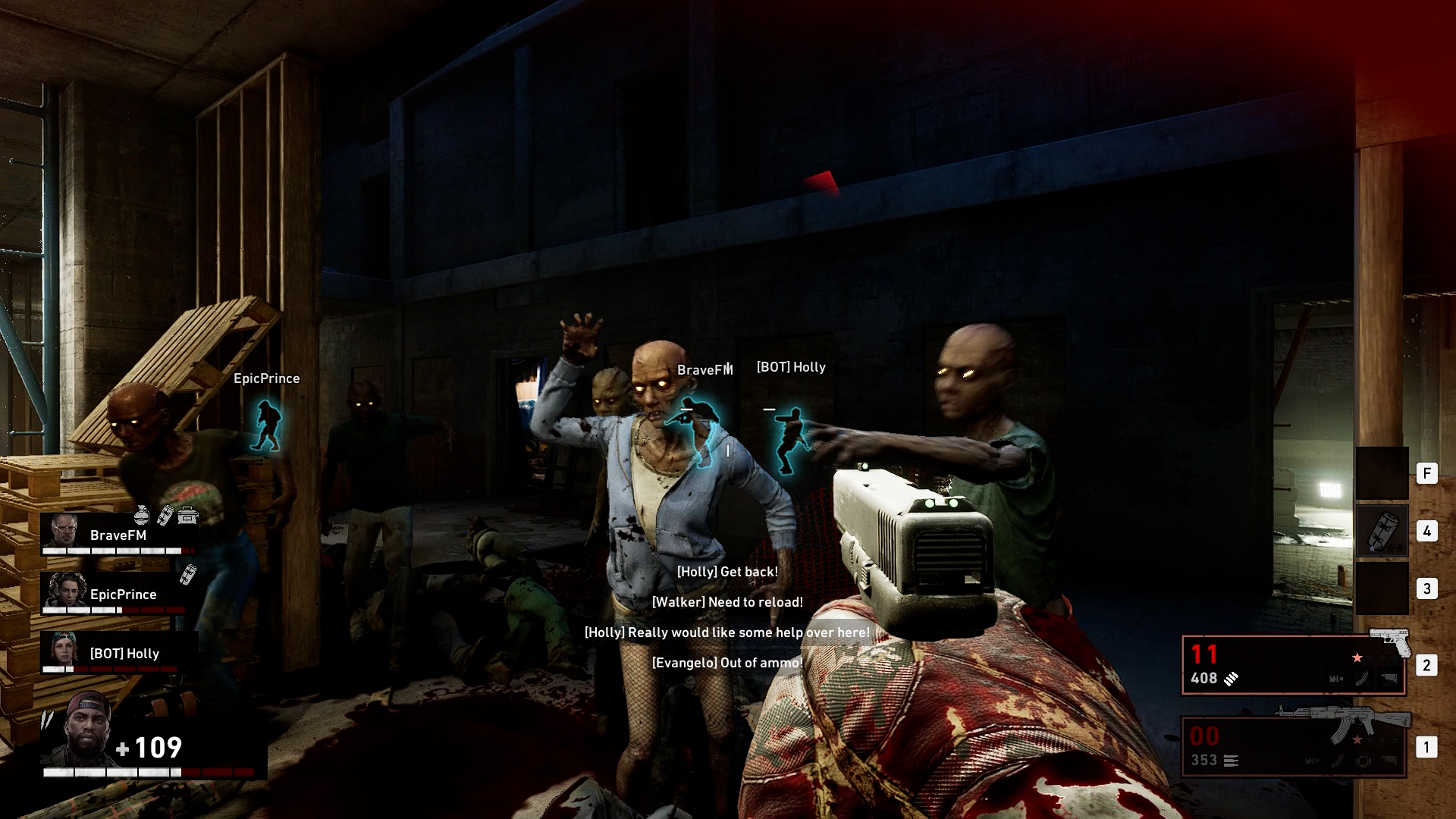 Back 4 Blood will launch with other modes, but the alpha only focused on Act 1 of the campaign, all within different areas of Evansburgh, a town where everyone died from the infestation. The characters chatter to themselves and teammates, mostly on in-game zombie stuff or if you happen to shoot your teammate (please don’t step in front of your teammate), but there are times when there’s NPC radio chatter, and it seems like that’s how much of the story will be fleshed out.

For an alpha though, the game ran smooth. Frame drops were hardly noticeable. I also played with a person who was playing on a laptop and it ran perfectly fine for them. So far the graphics look stellar carried by detailed textures and great lighting. My favorite is being able to see a zombie silhouette through the fog and watching its visibility change depending on the light source.

I also have to give a shout out to the sound design. It’s superb! The puking Retch sounds are appropriately belchy, gutsy and acidic, zombie screams echo creepily throughout a level, and proximity and directional sounds are dead-on. Also, kudos to the accessibility team. As I played, text slid on the screen that mentions if a zombie is idle, if a horde is coming, when zombies die, and other very useful prompts for those who cannot hear the very distinct sounds. I tried playing with the sound completely off just to see how effective they were and while it was harder because it doesn’t mention what direction these sounds were coming from, the prompts plus in-game tags (“Careful of the Snitch!”) certainly make it playable. I can’t speak on how effective they are compared to someone who actually has trouble hearing sounds, but it seems like a great start and it’s good to see some attention paid to this area. 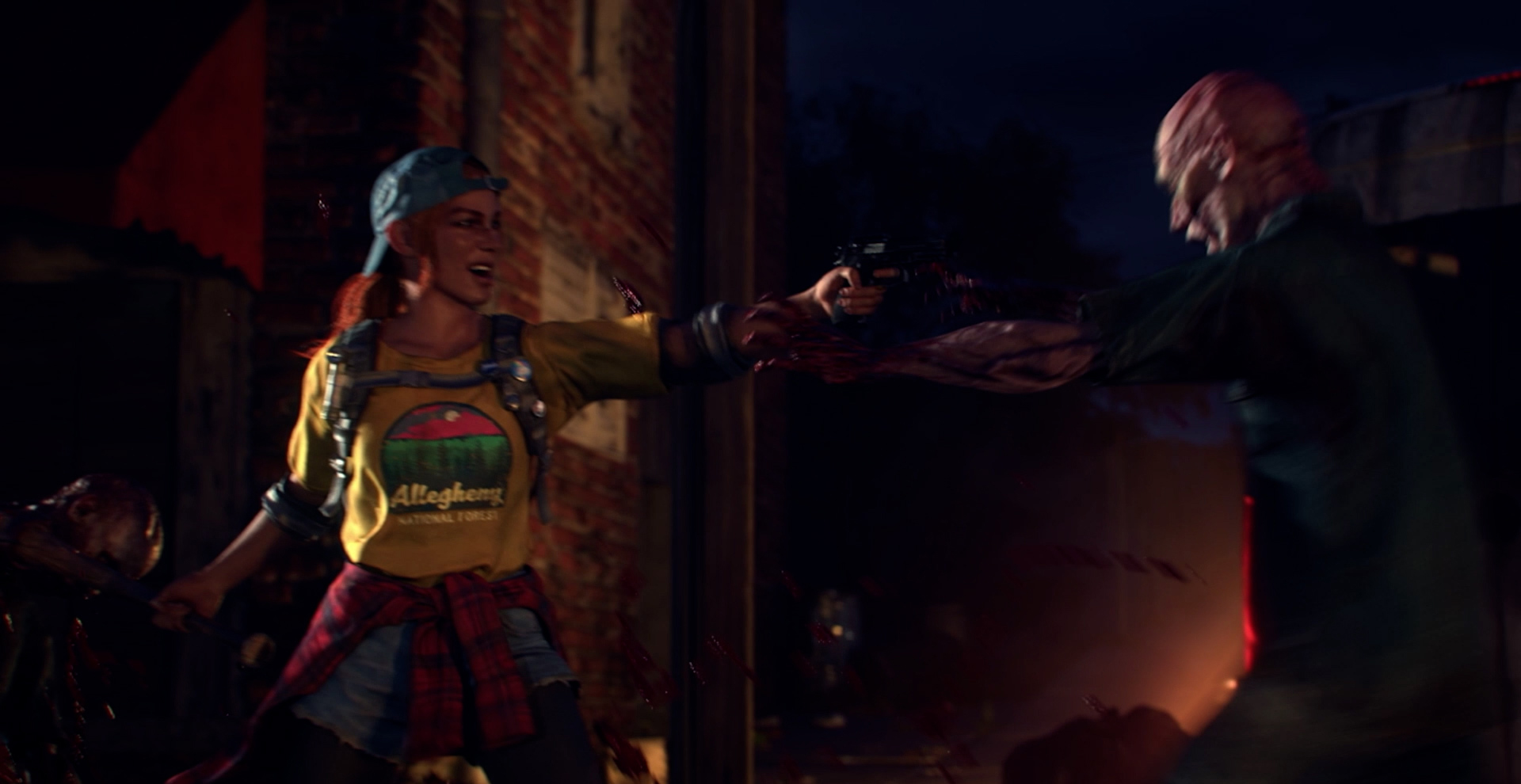 There are a smattering of glitches like inconsistent button prompts and lots of animation bugs. Many times I looked at a door and until I peered at a very specific point did the prompt pop up. Lots of times, legs wouldn’t animate, and when other players were down and slashing away at zombies, their bodies never moved. A few times after I lost all my health while dying, I didn’t actually die. My teammates could still revived me. But I didn’t experience anything game-breaking unless you want to consider the latter game-breaking.

In some ways this felt like a full review because that’s how finished this game feels, but believe me, it’s not finished. There are still some tweaks that are needed to make character abilities feel a little more distinct and cooperative between other teammates’ choices, and we need to see more card interactions. But this was an excellent first showing of a re-imagined zombie co-op classic, however I will not encourage you to pre-order it. But I will say, put this release on your calendar. This might be a special game.