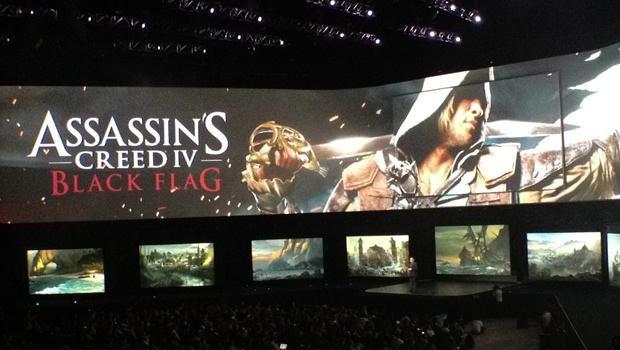 Assassin’s Creed III had its fair share of issues, but it was also full of promise. Telling the story from the perspective of a new relative of Desmond – a Native American named Connor. In an almost universal fashion, fans clamored for the naval combat and in Assassin’s Creed IV: Black Flag, we are getting our wish. I got to sit down with the team of Ubisoft Montreal for an extended look at the next-gen launch title, Assassins Creed IV: Black Flag.

Before we kicked off the press-only demo we checked out the action demo that was shown at the Sony press brief. The action takes place in the Indies in the year 1717. A young captain Kenway follows after a rat named Jenkins, suspected of aiding the enemy. Upgrades to previous mechanics show some of the character of Captain Kenway as he blends in by sitting on a log and snuggling up with a young lass, kneeling down to throw dice with some fellow pirates and commenting “I’ll be back for your coin later, lads”, and even pausing for a drink to remain unnoticed. As Jenkins slips into the nearby forest, we see the incredible fidelity in the new engine as the underbrush bends and shifts around us. Carefully navigating the forest (tree running is back and looks improved) we air-assassinate Jenkins and his confidant, gunning down the remaining conspirators only to see what looks like a British fleet launch volleys of cannonballs into our pirate town. Leaping from burning building to building we hurl ourselves through the town as it burns, showing off some fantastic damage modelling, beautiful lighting, and truly amazing texture work. As debris and smoke fills our vision we burst off of a building rooftop and seamlessly transition to our boat, immediately barking orders to our crew and setting sail – the sailing portion is no longer a separate game.

Our second demonstration is the open-world portion of the game. When not in a specific mission, you can once again explore and engage in other activities. Starting on some phenomenal looking water in the West Indies of September of 1717 – the Golden Age of Pirates – we fast forward past the events of the previous demo. Our developer demonstrates the expansive world of Black Flag by zooming out significantly, showing the game is many times bigger, and all of the islands shown are accessible and available to explore. Showing off their second-screen experience, we push this huge map to our tablet while we continue on with a minimal HUD.

As a newly trained assassin we have access to pigeon coops for additional missions. We pick up a contract to kill two Templar brothers and begin making our way through the village packed with people. Using Eagle Vision we spot the two Thompson Brothers. Instead of simply walking up and savagely murdering them, we walk past and lean on a bar behind them like a normal patron. When one of the brothers reaches in for a drink we smash him squarely in the jaw and cut him down. Using the all-new “free aiming” mechanic we take a few shows at the second fleeing brother but he makes his way onto a boat and begins to flee.

Giving chase, we once again seamlessly board our own ship, the Jackdaw. Grabbing a spyglass we see that the boat we are pursuing is a Level 4 Frigate named “Hercules”. We can also see that it is carrying valuable cargo that we’d rather capture than destroy – we will use chainshot to try to snap the masts, slow it down, and board her. Dodging the heavy cannon on the Hercules, Kenway orders his crew to board her. Preparing to board we see objectives and sub-objectives appear on the hud – “Kill enemy crew – 0/15” and “Kill Captain Thompson” are our goals to win this section. Using the swivel gun to shoot targets on deck our men throw lines and grappling hooks across to the hull of the Hercules. Using the chaos, we ascend our mast, using the proximity of the Hercules to quickly leap to her mizzenmast. Using the rigging to leap through the air, we locate the best chance to leap onto Captain Thompson and take it. Cutting him down doesn’t instantly end the battle as it did in ACIII though – leaving us to finish off the 15 needed to break the crew of the Hercules. With the crew defeated we see that we can recover 500 reales, 50 wood, 30 metal, 2 heavy shot, and 6 crew members from the Hercules. We are given three options – scuttle the ship, strip her and then scuttle her, or recruit her and her crew to our fleet. We choose the third option, placing a captain hat on one fo them. If you are thinking that this sounds a lot like a next-gen version of the classic title Pirates! from Sid Meier, you understand why everyone in the room was suddenly VERY excited about this new mechanic.

Back on the water we pull our spyglass to see the HMS Oak and San Bartolone sparring it out on the ocean. The British and Spanish ships can be engaged, using the chaos to cut them both down when they are weakest and vulnerable, but we have different lans. We see a small island with a shipwreck amongst the shoals. Swinging from a rope attached to the the jib (again, seamlessly) and into the water, we swim over to the shore and begin to explore the small island. Amidst a half-dozen bottles of rum we find a bunch of sandcrabs chewing on the body of a dead pirate. Looting his corpse we pick up a treasure map to Misteriosa. Using the second screen experience we see a new icon on the map – our new destination. Tapping on the touchscreen of an iPad ( it will also work on Android tablets, smart phones, etc.) we set our destination which immediately reflects in the game.

As we continue to sail towards Misteriosa we see a new activity emerge. A humpback whale breaches and we see it marked on our map as an area for the new harpooning activity. This map section is then shared with my friends, showing them where they can compete in the meta-game. (Hopefully this sharing can be turned off for those who prefer to discover things on their own.) Skipping this activity (which is assured to be controversial, I’m sure) we sail into a storm. A water spout in the distance crushes a frigate in the distance, forcing us to grip the helm tightly. You can lose crew in storms, so there is risk to sailing through rough seas.

Making landfall on Misteriosa we see a quick notification that there are 3 chests, 4 animus fragments, 2 secrets, and 2 activities on this island. As we dock our ship we see a ruin in the distance to explore, as well as unlocking a fast-travel location in the process. Taking a look at our treasure map on our second screen we see that the drawing of the temple matches the sight before us. Leaping to the beach we see a group of Spanish sailors have already made landfall here – we’ll have to be careful.

The options to engage or go stealthy are yours to choose as you see fit – we decide to tackle this quietly. Carefully using the foliage and bushes to avoid patrols we remain completely concealed. The power of the new engine shines brightly here as we are fully engulfed in the plant, making for a more believable experience. When a guard turns to relieve himself we scramble up a tree and freerun away from him. Ascending past a waterfall we see a huge monitor lizard scurry away from our feet. Birds of paradise and parrots scatter as we sneak up behind another guard and choke him out.

Pulling out a new weapon – the blow pipe – we use a new ammunition called a “Bezerk Dart” to tag the captain of this Spanish crew. Functioning like the thrown darts in ACIII, the Captain begins to go crazy, drawing his sword and swinging it around. This draws all of the attention of the crew, allowing us to reach the top of the structure.

As we crest this area we see a new sub-objective – “Rescue the pirates without being detected”. The Spaniards have captured a group of pirates and are preparing to execute them. If we are spotted some or all of them may be shot during the fight, but if we are careful, we can recruit them to our crew. Easily air assassinating them we add the pair of surprised pirates to our roster.

Looking in the distance we see the top of the Seranilla Fort – it matches the hand-drawn map we recovered earlier. Heading to the designated red X on the drawing we pull out a shovel and pull a chest from the dirt. Popping it open we get an “accomplishment collectable” – Pele’s heavy shot blueprint. In this game you’ll get upgrades for the hull, cannon (you’ll start with 6 and work your way up to an amazing 56) and more, making the Jackdaw the most powerful ship in the Caribbean. Ending the demo with the series-staple area synch to unveil all of the hidden goodies in the area as well as a huge eagle-screech dive into the ocean below, I glanced back at my fellow press. Literally everyone in the room had a smile on their face and their jaw on the floor. The sense of scale, the incredible graphical uplift, the seamless world, all new activities, and what looks to be a very-welcome new adventure on the high seas makes Assassin’s Creed IV: Black Flag our Action/Adventure game of the show! Congratulation to the team – we are very excited for this one!