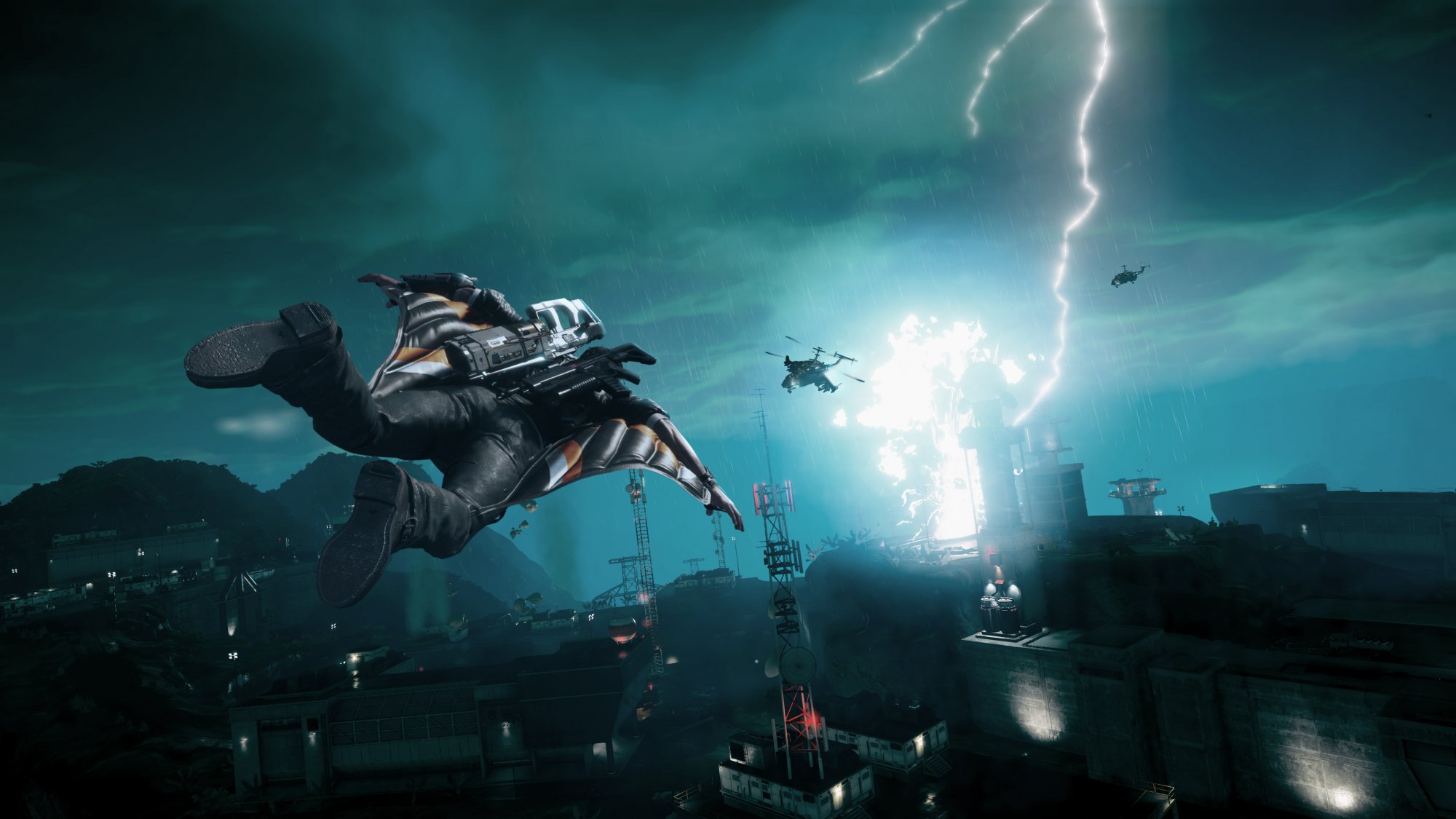 The world of Just Cause 4 is massive. It is filled with natural wonders, like stunningly lush mountaintops and winding Amazon-esque rivers, as well as man-made atrocities, like sprawling weather control stations and gigantic lightning-laced blizzards and wandering tornadoes. Combine those with the open-world, sandbox playground that is the backbone of the Just Cause games, the new tools available to protagonist Rico, and the ability to attach ten different grapples to anything and everything makes for a magical combination. So magical, that this hands-on event took a different course from most.

Instead of journalists sitting at our stations, focused on our own gameplay for our individual articles, the entire event became collaborative, with everyone spectating as much as playing. When one person wingsuited into Solis’ tornado, everyone turned their full attention to his screen. When someone else hijacked a dirigible and strapped ten rocket boosters to the back, upping its speed from 20 kilometers an hour to 140, and steered it towards a giant sand storm, everyone leaned in. We pooled our knowledge and observations to see if we could make a turbine spin so quickly that the propeller blades spun off (we absolutely could!), or if we could successfully fly a commercial jetliner through a lightning storm (nope, instant death every time), or if we could launch a giant fuel case into the air while riding it like a surfboard (oh yes, though death was imminent).

Just Cause 4 is a huge world and it is even more of a sandbox than its predecessors. Even from this early build, it’s easy to tell that Avalanche Studios truly understand why fans love this series, and have given them even more freedom, more toys, and easier access to said toys so they can freely wreak havoc across this sprawling island. While previous Just Cause games have featured one consistent environment, the fictional island country of Solis, the place Just Cause 4 calls home, features four different biomes, each with their own environment, cultures, and extreme weather patterns. The grasslands are balanced and beautiful, though you have to watch out for the ever-present, wandering super tornado that will destroy any vehicle which comes too close. The gorgeous, lush rainforests are plagued by dangerous lightning storms, and the desert, where people live in shanty towns and eek out a menial living at sprawling factories, is plagued by dust storms. And, at the top of it all, lies Rico’s goal: the snow-capped mountains and their devastating, lightning-laced blizzards.

Just Cause 4 somehow feels both familiar and different at the same time. While the destructible world and your ability to sew utter chaos remain either unchanged or improved, both Rico’s role and your enemies are a little bit different this time around. Solis is presented as a paradise, and all of its residents are supposed to believe that they’re living in an ideal utopia. This is not a place run by a militaristic dictatorship, and many of Solis residents have bought into the idea that their quaint little lives are as good as it can get. We know that Rico can take on armies, but now he’s fighting the weather itself, and these man-made natural disasters bring a whole new challenge, and a whole new way to destroy everything.

Solis also happens to be the Black Hand’s base, and Rico is simultaneously outmanned, outgunned, and outclassed here. Black Hand has impressive technology strong enough to create the natural disasters and extreme weather which defines the island of Solis. Rico can’t simply charge in and take over, he’s going to have to be more strategic this time around, and he’s going to need an army. That raises the question, just what kind of army would a man like Rico Rodriguez command? The answer is simple: an army of chaos.

In order to shake the sleepy citizens of Solis out of their contented slumber, Rico is literally going to have to sew some chaos and rally the descenters to your side. It’s not your usual army, many of them young people who run around wearing neon bracelets and charging into fights wearing paintball helmets, but somehow it’s the only kind of army I could see Rico leading. There are no shortages of regions, villages, fortifications, and supply stations for you to terrorize and loot, allowing you to advance through the story, grow your army, allowing you to take on weather controls stations, and ultimately, Black Hand’s headquarters, settled high in the mountains.

While there is a story tying the entire game together, the team tells us that they created it with the open-world nature of the game in mind. Cut scenes are short, and the different missions and bits of story can be approached in almost any order. The more you play, the more story elements you’ll wander into, and the more you’ll be able to piece together the full story of what’s going on in Solis.

That said, you can also just run around feeding your need for destruction, that’s perfectly valid too, especially if you find one of the special weather weapons. Every single weapon in the game now features a primary and a secondary fire, and finding a mediocre weapon with an incredible secondary skill is beyond delightful. We got to play around with two incredibly rare weapons, a wind canon, which blasts jets of air powerful enough to stop a commercial airplane from taking off, and halt a tornado. It also does a really great job of launching you and your favorite vehicle far into the air, if you stand on the vehicle and aim the gun at the ground. My personal favorite was the lightning gun, which fires a bolt of lightning as its primary fire, but with a press of LB, it will launch a mini lightning storm, frying anything in the area which is not bolted down.

There’s so much to talk about even from our short time with the game, that I could go on for ages. From grappling people to balloons and leaving them to dangle fifty feet in the air, to blowing up gas stations and riding the debris like a surfboard, from using a delivery crate as a stand-in for an anvil and literally squishing a battalion of Black Hand forces, to turning one of Black Hand’s own cannons into a rocket powered, airborne mobile assault weapon for the good guys, it really did feel like the only limit to what we could do were physics and our own imaginations.

Just Cause 4 will be coming to PlayStation 4, Xbox One, and PCs on December 4th. You can learn more about the game, check out more info about Rico’s upgraded grapple, and watch videos at the official Just Cause 4 website.