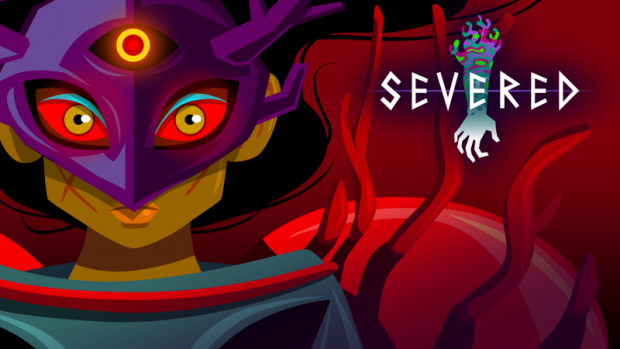 Before getting hands-on time with Severed at PlayStation Experience, I honestly didn’t know what to expect. As a huge fan of Guacamelee, I had become accustomed to Drinkbox Studios’ brand of approachable charm, but was unsure of how Severed’s touch-heavy mechanics could recreate the same levels of action that the studio is known for. After all, with an interface that controls almost entirely by finger swipes, how intricate could the mechanics possibly be? Thankfully, Severed is not only surprisingly deep, it absolutely nails its touchscreen controls, making this adventure game feel right at home on Vita.

Featuring the same playable level that we sampled last year, players control one-armed hero Sasha in first-person. The left stick is used to guide Sasha through the game’s dungeons, with a Metroid-style mini-map displayed in the upper right corner to show points of interest and undiscovered sections. Players will move through each dungeon, solving puzzles until reaching that area’s boss.

The touch-controlled combat is where Severed really shines, though. A simple swipe of your finger will slash Sasha’s sword in the same motion of your swipe. Enemies each have their own sections of armor and weakness, so swiping your finger in just the right angle, or with precision timing, is critical to victory. Enemy attacks can also be countered by swiping in the opposite direction of enemy visual cues that display on a timer. This makes encounters with numerous enemies at once an action-heavy slash-fest, with players needing to balance their attention between multiple incoming strikes. The combat feels completely intuitive, and yet with such a focus on strategy and timing, each encounter still feels like a puzzle on its own.

An added level of strategy comes in the form of Severed’s focus meter. Chaining attacks together causes the player’s focus meter to fill, allowing players to collect the severed limbs of their opponents. Achieving a full meter before the end of a fight triggers a slow-motion finisher where Sasha can slice off a monster’s limbs for a satisfying finisher.

Collecting the arms and legs of the monsters you’ve defeated allows players to upgrade their abilities using a skill tree. Various attribute boosts can all be unlocked, such as added attack power or a slightly longer countering window, and the developers at Drinkbox noted that more branches become available later on after acquiring some of the game’s unlockable power-ups and items.

After navigating through the demo and defeating the dungeon’s boss, Drinkbox was able to provide an overview of some of the more intricate challenges that players will face later in the game. In this particular mid-game dungeon, Sasha finds a pendant that displays the sun on one side and the moon on the other. She soon discovers that this pendant can be used in several of the dungeon’s rooms to alter the day/night cycle, with certain doors only open at a specific time of day. Navigating using the pendant requires a level of thinking and strategy that feels very reminiscent of the great puzzle solving you’d find in a Legend of Zelda-style dungeon.

Severed is shaping up to be one of the most exciting titles of early 2016. One part Infinity Blade, one part Zelda, and with all the same adventure qualities of Guacamelee, Severed looks to feature some great action fused with impressive puzzle design. Most importantly, though, Severed exemplifies fantastic game design all while making excellent use of Vita’s touchscreen. Severed is easily one of my most anticipated games of 2016 and is a title that all Vita owners should keep on their radar.

For more on Severed, and for all of our PSX coverage, stay tuned to Gaming Trend.