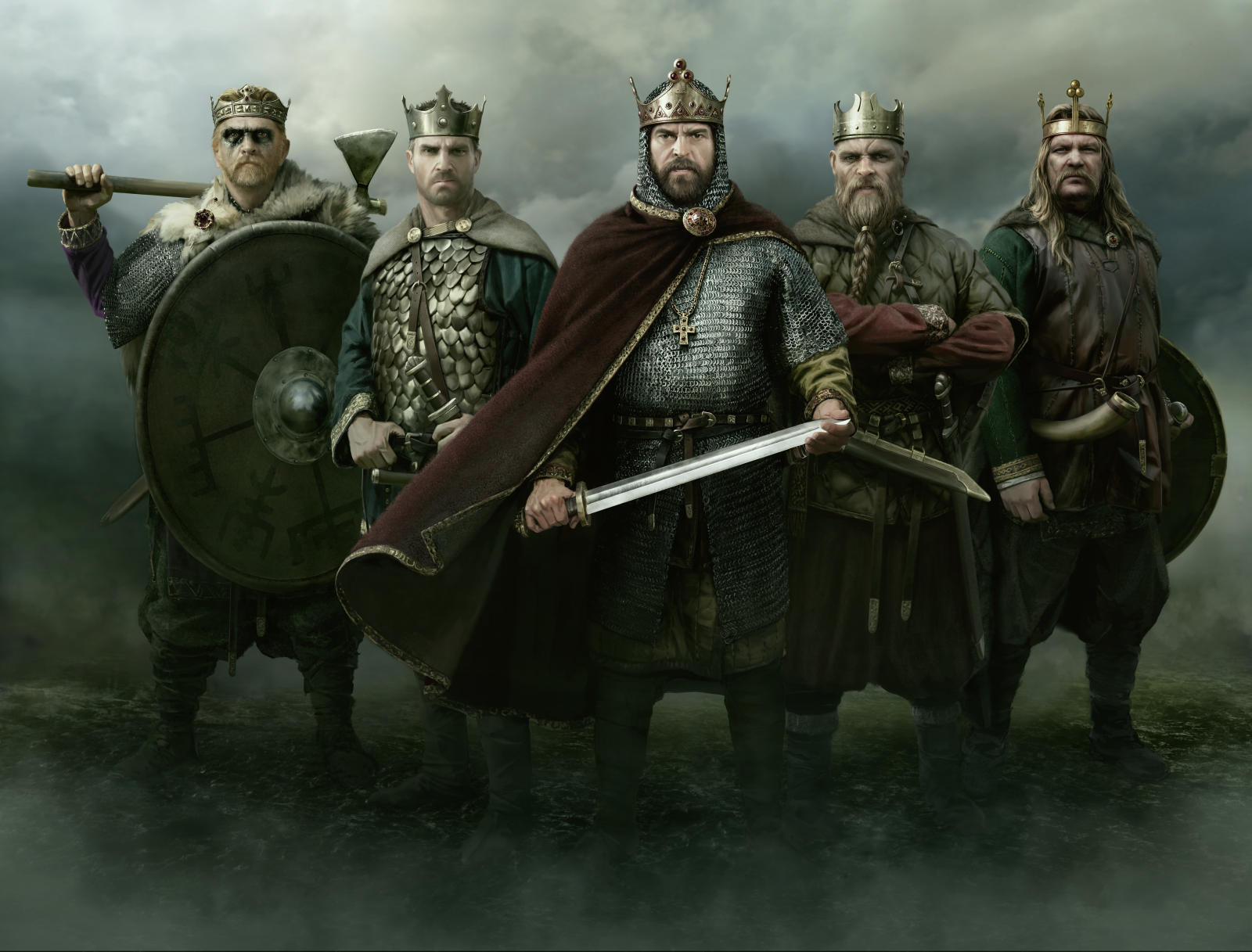 A massive, animated map of Ireland, as it was in 878 AD spread out before me, brought to life with wandering war bands, petty kingdom capitals, lesser settlements, and even the occasional wandering deer. In this hands-on demo A Total War Saga: Thrones of Britannia, the first for this title, I took on the role of Flann, the petty king of Mide, one of the ten playable factions in the newest installment of the Total War series. A beautifully animated cutscene, featuring characters drawn in the iconography style of the middle ages, set the scene: The British Isles have won a decisive battle against the invading Viking armies, who have settled across the land, and created a fragile peace. With ambitions of rising to become High King of the land that will eventually become Ireland, it was my job to build armies, protect my border, form trade agreements, alliances, and ultimately help my kingdom survive a bloody and uncertain period of history.

Mide is not a large kingdom, in fact it’s downright small and surrounded on all sides by potential enemies, (or potential allies!) and features little more than a capital city and a pair of lesser settlements. Like any good king dealing with the ever-present threat of roaming Viking hordes, I quickly invested gold into expanding my farms, then promptly set to work raising an army. My generals dug themselves in, raised their banners, and lo and behold, a new battalion of troops appeared! At least… part of a new battalion appeared. A very small part. You see, in Thrones of Britannia, troops don’t magically appear at your beck and call, it takes time for people to learn that you’re recruiting, to pack up their lives, and journey to where your armies are stationed. It’s not a simple matter of having enough gold and food to pay and feed them, recruitment is a process, and at times a very long one. The longer you stay put, the faster your ranks swell, whereas moving causes confusion for would-be soldiers and slows this process.

With my people fed and the call to arms raised, I gave into my inner menu nerd and began exploring every menu, checking out each portrait, and reading every description, tips, and world news I could get my hands on. There was a lot to read, a whole lot of it.

Thrones of Britannia is striking out in a new direction from the tried and true Total War formula. Gone are the massive maps which span continents and centuries, as they’ve been limited to the far more restricted area of the British Isles, large and detailed though the map is. It’s also a much more intimate type of campaign, one where each character, king and general have their own page, featuring their history, portrait, age, family tree, and personality traits. This more focused approach to both maps and characters gave me a surprising connection to my army and generals, even within the short hour and a half I had to explore the game.

I found scrolling through these pages a delight, and took the time to get to know a little bit about each of my generals, and, when applicable, their wives. Female characters don’t command armies, (at least not in Mide, and I didn’t get far enough to encounter any Viking spear maidens or women warriors of Ireland) but they are not insignificant to the game. Females in Thrones of Britannia come with their own stats which directly impact those of their husbands. A good wife can bolster the loyalty people feel to her husband, but her presence can also be a curse, serving to undermine reputation or repel the populace. While I wasn’t able to play long enough to dive deeply into the political side of gameplay, it was easy to see its potential. Through the Family Tree, marriage can play an integral part of any campaign, as encouraging the union of two strong characters could provide great benefits to your army, but marrying a stat-reducing daughter off to the heir of a rival kingdom could prove detrimental to his reign, doing even more to further your plans of world–err–island conquest.

Ending my turn advanced the game brought a whole host of new updates. A raven carried missive that the Viking king to the South had been baptized, but he wasn’t exactly acting very Christian. He had co-opted at least one other power, and advisors warned that we should be prepared for raiding parties to arrive within a few months. General gossip spoke about unrest in a neighboring kingdom, and then, much to my surprise, a message came from my neighbor to the west to request a trade agreement. Unlike trade agreements in some of the other Total War titles, this wasn’t a struggle. I didn’t have to create any special route between our capitals or bribe my way into it at great cost, it was just blessedly there, waiting for me to accept. I’m happy to say that this was not an isolated incident; Mide, being located near the center of the island, was superbly situated for trade, and trade agreements continued to be offered and accepted over the next hour.

A few turns in and I was confident, boasting a slowly growing army, a defensive agreement with a neighboring kingdom, and plenty of gold and grain under my belt. That’s when the raiding parties arrived. Steeling myself, I ordered my men to brace themselves at the border as I scrambled in vain to send more troops down from my capital, and simply had to watch as a much larger Viking force closed in on my fledgling army. The Battle Map opened, showing my hopelessly outnumbered band of spearmen formed up on the opposite side of the map from the three Viking squadrons. They held their position, and I needed to buy time time, because this was going to be a slaughter.

Then a cry sounded: “Reinforcements have arrived!” It was music to my ears. True to their word, my allies arrived with ranks of horses, spears, and arrows. Commanding the squadrons was easy and familiar, allowing me to decide which formations to put the troops into, who should charge and who should flank, and the best way to funnel the routed Normans towards my still-fresh, slowly advancing Mide forces so I could finish the battle in the bloodiest way possible. In this respect, the game is undoubtedly a Total War title, bringing short, intense bursts of the familiar and satisfying real time battles which fans have come to know and love.

The Norman threat quelshed for the moment, I set to the more mundane business of managing a kingdom, growing an army, and keeping said army fed. I also invested time in building up churches, as Mide in particular received significant cultural boosts from its churches, being the first Irish nation to convert to Christianity. My network of allies and potential allies continued to grow, and I earned even more good favor by successfully hosting the Fair of Tailtiu, a special event unique to Mide which occurs once every three years and boosted both the happiness of the people and increased my status with my allies.

I also took some time to sit back and just look at the map. Zoomed out, it’s lovely enough, with its many tiny kingdoms forming a confusing, almost overwhelming patchwork of borders. Weather rolled by, bringing rain, mist, and clear skies, water in lakes sparkled in the light and trops and wagons moved about as turns progress. Upon zooming in, I found a real treat; the world was peppered with detail and animation. Wolves roamed near woodlands, falcons swooped across the sky, and bugs hovered in small swarms, all working together to breathe life to the land that I was trying to defend and claim as my own. This kind of detail fits perfectly with the approach that Thrones of Britannia is taking, I’ve never before felt quite so attached to the area I was defending, just as I’ve never quite felt so proud of amassing a large army, or worried about what kind of a woman my general was going to marry.

The days of frolicking happily in the Irish countryside were not meant to last, by this point my people were feeling the effects of War Fervour. Peace and prosperity had made the kingdom restless, leaving them to wonder if their king was simply a coward, negotiating his way out of battles. With limited time, and the urge to pick a fight just to see the fallout, I made a stupid decision. I gathered up two of my raiding parties and sicked them on the nearest settlement. It was an act of war, and my men cheered as they sacked the sad little town, beat down a small defensive force, then fled back across the border.

Much to my surprise, while armies amassed along the border, they didn’t charge straight into battle with my units. Just for giggles, I offered a peace agreement with the kingdom I’d just raided, the terms being peace and nothing more. To my utter shock, the agreement was accepted without any negotiations or payoffs. Not the smartest move to make in a full campaign, but a fun experiment as I was fast approaching the end of my time with the demo.

It’s worth noting what wasn’t included in the demo… or the game itself: the Agents system is not a part of Thrones of Britannia. While elements of this system are still present in the game, they’ll be handled very very differently, and unlocked by upgrading your generals and governors, and helping them to gather devoted followers. While I was not able to get nearly far enough into a campaign to experience these, the change in tactics seems to suggest a far less disruptive mechanic this time around.

Thrones of Britannia is a new and very different approach for Total War. The entire campaign feels much more personal, and will certainly lend itself very nicely to role playing. Success in campaigns can depend as much on alliances as it does on winning battles, a well planned assassination and wedding to an heir can turn a hostile neighbor into an agreeable ally, cunning and discretion are required to successfully manage your own Family Tree, and the decision to retire an aging but well loved, successful general can be as heartbreaking as watching your hard-earned troops die in battle. This isn’t a game where the biggest army always wins, it’s a world where factions die out as quickly as the third turn, the death of a king can weaken or break your regime, and one random event can throw the entire map into chaos.

A Total War Saga: Thrones of Britannia will be available for PC worldwide on April 19th, 2018, and will feature ten playable factions, five different cultures, and a host of random events which can change the flow of any given campaign.