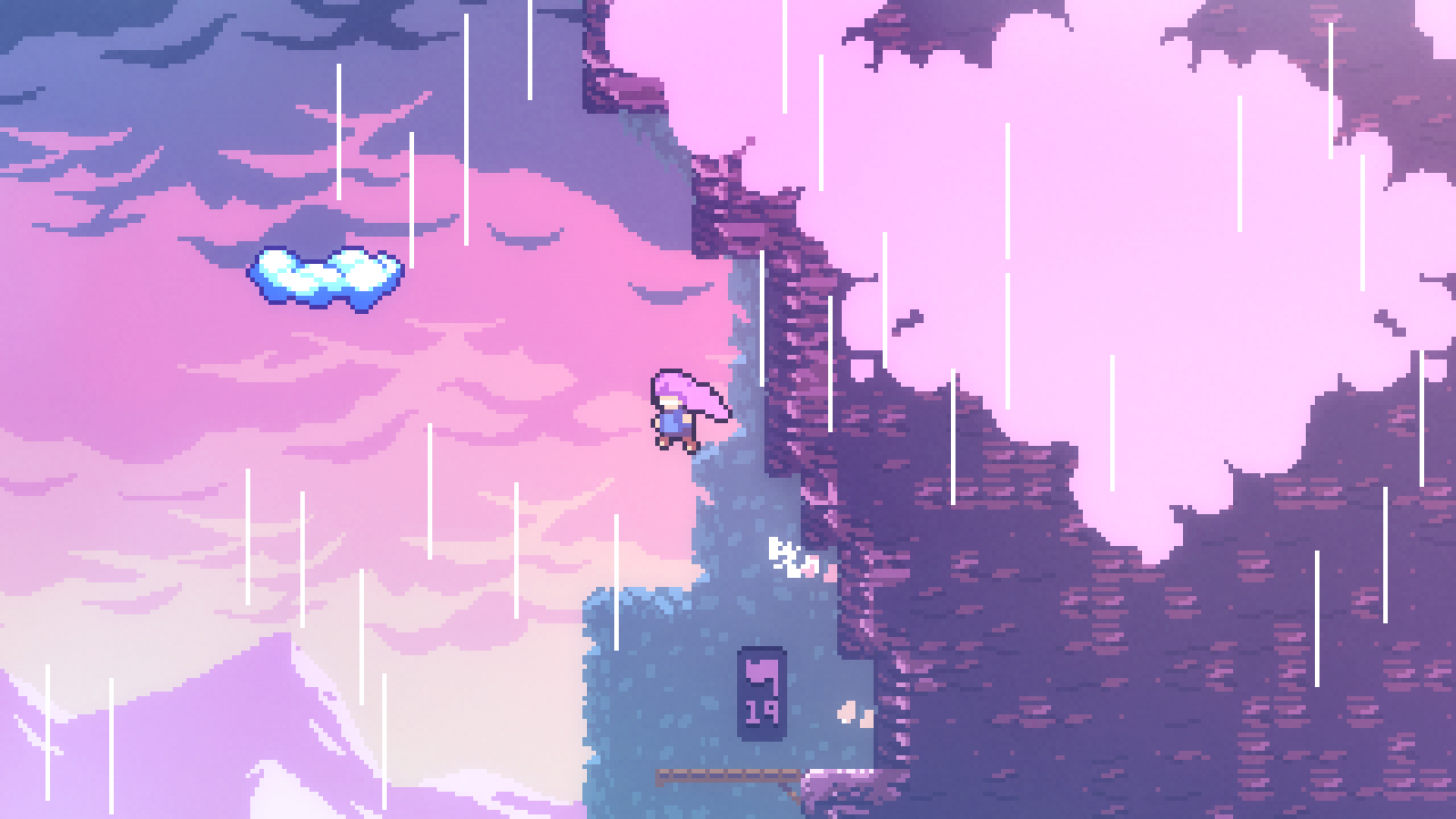 For those unfamiliar with the series, Scarlet Moon Records has been releasing soothing renditions of popular game soundtracks under the Prescription for Sleep banner for some time now. The goal is to translate the excellent scores from games as varied as Dark Souls and Undertale to fit a more placid theme. Whereas the music in those games may have perfectly fit the experience of playing them, Prescription for Sleep aims to provide something a little easier to listen to outside of the context of the game. The latest entry in this series is for Lena Raine’s excellent soundtrack to my personal favorite game of the year, Celeste.

Lena Raine isn’t new to video game music. She tells me she has previously worked on the Guild Wars 2: Heart of Thorns soundtrack, as well as Dead State and Hackmud, but she had much more flexibility in working on Celeste.

“The main difference honestly was how integrated into the team I felt,” Lena told me. “My experience with [Guild Wars 2] was unique since I also worked as a designer, but with the latter two, I mostly got a list of music to write and played development builds and the music was implemented without much say from me. With Celeste, I worked super close with all the developers to make sure the music was implemented exactly as I envisioned it, which was such a wonderful freedom to have.”

It shows in the final product, as the music, alongside the narrative and gameplay brilliantly feed off of each other and build into a complete package. Having been brought onboard only about 6 months in to the production of the game, she says she was able to “[keep] pace with the rest of the developers as [they] filled in the rest of the game.”

If you haven’t played it (and you should), Celeste is a 2D platformer that demands hard focus and precision while the tightness of its controls paradoxically allows you to slip into a sort of trance as you bang your head against its tougher challenges. The music in a game like this is crucial to the overall experience. An earlier example of this style of platformer, Super Meat Boy, had music that fed into the gameplay loop by continuing even as you respawn over and over. The difference there was that game relied on a harder, more intense soundtrack to keep you constantly on edge enough to keep going. Lena Raine took the opposite approach.

The narrative of Celeste also has a much more somber tone than its more harried forebears, which is reflected in its score. Of her approach to the soundtrack, Lena said, “What I set out to do for the music for most stages was, instead of stressing out the player, to write music that soothed them instead. It’s a lot like what I would have been wanting to listen to while playing since I often get more and more frustrated and stressed out when the music in hard games makes the difficulty amplified. So instead of doing that, most of the music has a nice groove to it, and grows in complexity as you proceed, so you’re rewarded for your progression and it doesn’t get too repetitive.”

It’s the perfect setup for what Norihiko Hibino, the composer for the Prescription for Sleep series, did with his interpretation of the music. The album’s opening track, “Dreams,” sets the stage excellently for what’s to follow. It has an appropriately sleepy, smooth-jazz-inspired feel that captures Lena’s stress-free intention while allowing the rest of the album to build over time.

Hibino-san is no stranger to game soundtracks himself, and his app, Prescription for Sleep, is the direct inspiration for the title of the series. Jayson Napolitano, one of the producers of the the album, said, “When I launched Scarlet Moon, and knew I wanted to produce some of my own arrangement albums, I knew I wanted to focus on game music as a lifestyle. I’d written some top ten lists about game music for sleep, the holidays, and the gym, and thought it would be fun to tackle an album intended for sleep. Given Hibino-san’s new life mission to help people with music, I thought he’d be the perfect collaborator, allowing us to tie together his history in video games with this new mission. When it came to naming the series, I wanted to call it ‘I Feel Asleep,’ which is one of the first lines featured in the original NES Metal Gear given Hibino-san’s ties to Metal Gear as the composer of Metal Gear Solid II and III (and contributor to IV and Peace Walker), but talking it over with some friends, somebody suggested Prescription for Sleep given that Hibino-san’s app was so popular, so we went with Prescription for Sleep: Game Music Lullabies to differentiate our album series from the Prescription for Sleep projects that came before it.”

When looking for music to cover, Jayson says it is “rather self-serving in that it’s music that I like.” This is why he says publishers like Nintendo and Square Enix are “probably over represented in our catalog.” So when Celeste came along, Jayson got the idea to cover it. He met Lena at GDC 2018 and wanted to “gauge her [interest in the] idea of Celeste being our next album, and it was her excitement about the idea that really propelled it forward. If she had been disinterested, this likely would have never happened.”

I’m glad it did, though, because getting to hear covers of the memorable bits from tracks like Madeline and Theo is a soothing reintroduction to the themes of the game while it also plucks at the young but powerful nostalgic twinges I have for Celeste’s score. As the game reaches its crescendo and Madeline makes her way to the summit of the titular Celeste Mountain, the music matches the intensity a bit more. The music felt like it tapped into the nervous and self-doubting heartbeat of its protagonist and of the player as they struggle through some of the game’s stiffest challenges. It effortlessly does this while maintaining the same understated and introspective themes.

I asked how it was translating this into something with a more sleepy sensibility and Hibiko-san told me, “Well, we realized early on that this album would focus more on self-realization than on sleep as we’ve done with past releases. ‘Reach for the Summit’ was one of the highlights of the album for us. I’m not sure if what we produced is relaxing, but we really put a lot of effort into this performance and were inspired by Madeline’s final ascent, discussing it a lot before recording.”

Tracks like “Reach for the Summit” and “Heart of the Mountain” are some of my favorites from this album. They manage to capture the spirit of the original while offering the unique Game Music Lullabies twist that accentuates what was already present in Lena Raine’s score with a quieter tone.

When I asked Hibino-san what difficulty, if any, he faced in interpreting Lena’s music he said, “Honestly, it hasn’t been too challenging so far. Rather, it’s been very inspiring as the concept for these albums is often quite clear. For Celeste, for example, we focused on Madeline’s struggles with her own personality, and the original FM-style sound from that game is great at expressing these emotions. We really enjoy arranging and performing them.”

I’ll admit that the album is certainly not for everyone. Its quiet and reflective tone is targeted at a very particular audience, but if you are a fan of Celeste and Lena Raine’s score, this album seamlessly sits alongside the more 8-bit, electronic style to provide a different take on a beautiful soundtrack. You can find the album on iTunes, Spotify, or Bandcamp, but there is also a limited edition physical CD available from Scarlet Moon’s Bandcamp page, or you can just head over there to get a taste of what they do for yourself. It’s a beautiful album that doesn’t replace but rather enhances what was already there in the game, and for $10, I recommend giving it a listen when you’ve got some time to yourself where you just need to unwind. When the album is through, though, if you haven’t already, go play Celeste. I mean it.