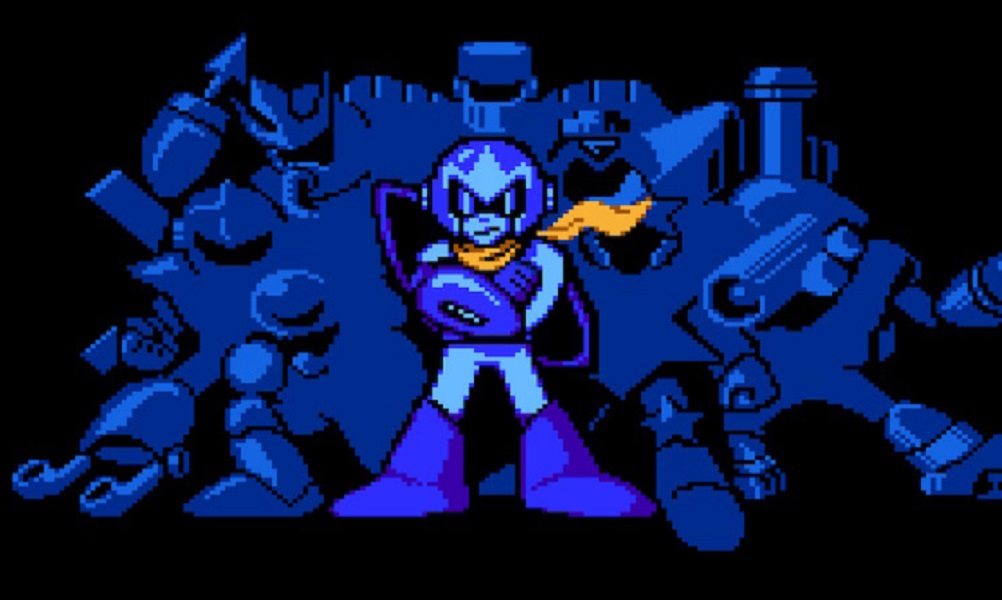 Just like Mega Man 2 builds upon the first Mega Man, Mega Man 5 feels more like it’s trying to do everything Mega Man 4 did but better. It has hidden collectibles, two sets of final stages, and a dude with a train on his face. But despite these minor tweaks, there aren’t any groundbreaking additions in this entry. As we’ve reached the halfway point of our retrospective series, has the formula to Mega Man gotten stale?

Once again, Mega Man enjoys a brief period of relaxation. It had been 2 months since Dr. Wily’s latest defeat. Mega Man, curious about his mysterious brother, asks Dr. Light about what kind of person Proto Man is. Before he could answer, Dr. Cossack interrupts the two to inform them that the newest support robot, Beat, has been completed.

As Mega Man visits the new ally, Dr. Light receives word about a mysterious group of robots attacking the town. The most shocking part about this news is that the group is seemingly being lead by Mega Man’s own brother, Proto Man, who kidnaps Dr. Light.

After fighting through these eight new Robot Masters, Mega Man confronts “Proto Man” at his hideout, only for the real Proto Man to show up and reveal that this Proto Man is a copycat named Dark Man. Dr. Wily had created Dark Man to frame Proto Man for betraying him at the end of Mega Man 4.

Once Dark Man is defeated, Dr. Wily appears, confessing his plan to hurt Proto Man’s reputation. He informs Mega Man that Dr. Light is a captive and challenges him to take him on at his new castle. Dr. Wily, of course, doesn’t stand a chance. As the castle begins to collapse, Mega Man holds up the ceiling, saving the now-rescued Dr. Light and allowing Dr. Wily to escape yet again.

At this point, the new additions to the Mega Man series’ NES entries become less substantial. Mega Man 5 doesn’t add any groundbreaking mechanics, but it does add a few quality-to-life additions.

Each level will contain a secret letter from the game’s title. These MEGAMANV letters are found one-per robot master and will give you access to a special new weapon when all are found. This special weapon is the series debut of the robot-bird helper, Beat. When activated, Beat will squeak and make a mad dash for any enemies daring to be within the same vicinity as the Blue Bomber.

The Rush Coil has been modified as well. Instead of a standard spring upward, the New Rush Coil makes rush bounce upward, giving you the ability to jump once the bounce reaches its peak. This is an interesting change, but it’s more disorienting than a simple boost forward. The third helpful move isn’t a Rush move this time either. Instead, it’s another variant of the Rush Jet (which is still in the game and functions as normal) called the Super Arrow. However, the Super Arrow only speeds off in one direction at a time.

Besides these additions, there are only a few tweaks to the base game play. Mega Man’s power shot has a new animation, but it functions the same as it did previously. However, there is a new “Mystery Tank,” which is basically a new kind of Tank that fills up Mega Man and all of his weapon energy. If there isn’t any energy to refill, all weak enemies on screen will be turned into extra lives.

Mega Man 5 feels like a late-stage NES title. It takes several art direction and play style risks that Mega Man 4 failed to deliver upon. When Mega Man is on a spinning platform, his sprite spins. It looks goofy, but it’s also impressive with how smooth it looks for an NES title. Gravity Man also features one of the most interesting mechanics in a Mega Man level up to this point, but we’ll talk about that a little later.

There is also a distinct lack of annoying sub-bosses and enemies with invincibility. While there are a few that can’t be hit at certain times, they are completely manageable. Collecting the MEGAMANV letters is also fun and rewarding. While Beat may seem lame at first, he’s actually incredibly useful, especially against the final boss.

Having two fortresses still feels like a waste, however. This time, we’re well aware that the first fortress is going to be a fakeout, yet we run through it anyway. When it’s revealed that this isn’t the real Proto Man, of course Dr. Wily is behind it.

As I recently mentioned, Gravity Man has one of the most interesting mechanics in Mega Man V. Throughout the stage, there are arrows on the wall telling the player whether the gravity is normal or towards the ceiling. This creates interesting situations where you have to decide whether jumping to a normal gravity section is safe or not.

Gravity Man’s special weapon is another “entire screen” effect weapon, but it’s satisfying to use against flying enemies. When activated, all enemies affected on screen are simply… pushed away to the top. Their sprites flip to acknowledge this, and it looks incredibly silly.

The fight against Gravity Man is interesting as well. He’s not difficult, but his pattern can give you a different perspective to the fight. After a few shots, he will switch the gravity. Mega Man will also be on the opposite side of Gravity Man, making the best time to hit him mid-gravity switch while you’re briefly at the same height. During my entire fight, I didn’t jump a single time, and it felt completely natural.

Crystal Man’s stage has one of the worst hazards I’ve ever encountered up to this point in the series. Throughout the stage are various chutes that drop crystals. These crystals cannot be destroyed unless you have Star Crash, which destroys the barrier-based weapon anyway. The timing of the crystals doesn’t appear to be consistent, either. If you’re hit by them, there’s a strong chance that you’ll be dropped into a bottomless pit or a spike pit.

There are also enemies that charge up and shoot crystals straight forward. These crystals can’t be destroyed with the Mega Buster, making an annoying barrier to get past. They even can’t be hurt easily when they’re charging up this attack. When this is paired with falling crystals, it becomes an annoying road block at best.

Crystal Man’s fight isn’t terrible though. He throws crystals that bounce around the screen while he jumps in the air. Occasionally, he’ll jump in the air and send a single shot towards you, but it’s not anything that can’t be managed.

Mega Man 5 is very much a “middle of the road” Mega Man game. It’s basically 4 with a few quality of life enhancements and unique level elements. The “second set of final stages” stretch returns, and is just as disappointing when you reach the end of the first one. But this doesn’t mean that the series has become stale. Mega Man 5 still stands on its own when compared to the four entries before it. It’s trying to build upon the formula, not change it, and that’s not always a bad thing.

We’ve reached the halfway point of the Retrospective series, and we’re almost at the end of the NES titles. For three titles consecutively, Dr. Wily has escaped. But, of course, all good things must eventually come to an end, and Mega Man 6 was ready to put the NES series to rest.