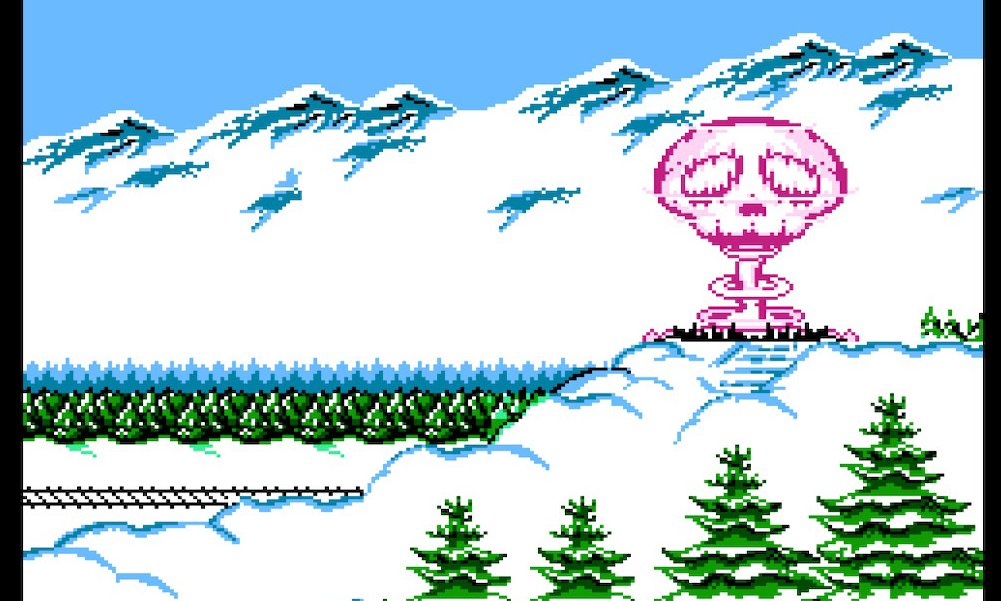 By 1990, the formula of Mega Man had been ingrained into gaming history. With this pattern, the latter half of the NES series had the issue of following the same formula without mixing it up as much as the first three titles did. However, each title did contribute a new element to the series in some way.

For example, Mega Man finally has his full range of base abilities in Mega Man 4. While Mega Man 3 added rush and sliding, this entry added a way to power up the good ol’ Buster. But is charging the only thing that differentiates Mega Man 4 from its predecessors?

From his Siberian citadel, Dr. Cossack introduces himself to the world. To show everyone his might, he reveals eight of his most powerful robots to take on Mega Man. After getting this warning, Mega Man, along with his New Mega Buster, goes after Dr. Cossack to stop the attack.

As Dr. Cossack is about to be defeated, Proto Man appears with the new doctor’s daughter, Kalinka. She begs Mega Man to stop and reveals that she was being held hostage by Dr. Wily in order for Dr. Cossack to create the eight powerful robot masters. This means that, despite popular belief, Dr. Wily survived his last encounter with Mega Man.

To teach him a lesson once again, Mega Man departs to Wily’s citadel to defeat them. But, history repeats itself when Dr. Wily yet again narrowly escapes capture before the citadel is destroyed.

The newest addition is more obvious than Mega Man 3’s innovation with sliding. Finally, after three entries, Mega Man can power up his mega buster with the “New Mega Buster”. This power shot is one of his most iconic moves, and this is where it makes its debut. To activate, you only have to hold down the fire button, making it easier to stumble across than holding down and jump.

Besides the power shot, there aren’t any groundbreaking additions. Eddie will occasionally appear to give you a helpful item, but there aren’t even any mid-boss fights as interesting as Proto Man.
Hidden support items do appear for the first time since Mega Man 1, however. Two of them are hidden throughout the various levels and are a balloon that rising up slowly (like Item-1 in Mega Man 2) and a grappling hook to pull yourself to the ceiling.

As there is a new doctor in town, the four end-game levels featured in Mega Man 3 have been replaced with a second fortress-segment of levels. This leads to a fake-out that brings you to the real final stretch of levels at Wily fortress.

Unfortunately, the Mega Man series didn’t continue its upward trajectory the way the previous games did. While having a power shot is cool, it doesn’t create as many clever avenues to train players to use it as effectively as Mega Man 3 did with the sliding mechanic. There were moments where it could be used against a certain midboss to make its platform lower, but there were plenty of special weapons that got the job done much more effectively.

The enemies seemed to be recycled much more in each level this time. I probably wouldn’t have noticed if they weren’t so bland and frustrating, but several of these enemies have sections of invulnerability that makes you waste your power shot. This could be seen as a way to train players to time it better, but it comes off more as frustrating.

Replacing the “four levels post-eight robot masters” with another set of Wily Fortress levels was also a lackluster idea. You don’t have a choice on how to progress through these, and once you’re at the end, you’re presented with another set of levels. Paired with the fact that you can’t use a password past the first fortress makes it a slog. This also lessened the impact of the reveal that Wily was the bad guy all along.

Pharaoh Man’s stage comes off as immediately cool. With a starry background and the sinking sand pits, it’s obvious that you’re in a desert setting as you make your way to a pyramid setting. The sinking sand could be annoying, but the enemy type and placement make it manageable without anything feeling unfair.

The interior of this stage also has a unique enemy that’s as fun to look at as he is silly. He’ll flip from behind the wall and unravel his head, throwing it at Mega Man. Then, if his body isn’t destroyed fast enough, he’ll flip around the wall to come back with a new head.

The fight against Pharaoh Man is manageable. He throws sun-like orbs at you while occasionally charging up a larger blast. In a way, this feels like a mirror fight showing off that yes, even a robot master can charge their shots now. But, this only means that the Pharaoh shot is the only special weapon that can be charged.

Mega Man 4 has the privilege of not having any “terrible” stages, or even any robot masters that can’t be seen as “bad,” though Dive Man is the “least ok” of the Robot Masters. Its stage takes place half in the water, which is appropriate for a submarine featured boss, but it’s riddled with enemies that are impossible to damage with the mega buster.

The secret item found in the stage is found by falling down a spike bit, but instead of sending you slightly forward like in Pharaoh Man, you’re sent to before one of the whale sub-bosses, which like to track your movements with giant missiles, suck you in towards the spike, and cause massive slowdown on the screen.

Dive Man looks basically like a smaller Hard Man with an antenna, but his fight can be ridiculously simple. After shooting a torpedo or three, he will spin towards you with that frustrating invulnerability Ring Man was sporting back in Mega Man 3.

With Mega Man 2 and 3 being tied constantly for “best original series Mega Man title,” it’s a shame that Mega Man 4 follows more in its footsteps. The addition of the ability to charge your shots is innovative, but that was actually a feature of Heat Man’s special weapon back in Mega Man 2 if we want to be technical.

But Mega Man 4 is still a good title, as we have yet to see what a “bad” Mega Man game looks like. As Mega Man’s core abilities have finally all been released, what can we expect to find in Mega Man 5? And, by the way, besides that brief moment near the end of the game, what has Proto Man been up to?