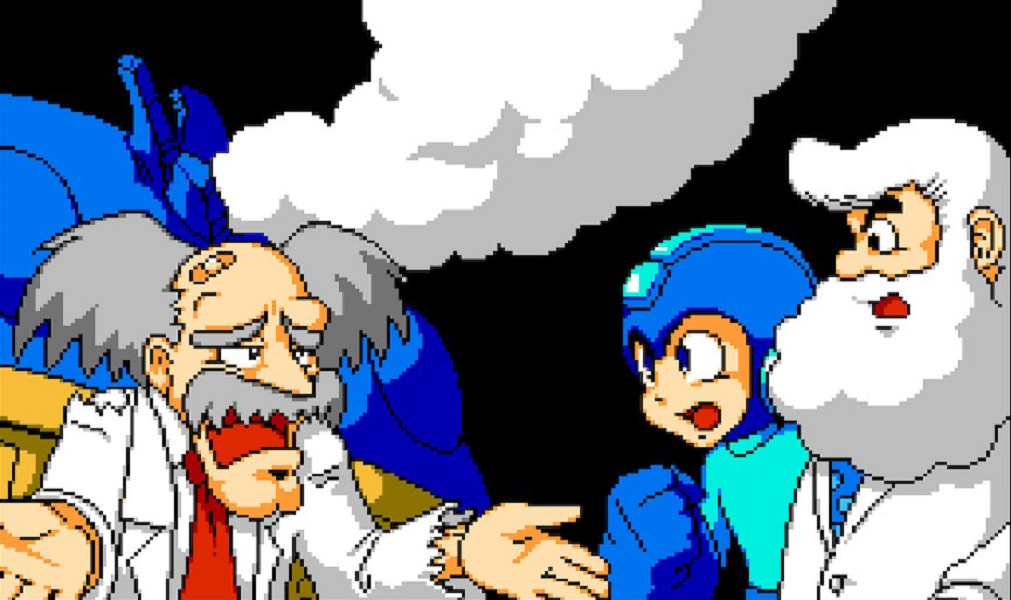 Undeniable to everyone, Mega Man 9 was a huge hit. Going back to the classic formula was exactly what Capcom needed to do for the series, and the sales proved it. Just over a year and a half later, Capcom decided to make lightning strike twice and create a follow-up with Inti Creates help yet again.

When I learned about Mega Man 10’s existence, I rolled my eyes. While I loved Mega Man 9, I felt like making another one felt like riding the coattails of success. How could this entry possible be good? Eventually, when it came out, Mega Man 10 wasn’t only good, it was a celebration of 10 entries of Mega Man.

Everyone’s got the robo-sniffles (story)

Suddenly, Dr. Wily’s appears at Dr. Light’s lab with his capsule damaged. According to Wily, 8 Roboenza-infected robots attacked him and stole parts for a medicine-making machine that will create a cure for the outbreak. Mega Man agrees to retrieve the stolen parts, but before he leaves, Proto Man appears to offer his assistance.

During this period, Dr. Wily and Dr. Light develop a prototype cure for the virus. It’s given to Roll in hopes that it will heal her. For now, it seems that Dr. Wily really is on the “light” side this time around.

However, once the two obtain all eight of the machine parts stolen by the new robot masters, Mega Man collapses, having been infected by Roboenza himself. Dr. Wily then reveals that it was him behind the outbreak the entire time. If any robot wanted a cure, they’ve have to swear allegiance to him. Roll, having held onto the prototype cure in case someone else needed it, gives it to Mega Man, who regains his energy to take on Dr. Wily.

Mega Man storms Dr. Wily’s latest fortress. After defeating his latest Wily Machine, he escapes to his space base. There, Mega Man confronts Wily in his latest Wily Capsule and defeats him easily. As the mad doctor is begging for mercy and Mega Man calls him out on doing this several times before, his face turns red. Dr. Wily himself has gotten sick, but with something other than Roboenza. Mega Man transports him to a hospital where he is cured, and escapes out of the window.

Dr. Wily wasn’t completely ungrateful for Mega Man saving his life, however. In his hospital room, Dr. Wily leaves behind was a large supply of the cure for every infected robot to be restored to normal.

Mega Man 10 largely builds upon the framework Mega Man 9 set up. He still only has his two functions: jump and shoot. This time, Proto Man is available from the start of the game. Like Mega Man 9, he features all of the moves Mega Man had at the later half of the NES titles as well as a shield when he jumps.

Bass makes an appearance as well, although in the form of DLC. He has a dash attack not too different from Mega Man X’s, but you aren’t able to jump with it. His buster is more of a machine gun that can be shot in several directions. Finally, he doesn’t have a support item like Rush Jet, but Beat does attach to him to form a suit capable of flying briefly.

Difficulty modes are also available in the base game. Instead of only having harder ones that add more enemies, there is an easier mode that decreases the number of enemies and creates safe platforms over hazards such as spike bits. Later on, players may need it, but they have to make their choice of difficulty at the beginning, as it can’t be changed later on.

Time trials return, but this time there are three special stages instead of 1. Also, there are three unique bosses, Enker, Punk, and Ballade, that return from the Mega Man gameboy series of games. Defeating each of these bosses earns the player a special weapon exclusively for Mega Man for use in the main game and Time Trials.

Mega Man 10 surprised the hell out of me. It took everything Mega Man 9 did and dialed it up a notch. The inclusion of Bass is interesting, and having Proto Man at the start makes him feel more integral to the story, even receiving his own dialog in his fight against Dr. Wily. The DLC still appears to be disc-locked, but it’s not nearly as bad, as its only holding back Bass, the endless stage mode, and three special stages.

Inti Creates knew that they couldn’t get away with banking on nostalgia for this game. They had to use the 8-bit aesthetic and make something unique out of it. That’s how we ended up with interesting stages such as the technology stage with the mouse-pointers in Sheep Man’s stage, or the sports-themed hazards of Strike Man’s stage. Though, there are a few run-of-the-mill stages, such as a water stage and a fire-themed stage, but those have memorable points as well.

Mega Man 10, in its celebration of the entire original series, has the hardest set of Wily Castles I’ve ever encountered. The first stage alone has three different segments where you have to take out three machines that mimic Robot Master moves, picking one from each of the 9 games before it. While Wily himself isn’t his hardest version (that still goes out to Mega Man 7’s Wily Capsule), he does have one of the coolest final area stages.

Honestly, at this point, the stories of the Mega Man games have always felt like they were “just there” for me. I had a problem with Mega Man 8 because of how it handled its ending, but I never put much faith into a gripping narrative. However, Mega Man 10 has me strangely invested in what story they have. It’s obvious that Dr. Wily was going to betray everyone (come on, it’s Mega Man), but the final shot where he leaves behind enough cure for everyone showed more development for Dr. Wily’s character than over 20 years of entries.

Who doesn’t like Optimus Prime? He’s a truck and he’s a giant robot; it just works. Nitro Man is similar in that vein, but he opts for a sports car instead. In many ways, he is similar to Turbo Man, with a weapon similar to Snake Man’s and Metal Man’s combined. Instead of a car, he becomes a motorcycle, and instead of a wheel of fire, his weapon creates a metal blade in front of you, which skates across the room and up the wall when released.

The stage is beautiful in many ways. It’s a metropolitan area at night and keeps that busy-city theme throughout the stage. Several of the enemies have wheels such as one that has its top half shoot off diagonally firing away from it if you shoot the bottom half.

Throughout the majority of the stage are vehicles that zoom on by to damage you. They can be jumped on and ridden, but they also give off a horn before they appear. The first time I encountered one, the horn alone gave me the urgency to jump, and I was never actually caught off guard. It created a tension for these segments, especially when spikes are placed at the top to prevent you from riding for too long.

There was a trend with this series of retrospectives. Most of the “worst Robot Masters” weren’t actually terrible, but had some irredeemable quality to them. This is especially true with Chill Man. His stage is beautiful, and the feature of blocks that break if you jump on them twice is an interesting hazard, but the issue lies with the special weapon.

There have been plenty of ice-related weapons in the fast, most notably the Freeze Cracker from Mega Man 7 that allowed you to shoot in any direction. However, Chill Man’s has possible the most disappointing ice weapon, the Chill Spike. This weapon has a short range, and when it hits the ground, it produces a short row of ice spikes. These are only really useful for Nitro Man when he’s in his bike mode. Otherwise, the short range makes it more of a hazard than anything to use.

His fight revolves around him using the chill spike. Depending on the difficulty, he will fire several numbers of these spikes, which are more annoying to dodge than they are strategic. Otherwise, his fight isn’t too terrible. The biggest downside of him is by far his special weapon.

Mega Man 10 hits that sweet spot of difficult, creative, and fun. While robot masters like Sheep Man may seem like they’re scraping the bottom of the barrel, the level design more than makes up for it in that regard. Having not just one, but three characters to play as was a good change of pace as well, giving players more incentive to replay through the game.

I can’t say that I’m not disappointed with the fact that it’s still focusing on Mega Man using his most basic moveset. Sliding and even charging proved to have a positive effect on the level design, so limiting them to an optional character cuts out any chance to use these moves effectively. However, this is the last time Capcom will go back to the 8-bit formula. In Mega Man 11, they will be embracing the future with a 2D with 3D models aesthetic. But, that’s for the future to bring. And this wouldn’t be a “retro”spective series if it was focusing on future titles, would it?

Mega Man as a series has been around longer than some of the staff members here at Gaming Trend have been alive. If a series reaches the double-digits for its entries and hasn’t changed up the formula significantly, it has the risk of becoming stale. Fortunately, I never felt that with Mega Man.

While there were a few entries that shine less brightly than others, there weren’t any that can be considered bad games. Each entry did exactly what it was supposed to do: examine the previous entries, improve on some elements, take a few new risks, don’t fix what isn’t broken. And after analyzing 10 Mega Man games just over two months, “don’t fix what isn’t broken” can be the series mantra.

With the retrospective series of all 10 classic-series Mega Man games coming to a close, we look to the future for the Blue Bomber. While the past 8 years have been rough for him with several games getting cancelled including Mega Man Legends 3, he’s finally getting his chance to shine once again in Mega man 11. Thank you for sticking with us through this journey to 20XX, and we hope to see you watch Mega Man’s triumphant return with us in the not-to distant future.