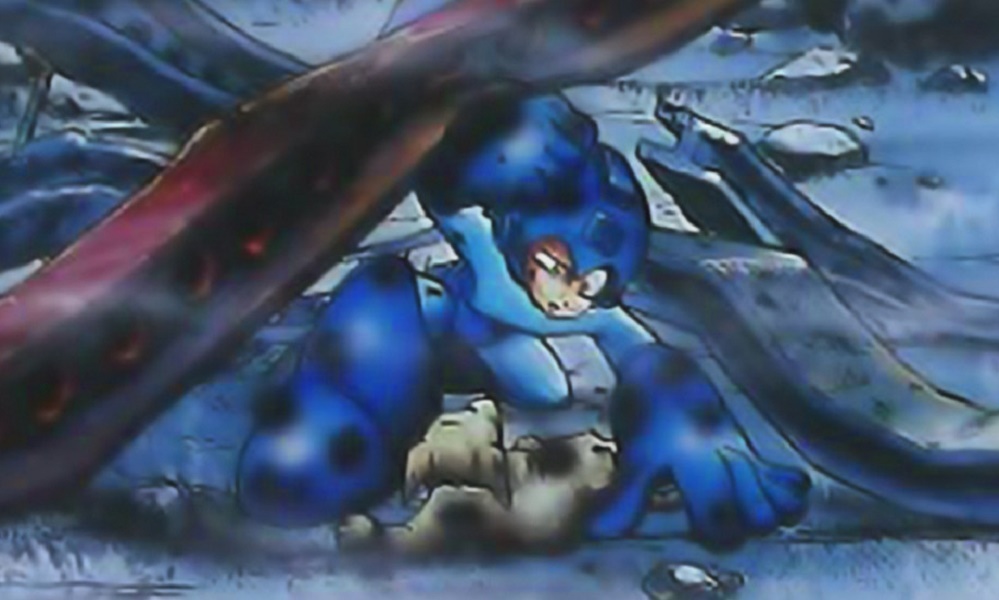 It’s time to ditch roman numerals, as Mega Man has made its way to the original PlayStation. Being released a year after Mega Man 7, Mega Man 8 follows several trends its predecessor does while ignoring the X franchise running alongside it. Unlike 7’s inclusion on the Super Nintendo, Mega Man 8 is actually the first title made for the PlayStation if we’re not counting the X3 remake. With a fresh coat of paint, does Mega Man 8 fix the issues of Mega Man 7?

Mega Man and the origin of evil (Story)

Far above the Earth, two powerful beings fight an intergalactic battle. One encompasses good, the other a being of pure evil. After a lengthy battle, they collide for the final time, sending each other hurtling towards Earth.

Back on Earth, Mega Man, accompanied by Rush, is having an intense fight with Bass in the city. To Bass’s dismay, the battle is shortened when Roll calls Mega Man back to the laboratory. And just like that, playtime is over, and the kids have to go home for supper. Back at the laboratory, Dr. Light informs Mega Man that a mysterious meteor has crashed onto a remote island, causing them to investigate.

At the impact site, Mega Man runs into Dr. Wily, who steals a massive amount of energy from one of the robots. The injured robot at the scene, Duo, is sent to Dr. Light’s lab for repairs as Mega Man rushes off to fight Dr. Wily’s four new Robot Masters.

Upon the first four Robot Masters’ defeat, Mega Man brings the evil energy harvested from them to Dr. Light. During their conversation, Duo escapes, causing Mega Man to chase after him and fight him. However, Mega Man noticed that Duo was holding back. They both come to an understanding and Duo explains to Mega Man that an incredible evil energy has been released onto the world and Dr. Wily has harvested it. Four more of his Robot Masters contain this energy, and it must be collected to enter the next Wily Tower.

Mega Man defeats the other four Robot Masters and collects their energy, making his way to Wily Tower. In the Tower, he encounters Bass, who absorbed some of the evil energy to power up, but the energy was dissipated once he was defeated. After fighting Dr. Wily, Mega Man is attacked by the evil energy, incapacitating him and allowing Dr. Wily to escape once again.

While Mega Man is passed out, Duo extracts the evil energy, healing him, before parting ways. Mega Man is left in Proto Man’s care until he regains consciousness. Mega Man explains to Proto Man that he is thankful for Duo’s help.

Mega Man 8 likes to borrow several of the trends Mega Man 7 used. There is an intro stage, but this intro stage gives Mega Man a unique ability, the Mega Ball. This special weapon allows you to first drop a ball then kick it. However, it’s only useful for two bosses, the boss at the end of the intro stage, and the first Wily Tower boss. Even then, this ball is near impossible to control. Surprisingly, this intro stage can be selected at the stage select screen, a first for the series.

This is most likely because of how bolts are handled in the game. Instead of being standard currency, Mega Man 8 has 40 unique bolts hidden around its 10 non-Wily levels. Instead of buying extra lives or E-Tanks (the latter of which is absent in this entry), these bolts are used to purchase permanent upgrades. The upgrades consist of faster ladder climbing, having more lives after each game over, faster Mega Buster charging, and even different Mega Buster shots. The different shots can be selected on the menu screen, minimizing the risk for a regrettable buster choice.

The Rush support items have been changed as well. Instead of standard Rush Coil and Rush Jet, which appears as its own quirk in certain stages, there are four support items that are found by beating four different mid-bosses. One of these transforms Rush into a motorbike, one gives you a random helpful item, one has Rush fly ahead and rain health pickups and ammo onto the field, and the last one rains hell from above as Rush drops missiles onto the field. However, I can’t say that the bike is nearly as useful as Rush Jet or Rush Coil.

Mega Man 8 is also the first title in the series to feature saving. Instead of using a password system, the player can pick up where they left off without the use of passwords. It’s a minor change, but welcome for anyone sick of writing down hundreds of passwords over the years.

Lastly, but most infamously, Mega Man 8 features anime cutscenes. These scenes cover the game’s plot and feature the Blue Bomber’s dramatic encounters against Bass, Duo, and even Dr. Wily to a degree. These cutscenes were dubbed over in full in English, making this and Mega Man X4 the only games from the era to do so. However, there is one problem with this…

…the voice acting is horrendous. Mega Man sounds like a child, less like a man (though I can’t say that Ruby Spears’ version of Mega Man was any better), and it feels like each portion of the script was acted as they were reading it for the first time. Also, the story doesn’t make sense. Mega Man was always silly, but you’re going to have two beings fight in space, have them crash into earth, hype up this evil energy, and not have a big showdown with it in the end? This was the first time I was ever disappointed with a Wily final boss because for the first time, I expected more. Even after Wily is defeated, you’re treated with a cutscene of Mega Man being infected with this evil energy only for it to be… Solved…? Somehow? The whole scene feels like a waste of time and hypes up to a disappointing ending.

Mega Man moves much slower than he did in previous entries too. This could be because he is larger now than he was previously, but his movements feel clunky, and the slide is too slow as well, even if you can jump cancel out of it. This makes boss fights feel more cumbersome. To make matters worse, water levels have become more traditional as Mega Man can now swim. Swimming is basically jumping repeatedly instead of the usual high-jump in the water you’d expect.

Replacing Rush Coil and Rush Jet with the various Rush helping abilities was a poor choice too. Jet was replaced with these so that we could have an odd, side-scrolling shoot ’em up section. The bike, as cool as it may seem, is hardly ever useful, and the bombs and health items often get stuck at the top of the stage if there is a ceiling. This means that they will rarely ever be useful during a boss fight. But then again, who used Rush Coil during a fight in the first place?

One thing I did admire was the new bolt system. Searching for these bolts felt like searching for the MEGAMANV letters from Mega Man 5, but with more options on how to spend them. There are some choices of upgrades that are better than others, but experimenting with them is half of the fun of finding them.

Sword Man is one of the latter half of the Robot Masters, and his stage takes full advantage of that. In the first half of his stage are four rooms with four different weapon signs next to each portal. Each of these rooms takes advantage of one of the four weapons you get from the first four robot masters. Since you have to beat these robot masters to even access this level, this was an innovative idea that Mega Man 7 could have taken advantage of.

Several of these rooms use the weapons in unique ways, too. For example, the flash bomb is used to illuminate the room and reveal hazards as well as a tile on the back to be used as the puzzle at the end of the room.

As for the fight, Sword Man has the design of what you’d an expect, an honorable swordsman. As he lunges towards you, the top half of his body will split from the bottom, giving you room to jump in-between. It’s possible to stun him briefly with a Water Balloon, but this doesn’t render him completely helpless. Sword Man stands like a stone above the other robot masters.

It’s possible to do a “vehicle segment” well. You can make an auto-running level fun if it doesn’t feel like you’re wasting your time and that it’s fun to rush through. Mega Man 8, however, does not do this well at all and Frost Man’s stage suffers because of it. Near the beginning of the stage, you will encounter a jet powered snowboard on a slope. On this board, you can jump, slide, and shoot. However, enemies will be the least of your concerns.

During your journey down the slope, two kinds of prompts will appear to tell you to either jump or slide. The problem is, the timing on these prompts is inconsistent, and will sometimes make you jump earlier than you should, leading to an early demise, forcing you to start from the beginning of the section.

If this were a well-made vehicle segment, it wouldn’t need to tell you to jump or slide. The visual keys from the level would be enough, be it in the form of a line of health to jump through, or any other means to show you the way to go. Simply telling the player to jump or slide is a lazy fix to poor design. The worst part about the snowboard is that it returns in the first Wily Tower level, somehow even worse than it is here.

It’s a shame that the first half of the level is so terrible, because the rest isn’t as bad. Even Frost Man himself isn’t a terrible fight. He’s incredibly easy if you use Flash Grenade. Sometimes, these grenades will make him cover his face and exclaim, “that hurt.” Frost Man isn’t a terrible boss, he’s just a pushover.

Mega Man 8 could have been great. It was an experiment to bring the franchise to a Sony platform and took advantage of the hardware by providing animated cutscenes. While cutscenes like this appeared in Mega Man X3, this was the first time they were integrated into the story. It’s a shame that the voice acting is so terrible, because the scenes themselves are well animated.

Sadly, this is the last time we’ll see the Blue Bomber in his original series for over a decade. After Mega Man 8, Mega Man X4 was released, and the X series took over as the dominating franchise once again. The original Mega Man will have to skip an entire system before Mega Man 9 is released, but that’s only to take a backwards… in a good way.