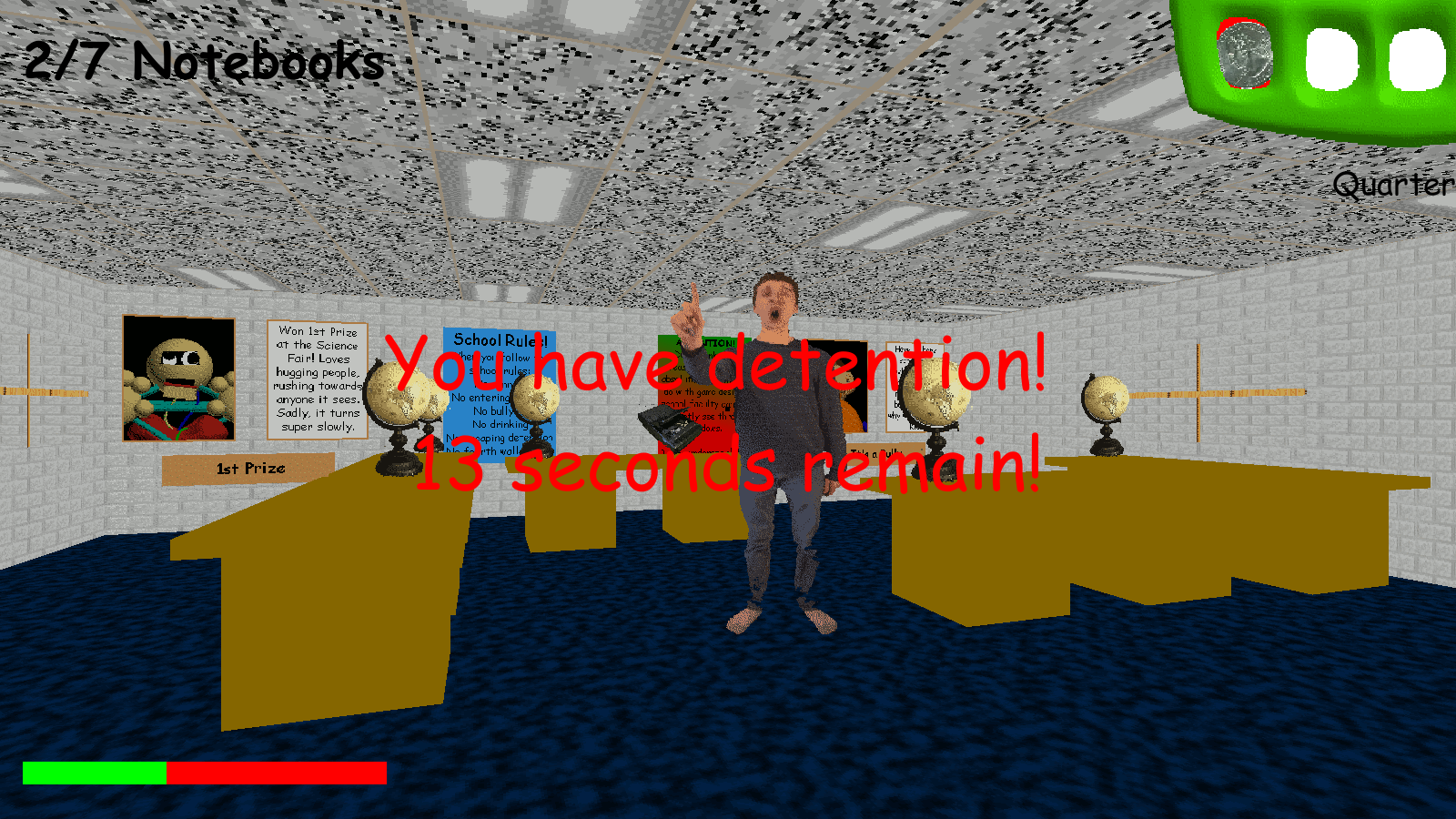 Ever since its debut earlier this year, Baldi’s Basics in Education and Learning has been a massively popular hit among the Let’s Play and YouTube communities. From its humble origins as a game jam entry to its Kickstarter that has surpassed more than half of its planned $50,000 goal with nearly three weeks left, Basically Games founder and creator Micah McGonigal is hard at work with game development and work. We had the chance to talk with McGonigal regarding the creation of Baldi’s Basics, as well as future plans and some more random tidbits of information.

So Baldi’s Basics in Education and Learning started as a Meta Game Jam submission. What was the inspiration for this project while you were making it?

Well, the initial inspiration was the terrifying edutainment game Sonic’s Schoolhouse. The idea for the game is one that’s been brewing in my head for a long time, so I had a pretty good idea of what to make in the game for the game jam. Other inspirations include raycasted games like I. M. Meen, and of course tons of edutainment games that I grew up playing!

Speaking of inspirations, what are some of your favorite games to play?

Game Jams usually have time restrictions for entries. What were some things you were thinking of adding in the game but couldn’t due to time issues?

Mostly things that I ended up adding in the 1.3 update to the game, like 1st Prize and endless mode. For the most part though, I was really happy with what I managed to make in the two-week period!

The game employs an odd 90s edutainment aesthetic that is endearing yet disconcerting, especially after completing the second notebook. What mood were you aiming for with this game?

I was aiming for an “off” mood. I didn’t necessarily want the game to be scary as much as I wanted it to be creepy, and I wanted that creepiness to be subtle. I felt having a mostly “normal” environment where nothing quite looks right, mixed with the sudden shift in mood (Music stopping, Baldi starting to chase you), would be a pretty good way of doing that.

The characters are rather eccentric and creepy as well; which out of the cast is your favorite?

Hmm, that’s a tough question! I think Baldi would have to be my favorite, since that’s a character I made up years ago, but I think besides that I would have to go with Gotta Sweep. Once I got that character up and running and heard its voice flipping out for the first time, I lost it! Similarly, I remember the first time I was showing one of my friends the game, Gotta Sweep did some hilarious stuff and I was laughing my head off! The sort of crazy randomness Gotta Sweep adds is something I really enjoy, and seeing people react to it has always been tons of fun too!

We’ve seen the rise of indie horror games from things like Five Nights at Freddy’s, Hello Neighbor, and Bendy and the Ink Machine. Why do you think these games so appealing for the YouTube and gaming community?

To be honest, I’m not entirely sure. I suppose a lot of it has to do with how those game often get some fun reactions out of let’s players.

There have been tons of different Let’s Plays of the game, but are there any videos that stand out to you?
JayskiBean’s and PhuCat’s videos stand out to me, as I’m pretty sure they were the first couple of people to beat the game, which was awesome to see because I haven’t actually beat the game yet! :P YuB’s first video of the game also probably has my favorite intro of any Baldi’s Basics video; He reads the game’s Itch.io description *exactly* how I imagined it would be, and I think it’s hilarious! The LivingTombstone has also done a really great song about the game which actually manages to make General MIDI sound good!

For a small gaming project, there’s a lot of lore within the game itself. Are there any secrets that fans have yet to discover, and will there be more little Easter eggs in future updates?

Yes! With Baldi’s Basics, I don’t really intend for most things to be taken *too* seriously, but there are some things to be discovered, and I love Easter eggs so you can expect plenty of those in the full game if that gets funded!

Could you tell us a little more about Baldi as a teacher? He seems like a… well-adjusted individual, to say the least.

I honestly have no idea why I made Baldi the teacher. :P In the comics I originally drew him in, my idea was for him to be an inventor whose inventions always failed, and a guy who really loves eating… Despite the fact he’s super thin. As a teacher… I honestly don’t know.   If anything’s for sure, it’s that he’s a pretty bad teacher! He tells you whether you got a problem right or not, but never actually teaches you how to get the problem right!

On the other hand, his ears must be enhanced since he CAN HEAR MATH THAT BAD.

You’ve chosen Kickstarter as your main funding source for the full launch of Baldi’s Basics. How did you come to the decision to use crowdfunding for this game?

I decided to use crowdfunding because I really want to make one great Baldi’s Basics game. I don’t want to wear the IP thin by making a ton of small sequels or something like that. With Kickstarter, if it’s funded, I’ll be able to get the resources I need to make the game as I’ve wanted to make it. At the same time, it also allows me to get the community involved and gauge interest in the game, which is great. The support people have shown so far is incredible, and super encouraging!

At the time of writing, you’re still in school (though summer break is currently underway). How do you balance game development and personal projects during this time?
During the school year, I usually spend a lot of time doing schoolwork and working at my part-time job. A lot of the in-between time I often spend on the internet, with friends, playing video games, and of course, working on my personal projects. When it came to Baldi’s Basics, since I knew exactly what period of time I would have to make it, I freed up my schedule a bit; I did a little bit of schoolwork ahead of time, took some time off at work, and during the development period I stayed up late pretty often! I was also blessed in that I didn’t have a ton of schoolwork those two weeks and that classes got cancelled a couple of times due to weather!

Have you ever gotten noticed from friends or family after the rise of Baldi’s Basics?
My friends and family have been very supportive of me, which is something I’m super thankful for! I had already told most of my friends and family about the game before I launched it, but there were a few people I know who came to me and were like “Wait, you made that?!” which was pretty surreal, haha!

Any last words to our readers about the game, advice about game development, or where we can get updates to future projects?

I had a ton of fun making Baldi’s Basics, and I’m glad that so many people are having fun playing it! I want to do a lot more with the idea, so I really hope the Kickstarter is successful. Even if it’s not though, I’ll still be super thankful for this experience, as it is teaching me a lot about game dev, something I really hope I can do full time!

If I have any advice, it would be that if you want to make games, start doing that as soon as you can! Even if you’re making small games in something like WarioWare D.I.Y., the more you do it the better you’ll get. In my humble opinion, self-teaching is an excellent way to learn how to program, so keep pushing yourself and trying new things. Not only is that a good way to learn, but it’s tons of fun too.

You can follow me @mystman12 on Twitter, which is where I’m most active and post frequent updates. If you want to ask me a question, DM me there! I also have a website, www.basicallygames.com, which you can check to see what’s new.

You can check out the Kickstarter for the full version of Baldi’s Basics in Education and Learning, which ends on August 23. Stay tuned for more news and interviews here on Gaming Trend.