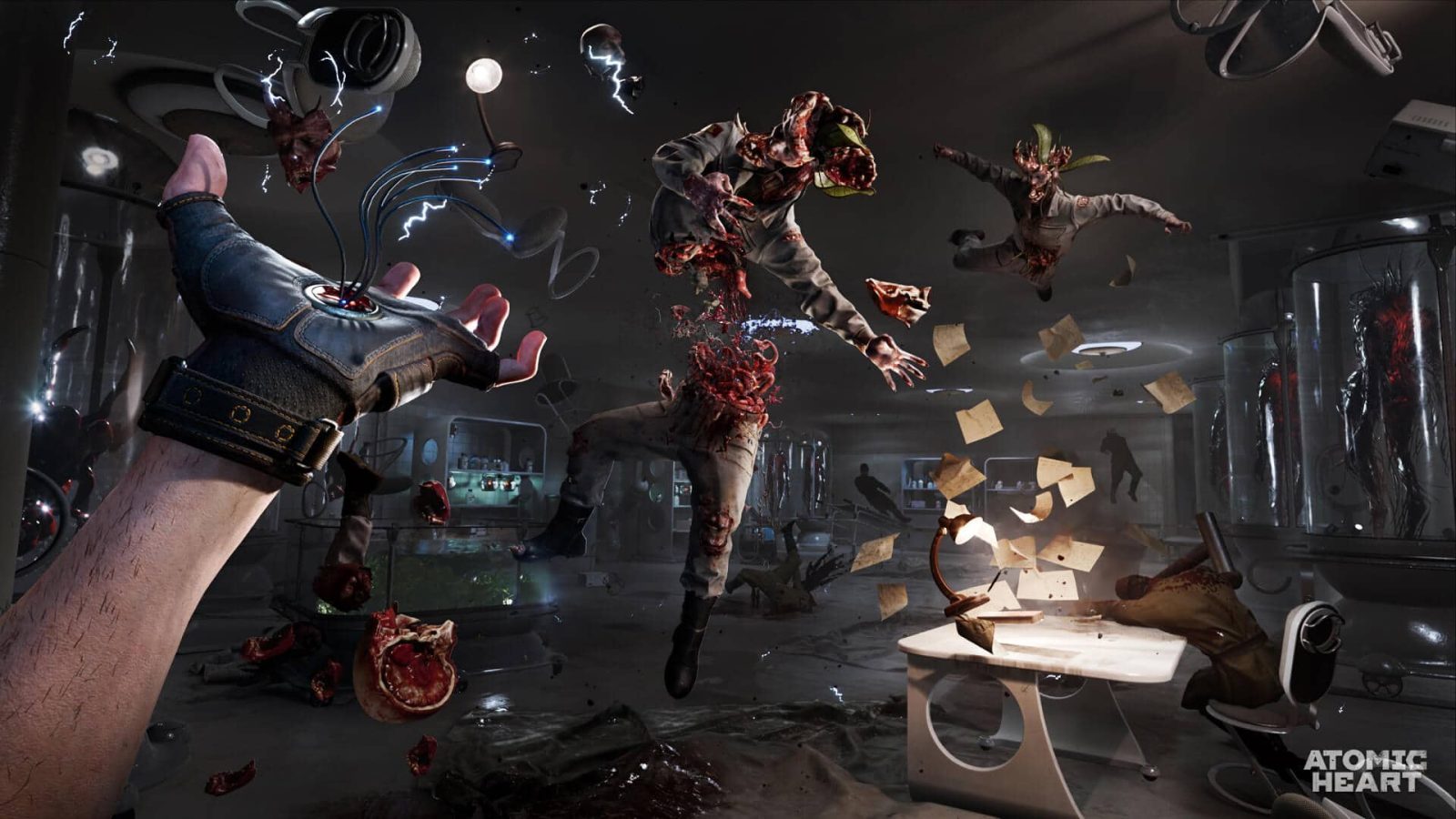 If you’re anything like me, you can’t wait to jump into the world of Atomic Heart. This narrative driven FPS has everything I want, especially the creepy looking setting that drips of psychological thriller. We reached out to the game’s director, Robert Bagratuni, to learn more about what is sure to make Atomic Heart a very special game. Check out what he has to say below!

Gaming Trend: We’re only a month away from Atomic Heart’s release, how is the team feeling?

Robert Bagratuni: The team is super excited to finally share their extraordinary efforts with players in February! We can’t wait to see fans and players all over the world enjoy the game, watch their discussions, reactions, and hear their feedback afterwards.

GT: First there was COVID, and now the war. What steps has the team been able to take to avoid as many obstacles as possible?

RB: Luckily, we have always supported a distributed team. During the pandemic, it’s restrictions and lockdowns, we were able to set up a very effective remote and distributed production team, thereafter the relocation of the team and employees from one location to another minimally affected the processes and operations. It required vigilant preparation and organisation, but are set up for the future and take every effort to ensure the safety and wellbeing of every team member.

GT: I know the original release was intended to be late 2022 (######BER haha), has the additional time allowed the team to accomplish their goals and polish the final product?

RB: The latest delay gave the team an opportunity to fine tune the final gaming experience even more! Everybody is now busy polishing and testing the game for players to receive the best possible experience next month! No doubt, the last push is very exhilarating, but our goal is to give players the smoothest experience right at launch and on each available platform.

GT: The setting is one of my favorite parts of Atomic Heart, what inspired it?

RB: We were inspired by Soviet modernism in architecture; these monumental buildings emphasize the spirit of utopia more than any other style. We followed this style everywhere, both indoors and outdoors. We mixed the styles extensively, creating this recognisable eclectic mix where old and new combine in unexpected ways. There was something similar in “Half-Life” where you could see the Soviet buildings and Alliance technologies stitched into the buildings.

We put a lot of effort into making different environments, each new location is really unique and has its own spirit, story, and idea. Immersion and emotion are very important in the campaign, so we tried to put something special into every place you meet. 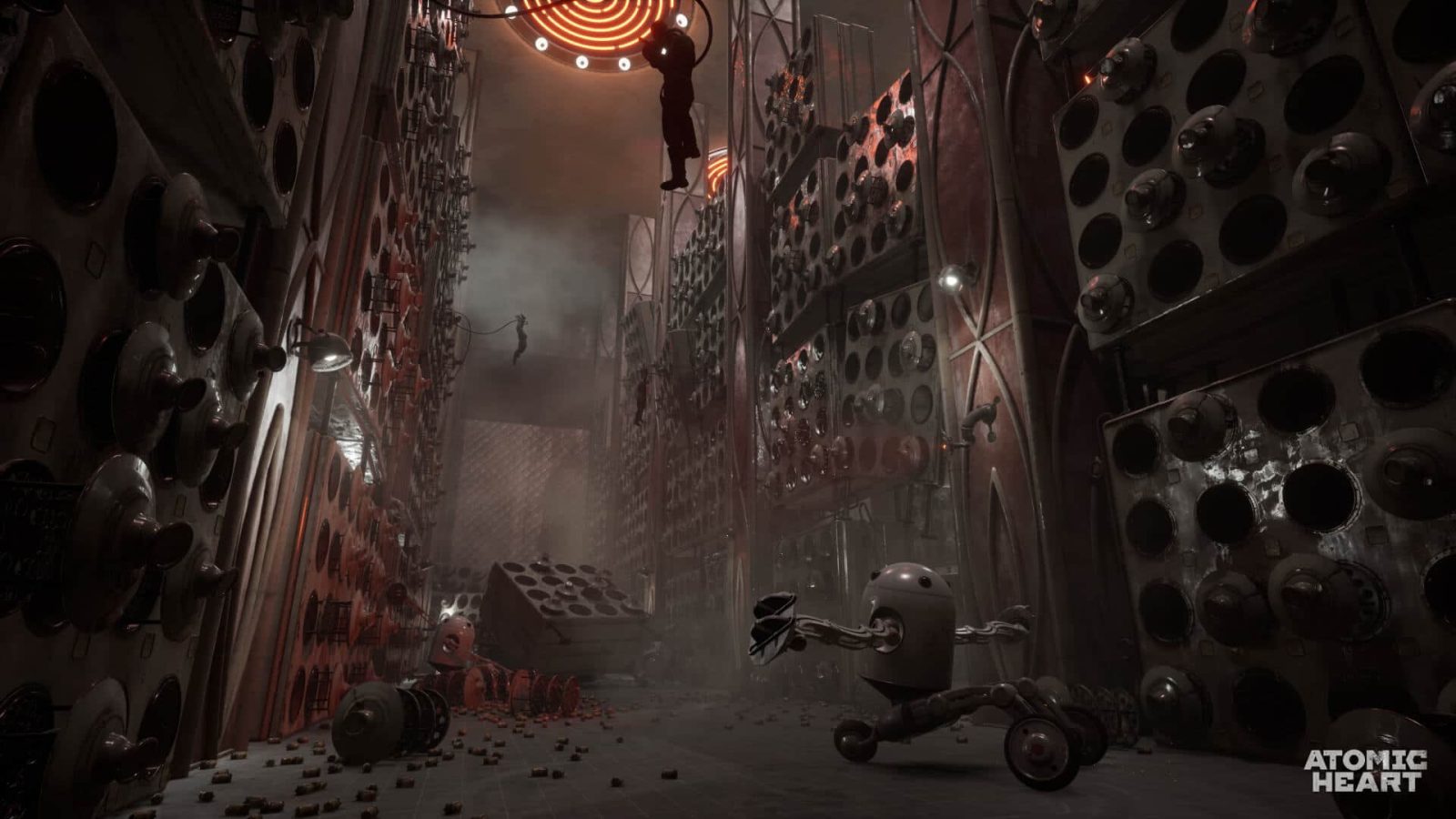 GT: I’m a huge fan of Bioshock, and the narrative FPS stylings (having powers is super awesome) remind me a lot of it. How does the balance work between using those and weapons? And how many powers are planned to be available?

RB: In order to deliver the best gaming experience, each game should have a nuanced adjusted balance. That’s what we were striving to achieve in “Atomic Heart”! We thoroughly designed each weapon and power to behave uniquely and exactly the way to complement different types of them.

For example, fighting with melee weapons helps you not to waste ammo, because its amount is limited, while the opponents very rarely let you breathe. For this we created a special energy mechanic, which allows you to accumulate it, while fighting in close combat with melee. And this energy, for a short period of time, will allow you to destroy enemies with impactful energy weapons. So, you will have to switch between those styles of combat every time.

And of course, you will be able to mix melee and firearms combat with the special elemental powers, which are granted you by your polymeric glove CHAR-les. You will be able to strike enemies with a powerful lightning attack. Or you could cover the enemies with a polymer that is very reactive with lightning, freeze rays and fire. You will also be able lift the enemies into the air and smash them to the ground with the telekinesis power. And, of course, in order to defend yourself, you will be able to cover yourself with a defending sphere that will allow you to avoid receiving damage.

I also like using freezing ammo for close-quarters combat and fire ammo for long-range combat. During the fight I find it cool to combine it with a polymer bomb and telekinesis – this way I have an all-purpose set to dynamically use in combat depending on the difficulty and specificity of a curtain encounter and its surroundings. 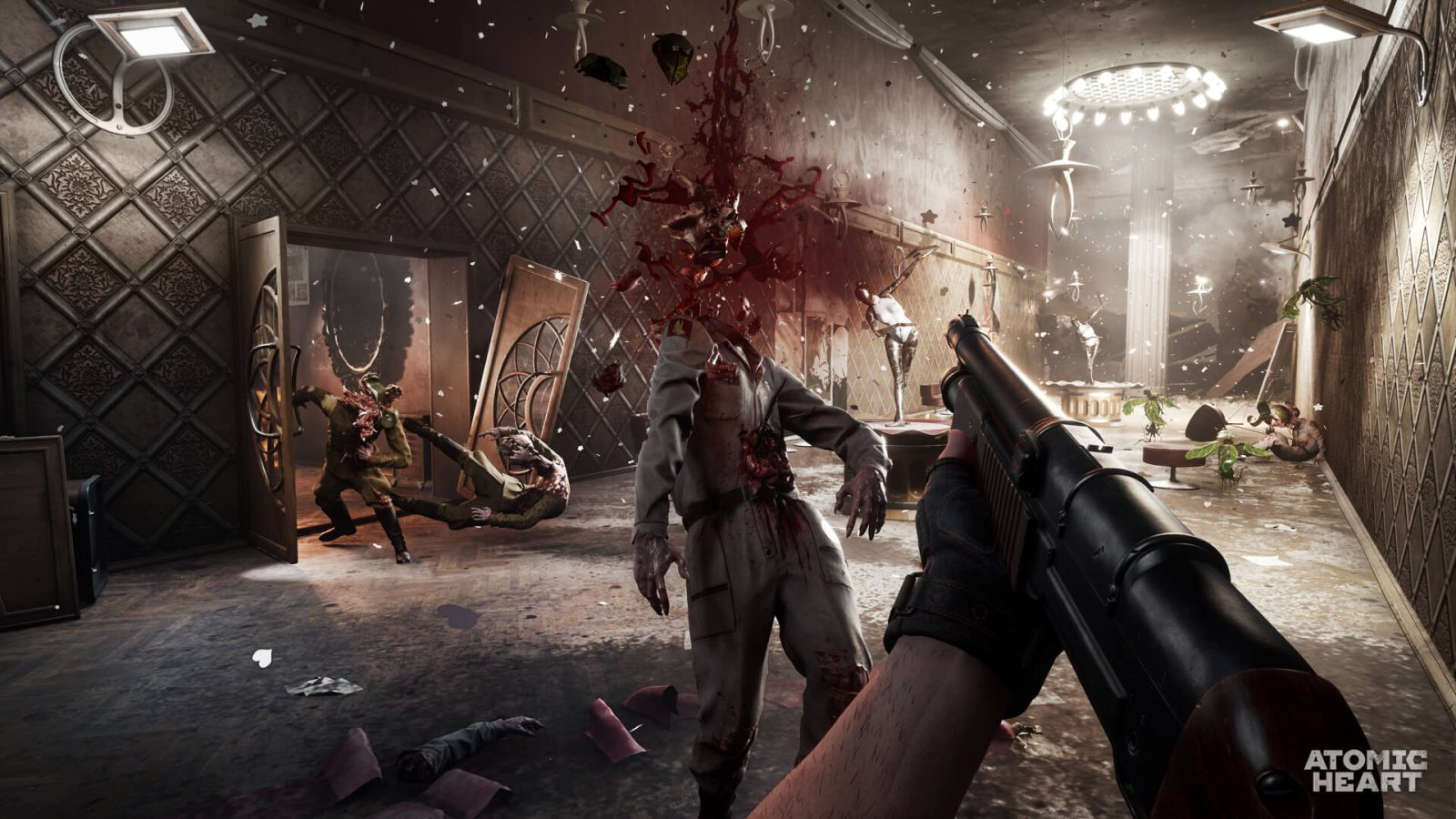 GT: How has the partnership with NVIDIA (like with DLSS 3) allowed the game’s ambition to climb?

RB: We feel that DLSS 3 technology is the future must-use technology for every developer. Thanks to the partnership with “NVIDIA” and hard work of its team, we were amazed how this technology allowed us to significantly boost the framerate of our game, improve overall game quality, adding more details and higher resolution. And all of this is accompanied by a fewer number of artifacts that could be observed.

GT: About how long is the story, and are there side objectives?

RB: The world of “Atomic Heart” is pretty huge, so, in order to complete the main story campaign you will need to spend approximately 25 hours playing the game. We constructed the game not to purposely distract the player’s attention from the story, but if you decide to go deeper and immerse yourself more into the game’s world, there would be at your disposal lots of interesting objects and hidden laboratories to explore. And you can do it anytime while progressing the story after its completion. Those places are spread across the whole Facility 3826, and in addition to the significant rewards, a number of additional stories are waiting there to be discovered to tell you more about the game’s complex world.

GT: The twin robots are incredibly designed and definitely creepy. How do they factor into the game’s narrative given how much they’re featured?

RB: Thank you! These Twin robots are definitely one of the biggest game highlights! We worked with professional ballerinas to capture their motions, and they’ve done an amazing performing job. Indeed, the Twins look frightening, but I think you would agree that at the same time they look stunningly beautiful.

And speaking of their story involvement – again, I don’t want to spoil too much, however the Twins, Left and Right, are assistants of a genius scientist Dmitry Sechenov, creator of the neural network “Kollective”. The Twins fiercely guard and play a surprisingly big role in the story. I can’t wait for our fans and players all over the world to be able to discover next month our rich and complex story and learn more about the Twins and their secrets!

We appreciate Robert and the team at Mundfish for allowing us to quiz him on the game! Atomic Heart will release on February 21nd, on PlayStation and Xbox platforms, and on PC. It will also be available Day One on Game Pass.