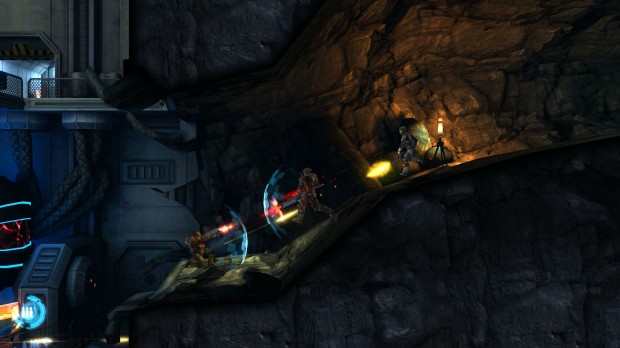 We sat down with Leonid Rastorguev, Project Manager and CEO of Kraken Games for an in-depth look at their upcoming game Warside.  The free-to-play shooter caught my eye as it reminded me of a game that I have personally spent entirely too many quarters playing as a kid.  I had to find out more.

GT: Every good game has a great story. What’s the back story for WarSide?

LR: Well our story is quite typical I guess for an indie studio. We started as a group of three students trying to make their own game, working on weekends and after university classes. Later on we presented an early prototype of the Russian version at GDC in 2008 and got some positive feedback from the industry. It encouraged us to continue our work on Warside and we started to look for like-minded people. It wasn’t until late 2011 when we could start a full-scale development of Warside.

Since 2008 when we created the first concept of the game, the studio has evolved into a group of 15 young professionals full of enthusiasm and a love for what they do.

GT: How would you describe the gameplay for Warside?

LR: Warside is a mix of platformer, shooter and RPG. Battles take place in two dimensions – you can run left and right and use special character abilities to move vertically.

I like Warside mostly because of its pace. It is a fast-paced game with lots of things going on at the same time. But as Warside is a 2.5D shooter you are fully aware of your surroundings and can make fast tactical decisions relying on all the information you receive with just a single glance at the screen.
Another important thing about Warside is team play. Personally I always like games where you can overcome all challenges side-by-side with your friends. In Warside there are plenty of opportunities to support your teammates. A well-coordinated team usually prevails.

GT: So what was your inspiration for Warside? I’m very much reminded of the old arcade game Forgotten Worlds for some reason (https://www.youtube.com/watch?v=Uc0JYLO6m78 for reference)

LR: I can’t say that there was a particular game that inspired us when we were creating Warside. Honestly, our goal was to create a game with straightforward gameplay and then add the depth of an RPG to it. But of course we looked at other games in similar genres. We like the detail and story in ‘Shadow Complex’ and ‘Deadlight’. Those are the games we were looking at while improving our graphics. We like the pace of ‘Soldat’ and ‘Showdown Effect’ and we took some ideas from them to polish the core gameplay. And for our PvE cooperative modes we checked ‘Contra’, ‘Super Metroid’ and ‘Shoot Many Robots’.

GT: Talk to me about character progression – how does one go from rookie to the current level cap of 20?

LR: In our game your character earns experience after each round of combat regardless if you won or lost. The experience for the particular character is calculated based on their performance in battle. Almost every aspect of the gameplay counts: kills, damage dealt, damage taken, heals made, mission objectives completed and many more.

By gaining levels, the player gets access to more advanced game mechanics such as different active skills and passive perks. Players can customize their character by investing skill points in different talent lines and by acquiring more specialized equipment.

GT: What classes are available in the game? How are they different from one another? (i.e. crowd control, dps, etc?)

LR: For now we have 5 classes and they almost perfectly fall under traditional RPG roles. Defender is a tank class, Medic is a healer, Infiltrator is specialized in Damage over time and Control skills, Destroyer is an area damage dealer and Assault is a common pure damage class.

GT: You have a full inventory and skill progression system similar to a game like Diablo. How does item progression work?

LR: Inventory, items and skills work in Warside in a way very similar to what players are used to from other RPGs. We see no need of being innovative in this aspect of the game. Items occupy slots in your inventory, they fall under 5 standard rarities (from white-common to gold-legendary), rarity and level of the item defines its power. Rare items usually offer more variety to suit different builds and play styles.

Skills are unlocked by skill points earned for leveling or by equipping special gadgets. Gadgets offer a variety of skills from poison-darts and hand-grenades to medical stations and stunning traps.

GT: Tell us a little bit about the different battle modes available at launch.

LR: At the moment we have 4 PvP battle-modes. Team Deathmatch is as simple as it sounds, two teams fight in an arena, the first team to reach a certain amount of kills wins.

Point Capture is also a traditional one: several Control Points are scattered throughout the arena. By capturing and controlling them the team gains a point. The first team to reach a certain amount of points wins.

The third mode is Resource Gathering. In this mode boxes with resources spawn randomly in different parts of the map. Bringing resources back to your base earns points for your team. Bigger resource boxes also spawn on the map from time to time and they bring more points but need teamwork to be brought back to base.

And finally we have Artifact battle mode. In this mode a single Artifact spawns on the map, any player can pick it up. Holding an Artifact earns points to your team.

We continue to work on new battle-modes and to improve existing ones. Our goal here is to bring more interaction with the environment and to encourage a tactical approach to mission goals.

GT: Talk to us about the cooperative play missions. What can players expect in this mode?

LR: For cooperative play we currently have Dungeon mode. It is a linear set of different rooms/encounters with everything you could expect from a platformer: waves of enemies, auto-turrets, flying drones, traps that require attention or jumping skills to pass, gas-filled rooms, well-hidden snipers, kamikaze-drones, multi-phased bosses and much more.

We also have another cooperative mode in development – Survival. In Survival mode your team tries to hold an objective against waves of attacking enemies. Each wave is stronger than the previous one but your reward increases with every wave survived.

GT: Warside is free to play. What sort of items should I expect in the cash shop?

LR: We consider a free to play model as a perfect opportunity for players to try the game before buying it. If they like the game we encourage them to pay a fixed price for the game as if he bought the retail game. If he decides to spend more time in the game achieving some major goals, then he can invest more money to reach those goals faster.

Therefore our free account is not limited in leveling or available equipment. And the cash shop does not have any items that could affect the power of the character in terms of giving an unfair advantage. There you can buy armor customizations, convenience items (additional inventory and market slots etc) and time-saving boosts. Additionally we offer several single-purchase packs that offer lifetime bonuses and a choice of items from the cash-shop (the cheapest will cost $10).

GT: How can players get involved? When can we expect an English Open Beta?

We are currently looking for players support on Steam Greenlight – http://steamcommunity.com/sharedfiles/filedetails/?id=242674873. As soon as we get the game approved on Steam we will start to work on full localization and integration and hope to launch Warside in Steam Early Access within two months after approval.

If you want to try the game now you can check our English manual here: https://warside.ru/en/node/397. There we translated and explained the core features of the game so that you could try it right now!

GT: Thanks so much for the interview!