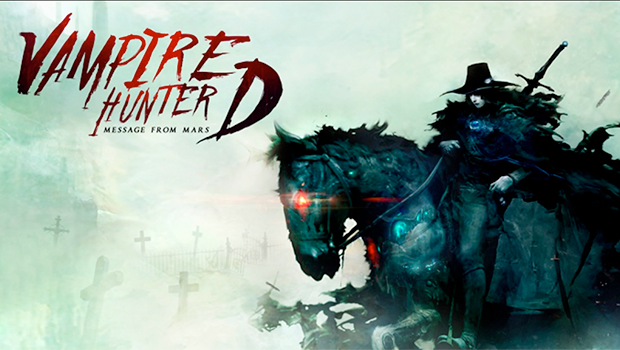 Last week I had the opportunity to chat with key creators for Vampire Hunter D: Message from Mars. Calling in from across the globe was the Japanese Digital Frontier team, along with Scott McLean, the creative executive for the US based Unified Pictures. Character supervisor Yoichi Mouri, technical director Keitaro Hamabe, creative executives Mitsumoto Suzuki, Suguru Matsumura, and Yasuhiro Ebinuma all took the time to answer questions about the upcoming comic.

Vampire Hunter D has a robust history, spanning twenty-nine printed novels, two animated movies, and a manga series. However, it has been a while since we’ve seen D in an animated form. Vampire Hunter D: Bloodlust was released in 2000, and while many fans have been long awaiting the upcoming Vampire Hunter D animated series, few could have anticipated the release of a Western style comic.

The Kickstarter to fund Vampire Hunter D: Message from Mars was met with overwhelming enthusiasm. Stranger Comics and Unified Pictures set out to raise $25,000 to make the comic a reality; the campaign brought in over $100,000. “We were actually very surprised at the enthusiastic reaction from fans,” creative executive Mitsumoto Suzuki explained with a look of excitement. “We thought we would hit the initial target, but we did not expect four times as much.” Fans backed the project to receive digital and signed copies of the comic, as well as items such as a replica of D’s necklace, and even a 3D printed model of D’s symbiotic partner and constant companion, Left Hand.

Suzuki speculated about the success of Vampire Hunter D, and why it has held such an appeal for so many years. “Readers can understand the hybrid universe of D, in that there’s the very attractive character of D, and it’s sci-fi, and it’s gothic horror, and we can see monsters. We even have robots, and romance!” Suzuki went on to explain, “ It’s more than a hybrid, it’s a mixture of all these diverse things that can be presented to the American reader. We are very excited to see what kind of reaction we see from comic book readers.”

Watercolor concept art for Message from Mars by Geoff Pascual

As a fan of both Vampire Hunter D and comic books, I couldn’t help but ask what the success of the comic meant for the future of D. Would this enthusiasm bring about more Vampire Hunter D comic books? “We think it’s a good idea to keep on publishing comic books,” Suzuki answered, “but as a CGI animation production company, simultaneously we’d love to put a D TV series together.” Of course, finding the right story to make into a comic can be challenge in itself.

The story that Message from Mars was based upon has an amazing history of its own. Adapted from a short story which Hideyuki Kikuchi distributed to only a small number of fans at an event, it has never before been published, and it is estimated that fewer than twenty people have read the English version. Writer Brandon Easton was hired to adapt the original story, Message from Cecile, into a comic format. “One thing which is interesting to me,” Suzuki commented, “is that originally, Message from Mars was a slightly slower story, but Brandon added a lot of action in the story to appeal to comic book fans. I think it’s successful.”

Message from Mars features younger D, early on in his vampire hunting career

Message from Mars takes place in two separate time periods on the planet of Mars. It will give fans of the series a better understanding of how the world of Vampire Hunter D, as we know it, came to be. We are able to see D’s world before it was ravaged by nuclear war, and to get a glimpse what appears to be a younger D, still early on in his vampire hunting career.

Finding the right look for a comic book D was clearly a challenge. The team tried to remain true to the spirit of the original concepts by Yoshitaka Amano, while adapting D’s look to better appeal to Western fans. “Initially, the American side designed the comic book version of the character, and then the Japanese side adjusted it,” art director Yoichi Mouri said. “We have a lot of respect for Amano’s original style concept, but for this particular project, we need to appeal to American comic book fans. So we were looking for something between the original Amano D style and the American, or Western style.”

While a far cry from Liefeldian, D is noticeably broader and more masculine than what D fans are used to. “The standard with Mr Amano’s version, his D is more skewed to female, so that’s the standard image for D,” Mouri explained. “So for Japanese readers, probably the comic book D looks like more male and more wide.” Not everyone reacts well to a change or a reimagining of a favorite character, so I asked Suzuki how the team anticipated Japanese fans to react to this version of D. “Actually, we showed some of the artwork at Mr Kikuchi’s fan meetings, and they liked the comic and the characters.”

While the overall style and look of the comic was important, it was critical to correctly capture D’s face. “We were looking for somebody like a young David Bowie, or maybe more skewed to [a young] Alain Delon, the French actor,” Mouri explained. Digital Frontier collected images of Bowie and Delon for artists to reference and draw inspiration from, and Mouri even created a digital composite of D’s face by combining the features of both men.

Of course, one cannot talk about adapting the style of D without discussing the New York Comic-Con variant cover by Anges Garbowska. With Kikuchi reviewing all the art created for Message from Mars, I had to ask about his reaction to this hilariously different departure from the traditional depiction of D. “Actually, Mr Kikuchi likes Agnes’ version very much,” Suzuki explained, laughter coloring his every word. “He shared that artwork with a meeting of fans and he actually had some fun with his fans. Kikuchi said to them, ‘You know what, this is what D is in America, and we are going to produce a TV series based on this character.’ The fans are like ‘...Nooooooo!‘ So he enjoyed it as a variation, and he likes it very much.”

While D and Hand are constants in the series, almost every D story has its own, unique heroine, and Message from Mars is no exception. I asked about Cecile, the heroine of this new story. Should we expect a damsel in distress, or more of an action hero, like Leila from Vampire Hunter D: Bloodlust? According to Scott, she’s somewhere in the middle. “She takes action, but not because this is her calling, because she realizes that if she doesn’t do it, no one else will.” Mouri went on to explain, “She fights against vampires, she tried to trap vampires on Mars. She’s not really the superhero type, she just acts as she does because she feels it’s necessary.”

With the interview drawing to a close, I had one burning question left to ask: Who would they like to see voice act for D and Hand?

“So the voice for Left Hand, Hamabe-san’s choice is Anthony Hopkins or Morgan Freeman,” Suzuki answered, as Scott leaned in to enthusiastically whisper, “Lewis Black!” Suzuki continued, “For D, we have no idea!”

I was surprised to have him turn the question back on me. “We are curious, who is your recommendation for Left Hand?” After a few moments of consideration, my suggestion of Danny DeVito was met with a chorus of laughter.

While Benedict Cumberbatch was suggested as a voice actor for D, Suzuki did not sound entirely convinced. “I am not sure he could act as D. For D, actually we have started to argue! Hamabe-san’s humble suggestion is Vin Diesel.” This suggestion was met with another round of laughter. “Hey,” Scott said in Hamabe’s defense, “he could be good. How much range did he get out of ‘I am Groot’?”

Vampire Hunter D: Message from Mars #1 will be released on November 16th, though fans who backed the Kickstarter have already received their digital copies of the first book. “So far we’ve had one complaint about the comic–and it’s not really a complaint,” Scott McLean said. “Someone didn’t like the way the ‘e’ looked on the comic, when they zoomed the panel into 500 percent. We found out it was a problem with the PDF compression, and it’s been fixed now, in case anyone else wants to zoom in to 500 percent.” You can pick up a copy of Vampire Hunter D: Message from Mars copy at your local comic store, or by visiting the Stranger Comics website.