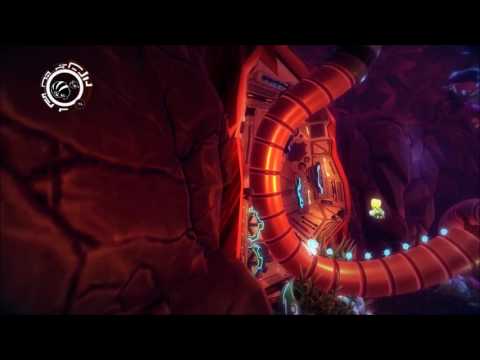 As George Bernard Shaw once said, “We don’t stop playing because we grow old; we grow old because we stop playing.” While I doubt Mr. Shaw was specifically referring to video games, I can honestly say that at the ripe old age of 31, I haven’t had this much fun with a platformer since Donkey Kong Country on Super NES.

There’s something wonderful about the innocence and joyful simplicity of a good platformer. They’re often casual, providing a fun experience that’s both easy to pick up and easy to walk away from. Conversely, they can also be hardcore, challenging you to find every secret, collect certain items or do speed runs. No matter what draws you into platformers, Mekazoo has something for everyone.

In Mekazoo, you control one of five different characters, known as Mekanimals. Each of the five Mekanimals are unique, both in play style and looks. The Armadillo is fast, rolling effortlessly around loops and curves and powering through enemies in a fashion reminiscent of Sonic the Hedgehog. The Frog lashes out with his tongue to vanquish insectoid foes or dangle and swing like an amphibian gymnast on the uneven bars. Mekazoo’s resident marsupial, the Wallaby, uses some serious hops to bounce over obstacles and squash baddies. The Panda is by far the slowest of the Mekanimals, but its strength can be used to break walls or floors, or cling to surfaces. Last but not least, the Pelican can, well, fly.

You begin the game with the Armadillo during a sequence that seems to be part introduction and part tutorial, but you’ll earn a second Mekanimal, the Frog, after defeating it as the first boss. The other characters are unlocked as you progress through the singleplayer in the same way. You’ll have to defeat them in a boss fight, after which they become a part of your team.

Mekazoo’s gameplay is just awesome; it’s heavily momentum based and wildly fun. Maintaining momentum is unbelievably satisfying and makes completion much easier, but in order to do so you’ll have to recognize when to switch characters. For instance, if you see steep ramps or loops up ahead, they are best tackled with the Armadillo. If you see a wide chasm dotted with hornets and other objects from which to swing, that’s the Frog’s wheelhouse. Quickly switching after a mistake can often save your life as well. Recognizing these situations is intuitive and rapidly becomes second nature, making Mekazoo pleasantly approachable. Since you’ll only ever control two Mekanimals at a time, it’s never overwhelming either.

Good Mood Creators also built in some local, two-player co-op. In this mode, two players must work together, switching out their two Mekanimals at the right time to overcome obstacles and avoid hazards.

I played through Mekazoo on PC, but I found the PC controls to be a little awkward. Plugging in an Xbox One controller sorted that out immediately, so I’d recommend it if you’ve got the option.

I absolutely loved the strange, 2.5D, neon, sci-fi jungle of Mekazoo. The Mekanisphere, as it’s called, is a wonderland of immersion, alive with vibrant colors, various types of aggressive insects, spiky vines, twisting pneumatic tubes, and giant saw blades. Separately, none of these things would seem to go together, and yet, Good Mood Creators has made them work astonishingly well. In general, the graphics looked good as well, but when the camera got up close, some lines and textures did get a little messy.

Many gamers will instantly recognize the themes and songs of decades old, famous platformers like Super Mario Brothers, Sonic the Hedgehog or Donkey Kong Country, and so forth. In this same way, Mekazoo’s soundtrack, created by M.J. Quigley, is both brilliant and, somehow, inexplicably nostalgic (you can listen to Quigley’s stuff on Soundcloud). The melodies fit the level design and speed of the game almost perfectly, with timely transitions based on which area of a level you’re working through. M.J. Quigley’s quasi-electronic tunes are infectiously exciting and catapult this already fantastic platformer even higher.

Good Mood Creators has lived up to its name. Mekazoo had me smiling from ear to ear and humming its catchy soundtrack for hours after putting it down.

Mekazoo is a gorgeous, brilliantly designed evolution of the platformer genre. It feels natural, playful, engrossing, and challenging all at once. Swapping Mekanimals on the fly adds to the game’s already successful formula by giving it more depth. With a magnificent soundtrack and an intuitive, natural flow, this gem shouldn't be missed.