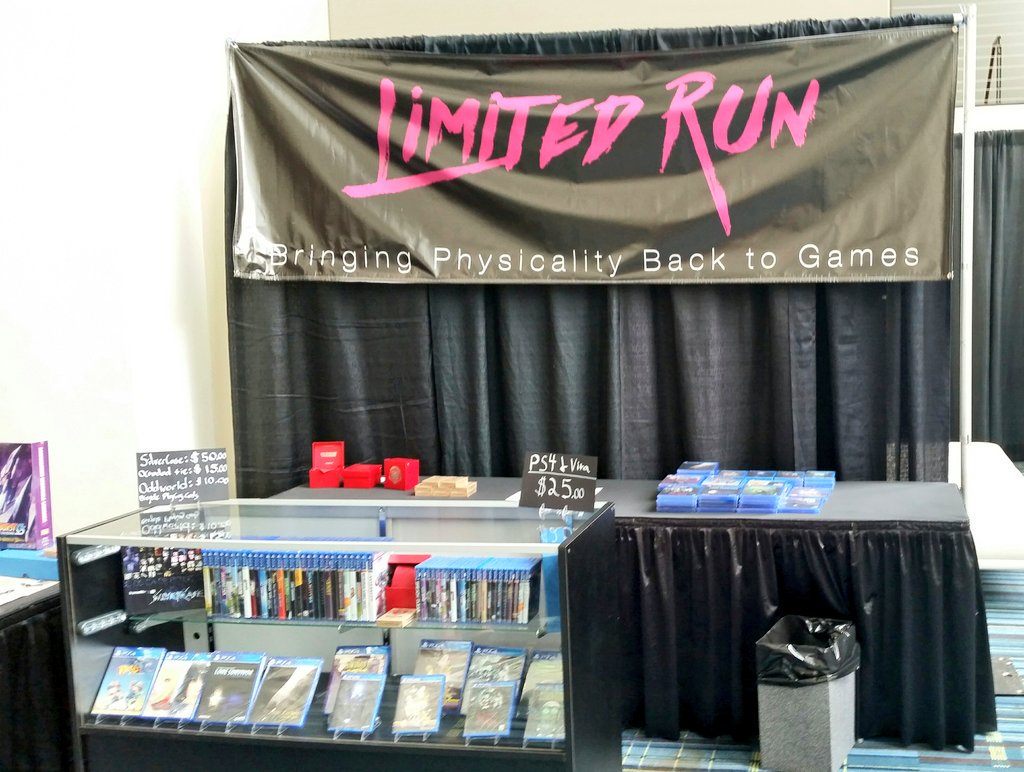 While it was announced last year that Limited Run Games would publish Nintendo Switch titles, the publisher just recently said that one of its first entries would be Mighty Rabbit Studios’ Saturday Morning RPG. We got to speak with Douglas Bogart, co-founder of Limited Run Games, about the company’s success, Switch publishing, and some other fun things.

So with 2017 in the books, we’ve seen many more Limited Run Games releases compared to last year, with some pretty big names attached to LRG (Night Trap and Ys Origin come to mind). How would you sum up your feelings toward the company in the past year?

We feel that the company has definitely grown! We’ve gone from 2 employees to 12! We are even moving into a bigger office in February. Much larger games are coming across our laps now too. We are definitely humbled by the whole experience, we never thought we’d get this far. We assumed our very first release back in 2015 wouldn’t sell out and that’d be it.

You’ve increased your convention presence in the past year, and met some pretty interesting people along the way. What was your favorite meetup or experience during a convention or expo?

I think right now my top experience was drinking with Suda51 in Seattle during PAX West. He is a big hero of mine and a huge inspiration for me. But as always, it’s super awesome meeting our fans! I will never get over how cool it is to be asked for a picture or autograph.

If you could describe one song that defines your life at this moment, what would it be?

What’s My Age Again by Blink 182 pretty much sums up my life. I get to do something youthful for a living and no matter how many responsibilities I take on I still don’t quite feel like a grownup.

I know that your dedication towards physical media stems from the volatility of digital storefronts. With events like the Wii Shop effectively closing this March, how important do you think physical game releases are nowadays?

I think they are even more important. Seeing the Wii Shop close is scary, how long before it’s PS3’s library on PSN?

The new ESRB policy combined with several titles vying for your attention means that you’re going to be more selective with releases going forward. Do you have an idea of the quantity or pace of releases you plan to schedule in the coming year?

Our goal for the Sony side is 2 PS4 & 2 Vita a month or some variation of that never exceeding 4. With Nintendo we plan to really keep the pace lighter with our goal starting out 1 release a month eventually getting to 2 a month, but never anymore than that. We wanted to keep it at 1, but so many great games came to us that we decided 2 would have to be the new limit.

Both of you [Doug Bogart and and co-founder Josh Fairhurst] are avid collectors; what is your most prized possession in your collection, and what is something you still want to purchase?

For Josh it’s definitely his Dreamcast collection, he only needs a handful of Japanese releases and it’s complete. For me it’s trickier a lot of my stuff had been stolen when I was a young adult, but I’m pretty happy with my PS4/Vita collection. I also have a problem collecting Dragon Ball figures and Kylo Ren figures.

Aside from some prominent titles, you’ve also released a few collector’s editions last year. How did you decide what to include in these deluxe releases?

We asked the fans what they’d like to see. Soundtracks seemed essential, posters are a lot of fun too. Artbooks are probably our most requested and something we plan to do more; the problem is a lot of devs don’t have a lot of art to use for one or the time to put one to together. We have some pretty cool things planned that haven’t been done yet.

The game actually ported really easily and didn’t need a lot of work to make it run. We’ve been testing it a lot to make sure the game runs smoothly. We have some pretty exciting things in the works to offer with the physical edition!

The Nintendo Switch has been a monumental success for indie titles (with games like Golf Story, Blossom Tales, and Super Meat Boy garnering acclaim). How do you view the Switch’s library so far?

I think it’s great so far, I fear that they will fall into the same pit Sony did where some questionable games make onto the shop though. But as of right now the Switch has an excellent library with games for everyone!

*Cue Back to the Future reference*

I know that publishing Switch games means balancing between three consoles. Will the inclusion of Switch titles affect PlayStation 4 or Vita releases?

Nope! We are going to pick a different day for Switch releases so it shouldn’t interfere.

I know you have to be tight-lipped on future Switch releases, but maybe you could give a hint to another title in the future? ;)

I know fans will be furious with joy when they see some of the games we have coming!

Finally, anything you’d like to say to our readers and other Limited Run Games fans, or to indie developers wanting to publish their games physically?

Thank you everyone for supporting us, 2017 was definitely a game changer and at the same time rough for us to adapt. 2018 is going to be great and we look forward to growing with you!

Limited Run Games’ next releases will be the PlayStation 4 versions of The Bit.Trip and Screencheat, of which the first batch will be available to purchase at 10 AM on Friday, January 19. Stay tuned for more news here on Gaming Trend.