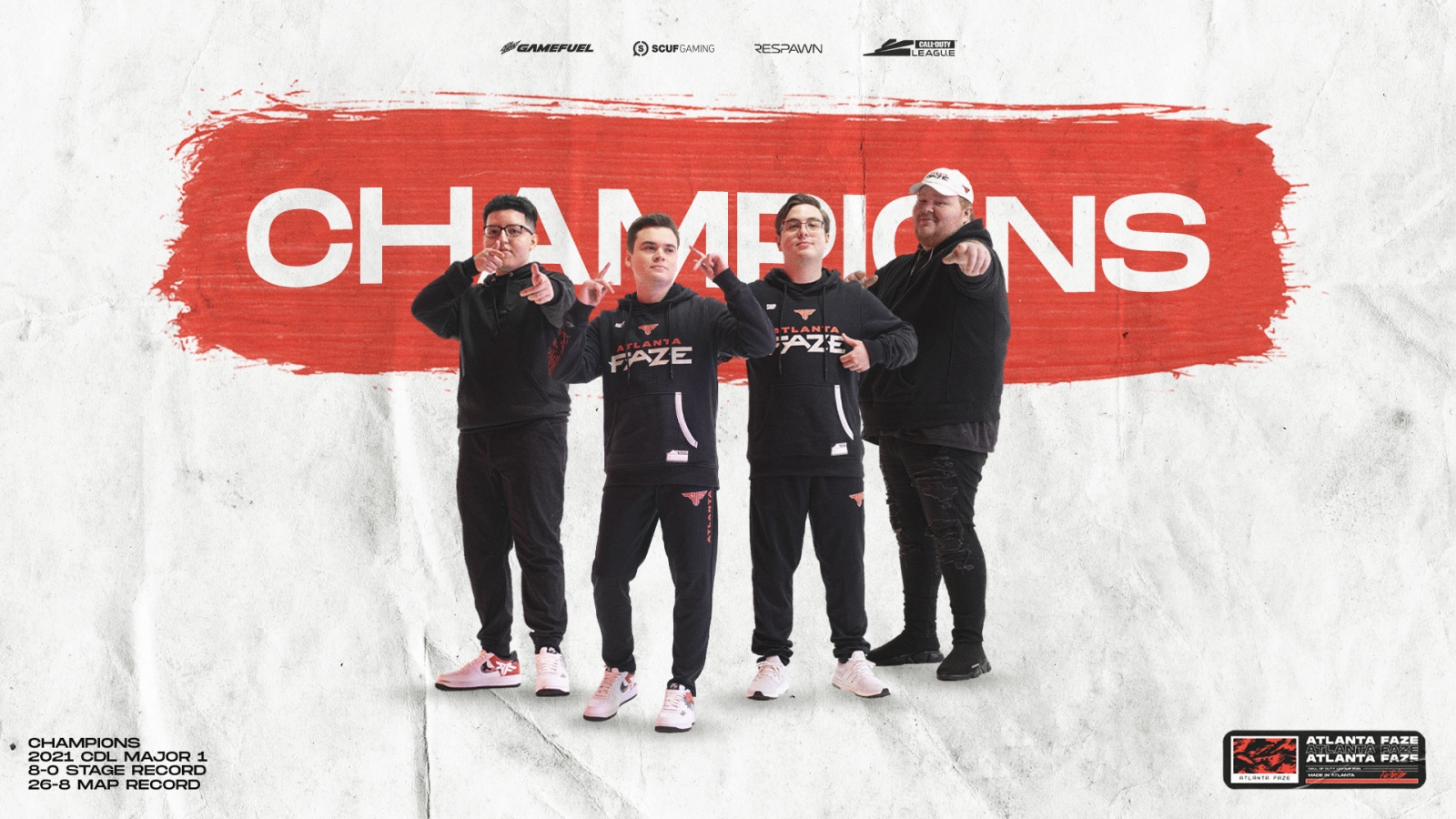 It’s been a bit more challenging than expected, but the first stage of the Call Of Duty League has come and gone. We honestly only had one regular week in week one, followed by the winter storm influenced Super Week which involved teams playing an obscene amount of games, and then the first major right afterwards. For Atlanta Faze, it may have been the easiest of all, who still have yet to lose a game and made the first tournament look easy with an 11-2 map count through the playoff. But now is the time for rest before the Toronto Home Series on March 18th, and even on their week off a couple of Faze members took a second to talk about the championship week.

First off, let’s just think about how dominant Faze were, especially in the Search and Destroy mode. They finished the tournament on a tear in that mode, with a 30-11 overall record and beat up on Dallas 18-6 in the grand final. One would have to ask, why are they superior in comparison to opponents, and are they afraid of the competition catching up? Arcitys (Alec Sanderson) had a little bit of insight here-

“Our S&D has been good since we teamed with each other a couple of years ago, but this year we’ve taken it to a whole new level. Back then it was like, me calling a lot of play calls, but now it’s Tyler and Chris. It’s the two people who like to get the first bloods and feel comfortable pushing up on the map, rather than me sitting back not knowing what’s going on. So every time the next round starts I’m like, Everyone be quiet, Tyler what do you want to do? And he just goes for it. He tells us where to go and how he wants to play this. Me and Cellium just have to watch the sides and trust them that they’ll get a trade. It just comes natural, it’s actually smooth, and we’re comfortable doing our thing.” 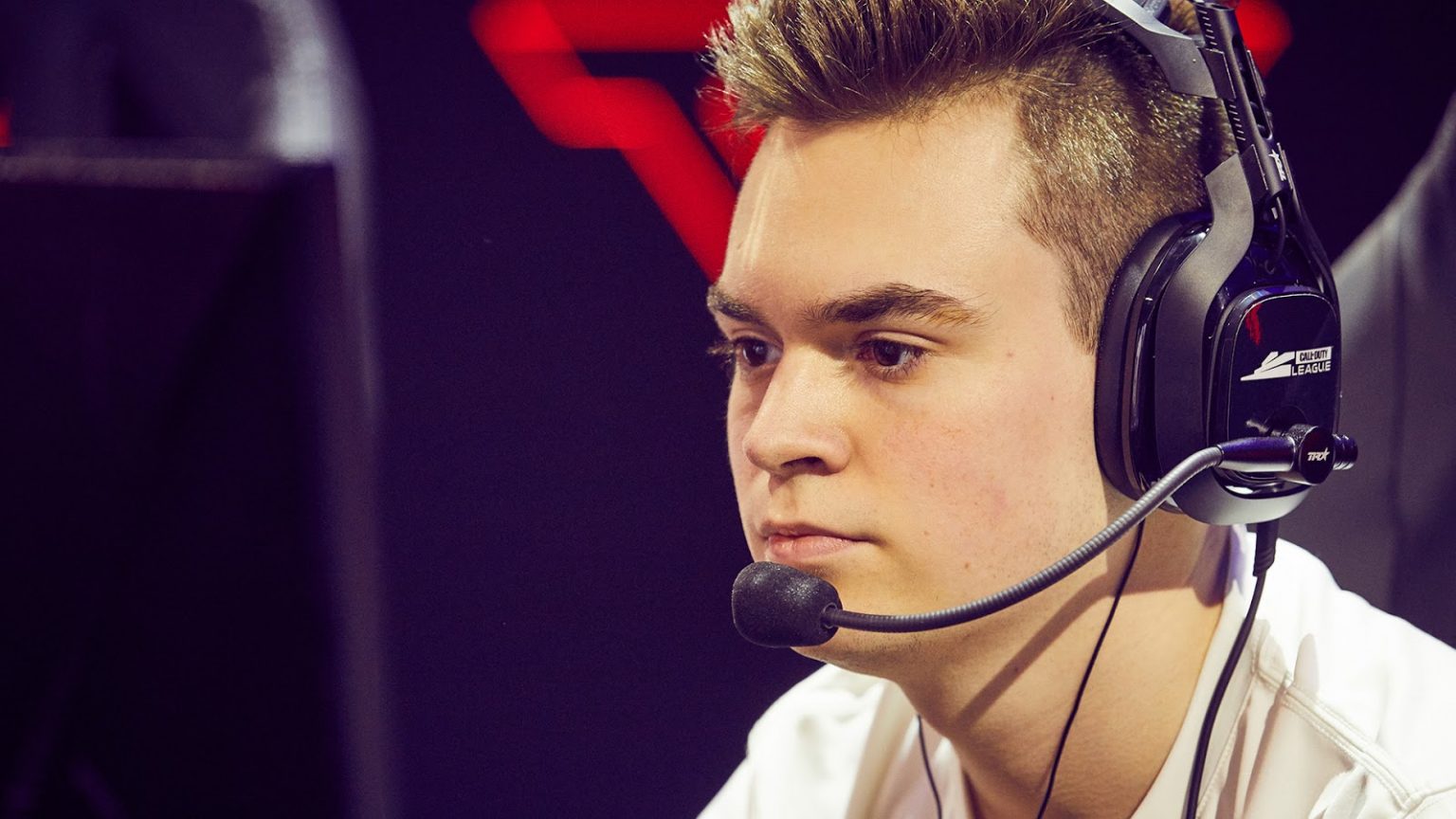 aBeZy (Tyler Pharris) at one of last years live events

aBeZy (Tyler Pharris) also had some thoughts on why they’re so good in S&D. “I mean, if I’m feeling a certain way about a certain play call then I set up the whole map before the round starts, like how I want to play the round. If I don’t do that it’s Chris, but we all chip in at times and do our thing. Our S&D has been looking phenomenal and I can’t wait for the next tournament to come up.

At the end of that Search and Destroy round that clinched the championship, Faze got the kills and then trapped three-time champion Crimsix (Ian Porter) in a corner and seemed to be messing with him. When asked about if that was intentional, Arcitys said they had to do it to him, they had been playing for three hours and needed to have some fun with it. It was icing on the cake to them, although Crimsix wasn’t having it and didn’t give it to them. Then, when asked if it would become a regular thing, aBeZy said if they were doing really well and ending on a note where they wouldn’t be in danger of losing a round they might do it again. This question of course brought up another of “Who would you like to assassinate in a round the most?”, to which Arcitys definitively answered “I’d love to assassinate Formal! He’s one of my top guys, right now, he’s my guy! I don’t care about anyone else, Formal, first person on my list!” aBeZy didn’t have a rival he wanted to take out, just that he would take the opportunity if it presented itself. 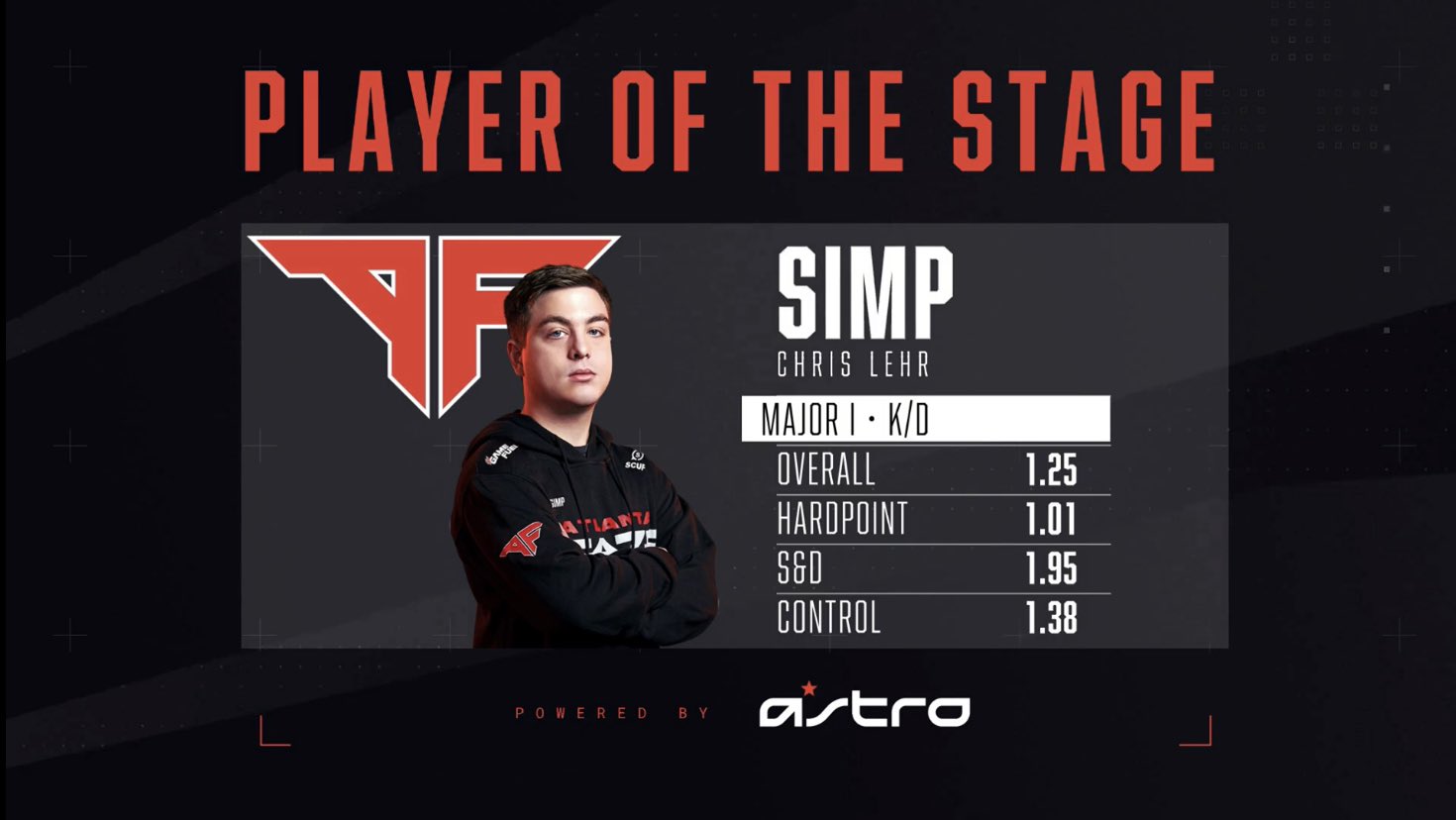 Huke (Cuyler Garland) may be killing it, but Simp (Chris Lehr) took Player Of The Stage home after the grand final

In talking about Faze’s domination, it was easy to bring up an MVP-level opponent in the grand final who didn’t look right versus them. Huke has been on a tear for the Dallas Empire this year, but facing Atlanta seemed to bring him back to earth. Arcytis said they watched two hours of VODs (footage of CDL matches) the night before, and that they knew there was a good chance they would be meeting Dallas in the grand final. While Atlanta did have to beat Dallas to advance, and Dallas would have to beat New York, Faze felt like the Subliners were a bit new and Dallas was the better team. So they watched a bunch of film to know everything they did on each map down to the S&D breaks, and they felt very prepared. It also helps when you have two of the best SMG’s in the game (Simp and aBeZy), so to them they felt like it would be easy. aBeZy echoed the sentiments, as well as feeling like they were simply playing better than Dallas, which helped counter Huke.

Beating Dallas was certainly the culmination of the stage for Atlanta, and one had to wonder if they were at all worried about having a target on their backs or feeling pressure with the only perfect record remaining in the Call Of Duty League. Arcitys yet again had an answer, but it might be a bit different than you think.

“I don’t think there’s any pressure. I think all the pressure was relieved after the event. We all knew we had so much pressure because of how this roster is stacked and put together. The pressure was already here and we got that out of the way. We just got to do our thing now. We’re going to come out every day of scrims watching VOD and actually trying to get better. It’s not going to be like smoking teams and [saying], “Haha we’re better”, we’re gonna keep coming out, finding new ways to get better, finding how to get better, and seeing what we can improve on. Obviously in the finals on Checkmate Hardpoint we got smoked, we’re going to come out and find a way to get better at that map, and there’s not going to be any laziness from us this year.” 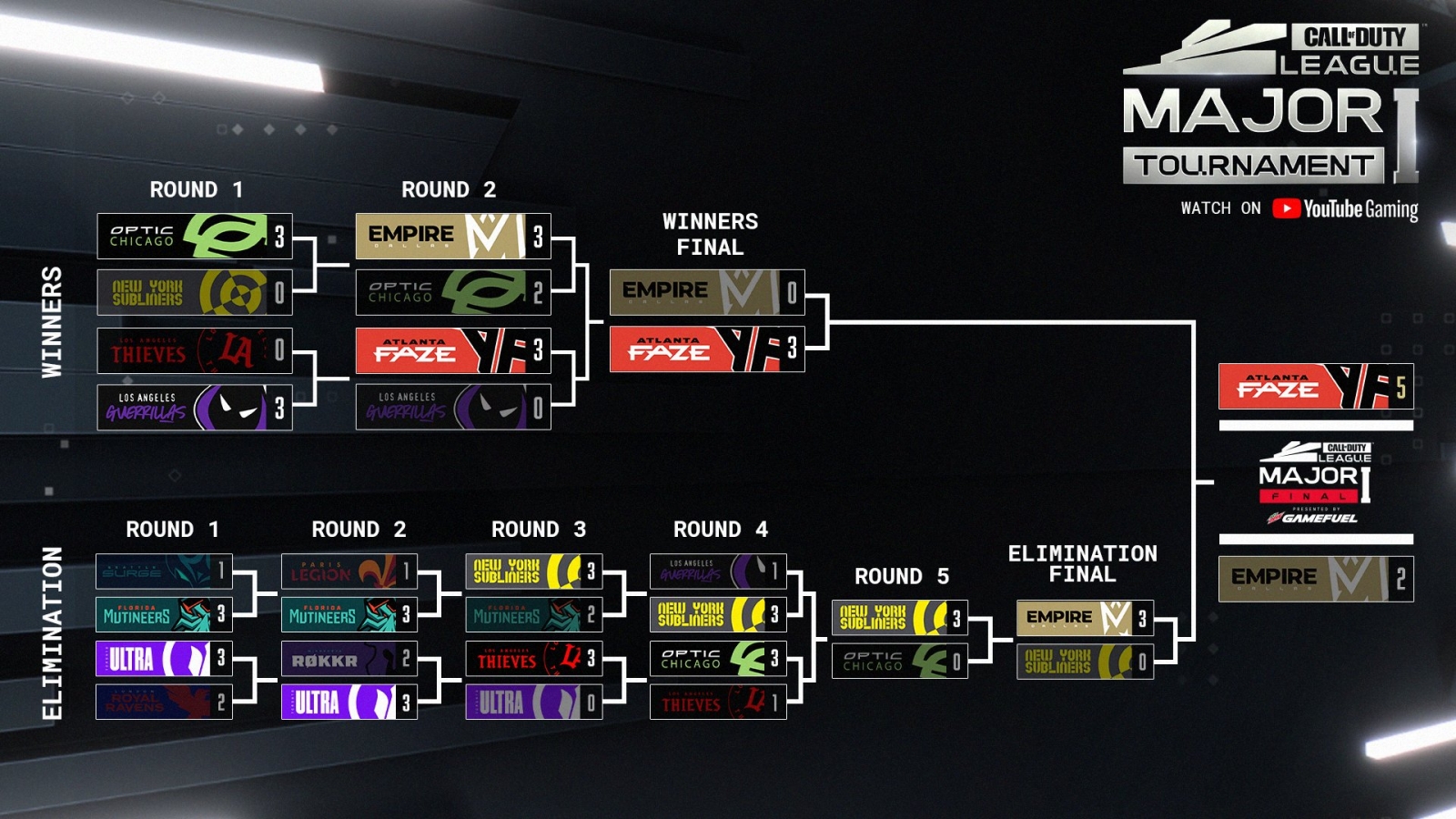 A journey through the first major, which ended in a 5-2 Atlanta Faze victory over Dallas Empire

While the pressure may be relieved, some may wonder if Faze had any feelings of sweet revenge by beating the team that crushed them in last year’s championship. aBeZy didn’t really think so, saying, “They’re obviously a really good team, and no matter what we’ll have to come out every single match and prove everyone wrong. Everyone, in my opinion, hates on us as a team, they always want us to lose because we’re obviously very good. I feel like every team wants us to lose, so no matter what event or tournament it is we’ve got to come out hot and we have to play very well against every team, especially the top three, top four teams. So I’m not really worried about what anyone says about that [revenge].

Atlanta may not have been concerned about revenge, but one could wonder if there was anything to be truly concerned about in general with how good Faze was in stage one. aBeZy talked about it like a true pro should, knowing that there were still things to improve upon.

“I feel like there’s quite a few things in our respawns that we can fix right now. I think in one of the Control maps in the grand finals we choked the first round very bad (they did in map 4), obviously that happens and is gonna happen to any team, but we can definitely improve on little things in respawns for our team, that’s the main thing we struggle on right now. Obviously we’re gonna keep working on S&D too, we want to stay ahead when it comes to S&D, we don’t want to fall back and let teams catch up. So we’re gonna work on every game mode throughout this time before we get to stage two.” 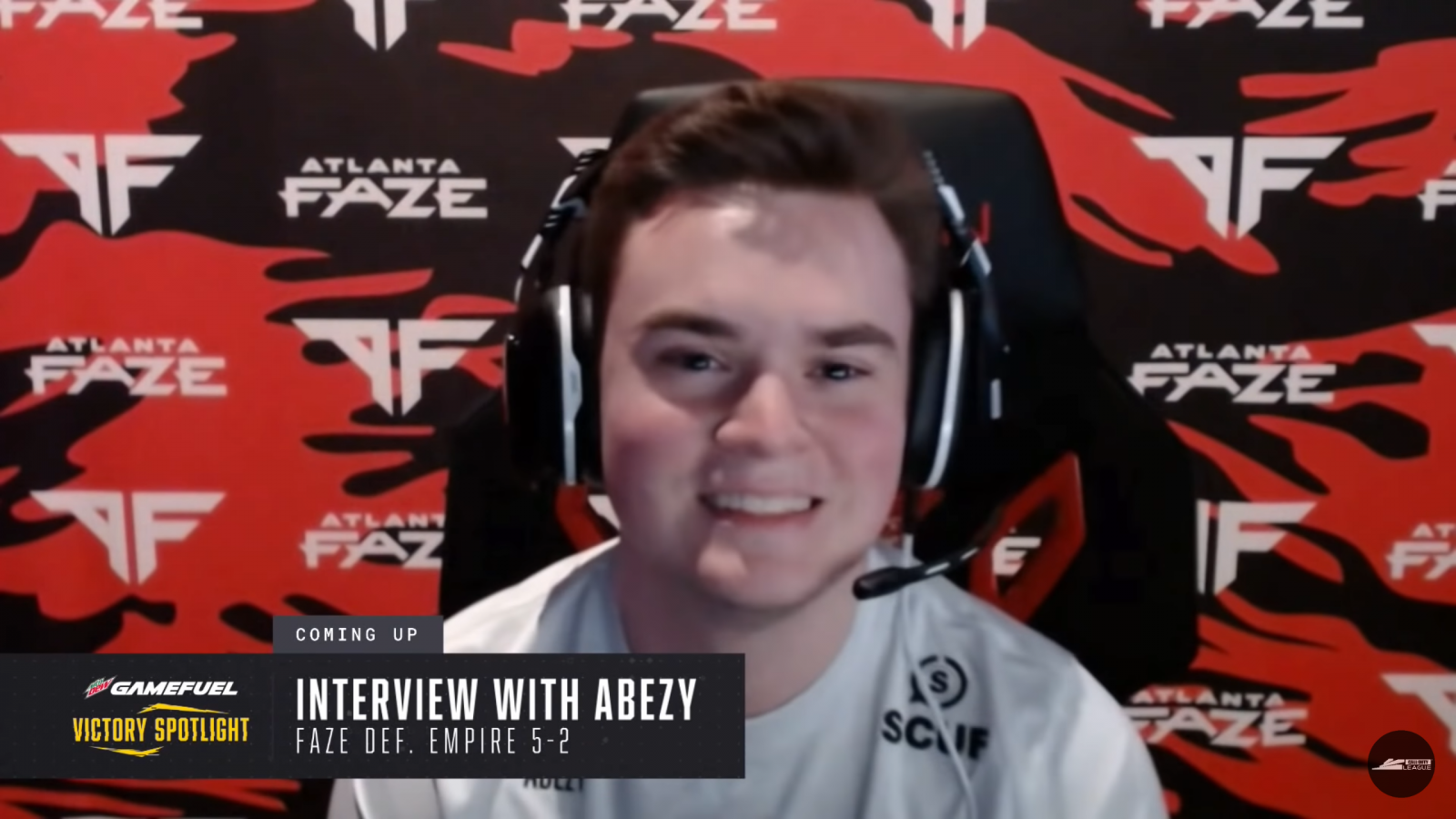 Arcitys added onto what aBeZy brought up, saying, “I think in scrims there’s times where we 9-0 a team [in Control], but lately in matches it’s been iffy, it hasn’t been that good. So if you asked any four of us what our best game mode would be before the start of that major it would be Control. We were going into scrims just smoking teams and during the league (pro matches) we would sometimes lose or go 3-2. We’ve gotta work on that, I don’t know if it’s the nerves or the different playstyle, but it’s something we all have to work on and that we know we’ve got to work on, so that’s what we’re going to start heading into scrims doing.”

Speaking of Arcitys, Faze just made it through their first major and stage with him. He was on the Chicago Huntsmen last year, so it’s fair to ask how his time here has been compared to there. Arcitys was more than happy to reply with his experience.

“It’s very hard to compare teams right now, [it was] 5v5 to 4v4 [change], the game change. I just know it’s hard not to be comfortable with these guys, I’m not saying I wasn’t comfortable with the Optic(previously Huntsmen) guys, but these guys are my best friends coming up. Chris, he came up and became one of my best friends, Tyler, one of my best friends, I’ve known Cell for years now. You can see in the S&D, we all know what we want to do, what we feel comfortable doing. At the same time, that Chicago team, it was a different game, a way different game compared to this game. I couldn’t do what I can in this game, I can control the tempo of this game compared to last years. There was just so much going on, my brain was spinning in circles just trying to think of how to play it, I was breaking down mid game. This game, I’m calm, I’m collected, so not really comparing teams, but comparing games, I feel way more comfortable in this game.” 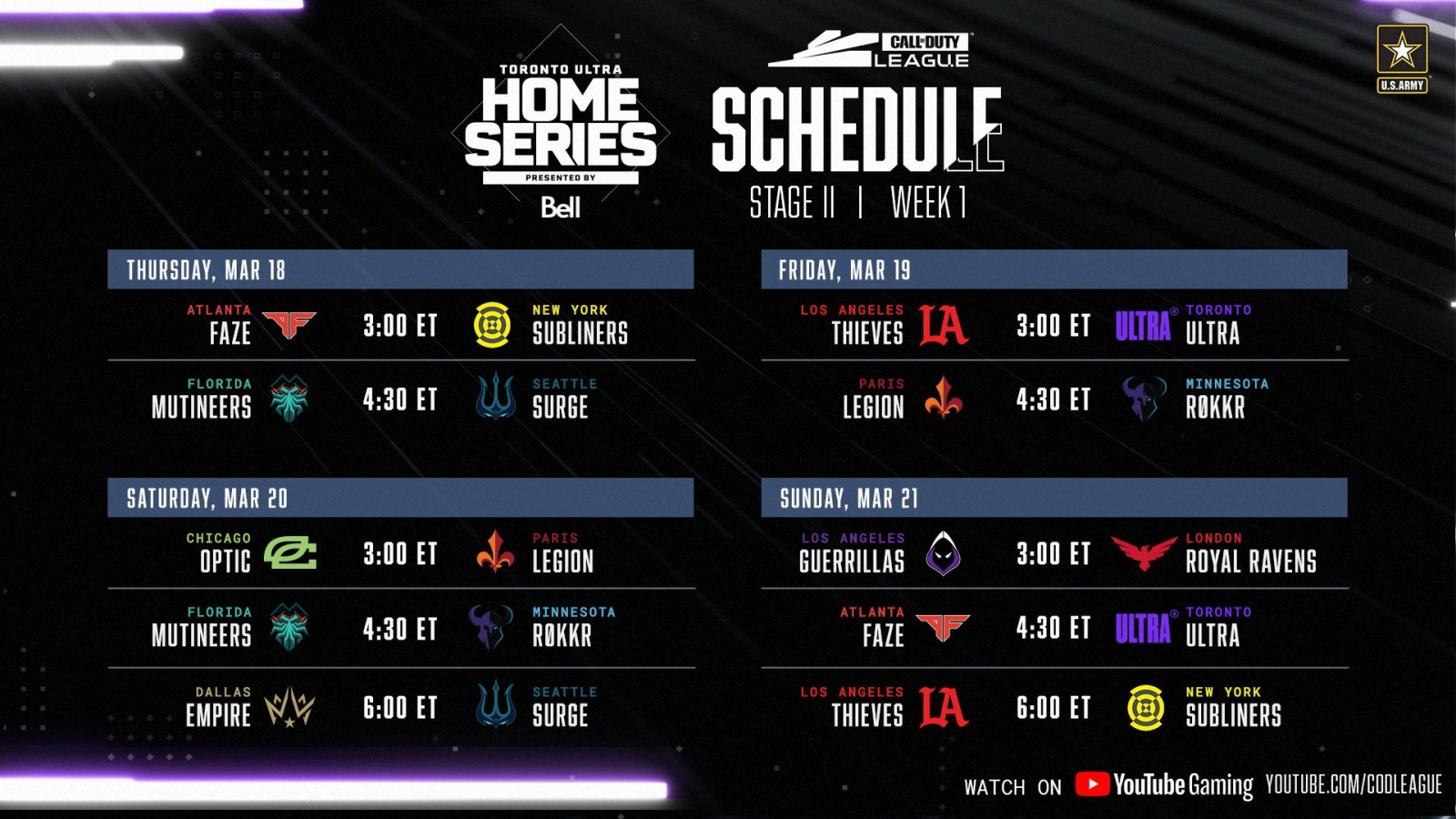 Thankfully Arcitys and crew have a week to be calm and collected, as after each major a break is scheduled, but after hearing them talk turkey one would assume they’re probably already breaking down their opponents video footage and getting ready for the next home series. Call Of Duty League will be back, with the stage one champion Atlanta Faze in tow on March 18th. You can follow the league both live and after hours on the official Call Of Duty League YouTube channel right here. If you want to jump into the game, check out CallOfDuty.com, and if you want to know more about it first, check out our review right here.