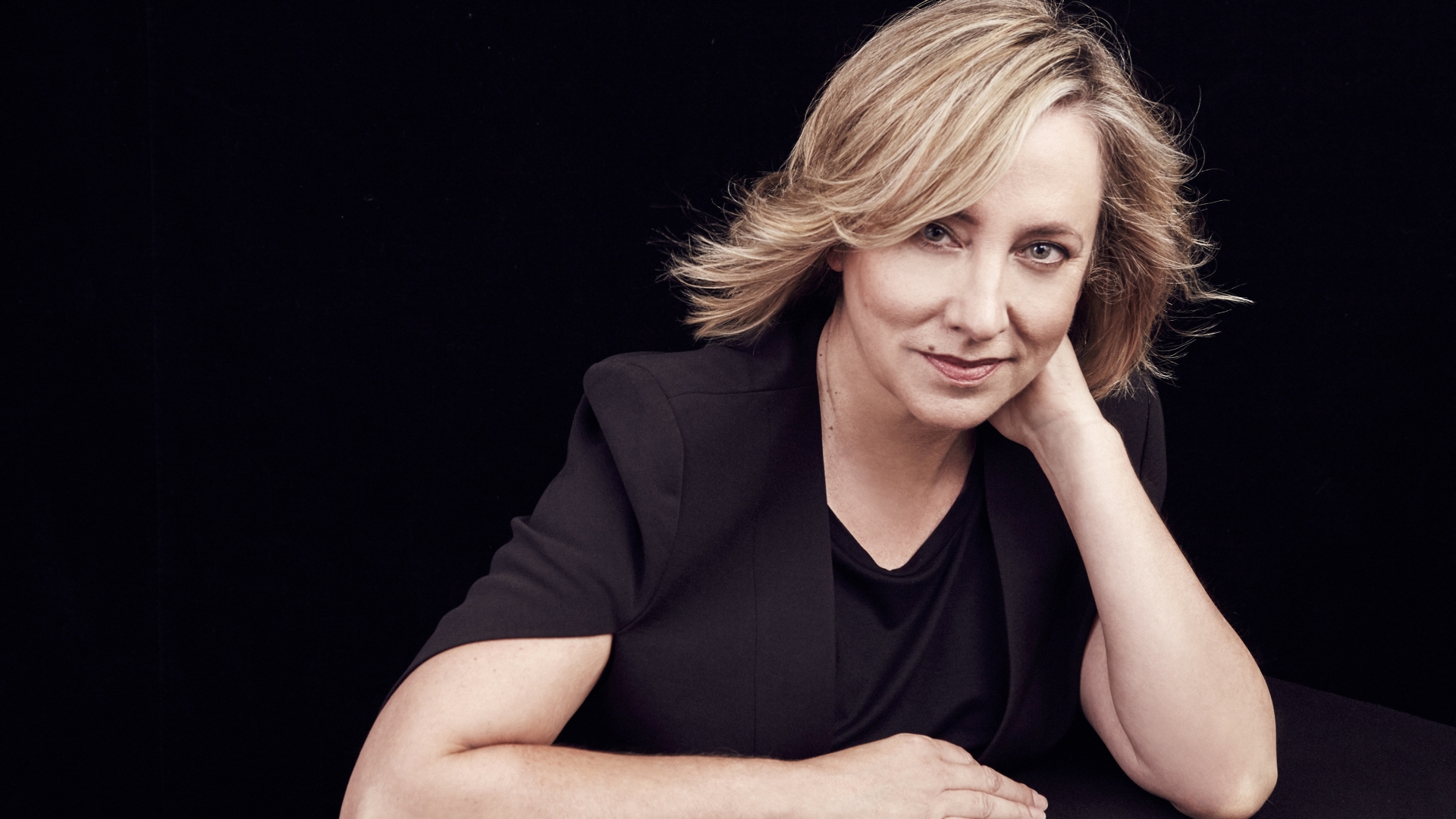 We sat down with one of the preeminent voiceover talents for the freshly-released Agents of Mayhem, Kay Bess, to talk to her about her role in the game, as well as voice acting in general.   While we work through our review of the game, stop in and take a look behind the curtain to hear what some of the talent that brought it to life had to say about the process.

GT: First off, thanks for taking the time to talk to our readership!

KB: Thank you for inviting me!

GT: You’ve been doing voice work for a while – Call of Duty, Ana in Rise of the Tomb Raider, Dead Space, Queen Cumulus in Skylanders, and you are even the voice of Property Brothers on HGTV. Now you are playing Persephone Brimstone – the leader of M.A.Y.H.E.M. in the upcoming game, Agents of Mayhem. What would you say is the most challenging or rewarding role you’ve had thus far, and why?

KB: There’s a challenge in every video game role, I think, and the challenges are all a bit different. That’s part of what makes the work so fun and interesting. The challenge with Persephone was staying consistent with the character over the period of time we were recording the voice work. It was close to three years, and sessions were often sporadic. I remember going in for my second session thinking “okay now, what accent did I use?” The voice director, Amanda Wyatt, was always so great about starting the sessions with playback of what I recorded prior. That was a huge help. By the 3rd or 4th session, it started settling in my bones and was easier to pick up each time.

With Ana in Rise of the Tomb Raider, it was the heightened emotion in some scenes that was most challenging. Recording those kinds of scenes alone requires a lot of imagination, and of course a great director – Philip Bache did the voice direction for my sessions on that game. A skilled director is invaluable, and I’ve been fortunate to work with some greats.

GT: With this much video game work under your belt, are you a gamer? If so, whatcha playing?

KB: Oh man. I’m not a gamer, but mostly because my days are so full, and then at night I collapse in front the tv and watch Star Trek. I’m so strict about what I let my kid watch and see. She loves video games, but for now is relegated to Minecraft. In a couple of years, I’m sure we’ll end up playing games together. I am gonna play Agents of Mayhem, though, for real. There are a few of us in the game who are gonna have a party and play it together. I can’t wait!

GT: Some of your characters have been downright kooky – what’s your warmup for those over-the-top games, something that seems pretty likely in Agents of Mayhem?

KB: Ha! Yes, well, most of the characters and ALL of the Agents in AOM are totally kooky. I play a few minor characters in cut scenes that are pretty whack, for sure. But Persephone is absolutely the adult in the room. The Woman. In. Charge. I think if she heard you suggest she might be kooky, she might have you assassinated. :-) But I digress… There’s no real warm up for me per se. You just kinda find a starting place and go! Then the director pulls you back or pushes you further. It’s kind of a dance, you know?

GT: How much of the game are you given to work your magic? Do you get a video of the game being played, or are you handed a script with some direction, or does it vary?

KB: We get nothing but our lines for the day’s session. That’s it. We might get a picture or a drawing of the character, but there is nothing in print for us to read or see other than that. The director will give us back story and some context at the session before we start recording and will sometimes read us in with the lines of the character playing opposite us, but even that’s pretty rare in my experience. Video game work for a first time character is really like flying blind. You depend upon a lot of other people to make it work. It’s quite collaborative.

GT: You do commercial voiceover work as well — Lubriderm, McDonalds, Honda, DirectTV just to name a few — do you get excited when those come on, or do you run for cover and change the channel?

KB: Oh man, I turn up the volume and scream for everyone to come in the room! Of course, no one’s within earshot, so I revel in solitude. I did a Toyota TV spot that ran several times during the Super Bowl one year. That was awesome.

GT: What’s the dream gig? What’s the “brass ring” for you? Disney feature film? The next iconic Apple commercial?

KB: You know I actually did a really cool vo tv commercial for Apple – remember the Mac Guy and the PC guy? It was an awesome commercial that of course never aired and will forever be locked in the Apple Vault to be seen by NO ONE. Ah well… So it goes. The dream gig for me is a recurring role in an animated series – you know, a steady paycheck! I gotta say I’ve grabbed a few brass rings. I feel very fortunate to have worked as long as I have and to have done so many kinds of voice work. I am totally thrilled to be working in games. It is the hardest, the most fun, and the most rewarding voice work I’ve done. I love it, and hope to keep doing a whole lot more.

GT: How does one go from stuttering as a child to doing voice work since the 90s? Was that something you overcame on your own, or did you have to enlist help?

KB: Stuttering is something I wound my way out of over a very long period of time, and frankly, it still creeps up now and again in particular circumstances where I sense someone is passive aggressive or hostile toward me, or puts me on the spot to embarrass me, or is manipulative in a sociopathic kind of way. It’s different for everyone who stutters and is still quite a mystery. I can only speak to my own experience, of course, but mine was emotionally based. My parents were very sensitive to it and were very supportive and helpful. It took a lot of therapy, as a child and an adult, to really come to understand the fear at the root of it. I never stutter when I sing, and I rarely stutter in work settings. If I do, I’m pretty good at covering for it.

GT: Tangentially, how does one go from from being accepted into seminary and land in voice work?

KB: Well, you know preachers can be quite dramatic, and actors can be quite preachy, so it’s not really that much of a stretch, right? :-) The fact is, actors and theologians are in search of the same thing: Truth. Acting at its finest, whether on stage or screen or in voice work, illuminates the human condition, helps us find what is common to us all and binds us together. We all love, we all laugh, we all hurt, we all suffer, we all fall, we all seek forgiveness and redemption, and we all want to be whole. When actors participate in a film or play or yes even a cartoon or video game that transcends simple entertainment and makes us feel something real, then we as artists have grabbed the brass ring. We’ve done something noble and worthwhile. Studying theology for me was really all about the same thing. I will say, my dad is a retired preacher and I have great respect for him and for his life’s work. His whole life has been about accepting the outcast, welcoming the unwanted, serving the poor, visiting the incarcerated, being a friend to the friendless. His preaching, his life, his work has been very influential. I’ll always seek to be kind to others, to be a light in the darkness, and be a pursuer of truth, as an actor and as someone who continues to study theology. I’m always searching, always asking big questions, trying to make sense of things. I think ultimately I chose acting as a career because actors are my people. We’re all a little off, a little nutty, a little weird. And I love that about us. When I’m hanging out with the cast of a show I’m in, when I’m immersed in a character on a stage or behind the mic, I’m home.

GT: Voicework is entirely underrated in this industry — I’ve been doing this for nearly 20 years and I don’t even have a clue how to get into it. How would an aspiring voice talent get started? (in addition to listening to your B-Hive Podcast)

KB: Oh yes, please do listen to my podcast! You can find it on iTunes: The B-Hive Podcast: Women in Voiceover. Men can listen, too, I swear. And now to your question: At the root of all great voice work is acting. So I think acting training is primary. Don’t be in too much of a rush. Dig deep. Once you’ve got some acting training under your belt, then make your way to a beginning voiceover class, preferably in a major market where you’re going to find coaches who really have substantial work under their belts and who understand trends and technique. If you’re not in a major market, there are many coaches in LA and New York who teach privately via Skype. It’s a great access point. And then, networking. Once you know a coach, ask questions, ask about finding groups to participate in – even on Facebook. There’s a lot of great info to be had in that forum. There is so much vo work all over this country, all over the world, really. If you wanna do gaming, however, you’ll need to be where the games are made. So, that means Los Angeles, San Francisco, New York. For animation it’s Los Angeles. A vo colleague of mine, Dee Bradley Baker, has an exhaustive website dedicated to this subject: iwanttobeavoiceactor.com It’s fantastic and I highly recommend it.

GT: You’ve had an amazing career thus far, and I can’t thank you enough for your contributions to our favorite games. Thanks for chatting with us!

KB: Oh man, thank you for loving and playing games! I hope to have the privilege of doing many, many more. And if I’m so lucky, I’ll continue to strive for performances worthy of your praise! Thank you again for having me. It’s been a blast.

Agents of Mayhem was released today on PlayStation 4, Xbox One, and PC — stay tuned for our full review of the game, and check out the links in this interview for some well-earned advice (and an ongoing podcast) on how to get into the industry.