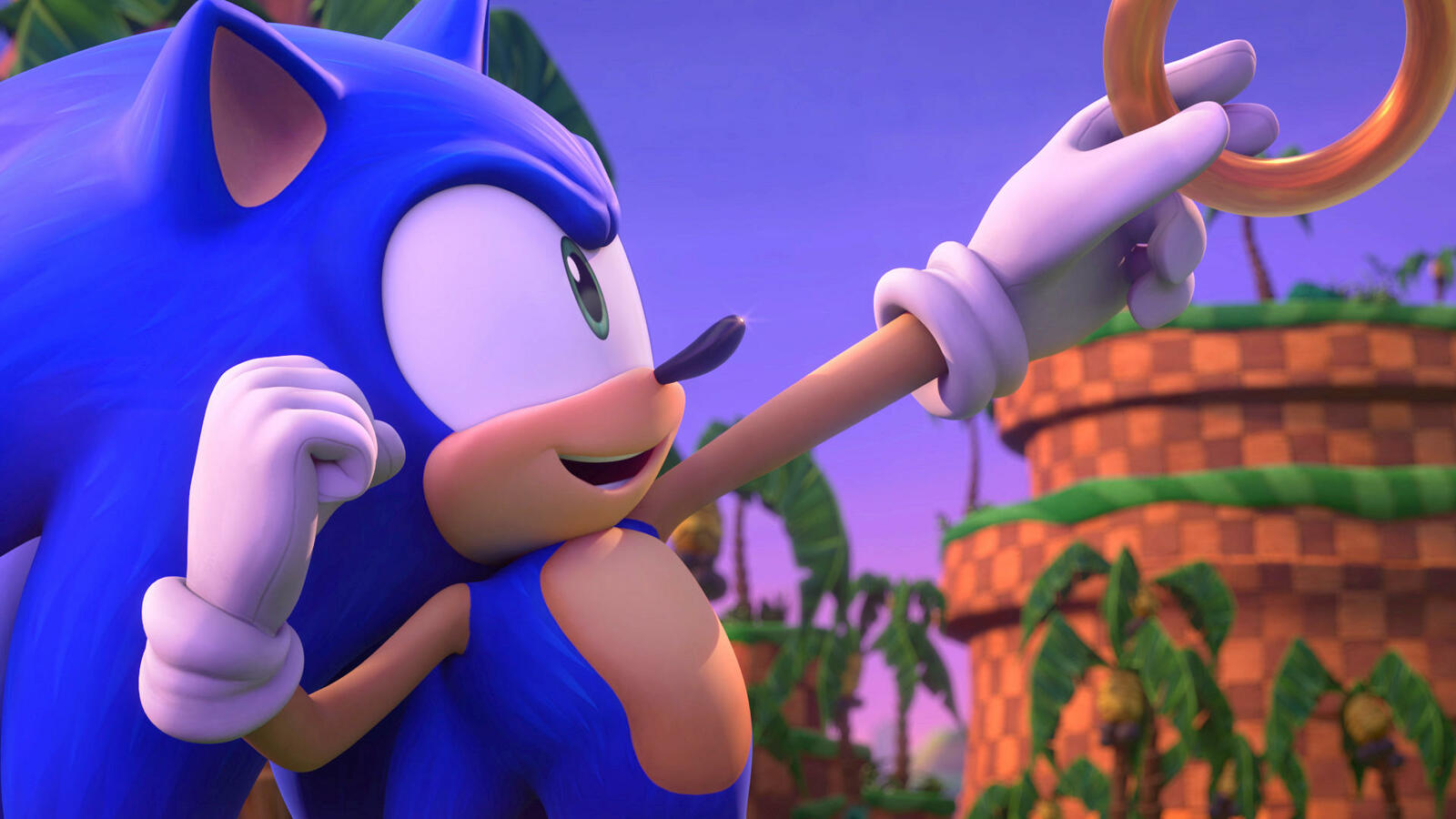 Sonic has been a busy guy this year. Between movies, games, and comics, I feel like I’m seeing him everywhere. Just when you think he may be running out of steam, however, he picks the pace back up to end the year with Sonic Prime, a Netflix series that debuts later this month. While David Flynn and I normally settle for just talking about Sonic, today we are doing one step better in talking to the hedgehog himself. Deven Mack, the voice of Sonic, as well Logan McPherson, the executive producer of Sonic Prime, join us to dive deep into the inner workings of the show and what makes Sonic who he is.

Jack: Thank you both for your time today. Just to get right into it – because I want to talk to Sonic…

Jack: Sonic means a lot of different things to a lot of different people, but you’ve actually been him, so you have the inside track. In your mind, what are the key components of Sonic that you wanted to bring into your performance?

Deven: For me it’s about being able to really portray that confidence. That being cool and calm and funny under pressure. Being able to adapt to any kind of situation. Even when Sonic doesn’t have a plan, he’s still able to be like, “okay you know we’re gonna figure this out, we’ll get through this!” To have that sort of confidence I feel is something that people really connect with. I know that I did as a little kid for sure. 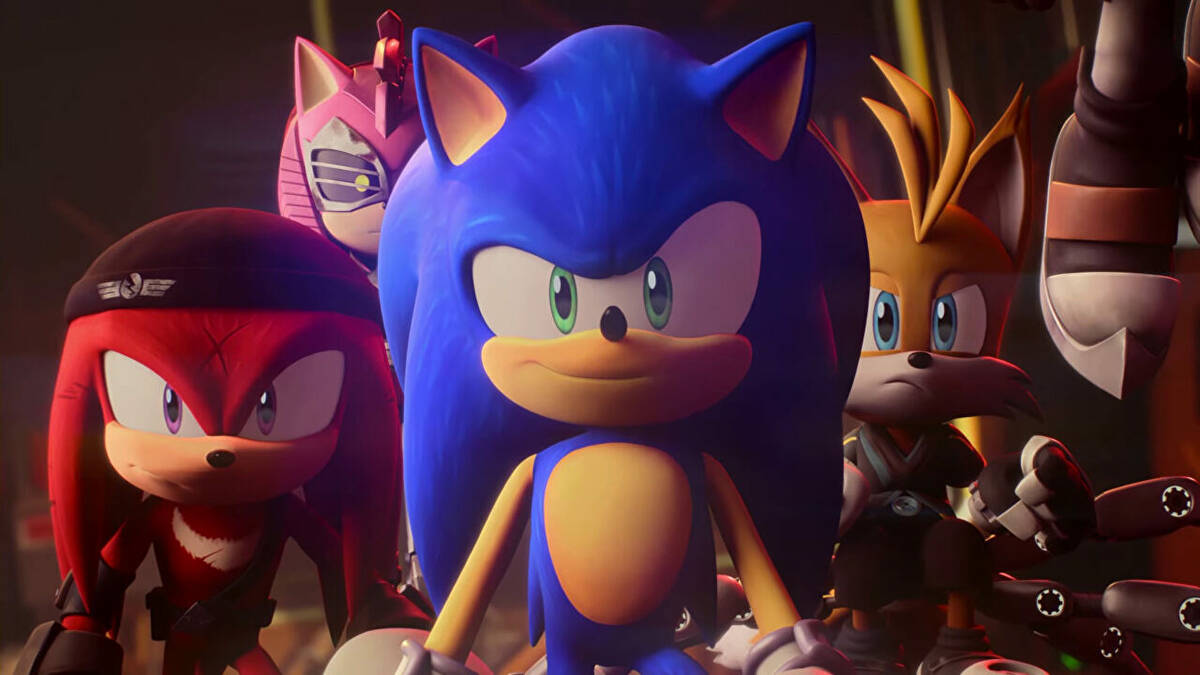 Jack: Logan – with Sonic Prime, you’re adapting a video game into a different medium. That’s a big creative undertaking. I’m assuming there’s some collaboration with Sega while you’re making this show. Can you broadly describe that relationship a bit? Like creatively, how much of Sonic Prime is you and your team versus the Secret Sonic Council at Sega?

Logan: Well, we worked very closely with Sega to develop and produce Sonic Prime. They’ve been amazing and super generous partners the entire way. The story is based on existing mythology from the games, and then we use that as a springboard to launch him on a journey that is completely unexpected and takes you into all kinds of different directions. But it is rooted in that mythology, so fans that are familiar with Sonic and know his legacy will find familiar elements. A fresh, brand new audience will also be able to sign up, join the ride, and experience it in different ways. Boys, girls, legacy fans, adults, people of all ages will enjoy the ride.

It really does stretch Sonic as a character. It takes him to emotional places and adventures that I don’t think we’ve ever seen before. There’s a lot of unexpected twists and turns. It was really important to us that you felt his authenticity from the games and that we portrayed those familiar aspects in a very faithful way, so that it has that truthfulness behind it, but also takes us in fun directions at the same time. 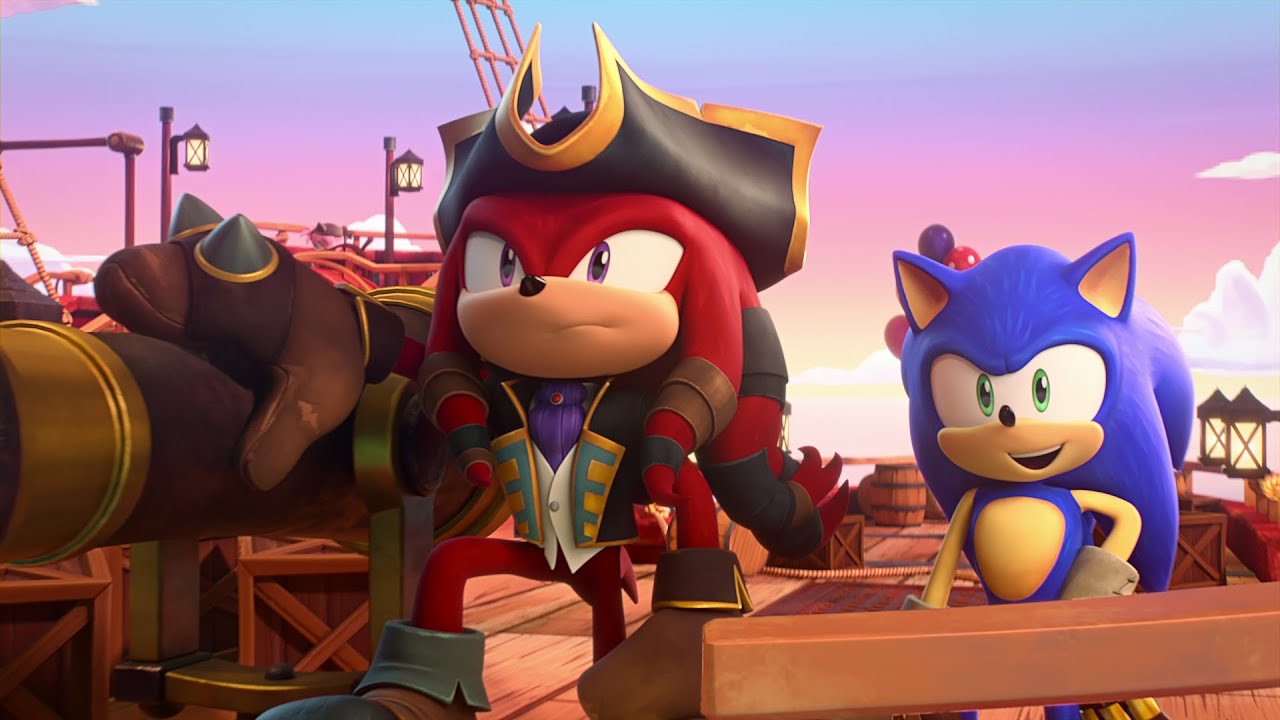 David: This one’s for both of you. What was the last book you read?

Logan and Deven take a critical hit and are momentarily stunned

Logan: The last book I read was called “Neil and Me” – it’s Neil Young’s book, written by Neil Young’s father, who you know, was an instrumental person in Neil Young’s life. He was responsible for breaking up his family! A lot of Neil Young’s journey that he went through as a person and as a songwriter is based around that pivotal experience where his family was broken up as a kid. His father moved out of his house, he lived with his mom in Winnipeg, and he ultimately found his own way in music and his journey.

His father was a writer for many Canadian newspapers, but also Hockey Night in Canada¹. He’s actually in the Hockey Hall of Fame as a writer. Even though it’s biographical, he is just a beautiful writer. It’s written almost like a piece of fiction, where the detail and description is just…it’s so detailed and spot-on that it really puts you in the time and place and settings. For somebody who is a storyteller by trade, I really appreciated the way he described the character journey and the settings. It’s a pretty amazing book. If you’re a Neil Young fan, I highly recommend it!

Deven: I wish I had an answer like that!

I haven’t been able to sit down with a good book in a long while, but I can tell you the last “thing” that I read. It was still a few months back, but it was volume 1 of IDW Sonic²…

Deven: …which I did thoroughly enjoy. Rough and Tumble immediately became my favorite characters. But I don’t really have anything deeper to say than that! 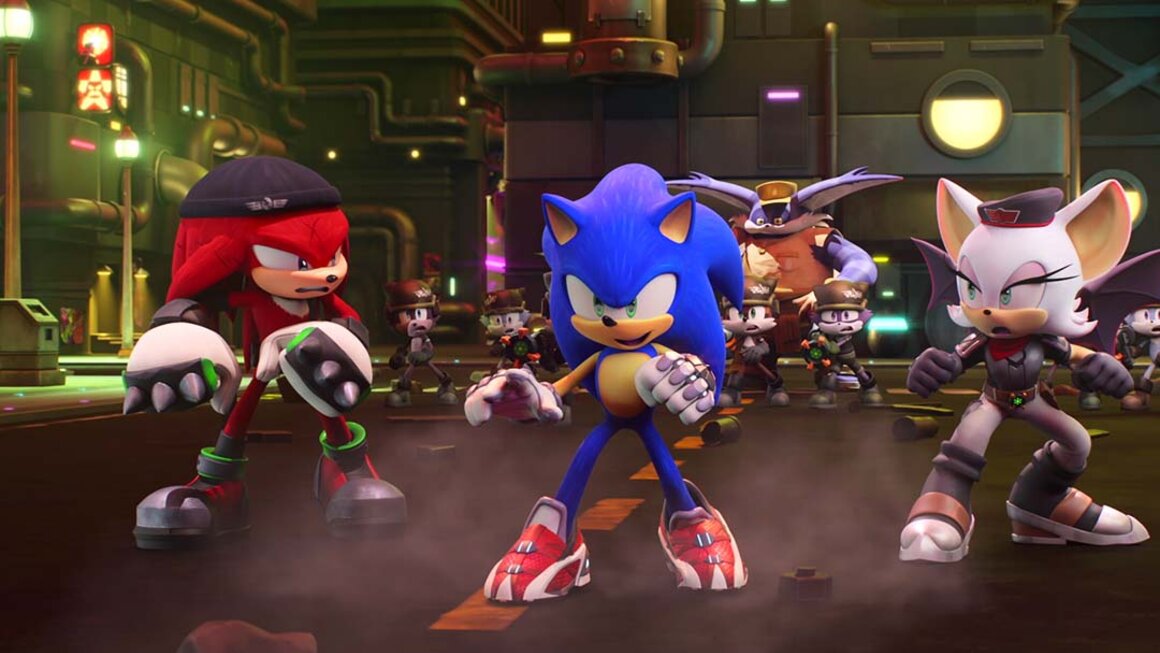 David: That’s alright. What were the most fun and difficult parts of the process when making Sonic Prime?

Logan: Well, honoring the legacy, first and foremost. Ensuring that we had that authenticity. The team at Sega examined and analyzed every single detail, from eye position to the placement of [Sonic]’s quills. Everything went up and down the layers of Sega to ensure that it was on point.

From there, it was taking things in new directions that were unfamiliar, and at times, uncomfortable. We really do stretch [Sonic] as a character, and he kind of…it’s a redemption story. He has to clean up his own mess and understand the things that make Sonic amazing, but also his Achilles’ heel, his vulnerabilities. Taking him into those places that were a little unexplored and uncomfortable, but doing it in a way that we felt respected the brand and respected the legacy. That’s just a challenge where you wonder if you’re doing the right thing, like “can we really do this with Sonic!?” I can tell you though that Sega in Japan enjoyed the ride, and we are so thankful for their collaboration.

The entire crew really got invested in the production. In Sonic’s 30 year history, there’s an access point for everyone on the crew – the games, or the cartoons, or whatever it was. It was really a love affair from that standpoint. The collaboration that came from the crew’s experience and Sega’s collaboration really made for something that I think is unique and different. I think fans are really gonna enjoy it. 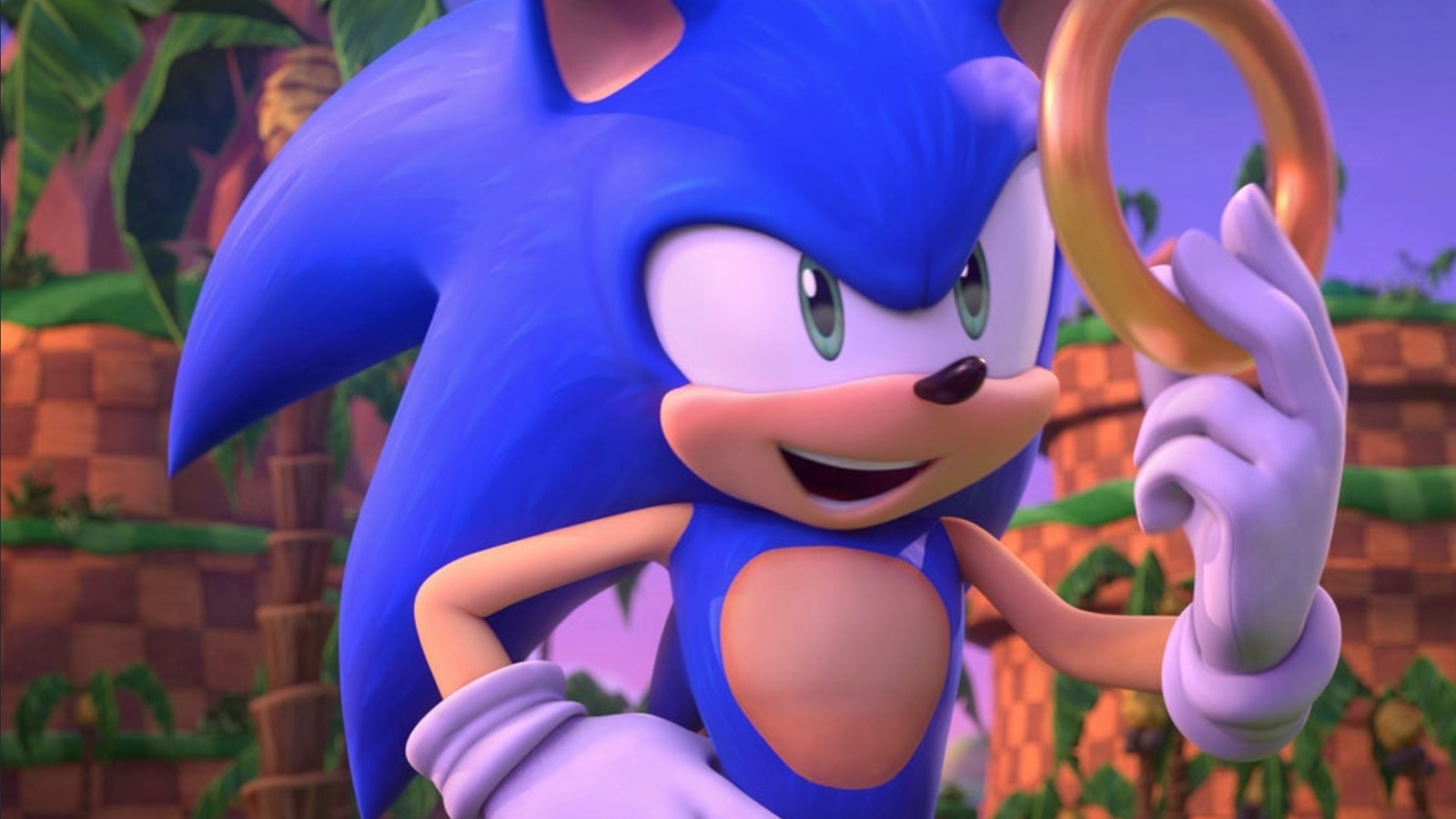 Jack: Alright, Deven, this doesn’t just have to be limited to Sonic voices, but was there any kind of voice or portrayal in the back of your head that you felt really influenced how you did your Sonic?

Deven: Honestly, it’s me just drawing upon the entire legacy of the character. I listened to every single one because I’ve enjoyed the games and cartoons that featured all of these different voices. That’s everyone from Jaleel White, Ryan Drummond, Jason Griffith, Roger Craig Smith…even Jun’ichi-san³…Ben Schwartz! So I’m pulling from these different things.

Every now and then there will be a line that will make me think, “oh, you know that kinda reminds me of this one,” or “that kinda reminds me of that one.” It’s a lot of mixing and matching, in addition to throwing my own sort of spin in there. Just having a lot of familiarity with the character helped me to feel very comfortable with either drawing influence from others or just saying, “you know what? This is my own place to put my own sort of spin on that.”

It’s been a lot of fun. I’ve been able to do just all kinds of silly things and all kinds of intense and cool things. I get to explore so many different emotional places with the character. It’s been really fulfilling for me.

Jack: I thought you did a great job! 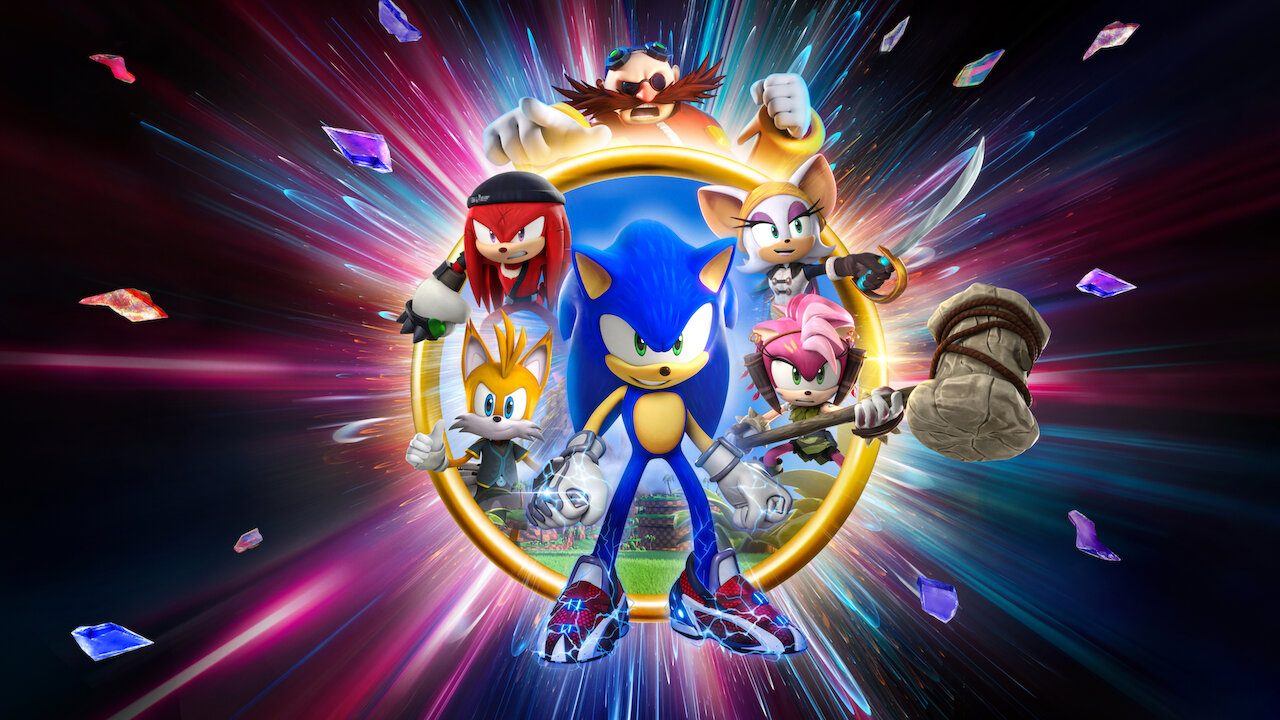 Jack: So Logan, one trait that really stood out to me while watching Sonic Prime was that there was a lot of action – I’d say it’s primarily an action show – but it’s also a lot of slapstick. Sonic gets smacked around a lot, hit by cars, all kinds of abuse. That leans a little more towards lightheartedness. In your role, what goes into balancing the overall tone of the show? How do you balance it between selling the stakes and having fun?

Logan: Yeah, absolutely. The series is action forward. It features real jeopardy and high stakes, but we also don’t want it to be intimidating or really scary or anything like that. Sonic is such a lovable character that the humor and the comedy that he brings to the situation really helps undercut the sentimentality. It allows you to get away with some of those sentimental messages and feelings that are natural with such a big story. We found that the balance of high action, real drama, real emotion, and character comedy was the perfect mix for Sonic as a character.

Jack: Real quick, for both of you: favorite Sonic game!?

Logan: I go with Sonic Adventure 2.

Jack: Nice, nice, I agree! Thank you both very much for your time!

You can watch Sonic Prime on Netflix starting December 15th. For everything on the blue blur and more, stay tuned to Gaming Trend.

¹ A Canadian television branding primarily known for broadcasting Hockey. This is a big deal if you are Canadian!

² The current ongoing comic book series for Sonic the Hedgehog, published by IDW Publishing. It’s neat, check it out! And Neil and Me, while you’re at it!

³ The Japanese voice actor for Sonic, Jun’ichi Kanemaru. I do mean the voice actor. He’s been voicing Sonic since 1998!