So Untale: King of Revinia looks to be a cool tale full of mystery and intrigue. What were your inspirations for making this game?

Thank you for these nice words! Sure, like every writer I couldn’t do without sources of inspiration. First of all, it’s my love for intriguing stories which preserve internal consistency and are filled with great twists. For many years I was eager to create something of this kind myself. Secondly, it’s my desire to entertain others. Thirdly, I’m an avid fan of such masterpieces as “Game of Thrones” (books and a major part of TV series) or games like “Dragon Age: Origins” with their thought-out choice system.

Actually, most of my inspiration came from people who kept complaining that they lacked a good story in games. For example, once I watched Pewdiepie’s video where he said that he often skips dialogue in games because he doesn’t want to spend hours on the story which “developers don’t bother to make better than mediocre”. (It’s not a direct citation, but it’s the thing that stood out to me.) I think Felix has good taste in games or books, so from time to time while writing my script, I recalled his words. I wanted my story to be interesting, entertaining, consistent, with no plot holes and where every single element is interconnected with the others.

Untale will be Monument Point’s first release. How are you feeling about the launch?

I’m glad we’ve almost made it. For more than a year and a half my team and I have been working to create a game from scratch. We don’t have access to crowdfunding (It’s unavailable in Russia) or publishers or investors,  so I financed the whole thing with my own salary. Everything wasn’t easy, but now it’s truly incredible to understand that we’re about to release. 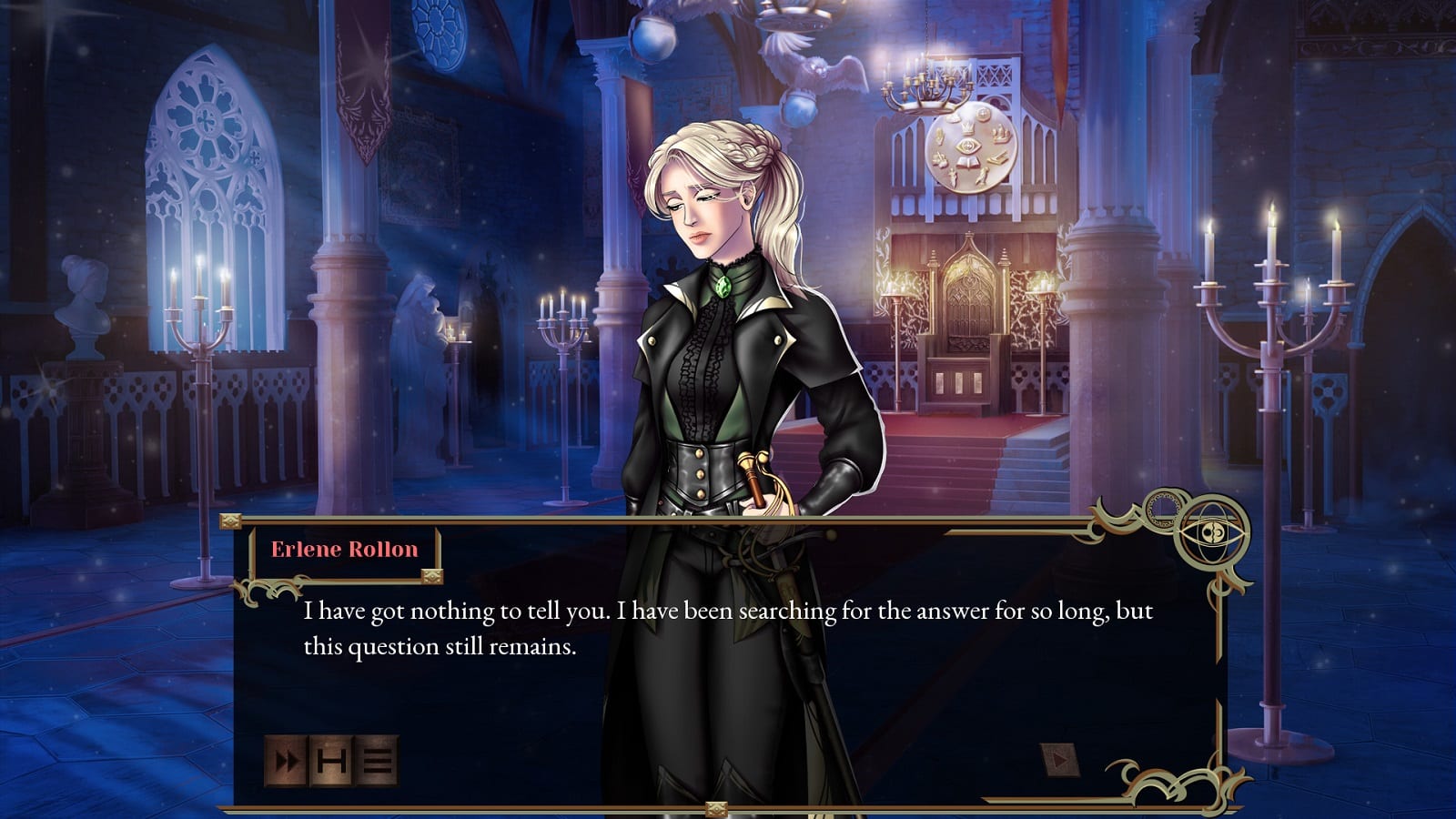 Everyone in the team is excited as well. We hope people will love what we’ve created.

The story of Untale revolves around the death of the current king, with you taking his place. How did you decide the overall story of the visual novel?

That’s actually a funny story. When it all started I wanted to create a small project to be my first one: A visual novel 4 to 6 hours long. So I needed a simple but catchy idea. A dead king in the throne room, no witnesses, and an ancient legend about a Statue which protects common people sounded pretty cool.
I began writing the story, then I showed a piece of it to my friends who loved it. I was inspired. I decided to follow my love for complex twists and the game itself began growing. While creating the script, I realized how deep all the characters can become, how numerous the endings can possibly be and how detailed and rich the game world can I create. After a while, what was planned to be a short story turned into the project with 40+ hours of gameplay and so much text that would have possibly made my laptop freeze.

The same goes for everything in the game. We have 3 times more art than was planned, some completely unique game mechanics and features, a voiceover and music written by our own composer.

The visual novel comes with 13 different characters. I have to ask, who is your favorite?

For me personally it’s Gerald Kolas – the eldest son of one of the king’s counsellor, Norbert and a friend of the main protagonist. A handsome young man and almost the living image of his father. We even created some symbolic details in their appearances. 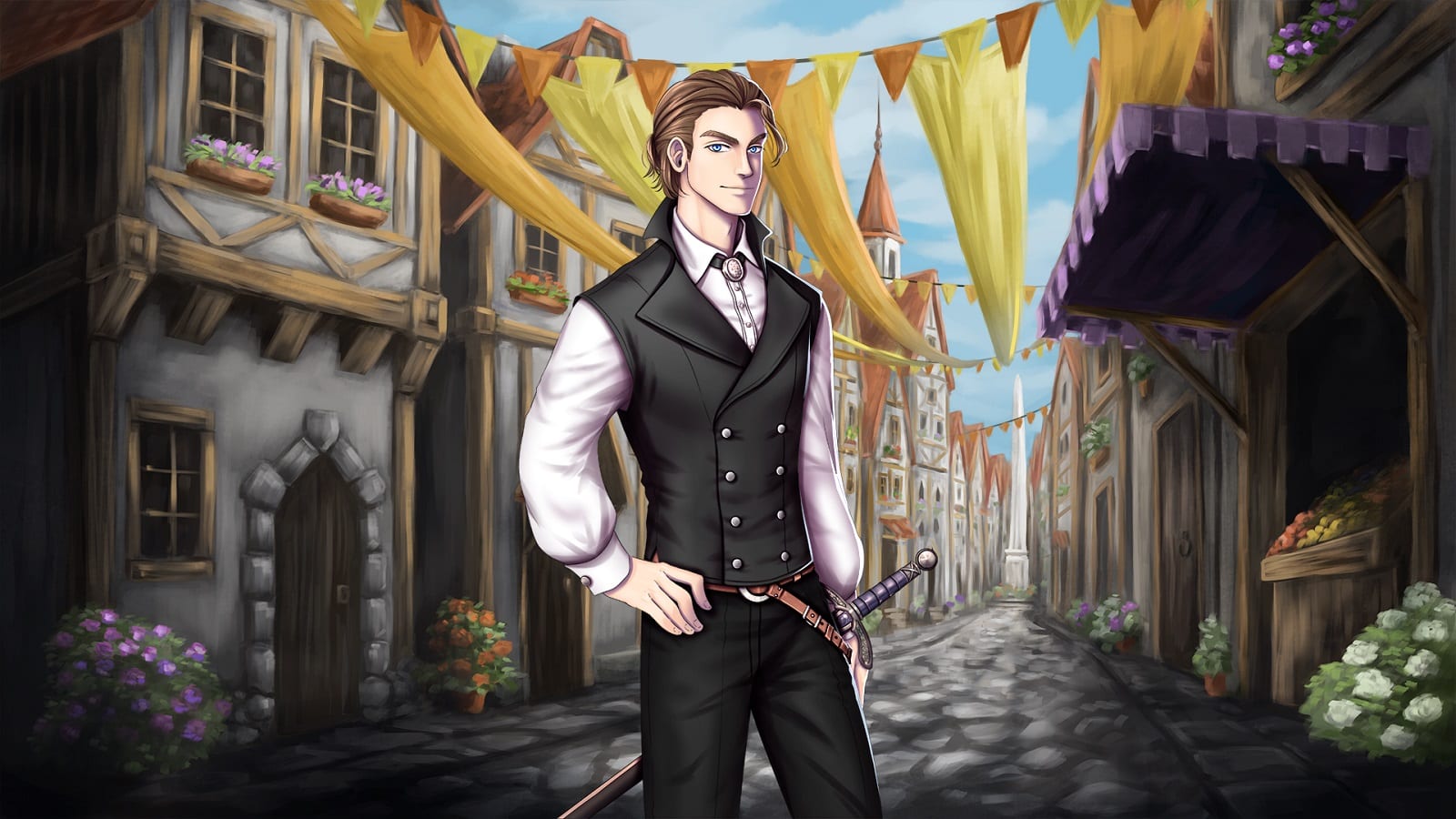 His relationship with his father and with Erlene Rollon, his manner of speech and the way Gerald acts and behaves in difficult situations make him my favorite. There is also some personal empathy for this character.

But while talking about the characters I can’t but mention Walter Wile – the corpulent man in a fancy suit. Almost everyone who has read the script says that he is just the best. Trust me, you will fall in love with him too. 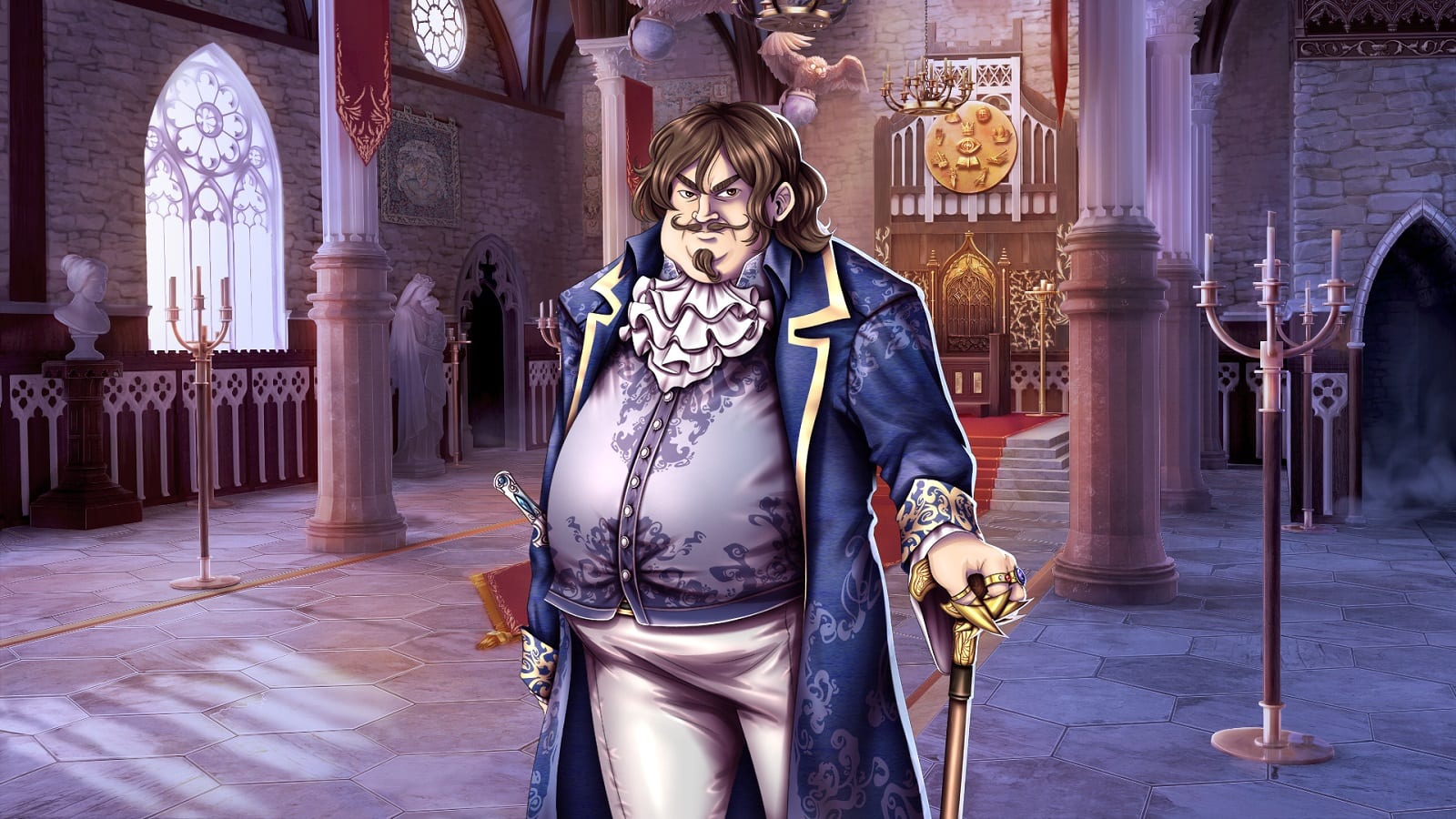 From the looks of it, the visual novel has a lot of concepts that will separate it from other titles in the genre. What are some aspects you want players to check out?

First of all, it’s our own game mechanics and features. I think every great visual novel has them and so we do. Also our “Untale: King of Revinia” has a more serious and realistic style and concept. No fanservice or silly sounds.

There are also some unique gameplay mechanics, which will enhance your immersion into our medieval world:

Also, I want to mention here our event system and the way your choices will affect the game. I am almost proud of how we managed to combine character affliction points and complex choice systems together to create what we have now.

Of note is an in-game combat system, which is something that I don’t see often. Were there any challenges implementing this feature into the game?

So, an interesting question I would say. It’s more about the technical and programming part. As I’m not a programmer, I can’t fully answer the question. But our programmers really faced different challenges. In the beginning, some system was implemented to the chosen game engine (Ren’py), but further down the road, we came to a conclusion that it didn’t fit our goals and was of much worse visual representation than we had expected; we had to redo it ourselves. So, our combat system is an achievement of our programmer.

Besides that, every battle encounter must’ve been thought-out well in terms of the logic of the story. You see, the main character… He isn’t the best fencer in the world. So all the battles with his opponents differ from each other in the level of difficulty. Some of the battles are held under the influence of alcohol or when the protagonist’s mind is blurred because of anger.

Also the prologue (the small part in the beginning of the game) was added because of the need to introduce the combat system to the players. This fact is not about the difficulty of implementing the feature but about the effect it has on the game. 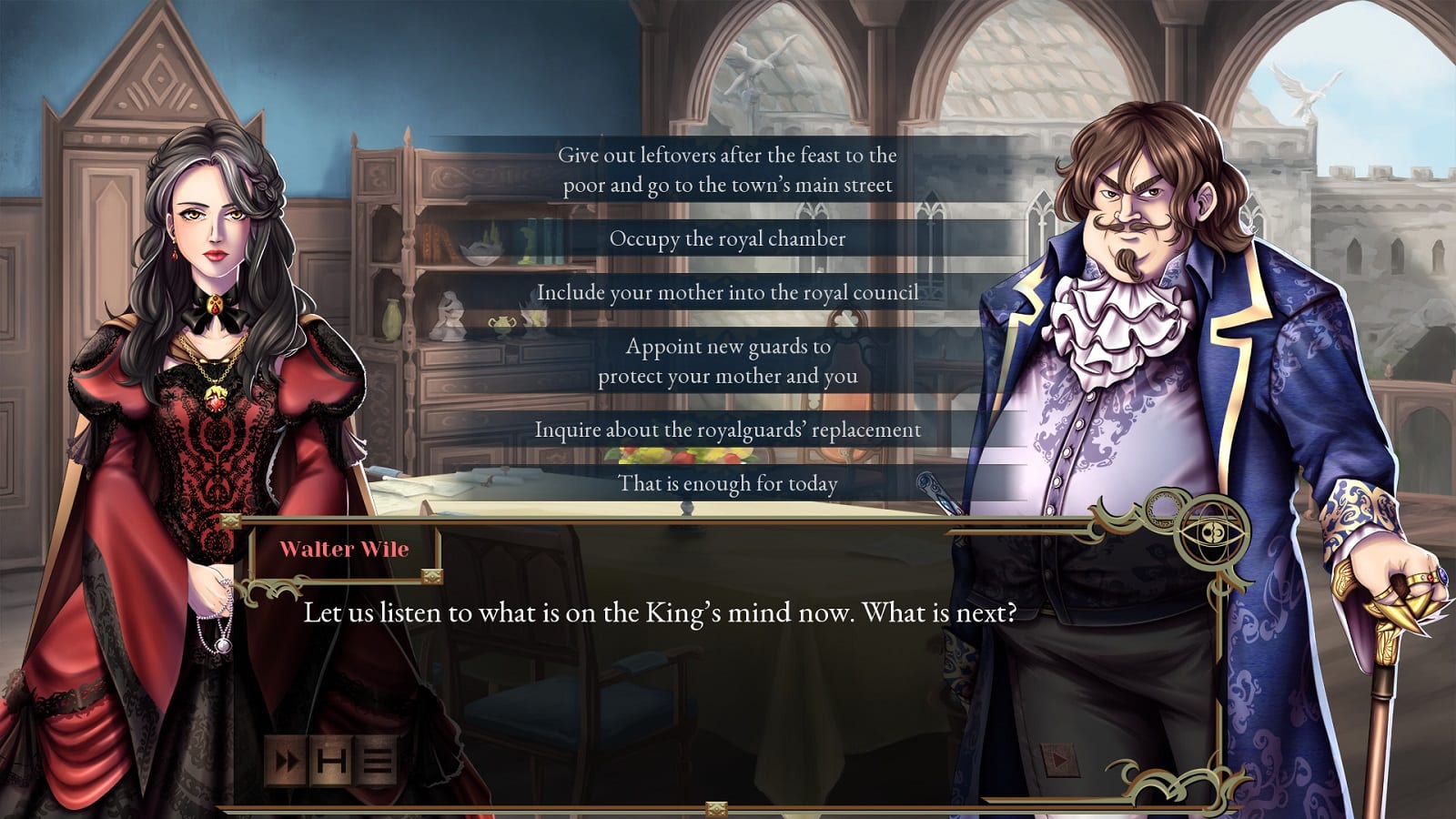 The game aims to be over 40 hours long with multiple endings. What made you decide on the length for the visual novel?

As I mentioned before the script was growing while I was writing it. 40 hours of gameplay appeared by themselves. It’s just the amount of time that is needed to tell the whole story.

While game development does take a lot of time out of your day, I’d imagine you have some free time. What are you currently playing now?

Speaking about my game preferences, I like two types of games in general: hardcore ones and those with a good story. I played every part of “Dark Souls” + “Sekiro” and “Bloodborne”. I absolutely love the “Dragon Age” and “Divinity” series.

And if I to choose among visual novels/interactive stories/graphic adventures my favorite is definitely “Life is Strange”.

For the last couple of months, I hardly used my computer for something else besides working on “Untale: King of Revinia”. But when I did I played “Path of Exile”. It’s the game I played more than any other one. Right now I have time only for checking trade or farm one or two locations just to relax. Maybe to talk about it with my friends as well.

Also, I really want to play “Among Us” but I just can’t find time. This game looks so great but it seems everyone in the world enjoys it but me. It almost drives me mad. Ha-ha-ha! I think after release it’ll be the first game I play with my friends.

Finally, any last words to our readers? Perhaps something we might not know about the game or other pieces of advice?

Even though “Untale: King of Revinia” is soon to be released, I already want to thank everyone who is playing and creating games. Without you, without people who are playing games, the thing my team and I have been working for a long time wouldn’t even exist.

The game will be released on November 6. I hope everyone will enjoy it. And keep an eye on the characters’ actions. Many of them are having motives and intentions you wouldn’t even think of.

If you want to check out more developments as they arrive, check out the game’s Discord and Twitter account. Stay tuned for more news here on Gaming Trend.