Where did the idea of using Thera as a theme come from?

Strategy games about building European cities are… somewhat common, shall we say, but for a good reason! The feeling of building up something from scratch. When I was shopping for an initial theme, I wanted to find a city that hadn’t really been looked at. Some research led me to the 1600 BCE Minoan eruption, and the idea of not just building a city, but rebuilding something you had lost struck a chord with me. A lot of the other mechanics (clearing ash, water being so important, the flexible time limit, etc) came from the research I did about the island and its long history of trade and culture. Even today, Santorini (as it’s called now) is a beautiful island with a lot of incredible sights.

How long have you been working on Thera?

Thera in one form or another has been in my mind for close to 11 years. I started the initial idea while going to college in 2009, and gradually cultivated it into the game you see today. I shopped it’s various forms to a lot of different publishers, even signing with a major publisher before they unfortunately had to go out of business. Then, at a random convention, I got the chance to play Thera with Keith [Blume, L4 Studios] and Sean [Brown, Mr. B Games] who loved the game so much they had to publish it! 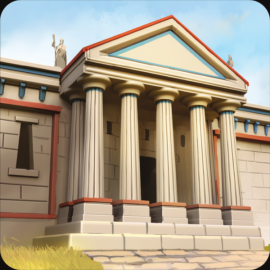 How have the events of last year changed your development of Thera?

The events of last year have been both a blessing and a curse for development. Before last year, we had several physical prototypes, and made sure to get some playtesting in whenever we met people at conventions and the like. With everyone going remote and physical conventions cancelled for the near future, I had to scramble to prototype it in a form that we could play online, but by being able to play almost every week, we were able to make more progress in the last year than we had in a while. I can’t say that online playtesting compares to the feel of watching someone in person enjoy your game, but it sure does help with rapid iteration!

What is the objective for winning Thera?

You start the game with very little – a ruined island covered in ash. Clearing away ash and renovating your old home is the goal of the game, but the buildings that win you the game can only be built by one player. If you’re aiming for a building, make sure you can build it before your opponents do!

Where did the roundel mechanism for incentive roles come from?

Back when I was in college, our gaming group had a clique of players who loved competitively playing German-style games, including Puerto Rico. Every round in Puerto Rico, unused roles are incentivized by adding a coin that is gained when you take that role. It’s a great way to make sure every role is utilized, but oftentimes someone will take a role, not because they need it, but because they want the 3-4 coins that have stacked up on it. I had the idea that the “coins” added could give you additional benefits based on the role they were added to. I also wanted to make most roles available at all times – if someone took the Role you wanted that round, you should be able to take it too! You just might not get as much from it.

Thera has grown into a very different game since that initial idea, but I think you’ll still see the bones of many classical German-style games baked into Theras core! Why did you decide to have resources placed on the player board in specific locations instead of in a shared resource pool?

Strange, isn’t it? Most other games let you collect and spend resources from a personal supply. Why force players to plan ahead and move all their resources around?

One of the most important lessons to understand when playing role selection games is about how much taking a role is going to benefit you versus how much it benefits the people around you. I wanted to make sure that if you glanced at another player’s board you would get an instinctual idea as to how much someone wants a particular role. Do they have resources at an empty location? They probably want to build. Resources at the Port? They want to trade. No resources at all? They’ll need to take Priestess in order to progress.

And as I built that concept out, I found that clearing away ash and building something clean and new feels really good! So as the game matured, the idea that you had to manage where resources need to be was kept and expanded on. Sometimes, good ideas aren’t created, they’re discovered.

What are the differences between the solo game and a regular game?

I wanted the solo version to feel like playing the real game, but offer up some new puzzle elements for players to solve. In the solo game, you’re not competing against other players with their own islands, but Plouteus, a lazy and charismatic rival koretor, who will steal your building plans out from under you and promise the world to the king, even if he can’t deliver. You have a good idea of what Plouteus will try and steal, but a deck of cards that form the core of his AI will let him occasionally surprise you!

What kind of expansions might we see for Thera in the future?

Thera has been in development for a long, long time. The building tiles and effects that are in the core game are only a tiny slice of what we’ve explored. New buildings and effects to expand your strategic options, unique islands and special powers, and so much more!

While the concepts in Thera have been used in other games, I think that the way it’s implemented makes it a unique experience. It’s the kind of innovation you’d expect from a small publisher. Be sure to check out the Kickstarter, which has been funded. The price is a steal compared to the expected cost.