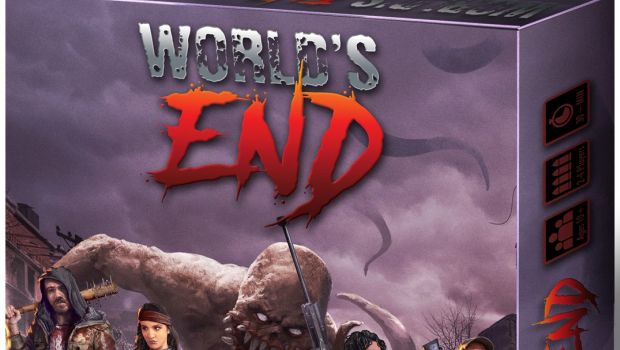 Many games play off of monsters chasing after the protagonists.  Running away from the menace or shooting your way through them are some of the ways to deal with them.  World’s End has everyone trying to escape an apocalyptic invasion, but there are times when you want to look out for yourself.  However, doing that may bite you back later in the game.  To find out more about the gameplay, I asked Stacy Vanorman eight questions about World’s End and its Kickstarter campaign starting March 22.

What influenced you to design a board game?

In the beginning, the apocalypse was upon us… Just kidding, I was like 7 years old, and grew up with my parents always asking us to play card and board games every day. So, good parents, but boring games. We used to make up all kinds of new rules for games we wanted instead of following the norm. Over the years I kept thinking “They should make a game like that.”

As simple as that sounds, it truly isn’t…It would have to:

1. Be easy to understand how to play, and fast to teach others. – (Less than 5 minutes)
2. Have a great theme – (Come on… who doesn’t like the horror genre?)
3. Have great art to look at.
4. Must have lots of decisions to make that directly affect what happens, as if you were really there.
5. Have a different storyline for each player. (No 2 players experience the same journey)
6. Must have enough cards so you will have no idea what they may draw next.
7. Must have a full backstory and good writing.
8. Players would have to interact with each other as if they were really there in this situation as well. Make friends, lie, cheat, steal, risk get robbed, etc.

So, over the years I thought about it. Then one day I had the basics figured out. (It only took me 30 years, so that’s good…)

Why create a monster themed game when there are so many out there?

For the last 12 years we have owned one of the worlds largest haunted attractions so as you might think, monsters are always on our minds. If we were going to design a game, creatures in the mist would be part of it regardless if there are 5, 10, or 100 other monster games out there.

How do you give the players interaction with each other?

Because after the first couple rounds Players are forced to interact with each other for the simple fact there are few supplies. No one can make it through the game without interacting with a number of other players. They may play an assist card and ask for help or play a thief card and just take what they want. Every diction has consequences though.

If you are asked for a favor / help and you don’t assist them, you may be left all alone when help is most needed. You have to make friends to get through, but you may need to cut people off by lying if they are a threat to you.

What makes this more than a “roll and move” game?

This was a HUGE deal while in design. The fact of the matter is there are constant decisions to be made.

1. What direction should I go? (multiple paths to choose from. Some more dangerous than others.)
2. Who do I help along the way?
3. Should I lie to take the lead and risk getting caught?
4. Should I take a “Risk” when it is presented to me for a possible advantage?

Many times, through the game there will be multiple options you have to pick from and because the game is fairly short, every one counts.

What kind of monsters will players encounter?

Well since we are all fans of monsters we wanted to present an atmosphere of “anything can happen”. If you think of the movie “The Mist” where you have no idea what could be around the next corner… That is the angle we took here. We just didn’t want the game to be predictable. There ARE a series of BOSSES. Bosses require everyone to work together to defeat them. Everyone has to play the required card(s) or everyone has to go back 5 spaces as a penalty.

Let’s say a player is 1 roll away from winning. A boss card is drawn. Everyone is required to play cards to defeat it. If player 1 lies and say they don’t have the cards needed, they could set everyone back a bit to give themselves a chance to possibly catch up. Keeping in mind if someone doesn’t have the right card(s) they can ask for assistance WITHOUT an assist card BUT if they ask the right person, who they know doesn’t have the cards either, they could sabotage the whole thing. Keep their cards, AND possibly gain an extra turn. The whole thing revolves around memory as well! Remembering who doesn’t have certain cards or who has extra cards they mentioned at some point in the game will be a life saver since you can only ask one person for an assist! Kind of like “Memory” the game, but in this case, your “life” depends on it. lol

How will the players defeat the monsters?

You will have a number of Supply cards in your hand to start. The number of these cards will go up and down through the game as you use them. Some situations require you to play weapon cards or medical cards to get past it. If you don’t have the cards to make it, you can play an assist card to ask someone for help. If you still can’t get it (because they didn’t have the card, didn’t want to give it to you, or they just plain lied) you must go back to the nearest medical center to heal. (Again, absolute player involvement and interaction as there are a series of decisions that have been made just in this one turn.)

1. Should I just save the assist card because I am only 2 spaces away from the medical center and save if for a better / more important situation?
2. Who do I think will help?
3. Who has the card(s) I need?
4. Does anyone owe me anything for a favor I did for them?
5. Maybe someone has a lot of cards and probably won’t ask me for a favor in return later. This maybe a good player to ask UNLESS he lies a lot in the game… then forget it.

If you take to long you will run into the ABYSS GHOOL. When this card is drawn all is lost… The apocalypse wins. Everyone loses. Game over…

How will the players be competing?

I think a lot of this is answered above but the short answer is everyone could just try and be nice to each other to make it to the end the fastest OR you could all cut each other off at the pass at every opportunity, lie, and steal your way through the game hoping to gain an advantage somewhere… Just like it’s possible in a real-life situation. We’ve seen it get pretty “cut throat” toward the end…

Do you have any other designs in the works?

The game board layout is based on the downtown layout of Alpena, MI with some obvious changes. We have full intention of designing other boards / versions of other cities around the country as time goes on. i.e. a Chicago, or Washington edition for example.

World’s End sounds like an easy to learn experience with a heavy factor of metagaming with the players.  Check out the Kickstarter campaign to see if you’re ready to run.