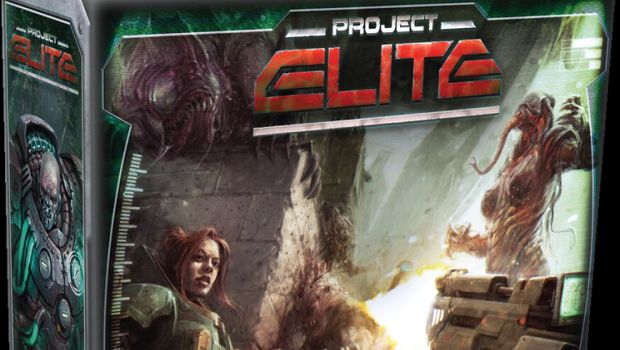 Most of the time when people think of board games, players take turns in order.  However, real-time board games have started to come out where multiple people play their turn at the same time without waiting for a turn or round to end.  While we’ve seen games that continuously move like the dice rollers Escape: Curse of the Temple and FUSE, we’ve seen some hybrid games like XCOM: Enemy Unknown and Flatline where certain segments of the gameplay are real-time, the players get a break between the real-time element to do some housekeeping and get a breather.  Project ELITE follows this hybrid approach and once had a Kickstarter campaign funded successfully but had production issues.  Now CMON has a Kickstarter campaign for a reprint, and I asked Sean Jacquemain eight questions to find out more about the new version.

How closely did CMON work with the original designers of Project: ELITE?

Both Konstantinos Kokkinis and Sotirios Tsantilas were hugely influential in the CMON version of Project: ELITE. They worked hand in hand with the CMON development team to streamline and build on the core game, while adding a number of new elements that are sure to please everyone.

How hard of a sell is a board game with real-time elements?

Any board game with a unique mechanic will have some people who love it and others who aren’t as big of fans. What we love about the time element in Project: ELITE is that it matches the intensity of the theme of the game and works to immerse players into the desperation of the situation.

How many different objectives will be included in the game?

Stay tuned for the Kickstarter to see!

How will the different difficulty levels of the mission change the objective?

The easier missions will serve to teach team members the mechanics and the importance of communication, cooperation, and the ability to adjust a plan when everything goes wrong. As the difficulty increases, players are going to have to become a well-oiled machine, working together in every aspect and getting a little lucky along the way. Hey, no one said saving the world would be easy.

How do the characters of the team play differently?

In the core box of the game, there are six different heroes in Project: ELITE. Each one has an interesting backstory and special abilities. The key will be taking advantage of those abilities under the incredible time pressure. Players will need to work closely together if they are going to win each mission. Using the characters to their full potential is key.

What do the different enemies bring strategically to the game?

There are three different types of Swarms that appear in the game, as well as eight powerful Alien Bosses. The nefarious invaders will make appearances in different missions. While the Swarms have strength in numbers, the Bosses have a much scarier level of attacks and abilities. They will be formidable foes for the members of Project: ELITE.

What improvements have been made from the first edition?

The core game has remained largely the same in terms of mechanics. However, fans will see incredible designs in both the art and miniatures. We are excited about a lot of surprises we’ve added, but you will have to wait until the Kickstarter to see what those are.

Since there are eight rounds of two minutes each and the non-timed phases, how long does a typical game take?

The rounds of Project: ELITE are fast and intense, but in-between each round, the team gets a chance to regroup and make plans for the next mission. This is where the best-laid-plans are made. A full game takes around 60 minutes.

To find out more, be sure to check out the Kickstarter campaign now.