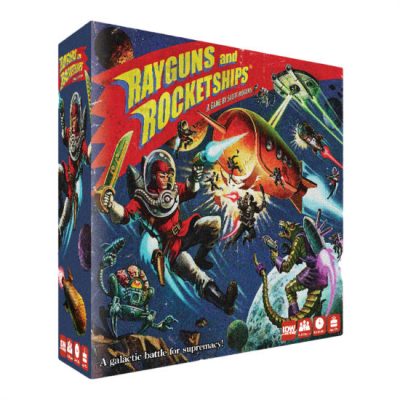 Scott Rogers is a name behind several big games in the video game world.  He’s worked with a number of developers and publishers.  He hasn’t been resting on his laurels though, deciding to go out on his own and develop a unique board game Rayguns and Rocketships.  It will be appearing on Kickstarter on April 19th, and I had the opportunity to ask him eight questions about the game.

What is your background in gaming?

I worked in video games as a designer for over 21 years. I helped create many AAA games for Sony, Capcom, Namco, THQ including God of War, Pac-Man World, Darksiders, Drawn to Life, Warhammer 40K and many more.

What motivated you to move from video games to board games?

I’ve always loved and played tabletop games from an early age. My high school job was working in a Game Keeper (a chain of board game stores) where my boss told me I had to learn how to play every game we sold. When I was working at a video game publisher, I pitched an idea for a third person shooter in a 1930’s sci-fi setting. They didn’t go for it, but I really liked the idea and after wondering how I could make it without a team of programmers and artists, I realized that I could make it as a board game.

Why are you using a retro sci-fi setting for Rayguns and Rocketships?

I love the sci-fi genre and especially space opera which I first discovered after seeing Star Wars. As I looked for more things like it, I discovered Flash Gordon movies, John Carter novels, and Wally Wood comics. It’s a fascinating period of science fiction filled with romance, adventure and lots of weird aliens!

What’s the objective of Rayguns and Rocketships?

Rayguns and Rocketships is a skirmish game – simple to learn but it offers lots of choices for the player. The basic game is to defeat your enemies but players can add additional objectives such as rescuing Princess Persevone of Vaporia (who becomes possibly the best character in the game when she’s freed), mining asteroids and capturing data tapes which may or may not hold the plans for a planet-destroying super-weapon.

How do the star map and ship board correspond with each other?

The players program their movement for the rocketships using command cards while moving their crew around inside the rocketship using action points also generated by the cards. The player can have their crew exit their rocketship into outer space to grab objectives or they can cut their way into the enemy’s rocketship to enter and attack the crew!

There seems to be a lot going on. How do you make all the action manageable?

The dual-scale system of the game is actually very manageable. The action is divided into three phases (rocketship movement, rocketship shooting, crew movement and attack) which makes tracking the action pretty easy.

Absolutely! There are four Planeteer factions in the game: The Astro-Rangers are speedy, the Star-Pirates are shooty, the Zard are experts at close combat and the alien Blaarg! have strange and awful mind-control powers.

Do you have any ideas for expansions should the Kickstarter be successful?

The pulp sci-fi genre is extremely rich and I have several years worth of content designed should the Kickstarter (starting on April 19th) be successful. Please consider backing it!

While the space theme isn’t new, giving it a retro setting is fairly unique, with only Space Cadets: Away Team being one of the few games using this setting.  I’m looking forward to seeing Rayguns and Rocketships.  I know Scott has been working on it for a while, and I’m certain this will be a hit!