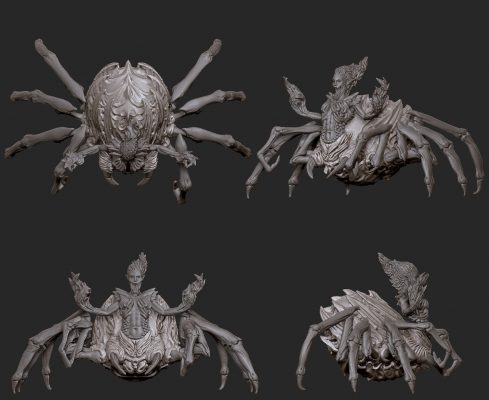 Sandy Petersen has a successful board game with big ideas and even bigger figures.  If you have witnessed Cthulhu Wars in person, then you have seen the incredible size and detail of the playing pieces.  Now he has Glorantha: The Gods War up on Kickstarter.  At first blush the games look similar, but Sandy gives some insight here to what makes them different.

Besides working on games and this Kickstarter, what else have you been up to since the Onslaught Two campaign?

BESIDES working on games?! I guess that would just include hobbies and fun stuff. I went to GenCon and two family reunions this summer (my own and my wife’s), had a new grandson born a few weeks ago, and authored Chaosium’s new Tales of Sandy scenario pack (though I guess that last counts as “working on games”). I also had a bunch of friends over for a bad movie day in February (another planned for November). And I celebrated Lovecraft’s birthday with a day of playing games (Aug. 20).

What is Glorantha all about for those of us unfamiliar with the system?

The bottom line is, there is no such thing as a “generic” fantasy world. Every fantasy universe has to be its own thing. I wanted to do a dark fantasy game based loosely on the Cthulhu Wars system. Instead of inventing a new realm from scratch, I chose to use the old Glorantha setting, which has been around for decades, and spawned RPGs, boardgames, video games (King of Dragon Pass), art, novels, and even comic strips. It’s a mythic setting with a lot of possibilities and rich backdrop, which I thought would be useful for my fantasy game.

How did you get involved with Glorantha?

I bought the first published Glorantha game “White Bear Red Moon” clear back in the 1970s, and became a fan. Later I worked as a designer for Chaosium and spent countless hours honing and developing the setting, trying to adapt it ever-more-usefully for a gaming universe. So in a sense, Glorantha is my “house campaign” though of course the originator Greg Stafford deserves 95% of the credit.

The title “The Gods War” makes this sound like it focuses on conflict. Would you say that’s accurate?

Yep. You cannot win the game by sitting in a corner and constructing a little sandbox empire. You have to get out there and interact with the other players. Of course, sometimes you cooperate, too. And you can certainly achieve many of your goals by means short of (or beyond) physical battle. Let me give you an example from a game I played just last Saturday (on Lovecraft’s birthday). The Chaos player sent a large army of his puniest critters to attack a mighty Sky citadel. He lost the battle, of course, as he knew he would. But he had two of his units killed, and that was his goal – you see, he needed two deaths to bring the Mad God marker up to a value of 10, and he didn’t care who died. In true Chaos manner, he cared nothing for the lives of his minions. Of course the attack also somewhat discombobulated the Sky player, but that was a side bonus. So there was conflict, but it was for a pretty twisted reason. That sort of thing happens all the time in Gods War.

What’s the biggest challenge to balance out asymmetric factions within a game like this?

Ensuring all the factions feel like they are really powerful, and if only they could get their act together, the other factions would be helpless before their might.

If the Gods War campaign goes well I am sure we will do a Gods War Onslaught Two some day. There are lots more things left in the Glorantha setting to explore.

What would you say is the biggest difference between The Gods War and Cthulhu Wars?

Cthulhu Wars feels like a knife-fight in a back alley. You’re rolling around in the dirt, aiming at a kidney, or gouging out an eye. It’s savage and relentless. Gods War is more like a formal duel. There are rules. You can even be polite. But underneath it, you are still trying to kill each other. So the feel is different. My own group of players keeps switching back and forth between which one they prefer. When they have played Cthulhu Wars for a couple of times in a row, they start clamoring for Gods War, and vice versa. So the games scratch different itches, despite the fact that they are both highly asymmetrical strategy tours de force.

Do you foresee yourself continuing to make big games with even bigger figures, or do you think you might design a small card game next?

I do seem to be stuck in a rut don’t I? But really it’s not ALL giant figures. We produced Theomachy this year, which was in fact a card game – like you said. Also Orcs Must Die is coming soon. While it does have 28mm figures, they are not as ginormous as Cthulhu Wars, and it comes in at around half the price. We’re working on another smaller worker-placement game right now which may even have meeples. But my next upcoming game after Gods War is another game with big figures so I’ve not abandoned that either.

If this sounds interesting, then be sure to check out their Kickstarter page.  They are at four times their goal, so there’s no doubt that this will get published.  There’s still three weeks remaining in the campaign to make your decision.