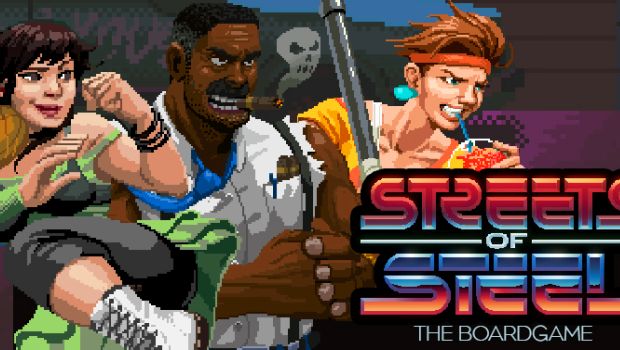 While there have been plenty of board games that have some form of fighting in them, it’s generally in a dungeon crawler or a one on one fighter.  Wild Power Games has created a side-scrolling fighter that mimics games like Final Fight, Golden Axe, and Double Dragon.  To find out more I got a chance to chat with Ryan Lesser to find out more about Streets of Steel currently funding on Kickstarter.

What might gamers be familiar with that you have worked on?

Before Harmonix, I had my own studio and created all of the Shodan art for System Shock 2. While at Harmonix, I was the Creative Director for RockBand 4 Rivals and Amplitude and have also been Art Director and Designer for some of Harmonix’s most popular games, like Guitar Hero, Rockband, The Beatles and others. Matt Moore, my co-designer on Streets Of Steel, was also an Artist and Art Lead at Harmonix.

You have extensive experience in video games. Why design a board game?

Oh, lots of reasons! For one, I spent so much time developing games where players look at a TV, I wanted to start urging them to look at each other! I am also a big fan of multiplayer games. I prefer couch and party games to solo, so tabletop is a natural extension. Finally, Since I can do game design, industrial design and art… I love that boardgames allow me to make a game without the need for huge teams. I can do any aspect of boardgame development myself, though I pretty much always bring in pals to contribute.

Music games are so different compared to side scrolling beat-’em-ups. Why create a board game based on this genre?

Though I love music and music games… a lot… I have other loves as well. I spend decades in arcades through the 80s and 90s and have a deep appreciation for classic arcade machines. One day a couple years ago, I had an idea for how I would want to side-scroll a tabletop game, so I took a crack at it!

What is the objective of Streets of Steel, to be the last player to die?

Strictly speaking, the objective is to kill the Boss. Player characters will die, and be reborn by spending quarters… but really as long as one player is around to defeat the Boss, game over man… game over.

Why include both the miniatures and the pixel standees in the box instead of creating two different versions?

We do have two different versions :)

One is called Purely Pixels and the other has both. When we first devised our Kickstarter plan, I figured I might give people both and let them decide. At conventions and during playtests, there was basically a 50/50 divide between those that wanted Standees vs Minis.

Will there be difficulty settings available like home console versions?

Hahaha, yup! You choose how many quarters to start the game with, and this sets your difficulty. You can also roll your own by using more street tiles, harder Baddies, etc… but the quarters are the main difficulty setting. WIMP is 5 quarters, BADASS is 3, TOTAL BADASS is 2.

Are power ups like weapons and health available or special attacks that drain health to perform?

Both, sorta. There are crates found on the streets, and if a player cracks one open, an Item appears. These are really fun and either trigger immediately or get to be used later at will. A player can also build up their Wild Power meter by either defeating baddies and collecting the bounty, or “taunting”. At any point, Wild Power can be spent to either kick off a Special Power or to force any die to be rerolled.

Do you have a particular game in this genre that stands out to you or has a special place because of the experience you had with it?

The game is influenced by many things, including games. Streets Of Rage, Street Fighter, XMen and King Of Fighters are all big influences.

This brings back memories of the Teenage Mutant Ninja Turtles and other games.  There’s only a couple of days left, so be sure to check out Streets of Steel now.