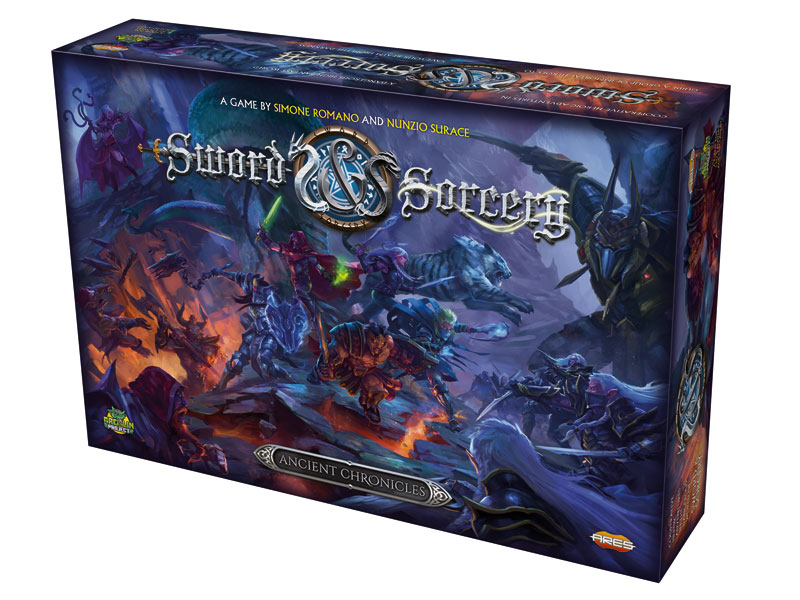 Ares Games had a hit with Galaxy Defenders from Gremlin Project.  It was so successful it came out with two campaign expansions and several other additions.  In late 2015 the Kickstarter campaign for Sword and Sorcery: Immortal Souls found even greater success.  Gremlin Project moved away from the hex-based system and science fiction setting of Galaxy Defenders to a true fantasy setting.  Then recently announced that they were bringing Sword and Sorcery to Kickstarter again, but it wouldn’t be an expansion or reprint of Immortal Souls.  Instead a new campaign set in the distant past called Ancient Chronicles would come.  To find out more about why they went with this direction, I got to ask Roberto di Meglio from Ares Games eight questions.

Were you surprised at how successful Sword and Sorcery was after your Galaxy Defenders campaigns?

“Surprised” may not be the right word. We worked a lot to streamline and improve the system, and fantasy is generally a more popular subject than SF. We really hoped S&S could become more successful than its (worthy!) predecessor.

Why didn’t you use a hex-based system in Sword and Sorcery like the one in Galaxy Defenders?

Hexes do have a lot of advantages from a mechanical point of view, but area movement can bring to a more streamlined system, especially when the artifical intelligence of monsters is concerned. There is also a “cosmetic” element – In the mind of many players, “hexes” are “old school” and areas look more user-friendly.

Why not create a new expansion for Sword and Sorcery instead of an entirely new campaign?

As this is an entirely new campaign, heroes will have to restart from level 1, so it could not be strictly an “expansion” in any case. A new entry point makes it easier for new players to pick up Ancient Chronicles, and existing players will find a minimum of overlapping with their previous sets – essentially, just the dice and the rulebook (which will be improved anyway).

Why create a campaign set in the past of the previous Sword and Sorcery game?

It’s a way to allow players to explore the world of Sword & Sorcery from a different perspective, and to solve some of the mysteries “hidden” in the previous storyline – for example, why was the High Priest Claudius able to resurrect the Heroes?

How will you make the items and characters in Ancient Chronicles feel ancient?

In fact we are about 100 years in the past of Immortal Souls, so it’s not much more “ancient” than that setting. However there are certain elements of the scenery (such as weapons, armors, and architectural style) which we hope will convey properly the feeling we are “in the past”.

Will those who played Immortal Souls see any Easter eggs while playing Ancient Chronicles?

Definitely! But let’s not spoil them…

Was it difficult to make Immortal Souls and all the add-ons compatible with Ancient Chronicles?

Yes and no. We did not change the core rules, so the two seasons are “automatically” compatible. However there are improvements we are doing in the new cycle, and we are making sure they also have an impact in the previous campaign, if players want to do so, and this is a little more tricky – for example, creating “site sheets” describing the towns and cities of Immortal Souls.

Will characters brought over from Immortal Souls need to start at Level 1 again, or can they start the campaign at a higher level?

The campaign will start again at Level 1. You can play with the “old” Heroes, but they will be resurrected again, weaker than before, to face the new quests.

It’s interesting to see them work with a much earlier setting, but it seemed to work well for Knights of the Old Republic.  If you haven’t played Sword and Sorcery and want to check it out, don’t pass up Immortal Souls.  If you’re ready for more though, check out the extras you’ll get in the Kickstarter campaign.