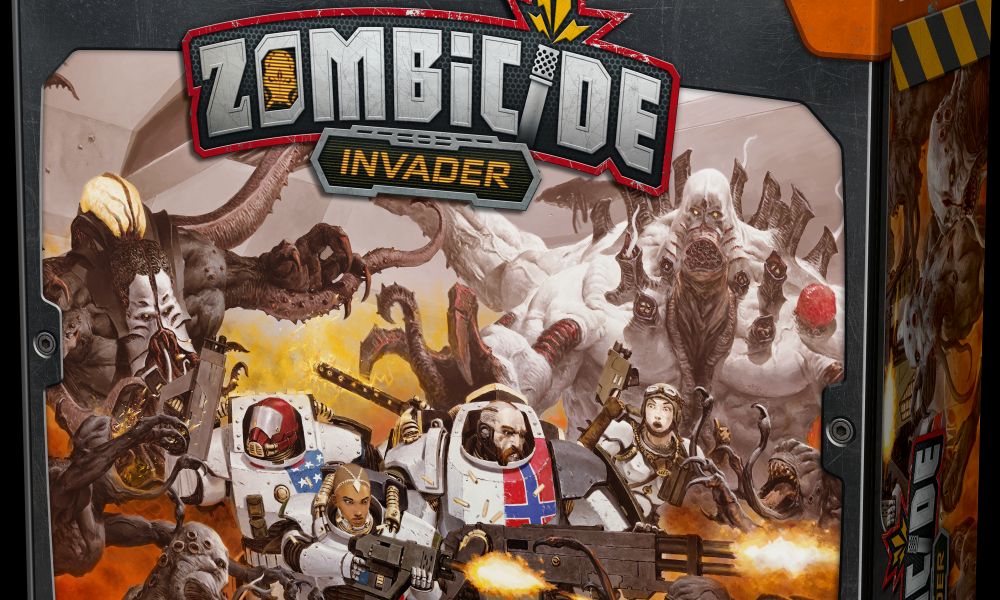 When Kickstarter became available for funding, board game designers flocked to it.  While several board games were successful there, Zombicide became a huge hit on the site and raised over three-quarter of a million dollars, one of the largest amounts to date.  Every Zombicide game since has raised a huge amount of money, with the most recent game in the series, Green Horde, raising over five million dollars.  When I heard that Zombicide was going to go in a sci-fi direction, I wanted to find out more.  Nicolas Raoult, one of the designers of Zombicide: Invader, was gracious enough to answer my eight questions.  You can find it on Kickstarter now.

The Zombicide series went from modern to medieval times.  What makes Zombicide: Invader more than just Zombicide In Space!?

Zombicide is designed like a sandbox. The edition specific rules are like bricks that we can assemble and change as we see fit around a core set of simple rules. In Zombicide: Invader, we changed some core ideas (for example, Fatties – called Tanks in Invader – are placed first in the Targeting Priority Order), and added some new rules as well, including:

The above are only a few of the new aspects of the game.

How much has the design team changed from the original Zombicide to Invader?

The game design team is the same: Raphaël Guiton, Jean-Baptiste Lullien, and myself. We get great support from the CMON team, to make sure the new rules are easy to read and play for everyone. We enjoy working together and have grown a lot as years go by. Graphic designers have changed throughout the series. For Zombicide: Invader, Adrian Smith did all the concept art.

The enemies in Invader look less like zombies and something more from the Cthulhu mythos or the Glorft from Megas XLR.  Why change the look so drastically?

Adrian Smith wanted to create something new and provided the game design team with all the great concepts we see in Invader. A sci-fi setting is the best place to create unusual and unexpected zombies. The Xenos have been infected by a mysterious source. The question is, can our Survivors catch it as well? Until the infection came, humans and Xenos lived their separate lives on the same planet. In the end, who invaded who? Hence the game’s name and design.

Some of the characters available aren’t soldiers but are actually civilians. Will they be using modified tools as weapons similar to Isaac from the Dead Space series?

Providing specific weapons to the different classes would make the game a little more complex to grasp, and we want the core box to be as easy to learn as possible. Civilians may look for equipment in a larger area, while Soldiers offer more resistance thanks to their better armor.

Invader is going to be streamlined compared to other Zombicide games.  What changes are you making to do this and not water down the gameplay?

First of all, we kept the Splitting and Friendly Fire rules from Zombicide: Black Plague as they proved to be rather intuitive. Then, we streamlined the Targeting Priority Order. The game features four Xeno types: Workers (the rank-and- file), Tanks (big bad guys), Hunters (fast and sneaky), as well as the Spoiler Abomination. In previous editions, adding new Zombie types expanded the Targeting Priority Order. In Zombicide: Invader, we did our best to keep the chart as short and clear as possible. Currently, new additions will share Priorities and names with existing Xeno types to avoid confusion.

We then looked at the Equipment cards. Invader’s weapons and items offer the same diversity as previous editions, but with a little more added power. Survivors find potent weapons quickly, enabling them to jump into the action as the danger level rises. Then, we took a look at the Xeno cards and brought a simple yet enjoyable change: each of them features a single Xeno type (Worker, Tank, Hunter, Abomination). The picture is larger and easier to read, so spawning is quicker.

Finally, the setup phase is much quicker to perform. The station has few doors of its own, and most missions feature a limited token amount. This ensures players will be able to jump into the action much faster than in previous editions.

Both, actually. While we kept 9-Zone tiles, they feature a station with small rooms and narrow corridors, and larger exterior areas. Survivors will travel through both to reach the game objectives. Being in the station, or out on the planet’s exterior, has a deep impact on weapon management. In a sci-fi environment, ranged weapons are potent and easier to find, but most of them cannot fire at point-blank range, which is an issue in tight rooms. They also cannot fire in exterior areas. In these cases, the melee specialists may save the day. And the robot may use its weapon in any environment, which can prove useful when providing covering fire while the party moves through exterior zones.

Will you need to be concerned about oxygen levels or not damaging your spacesuit in certain scenarios?

Oxygen is required to go out onto the planet’s surface; however, we don’t get more detailed than that currently. Some missions are still being tested and refined.

Have other settings for Zombicide been discussed?  Sign me up for Steampunk Zombicide!

Other settings have been discussed, yes. They may be developed depending on the players’ reception of Zombicide: Invader!

CMON is looking to build upon the success of their previous Kickstarter projects.  Be sure to check out the Kickstarter campaign today.  If you want to get some of the exclusives, your best bet is to support the Kickstarter or else you might not be able get them.