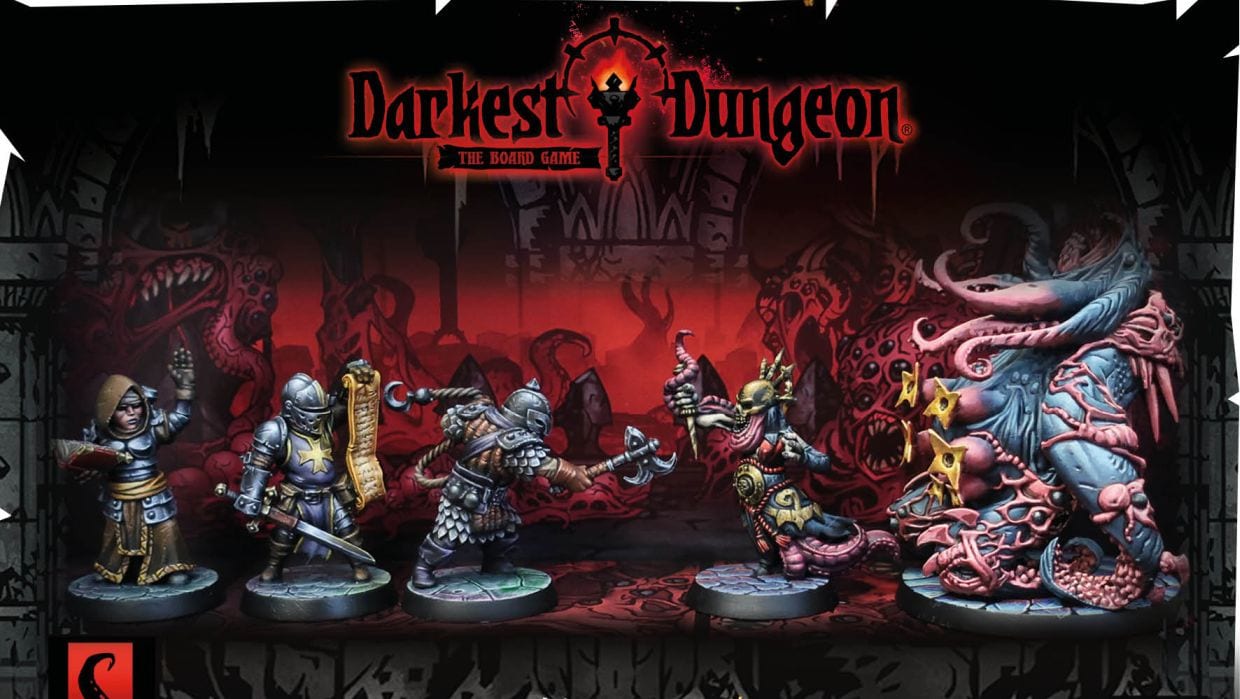 At first glance Darkest Dungeon looks like an RPG with your party on one side and the enemies on the other.  However, once you dig deeper you find out it plays more like a strategy game.  The party made up of hired help contains classes more unique than a typical RPG.  The stress inflicted on your party members needs to be dealt with.  Now Mythic Games is bringing it to the tabletop through a Kickstarter campaign.  I got a chance to ask game designers Nick Niotis and Argyris Poungouras eight questions to find out more about Darkest Dungeon: The Board Game.

For those unfamiliar with Darkest Dungeon, what is the objective of the game?

N – In Darkest Dungeon the players take the roles of adventurers that arrive at a remote hamlet surrounded but otherworldly horrors, and their goal is to help the Lord of this place to revive it to its former glory.

A – Darkest Dungeon the Board Game is the adaptation of the smash hit indy video game by Red Hook. The players take on the roles of adventurers hired by the heir of a mansion and its nearby Hamlet. The heir’s Ancestor has awakened some ancient unspeakable evil that lurked underneath his mansion for centuries, bringing ruin and to the land. The aforementioned adventurers are tasked to venture in the deep darks under the mansion, clear the monsters that lie within and storm the Darkest Dungeon to seal it forever and banish the evil that lies within. As they do that, they bring back lost valuables that will restore the Hamlet to its former glory, making it habitable again.

What makes Darkest Dungeon different from other strategy games?

N – There are many unique things about Darkest Dungeon, two that stand out are: 1 The players are not shiny Heroes that are not affected by the horrors they face, those things have a toll on them, and 2 the “Stance System”, which is a unique system that is the heart of the combat, many things revolve around it, the skills each hero can use, the turn order, the behaviour of the monsters, etc.

A – First off, its unique appeal, brought to life by the talented hand of Chris Bourassa. Then, I would say the whole psychological aspect of the game – the stress and affliction system. As heroes traverse the twisted dungeons, the horrors they meet have various effects on their psyche. The tactical combat that plays on two fields: stances and positioning is also quite unique. Finally I believe the exploration is something that stands out. You don’t have modular tiles that make up the dungeon, rather you have a “minimap” where you explore and you have handcrafted combat battle rooms when combat occurs.

How do you choose the members of your party?

N – Players can choose any 4 Heroes from the ones they have available, but they need to do this as a team because each Hero will have a specific role in the team. So they must build a team that has strong synergies if they want to succeed.

A – Basically, each player can go with whatever they like, although a “balanced” party will have more chances of survival. Each hero has a roster of 7 skills and each time players enter a dungeon they pick 3 of them (this increases as they level up, to a maximum of 5). If one has knowledge of the video game, they can definitely bring it in the board game! So if someone likes to play the Vestal in a particular way, they can do here too – they should expect it’ll work the same way! That said, we’ll include proposed hero and party setups for people who are unfamiliar with the video game and want an easy/quick start.

How do you simulate the stress mechanism for the party?

A – So, as the heroes explore and fight in the dungeons things will start to stress them up. From traps, to specific monster attacks to suffering or even witnessing a critical hit upon a companion etc. Each hero has a Stress meter that goes up as these things happen and when it reaches 10, their resolve is tested. At that point the player will have to roll to see whether their hero becomes Virtuous or Afflicted (more chances for the latter). This will give the hero a temporary boon or bane for the remainder of the dungeon that will affect the rest of the party too. When this occurs, the Stress meter will reset to 0. If at any point during this dungeon run Stress reaches 10 again (and the hero is already Virtuous or Afflicted), the hero dies of a heart attack! Of course, as there are ways to get stressed, there are also ways to recover stress. 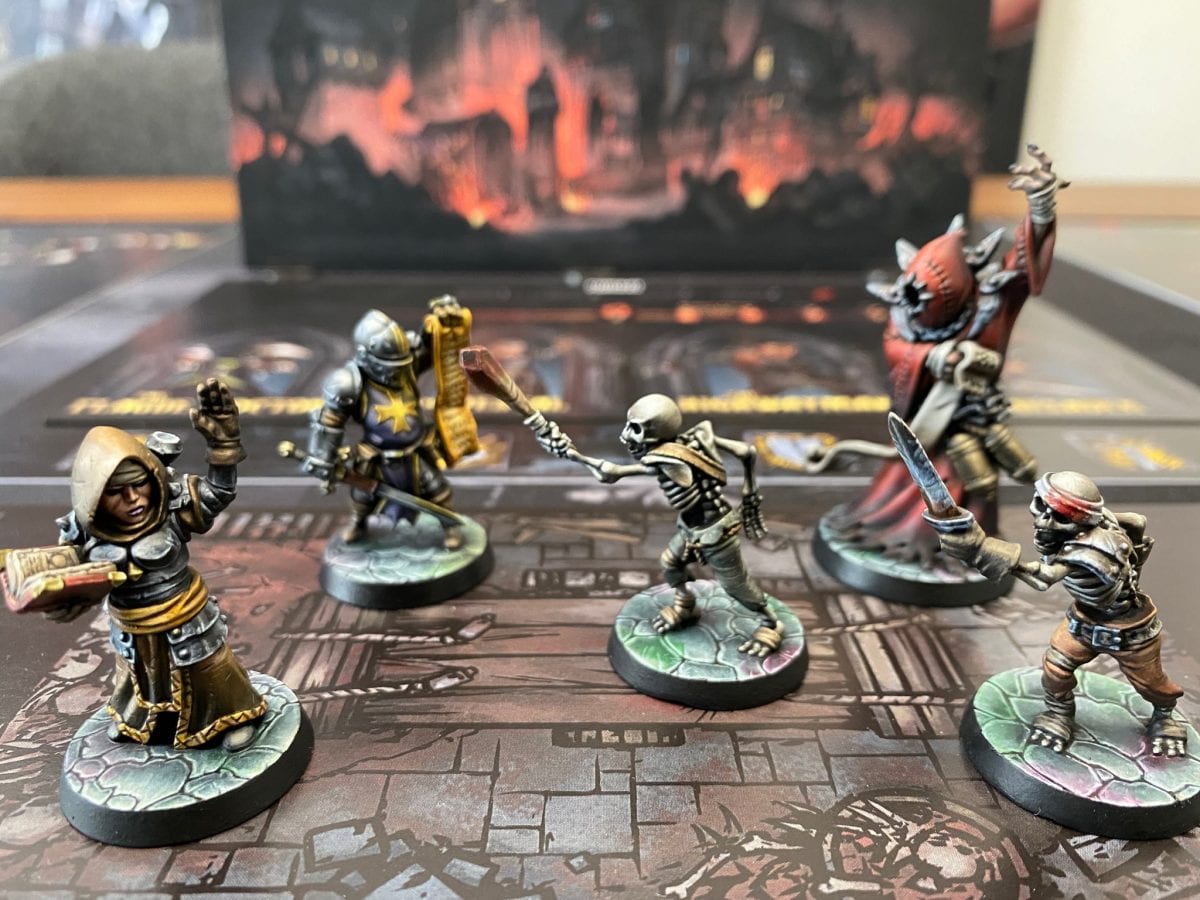 How does the town come into play?

N – Between missions the players will come back to the Hamlet, this is a very important part of the campaign because this is the time for the Heroes to rest and recover stress and heal, train and strengthen their skills and characters, etc. They will also help in rebuilding the Hamlet by improving buildings. This is something that will help them during their adventures.

A – So the town, called the Hamlet, is the place where heroes come and relax after a stressful dungeon expedition (should they be alive, of course!). During their time in the Hamlet they can visit it’s various locations to recover stress, wounds, quirks, diseases, level up etc. They can also spend coin to upgrade these locations so they offer better services! They don’t have much time though, at the moment they arrive to the Hamlet an event occurs that will also determine how many days of preparation they have till their next expedition. The more favorable the event, the fewer the preparation days.

Will Darkest Dungeon have a Legacy element to it, or will it comprise of individual scenarios?

N – No Darkest Dungeon doesn’t have a Legacy element, but the game has a lot of replayability, so every time you start a new campaign you will have a very different and unique experience.

A – DD is a campaign game, though it is not a legacy game. It is designed around replayability. Players can finish it multiple times and because of the huge variety of (balanced) randomization in its quest and dungeon generation and hero combinations, chances are they’ll never have the exact same experience twice. There is also a campaign failure! You’re guaranteed that you’ll finish the campaign – but this is ok, as, as I said, it is designed in a way that players can start over and play differently. 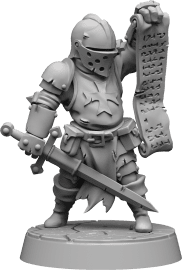 How will you handle trinkets and other items in the board game?

N – Trinkets are a very important aspect of the video game and the same goes for the board game.

The Main difference is that in the Board Game trinkets don’t have passive bonuses and penalties but are active instead. In this way the players don’t need to have them in mind at all times, and it also adds some interesting choices for the players. Of Course, we have kept the spirit of the game, nothing is purely good or bad, so when you use the positive effect of a trinket then you must use its negative one in order to turn it back to its positive side.

A – Trinkets are in the game, as equippable items of course. So how Trinkets work is a bit different than the video game. First, heroes have a trinket limitation equal to their level. So a level 1 hero can equip only 1 Trinket etc. Now, Trinkets have two “sides”. A good one and a bad one. So, players will choose when to use their trinkets – they don’t have passive abilities. When they do so (to gain a powerful boon like increased critical or additional condition effects) they turn it to its “bad” side. Now they have to trigger it sometime and suffer the bad effect in order to turn it back to its good side again. So basically they have this duality that they also have in the video game, that they give something good and something bad, but they are triggered by the players when they think the time is right. Trinkets are found in the dungeons and they vary in power (depending on the level of the Campaign) and can also be bought and sold at the Nomad Wagon in the Hamlet.

The video game is notoriously difficult. How are you going to keep the board game fun while keeping the difficulty high, or will you have multiple difficulty levels to make it more accessible to new players?

N – No we don’t have multiple difficulty levels because we wanted to have a tailor made experience.

A – Personally I find the video game difficult when you first start playing but from the point that you know how things work and on, it becomes just challenging.

To your question, DD the BG is a challenging game, though I believe it is more forgiving than the video game. That had to happen because you don’t have the chance of infinite grinding that the video game has. Your heroes are limited and your missions are limited too. Bad stuff WILL happen to you, you can’t get around that, but actual death should be more scarce. Expect to lose some heroes in your way, though and if you mismanage maybe you’ll lose a campaign too. We don’t have difficulty levels – the game gets gradually more challenging. 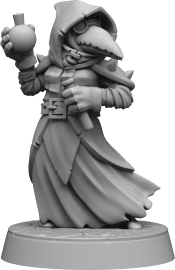 Dark Souls is another game known for its difficulty level that got translated to a board game.  However, the punishing difficulty of Dark Souls: The Board Game turned off gamers due to the fact that it felt like it was almost impossible to make any progress.  It sounds like the designers of Darkest Dungeon: The Board Game are doing what they can to make it challenging without being frustrating.  The Kickstarter campaign has already achieved their goal and is unlocking stretch goals.  If you’re a fan of the video game, be sure to check out the board game.