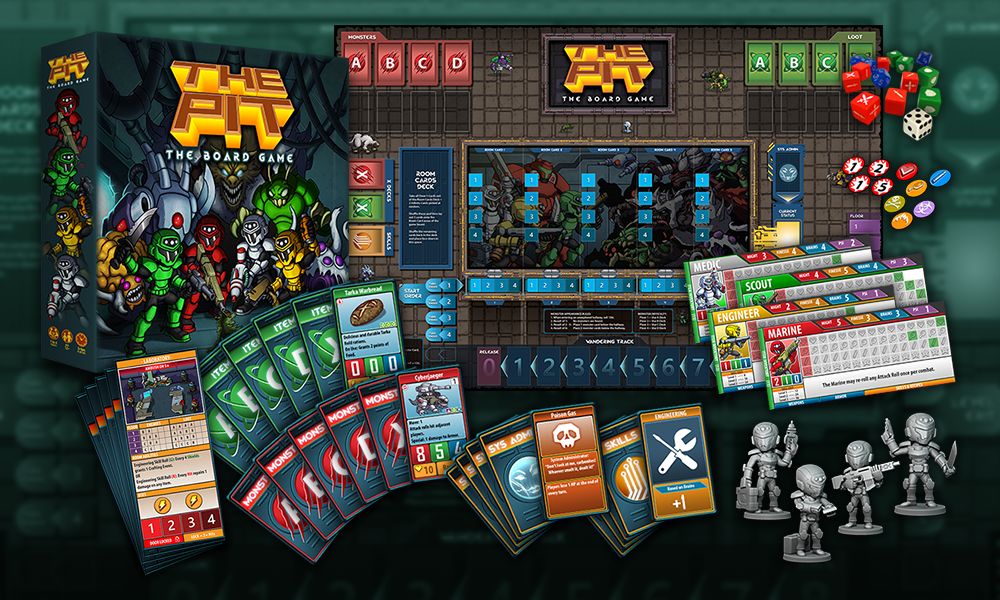 It’s not unusual for board game companies to get different licenses to enhance the theme of the game.  Computer games like Fallout, Doom, and Sid Meier’s Civilization have been brought to the tabletop by Fantasy Flight.  However, you don’t see many computer game companies creating their own board games.  Kerberos Productions is taking Sword of the Stars and making several games in that universe.  The first one, The Pit: The Board Game, is currently funding on Kickstarter.  I was able to ask Martin Cirulis eight questions about their dive into the tabletop realm.

What made Kerberos decide to venture into the board games?

It was a natural step for us. Most of the team are big board-gamers and we often had gaming nights where we would joke about how this game or that one would be translated into the SotSverse. There were a lot of laughs over it. (My favorite ideas were things like SotS: Sushi Chef!)

Fast forward to a couple years ago: I realized that we had gotten into a work cycle on Computer Games where the team had spare time in Design and Art, while programming was running at full production.

After a few minutes of staring at my wall of board games and pondering how I could make myself more useful to the company, a light went off in my head. And here we are, kickstarting a co-op dungeon crawler!

What makes the Sword of the Stars universe unique?

There are a number of things that make SotS unique. The franchise has been in continuous development for over fourteen years, expanding over dozens of computer game releases, multiple game genres, and into print media—there is a military SF novel and a Lore Book in the franchise that runs over 440 pages of concept art and fiction. The Sword of the Stars universe covers three different stand-alone strategy games, multiple game sound tracks, as well as a single-player rpg. At this point we have such a huge catalog of art and ideas to work with that moving into other media, like tabletop games, is much easier for us than it might be for a brand new franchise.

Throughout the life of the universe, Sword of the Stars has grown through the contributions of many fantastic concept artists and 3D modelers, including Ken Lee, Chris Gerspacher, Ryan Blanks, John Yakimow and many more. Sword of the Stars also has the benefit of a great Lead Writer and Narrative Director, Arinn Dembo. She has created compelling background fiction and characters for years, and done a ton of heavy lifting in designing the narrative arcs and faction design for Sword of the Stars. I don’t think there is a better world-builder alive today in any medium—and if there was, I’d hire her.

It seems like The Pit: The Board Game could have been created as a typical dungeon crawler. How did you come up with the unique system used in The Pit?

As a designer, few words make me grumpier than “typical” when referring to my work! I knew from the start I wanted to come at things from a fresh angle.

The only problem was that every time I tried to combine literal floor layout systems with anything fresh, I ended up with a big slow architecture simulator! So instead I regrouped. and tried to see what the stress beats were in the video game that were just hiding behind the map.

From there it was straightforward to abstract the floors into something very approachable to the players and preserve that precious feeling of the game trying to kill you. That was the dynamic that made the computer game famous.

How do you make the game feel different each time when most of the game seems to be going down a hallway and exploring rooms?

We achieved that with the sheer variety of rooms, monsters and items you can find. The basic pattern of movement and exploration is simple, each room evolves in term of threat/reward depending on what floor you’re on when you find it. And every time you flip up a monster from any deck, you are always on edge about whether it will be a threat you can deal with…or one that will push you beyond your limits.

The goal in The Pit was to always keep the tension levels high every time a player has to reveal anything, and I think of you watch some of the gameplay videos or the player testimonials, I think you can see we have achieved that.

The Fate dice sound like they affect combat differently for each character. What are some examples of what they do?

Every Player Character has a Special Ability, and the majority of Special Abilities depend on rolling Fate Dice. The only exception to that rule is the Marine—his Special Ability is to re-roll all of his Attack dice once per combat!

To give some examples: when the Medic rolls her Fate Dice, she is able to heal herself or her team mates—she can restore hit points or chase away harmful conditions, like Poison, Radiation or Disease. When the Engineer rolls his Fate Dice, he can use his magnificent brain to buy a new Skill card for free, instead of having to spend his monster trophies to acquire it. And when the Scout rolls Fate, she can use her keen senses and training to reveal any monsters that are hiding in Ambush in a new room.

The Fate Dice system also really shines in helping to make Weapons and Monsters unique. My favorite example of this would be the starting equipment of the Medic: she begins with the Transfuser Gun for her ranged attacks and a Shock Baton for her melee weapon. They both have two Attack Dice and 1 Fate, but when you roll the Fate Dice with the Transfuser you steal a hit point from your organic enemies and add it to your own health. With the Shock Baton, that successful fate Roll would stun your organic opponent, or add an extra damage when hitting a robot!

This system creates massive variety with a very straightforward system. All you have to do is read the Special entry on the weapon or monster card in front of you—you never have to look anything up.

The Kickstarter campaign indicates a game takes more than three hours. Will you have a way to save the state of the game at a certain point so you can stop part way through and then finish another time?

Absolutely. The Pit Board Game was designed to be very re-start friendly. Literally all you need to do is take one phone camera shot of the board, if you stop in the middle of exploring a Floor, and one photo of the Player Cards with their equipment and status markers (where you were in terms of health, food, bullets and damage/charges on items). Once you have that info, you can put the entire game away and set it up again any time without losing any progress.

You can also use this ease of set-up as a quick start position, or a way to explore scenarios. Find out if you could have won a game from a tense middle position, or re-start a new random order from before someone died. If we are feeling tense, or there is an ambitious gamer cat around, we often take a pic at the start of every new floor!

Why include the 3D print files when you are including miniatures with the game?

We see a future where a lot of players will have easy access to 3-D printing devices, either in their own home or a shop down the block. Instead of fighting the future, we think game developers should embrace it.

We are more than happy to work within the traditional model, and ship boxes of cool figs to the store for players who want to browse and shop for minis. But we are also just as happy to “sell” players the ability to print out our figures on their own hardware.

How many times have you broken or lost a figurine and thought “Man! Now I have to do without or buy a box of mostly redundant figs to get the one I am missing”? For The Pit and any future games that use miniatures, we would prefer to offer the plans and let our players make as many as they want or need.

Is there a possibility of an expansion with new characters, enemies, and rooms?

Absolutely! The original video game went through many expansions which incorporated new Player Characters, enemies, locations and mechanics. In the current Osmium Edition of the game you can play a variety of alien heroes, as well as human characters who have Psionic abilities. And the video game also features entire floors and sublevels which are Biomes, like desert or snow—climate-controlled environments where special creatures were kept.

All of that content is available to us to enhance The Pit Board Game, both in this campaign and in the future. Our current campaign Stretch Goals already incorporate playable alien characters, monster minis, and Final Floor Teams (boss monsters that you defeat to win the game). The more support we have through crowdfunding, the faster we can move forward to make this board game all it can be.

You can check out The Pit: The Board Game on Kickstarter now.  There’s still over two weeks left to get in on the action.  Kerberos will also be at Origins 2018, so be sure to check out the game there.