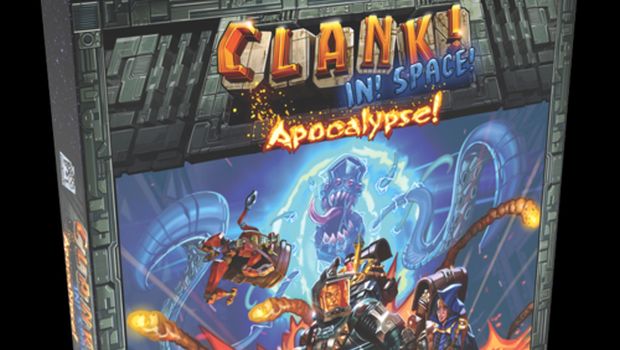 Last year Renegade Game Studios was able to surprise almost everyone at Gen Con when they released Clank! In! Space!, a sci-fi spinoff of the original Clank!  While Clank! has already received two expansions, we haven’t seen anything for the sequel.  That wait will be ending soon, as the Apocalypse is coming.

Renegade Game Studios™ and Dire Wolf Digital are excited to announce the first expansion to last year’s Gen Con break-out hit, Clank! In! Space!. Releasing just one year after the base game, Clank! In! Space! Apocalypse! will be available to play or purchase at Gen Con 2018 or at your local game store in August.

The deck-building adventure of Clank! In! Space! continues. Small pockets of resistance continue to oppose Lord Eradikus, but the evil cyborg now plots to wipe them out with one grand and wicked scheme!

Thwart the efforts of Lord Eradikus!
Reap the rewards of noble (and sometimes reluctant) heroism!
Save the galaxy…. And get rich in the process!

Maybe you can avert the Apocalypse!  (Or at least escape with the treasure while someone else does!)

If you want to dig into the Apocalypse, be sure to pre-order and pick up your game at Gen Con.