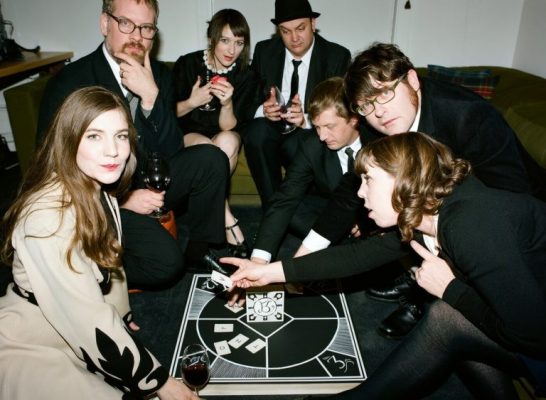 You may recognize Keith Baker as the creator of the Gloom card game and the Eberron setting for Dungeons and Dragons.  So how does a designer get together with a band and create a new card game with funding on Kickstarter?  I was fortunate enough to ask Keith Baker about his unlikely partnership with The Decemberist for the Illimat Kickstarter and a few other topics.

The collaboration with a game designer and a music group seems unlikely. How did it come about?

As it turns out, The Decemberists play a lot of tabletop games on the road. One of the games they play is Gloom, and over the last year I got to know guitarist Chris Funk over Gloom. He mentioned that they had this intriguing board they’d made for a photoshoot – something that looked like a mysterious game, but had no game attached to it. Would I be interested in designing a game to go with it? They wanted something that felt like it belonged in the world of The Decemberists without being specifically about The Decemberists, and they wanted a game that felt as though it could potentially be a hundred years old and just forgotten… a game you might find in a dark corner of your attic.

How was this collaboration different from other designs you may have done?

Every game starts with a challenge. In designing Gloom, I was looking at a transparent playing card and said “What can I make with this?” Illimat simply had more variables to work with. There’s four fields on the board – what’s the significance of a field? What about the secondary box that since in the center of the board? It was a wonderful challenge. Beyond that, it’s been a close collaboration with The Decemberists, especially Colin Meloy, Chris Funk, and Carson Ellis. They are deeply invested in the game. Carson’s art is a driving force behind the design, and I’ve had a lot of discussions with Colin that have helped refine and expand the mechanics.

What is the object of Illimat?

Illimat has the general flavor of a classic card game. The goal is to get the most points, something you do by collecting cards and clearing fields. There are a number of secondary goals; you get points if you end with the most Summer cards, but lose points if you end up with the most Winter cards. It’s the sort of gameplay that will feel familiar to anyone who’s ever played Hearts or Gin, though the actual mechanics are closer to Cassino or Scopa.

The cards almost look like a typical 52-card deck, but you use a 65-card deck instead. How is the deck put together?

The deck contains five suits that range in value from 1-14, with one card (the Fool) being worth either 1 or 14. The primary suits are tied to the seasons – Spring, Summer, Autumn, Winter – with the fifth suit of Stars being added when you play with four players. In addition to this, the game has eight additional cards: the Luminaries. These are tarot-sized cards that aren’t mixed in with the rest of the deck. They are dealt into the corners of the board, and revealed when a field is cleared. The Luminaries are a dynamic element that brings a lot of replay value to the game, as well as providing a deeper sense of story.

Why use the cloth mat for a card game?

Illimat has a striking board design. Making it a cloth board preserves that design while allowing it to fold up and fit inside the central box – so it has a very small footprint on your shelf despite the large footprint while it’s in play. It proved harder than we anticipated to produce the cloth boards – it’s considerably more expensive than working with cardstock – but I’m very happy with the impact it has on the fell of the game.

What do the seasons in the game represent?

Remember how I said that the board is divided into four quadrants? These reflect the four seasons, and the seasons determine the actions that can be taken in each field. You can’t sow (discard) into the Autumn field, while you can’t harvest (collect) cards from the Winter field. But the seasons aren’t static; they’re set by the position of the illimat, the box that sits at the middle of the board. Any time you play a face card, the illimat turns to match the card you played; so when you play the Knight of Winter, it becomes Winter in that field. This is the most dynamic element of the game and a crucial part of strategy; you can switch the seasons to foil an opponent’s plan, or build up a hoard in the Winter field that you can pounce on as soon as the seasons change.

While Wizards released an update to Eberron for the fifth edition, is there a possibility of seeing a campaign in your setting?

I believe that there is; I think it’s just a matter of time. Wizards has already delved into Ravenloft, and I think that they will eventually return to Eberron. There are many things I’d love to write for Eberron when time allows. In the meantime, this is why I created my new RPG, Phoenix: Dawn Command – to have a world I can explore as deeply as time allows. At the moment all my time is focused on Illimat, but after the Kickstarter I have a lot of plans for Phoenix. If you’re not familiar with Phoenix: Dawn Command, you can find out more (and order the game) at Twogetherstudios.com .

What I love about Illimat is that it feels familiar – a flashback to playing classic card games when I was younger. This makes it accessible to a wide audience; it’s the first game I’ve made that I can play with my father. At the same time, the turning of the seasons and the interaction of the Luminaries adds a dynamic and unpredictable element, something that can make every hand feel unique.

Aside from that, I’ve got my hands full with Phoenix: Dawn Command. I’ve got a few other projects lined up for 2017, and Atlas has just announced Gloom in Space – but right now, I’m focused on bring Illimat into the world.

It looks like Keith has a lot on his plate, but he has definitely given Illimat interesting choices to give it plenty of replayability.  You still have time to check out the Illimat Kickstarter, so go on over and take a look.