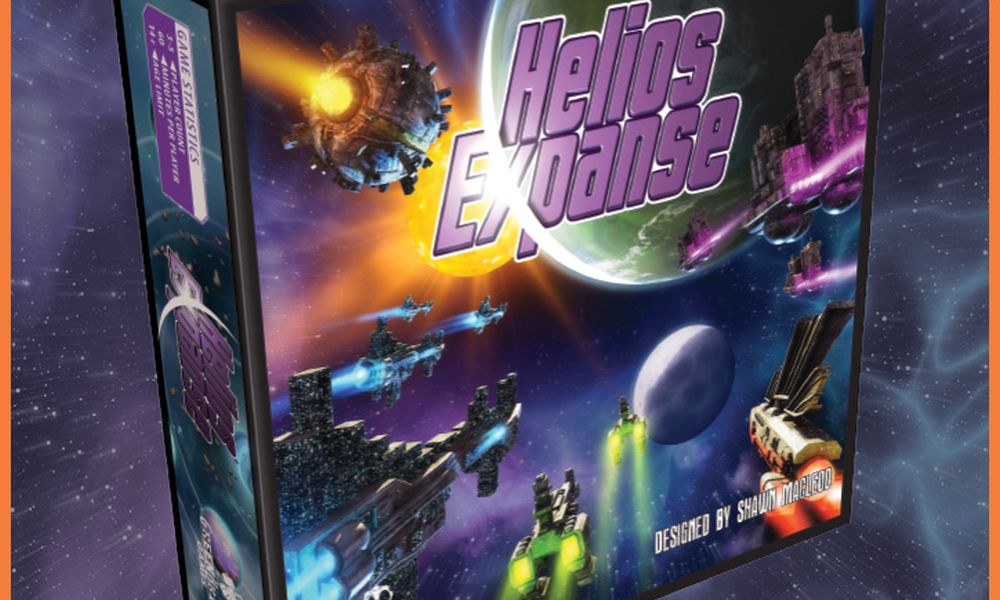 It seems like typical 4X games are huge endeavors that last for hours with diplomacy, politics, and combat mixed together in an elaborate set of rules.  Twilight Imperium and Eclipse are a couple of games that define the genre.  When Greenbrier Games announced Helios Expanse, I was skeptical of its promises of a 4X game in about an hour.  To find out more about this Kickstarter, I asked Julie Ahern from Greenbrier Games eight questions.

What experience do you have in the board game industry?

​For this particular game, I am the developer. I was part of the design team that created Zpocalypse and Zpocalypse 2: Defend the Burbs, I have been the lead creative writer for Yashima, Heavy Steam, and Dragon Tides, and worked extensively on Folklore the Affliction. In my life before Greenbrier Games, I designed games for elementary schools that ranged from teaching primary grade students map reading skills, to an Oregon Trail tabletop RPG, and an Ellis Island LARP.​

What influenced you to get into board gaming?

Board games have been part of my life since I revised the rules of Candyland for my sister, so she wouldn’t be bored with it. I was five and she was three. In truth, we played a lot of card games when I was younger, and it wasn’t until the magical moment in sixth grade, when I discovered D&D that I realized what I’d been missing. In my masters program for education, my thesis was about how to incorporate more of the multiple intelligences, especially kinesthetic learning into the classroom and a primary tool I focused on was using games. My classroom was filled with board games, RPGs, and LARPs for math, science, language arts, and social studies. Which of course meant at some point someone was going to ask me to look at their game design. It just happened to be Jeff with a game about a zombie apocalypse, and here we are today.

What is the objective of Helios Expanse?

​Helios Expanse is a quick playing 4X game, (eXplore, eXpand, eXploit, and eXterminate). In the game, you are trying to move around the board to colonize as many planets in the different sectors as possible, while taking the least amount of damage from your competitors. ​

What makes it different from other 4X games?

​There are a few key elements that make this game wonderfully unique while still keeping the feel of a 4X game. The first is the pacing​: when we say under an hour, we mean it. However, the timing doesn’t feel rushed- there is no real-time requirements. It is simply that you must put down your programmed card from your hand in the Mission Planning Phase of the game, and then complete those cards actions (if able) during Mission Operations. The second is the programming deck (called the compiler stack) itself. While you have set actions to complete, the cards are open enough that there is still choice. Movement doesn’t specify which direction, for example. And when invading, you have as many choices as you have Colony Cubes on the board.

There seems to be a lot of cards in Helios Expanse. What exactly do they all do?

​I’m so glad you asked! The Action Cards are the foundation of what you will play in the game, and I will give you the rundown on them first.

Maneuver is used to move around the solar systems. Deploy starts as a movement card, but once you level up in Technology (with the Research Card), it allows you to move and colonize unoccupied planets. If you haven’t achieved that level, you can use a Terraform Card to add a Colony Cube instead.

Blast Cards allow a spaceship to attack another spaceship. Once you level up in Military (using your Training Card) you can even Blast from any of you colonies at a targeted spaceship, which pushes that targeted spaceship away, and gives them a Damage Card. The Aggression Card starts as a movement card as well, but levels up to allow spaceships to broadside, or push, an enemy away. Finally, the Invasion Card allows a player’s colony on one planet to remove an adjacent Colony Cube, and replace it with one of their own. As players level up in Military and Technology, even more abilities become available to them.

The Subterfuge Cards, Ruse and Recon, are used differently. Instead of playing these to the compiler stack, Ruse is used to play a card face down, to hide the players’ intentions. Recon is used to allow the player to draw three additional cards that turn, and forgo playing a card to the compiler deck.

You have factions included in the game. How do they make the play different each time?

Since all the player’s action cards are the same, a faction is what gives unique and asymetrical abilities. For example, Ceres can take a peek at any face down card placed during the Mission Planning Phase, but Ganymede can play their Ruse Card in place of an Action Card, and then replace it with any card in their Hand during Mission Operations Phase. Another example is that the Titans can use the Blast card on all spaceships in range, or double the range on one targeted spaceship, but the Sorority can use their Invasion Card to add two levels to their Military Strength while defending. In addition, while the game is for 3-5 players, there are 10 Factions to choose from so that there is a variety of play style.

How will each game be different when the starting board looks the same for each player count?

While the cards and layout of the board will make this game easy to pick up for both a new and seasoned player, whether you decide to level up in abilities first, or start grabbing planets, your faction’s abilities, and the player interaction itself will make this a game that is varied and engaging each time.

Is there a possibility of more maps and more factions in the future?

Of course there is that possibility! There are a few action cards that also may have different choices that change the game play as well.

You don’t have long to get in on the Kickstarter campaign, but I’m certain it will be available on retail shelves eventually.  If you ever wanted to get into a 4X game but didn’t want to sink a weekend into a single game, than Helios Expanse might be a great way to test the waters.