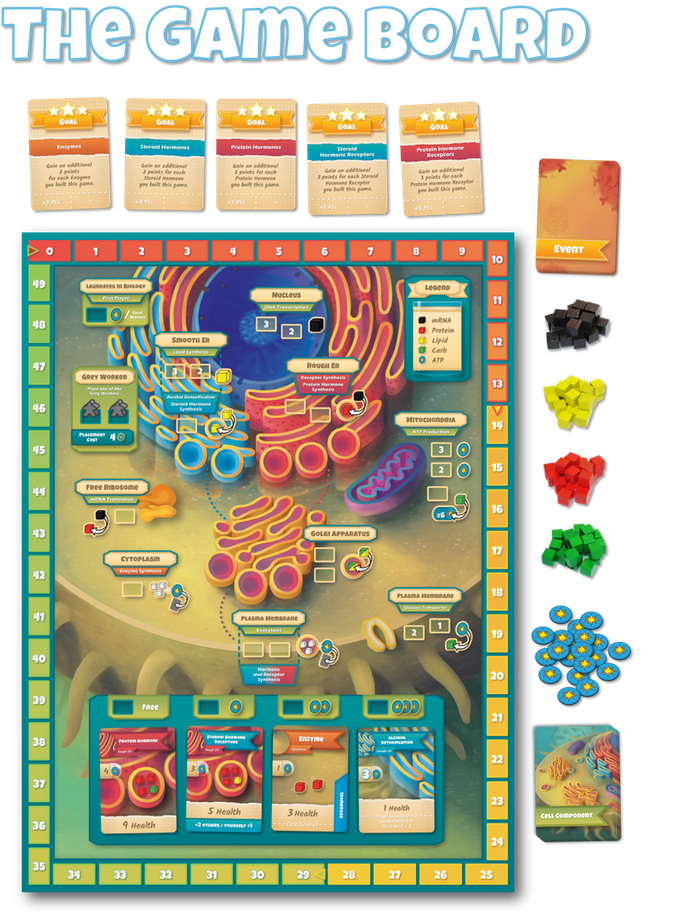 It seems like conquering the world, trading in the Mediterranean, and exploring dungeons are themes that perpetuate the board gaming world.  Sometimes a game has such a unique theme that you want to look at it.  That’s what happened when I heard about Cytosis: A Cell Biology Board Game, which currently is raising funds on Kickstarter.  Making a worker placement game seems to make sense, but why make a game such as this?  I went to the source and asked John Coveyou eight questions about the game.

Who are you and what’s your experience in the industry?

My name is John Coveyou and I started designing games as a serious hobby back in 2012. After my first science game took off on Kickstarter in 2014, I decided to quit my posh engineering job and start Genius Games, a tabletop game design and development company. Since then I’ve run 7 successful Kickstarters (5 games and 2 sets of children’s books) and am currently running my 8th Kickstarter!

Since then, I’ve play-tested and consulted for a number of other game designers, run Genius Games full time and am also an Adjunct Faculty at Webster University in St Louis. At Webster I teach Traditional Game Design and Crowdfunding.

Do you have some kind of science background to create a game about cells?

Science has been a discipline of mine for a long time! Back in the military they called me Professor Coveyou because I would spend my free time listening to chemistry and biology MIT lectures on my iPod. After that, I got my undergrad bachelors in Environmental Science with an emphasis in Biology, then my Master’s Degree in Energy, Environmental, and Chemical Engineering. I worked at an engineering company for few years and I also have 10 years experience teaching and tutoring Biology, Physics and Chemistry!

How did you come up with the idea of making a game about cells?

I was already designing and publishing games about hard science topics and have been astounded by the numerous processes that take place in our cells every second of every day! Not only that, cells and the processes they go through are a foundational part of any study of biology. I recall thinking about science topics that would make great themes for games and the idea of a game that took place inside a human cell really began to enchant me. And thus, the concept for Cytosis began!

What audience are you aiming at with Cytosis?

Our core audience for Cytosis is gamers and scientists.

Why use the worker placement mechanic?

How much play-testing did you do before the Stonemaier Design Day?

Cytosis had been in development for at least a year and a half before the 2016 Stonemaier Design Day. I wish I knew the exact number of times Cytosis was play-tested before then! I can say that I had personally play-tested somewhere around fifty, sixty or seventy times, as well as sending it out to hundreds of playtesters across the world.

The expansion sounds like it could be something cooperative. Do you incorporate any cooperative play in Cytosis or is it competitive the entire time?

Cytosis is entirely competitive! The competition can get intense sometimes, but I’ve designed it in such a way that the experience is competitive without being cut-throat. It’s really important to me that a family could pull this game out, play around the kitchen table, and walk away without dissention afterwards no matter who wins!!

I do hope to design a cooperative variant of the game as well as a solo variant, but those are still a long way off.

Your other projects are all science related. Do you think you might branch out into other themes, or do you feel that’s a part of your brand?

I have designed hundreds of games that do not have a science theme. But, everything that I publish through Genius Games will have a science theme of some kind! We may soon lay off the extreme hard science stuff, topics that you would address in a chemistry, biology or physics 101 course. But at this time, I love making these games and no one else is doing it.

A game that can teach while you play is a great way to learn.  Take a look at the Kickstarter campaign now for more information.