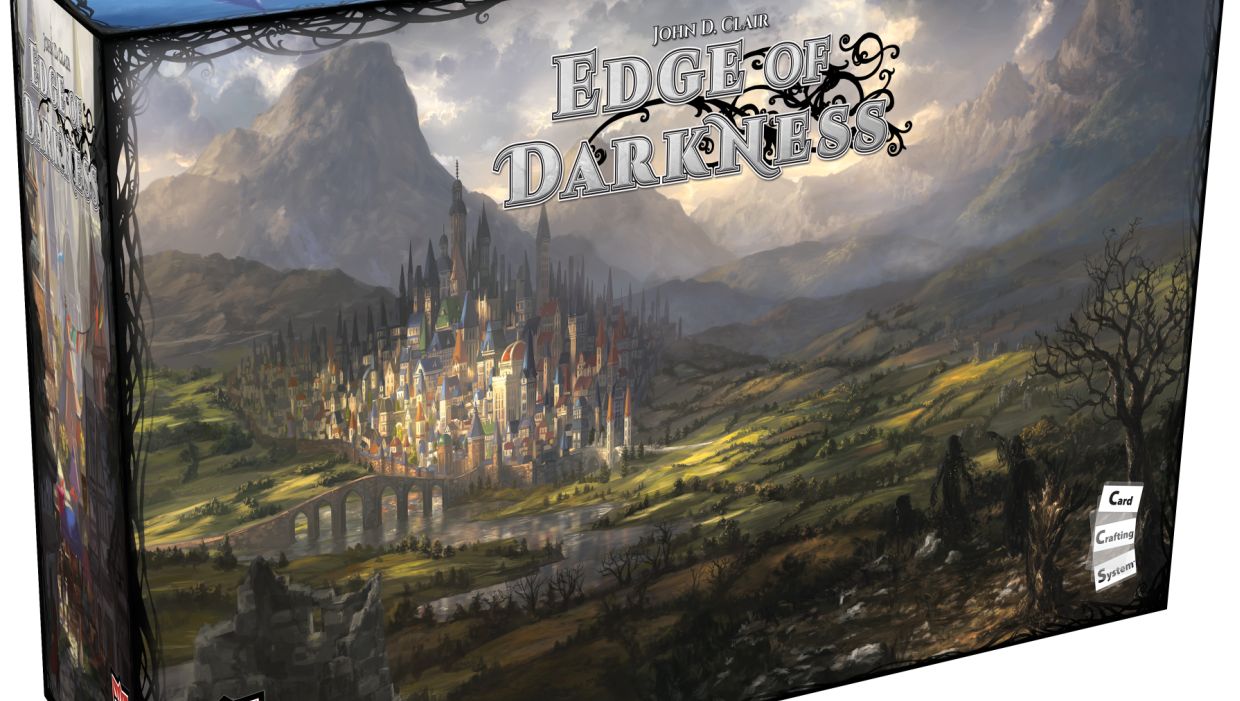 In 2016 AEG introduced the concept of card crafting in Mystic Vale.  The deck-building concepts we had seen in other games were present.  However, as players received a card they would add it to a sleeve to create their own custom cards in their deck.  This created many more combinations than just having static cards in your deck.  Now John Clair has designed a sequel using this Card Crafting System called Edge of Darkness which will be going to Kickstarter.  I asked him eight questions about his latest endeavor.

What was your inspiration in creating this card-crafting mechanic?

The idea of card crafting originated with the idea of using card sleeves as a functional component in a game rather than a means to simply protect you cards. It occurred to me that I’d never seen a game that needed card sleeves in order to play, so I started trying to think of ways sleeves could be used as an interest mechanism in a game. The original prototype I came up with actually didn’t use transparent cards at all, it was just normal card-stock cards inside special sleeves. It was later on during the playtest process (not too far in) that it occurred to me to try overlaying transparent cards inside the sleeve to “craft” the card.

What are the biggest differences between Mystic Vale and Edge of Darkness?

Everything. Both games use card-crafting as their core mechanism, but even the card-crafting is done differently in Edge (cards in Edge are double-sided, and when you upgrade one side of the card with a good effect you also upgrade the other side with a bad effect). Basically everything else about the two games is also different.

Mystic Vale has a bright aesthetic, while Edge of Darkness has a much darker theme. Are both games in the same universe and why move to such an intriguing setting?

Yes, both games are set in the same universe, but in very different parts of the world. However, there is thematic connection between the wilds of Mystic Vale and the front-line against the darkness in Edge. A common criticism of Mystic Vale is that the theme is thinly apparent in the mechanics, which I think is not unfair. However, I don’t expect Edge will get similar criticism. Both games had quite different design paths with regard to the theme. For Mystic Vale, the mechanics of the game were essentially done and then we tried to pick a theme that we thought captured the relaxing play experience of peacefully growing your deck into a powerful engine. For Edge of Darkness however, I began the design only with the idea of card-crafting; then I had the idea of double-sided cards with a good and bad side; and from there the mechanics and theme were designed and refined together. Therefore, the theme in Edge feels much more integrated into the decisions and actions you take during the game.

What is the purpose of using double-sided cards?

This idea originated from a little game I designed a year or so before card-crafting occurred to me. That game died in prototype form, but I always liked the idea of the back-side of cards representing monsters to defeat or challenges to overcome, and the front-side representing the actions and powers players have available. When I had the card-crafting idea, I decided to see if it could work well with this good/bad double-sided card dynamic. Card-crafting meant that the front and back of the card could get upgraded at the same time, making for a natural scaling of the monsters with the player’s power—each time the players add a new power to a card they also make the threat on the back of the card more dangerous.

The tower gives Edge of Darkness a table presence that makes people notice. What does it do and how did you come up with it?

I wanted there to always be monsters threatening the players, but for the monster attacks to happen sporadically and unpredictably. For example, I didn’t want there to be a predictable phase each round where Monsters attack. I also didn’t want players to know exactly who a threat would attack. And finally, I did want players have some information to help them estimate within a probability range when and who monsters might attack. I found the tower solved that fairly complex goal in a fun way that put minimal bureaucratic burden on the gameplay.

The tower dictates when threats attack, and which player they attack. Cubes are dropped into the tower each turn and tumble randomly into 3 different zones. Usually nothing happens, but eventually a zone reaches the critical mass of cubes causing a threat associated with that zone to attack. Who it attacks depends on which color has the plurality of cubes in that zone (e.g. if there are more blue cubes than any other color, the blue player gets attacked). Cubes come out of a bag, and the bag only refills once it is empty, meaning if a lot of your color cubes get drawn early in the game, less will get drawn later in the game. Also getting attacked can be a good thing if you are able to successfully defend.

On each player board there is an area called the “Threat Zone” which holds the cubes you are going to drop next round. This gives players the opportunity to see the quantity and color of cubes that will be dropped 1 round into the future. However, players will not yet know how those cubes will bunch together once dropped into the tower. There is partly where players’ ability to plan within a probability range comes from. As a simple example, you see a lot of your color cubes going to be dropped next round, maybe you should use this round to build some defense.

Do you feel that gamers that haven’t played Mystic Vale will be able to catch on easily to Edge of Darkness?

I don’t expect learning Edge of Darkness will be much more difficult for people who have not played Mystic Vale. The two games are very different. If you like the concept of card-crafting and you like the sound of a medium-weight euro-with-theme experience, there’s a good change you will enjoy Edge of Darkness, whether you liked, didn’t like, or haven’t played Mystic Vale.

If the Kickstarter is successful, will we possibly see more locations, advancements, starter cards, and allegiances?

Oh yes! If we can get past our funding goal we have a number of stretch goals planned, some are component upgrades, many are content additions.

Thanks so much for the questions! And thanks to the readers for giving this a read. If Edge of Darkness sounds interesting, please consider backing it on Kickstarter February 20.

Edge of Darkness seems to take card crafting to another level with double-sided cards and the cube tower.  Check out the Kickstarter campaign for more details and to pledge for a copy.