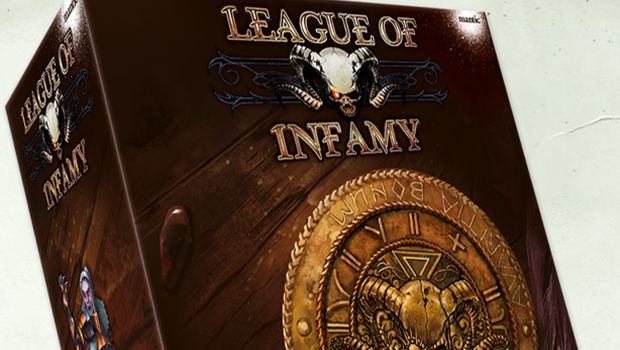 Mantic is known for their miniatures games, from their Walking Dead skirmish games to Deadzone and Hellboy The Board Game. They also have the Kings of War universe that Dungeon Saga is set in. Now Mantic is turning the dungeon crawl genre on its head with League of Infamy, which is currently funding on Kickstarter. I interviewed Lead Designer Sophie Williams to find out more about what sets League of Infamy apart.

What sets Kings of War apart from other fantasy settings?

The world of Pannithor is a rich and evolving landscape of classic fantasy archetypes and new and exciting twists. Players can explore it via multiple formats – wargames, skirmish games, dungeon crawlers, RPGs, novels and adventure gamebooks. All these mediums continue to flesh out not only the history of the world, but also push the timeline forward, with gamer interaction helping shape the stories yet to be written. A huge variety of races, cultures, unexplored lands and mysteries, all cradle the backdrop of a cataclysmic god-war that shaped the current world – bringing war, conquest, hope and adventure in equal measure. Much of the world is yet to be explored, and our players will help take us on that journey.

We were really keen to make the Keep Master role as interesting as possible – it needs to feel like you’re doing more than just running the adventure for the Villains! As the Keep Master you really are the master of your domain, even more so than in Dungeon Saga – you get a lot of control over how you set up you defence for each scenario, and you’re always engaged and looking for ways to mess with the Villains. The fact that all your cards are dual-use (you can use them for a cool effect which is quite situational, or discard them for a generic bonus) means you have lots of decisions to make. Oh, and because the Villains are already set up to backstab each other, you can get quite clever and engineer situations that really tempt them to do so. In short, being the Keep Master is great fun!

Besides “switching sides,” how does League of Infamy differ from Dungeon Saga?

There’s a much greater information on player interaction and decision-making. For example, each Villain gets three actions in their turn – they can do the same action three times, or three different actions. This gives you great flexibility; if you really need to get across the board you can make three Move actions, or if you want to Fight loads you can do that. Most actions also include a free one-square “step”, which means you don’t have to throw away a Move action to engage a nearby Defender; however, it’s up to you whether you use this before or after the action, so if you kill a Defender and they drop some Loot, you can use your Step to move up and collect it (if you didn’t use it to engage them, that is).

To balance out this increased flexibility, there’s the fact that the Villains aren’t quite pulling in the same direction. The League being what it is, they demand results and encourage a little bit of healthy in-fighting, so after each scenario you’re individually ranked based on how much loot you brought back, and how many infamous deeds you performed. This directly affects your character’s development. If you bring back the most loot you’ll get the first pick of shiny baubles to bring along on the next raid, and if you earn the most Infamy you’ll get to spend time with the League trainers, learning new abilities! This means the Villains need to walk a line, because they’re all trying to get ahead individually, but if they don’t work together they’ll all get captured. The League don’t like having to break their agents out of jail, so expect consequences! 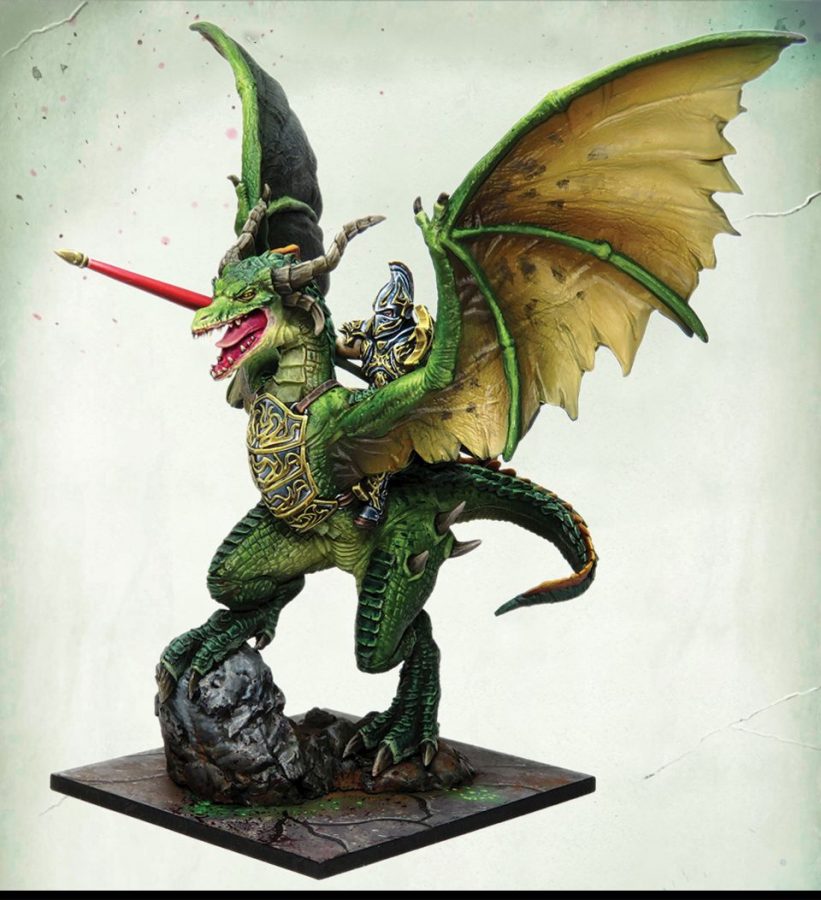 Will players turn on each other at specific milestones for the mission, or will there be other factors to nudge others to antagonize each other?

It’s all very organic. In theory, the Villain players can decide to work as a team from start to finish.

It all starts going wrong when you introduce Disorder cards. These are a great example of what we were talking about in the previous question – they literally let you screw the other Villains over in order to get some Infamy and some kind of in-game advantage. They’re a great temptation – and there are some very legitimate uses for them which, although they hurt your team-mates, might be good for the mission overall. But… good luck explaining that when you’ve just swiped that Healing Potion they were about to drink!

In our experience, even when a group’s playing nice, everything shifts when a Disorder card is played, even if it’s played innocently and in good faith. Everyone suddenly sits up straight and starts paying attention. The Keep Master, if they know what they’re doing, will remind the wronged player at every opportunity that they’re owed a bit of revenge… and before you know it, more Disorder cards are coming out.

Oh, and we haven’t mentioned Escalation cards, which come out of the Disorder deck when more cards are drawn…

Can League of Infamy be played completely cooperatively, or is there a “winner” each game that gets the best spoils?

In campaign play, each player scores based on the things they achieved in the game. This is a combination of objectives achieved, loot they’ve gained and infamy they have earned. Each Villain gains a bonus depending on their position:1st, 2nd, 3rd, 4th. But every Villain does still gain a bonus. Even if they all get captured at the end of a mission, they’ll still get something (they may just have to pay back the League of Infamy for breaking them out of jail).

Because of this, until the last dice roll, there’s always something to play for. You might get that bit of extra Loot that puts you in 3rd instead of 4th. That last attack might stop you from getting downed in the last turn of the game, so you don’t get captured. You might be able to steal a bit of Infamy which gives you the edge in the last round. Even if you come last every single game during a campaign, your character will still get Loot and improve bit by bit. 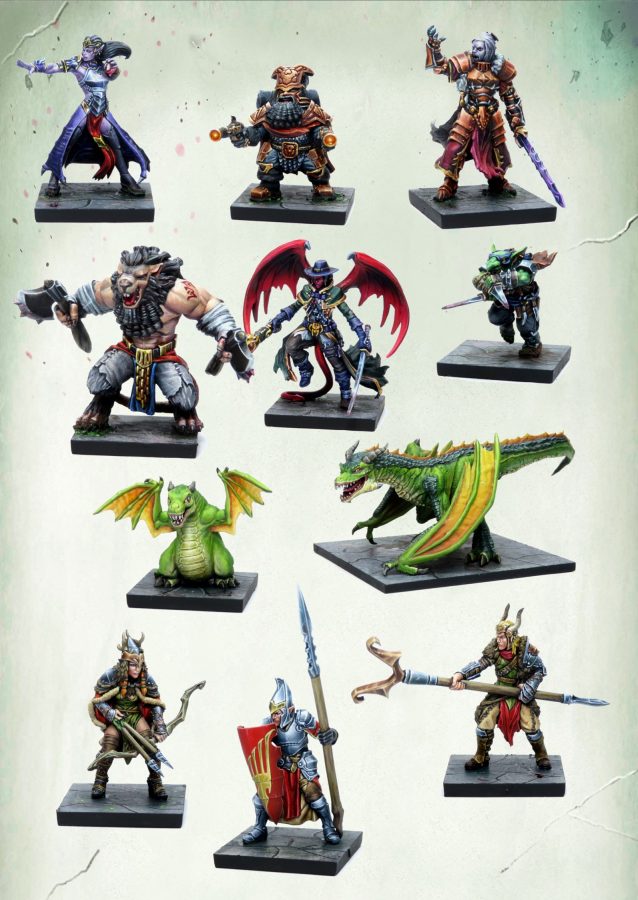 Alarm tokens allow the Keep Master to activate and reinforce defenders. In later expansions, there are cool abilities on cards that require Alarm Tokens too.

You have created an AI deck for the Keep Master. Will there be multiple Keep Master decks with different types of AI, like a more aggressive deck or a defensive deck?

One of the ways the Keep Master can control the style of play is to set up the Keep differently, either with more Defenders on the board, upgrading to stronger doors for rooms, placing traps and barricades and selecting defenders. The Keep Set Up cards will replicate this kind of experience, guiding the style of Keep the Villains go up against. During the game, there’s a standard AI deck, but the playstyle turn to turn will vary.

Will it be possible to use any of these characters in Dungeon Saga, or vice versa?

Plenty of dungeon crawlers out there try to differentiate themselves by mechanics or setting. It sounds like League of Infamy will provide more player interaction, both friendly and fiendish, to the genre. Be sure to check out their Kickstarter campaign. Plenty of stretch goals have been unlocked already, and the figures look great. Don’t wait though, as you’ll have a little over a week to get in on the action.