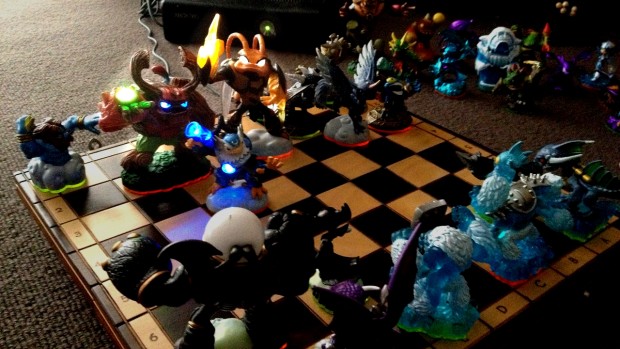 When I posted about Skylanders Chess late last week, I had no idea I would hear back from the author of that article.  I took the opportunity to ask him eight questions to find out more about this new twist of one of the oldest games ever created.  Here is Crazy Eights with Andy Robertson.

What interested you and your kids most about the Skylanders figures?

It was the quality of the figures themselves and the way you could play both in the game and away from it. Also the aspect of collecting a line of toy figures also appealed. Then as they extended the experience with Giants the interest grew.

How many figures do your kids own?

We have about 12 for Spyro’s Adventures and another 12 or so for Giants. We often film unboxings for Skylanders Waves but they only keep the few of these figures they like the best. The others we pass on to families and friends (and sometimes a Charity shop).

Who created Skylanders Chess, you or your kids?

The kids made up the general rules and had the idea, and were trying to figure out how to incorporate the Portal. I helped them flesh out the rules and balance the two sides.

[youtube]xZSsqV_qQhA?list=PLC4FF7064C27C8CAD[/youtube]
How are the characters for sides chosen in Skylanders Chess?

Each side picks two Skylanders elements and then figures from each of those ensuring there are equal types and numbers on both sides. If the figure collections don’t match in each of the elements  some improvisation is required to ensure that it’s a fair game.

What are the basic rules for Skylanders Chess?

Currently the exact rules change a little each time we play. But I think over time these will settle down. One area we are talking about is what counts as a win. The kids are keen on it being if you take both Giants on one team, that counts as a Check Mate, or Sky Mate as they call it. Here are the general rules we start with…

Two sides are setup on the dark squares of a checkers board, each player picks two elements to use as their Chess pieces. Each side needs at least seven pieces although this can be supplemented if necessary. The following pieces have special abilities, otherwise the game proceeds like Checkers:

Some of the characters in Skylanders look like they take two squares on the board.  How do you account for that?

The Giants figures usually take up two squares which has both positive and negative aspects for them. It means that their area of attack is greater, but also it means they can be taken on either of their two squares. When moving they count from the furthest forward square they occupy in the direction of travel.

The Portal of Power underneath makes the figures light up, which is an important part of the game.  Are there any rules that allow the board to move, shifting the location of the Portal?

[singlepic id=10999 w=320 h=240 float=right]We setup the board beforehand, while the players aren’t looking. This means that they don’t know where it is. This leads to both players investigating and guessing where the safe zone of the portal is.

What are some of your kids’ favorites when it comes to the Skylanders figures?

Series 1 Hex is a favourite of my daughter that has no arms and whose head comes off. Although she could have upgraded to a Giants version, she still has a big attachment to that old figure. My youngest son really likes Eye Brawl and my oldest is keen on Pop-Fizz. I’m still quite partial to Stealth Elf, particularly in her Series 3 iteration. It will be interesting to see how the new Swap Force characters go down in comparison.

Be sure to check out Andy Robertson’s YouTube channel to get more information about Skylanders Chess and its development. 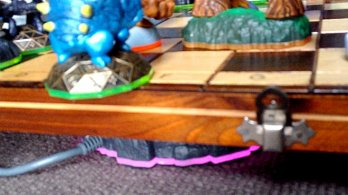 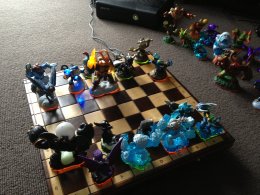 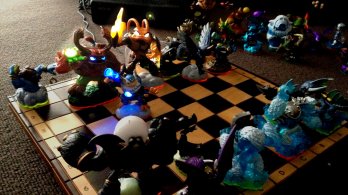