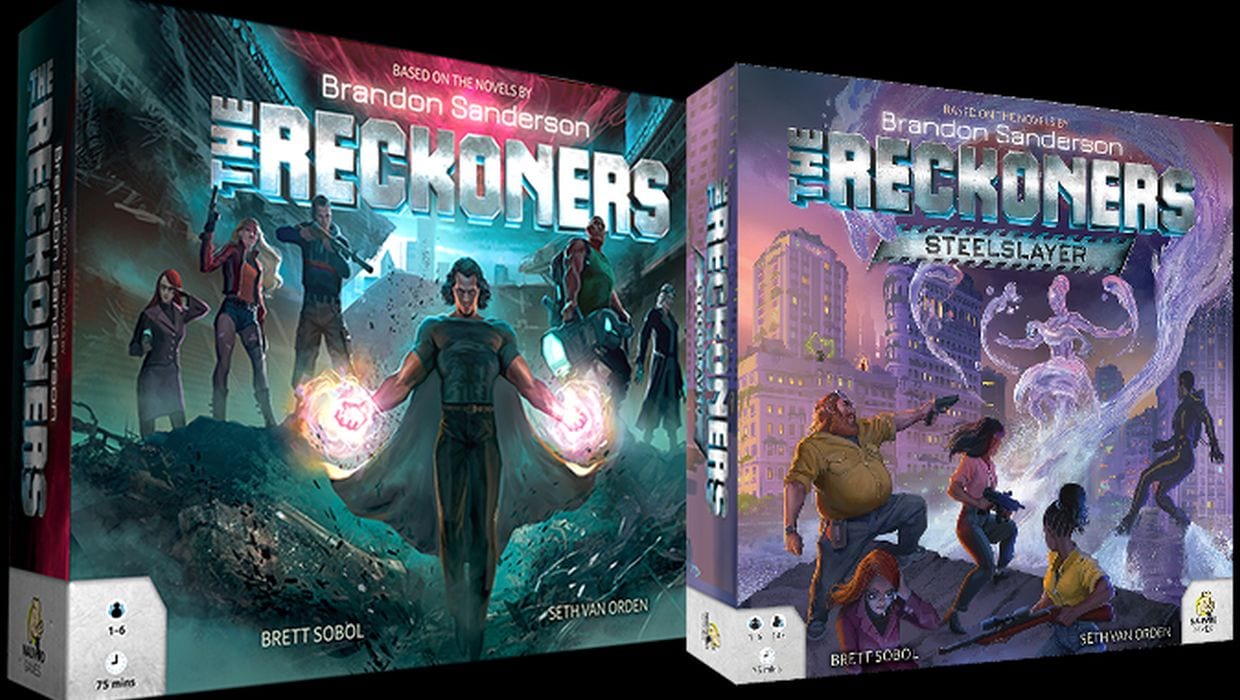 Let’s face it, board gaming is hard during the current environment of social distancing.  However, that doesn’t mean that Kickstarter projects have stopped.  Cooperative games are great for solo play or playing with family, even if you need to help other players make decisions as you play.  The Reckoners is a cooperative game from Nauvoo Games that funded on Kickstarter in early 2018.  Since then the game has gone to retail, but Nauvoo Games is looking to fund an expansion, Steelslayer.  To find out more about Steelslayer I asked Brett Sobol eight questions.

For those unfamiliar with The Reckoners, what is the setting?

Based on the books by Brandon Sanderson, The Reckoners board game is set at some point in the future when a mysterious burst in the sky gave ordinary men and women extraordinary powers. They’re called Epics. But, every Epic turned out to be evil. Nobody fights back… nobody but The Reckoners.

In The Reckoners board game, you are a member of a skilled group of normal humans who assassinate Epics. Together, you must work to defeat a Boss Epic and save the city. The original board game takes place in Chicago (akin to the first book Steelheart) and the new expansion that is now on Kickstarter takes place in New York City and Atlanta (similar to the rest of the book series).

How did you pick up the license for The Reckoners series?

We first became fans of Brandon’s work when he finished Robert Jordan’s The Wheel of Time, and we have been huge followers ever since. One day, we saw him at a book signing event and simply asked him how to go about potentially licensing his books for a game. We were put in touch with his agents and sent them a copy of our previous game, Stockpile. They loved it! From there, it quickly turned into a discussion of what content and what game. We believed that The Reckoners would make for an awesome tabletop adaptation due to its unique IP, and we pitched our concept for a simultaneous, dice-based cooperative game. The team was excited about the idea, so we continued to court them for the license until we reached a final agreement and locked in the game’s design. Throughout the process, the folks at Dragonsteel Entertainment and JABberwocky have been extremely gracious with their time and feedback, and we’re thrilled to be working with them to bring Brandon’s novels to life and create games that make memories around the tabletop. 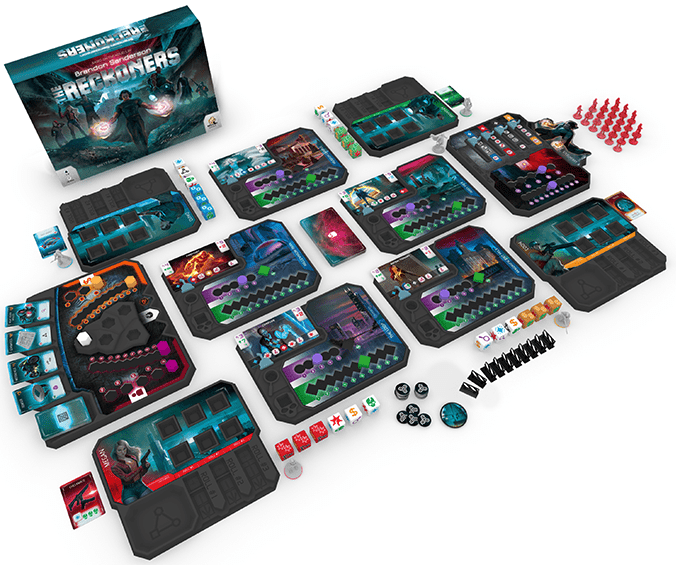 The Reckoners is a cooperative game where you play as heroes without powers. How are the players able to defeat these super-powered Epics?

Cooperation. The Reckoners is all about using teamwork to do the impossible, but some super-powered Equipment doesn’t hurt either.

Nauvoo Games first game was Stockpile, an economic stock market game.  The Reckoners is a much different game.  How did this sudden shift come about?

We design the games based on what inspires us. Sometimes that inspiration is a game mechanism (bidding on items with a mixture of public and private information in Stockpile) or a theme like The Reckoners. We do our best to harness that inspiration and manifest it into an intricate system for players to make fun and interesting choices. Although our games don’t necessarily overlap in terms of the type of game, we like to think that the Nauvoo Games logo means that you can expect a game to be full of these exciting and entertaining decisions.

Did you have plans for the Steelslayer expansion during the Kickstarter campaign for the base game?

Yes. We always envisioned an expansion for The Reckoners. We laid these plans years ago, but we time after the release of the base game to refine the content based on community feedback and review it with Brandon Sanderson’s team to ensure it was ready to be commercialized.

Thankfully, we have an amazing group of volunteers who playtest Nauvoo Games prototypes and help us ensure each facet of the game is fun and balanced. COVID certainly raised more challenges in terms of our ability to personally playtest the games with fewer opportunities to get together with folks face-to-face and canceled conventions like Gen Con. However, thanks to our volunteers and some late-night Zoom gaming sessions, I believe we were able to put the polish on it that fans have come to expect from Nauvoo Games.

Do you think that The Reckoners lends itself well to playing solo?

Having played it solo a lot (probably more than cooperatively), I would say yes. At its heart, The Reckoners is a giant puzzle. I believe that shines in the solo mode, where you are in charge of a mass of resources fighting against the “cardboard AI” we’ve designed.

Is there a possibility we might see more from The Reckoners series in board game form?

It’s possible. One of the most amazing (and idiosyncratic) aspects of the board game industry is how receptive it is to feedback. Part of this is plain good business, but part of it is also a limitation of the medium as board games are often played in hyper-local, communities. In their latest article on the digital future of tabletop games, Jonathan Lai and Andrew Chen at Venture Capital powerhouse Andreesen Horowitz discuss how network effects (among other trends) will continue to accelerate in tabletop games. While their article captures a lot of the benefits that this will provide for players, I equally think it will benefit creators like us, who will be able to tap into more insights than ever before for building new products. So to arrive at the answer to your question, the more we hear from our fans about what they like or would like, the more likely we are to address it with a new product.

The Kickstarter campaign still has two weeks left on it, and if you don’t have the base game you can pledge and get that along with the expansion.  If you like tough cooperative games with a ton of options for characters to use, then take a look at The Reckoners and the Steelslayer expansion.