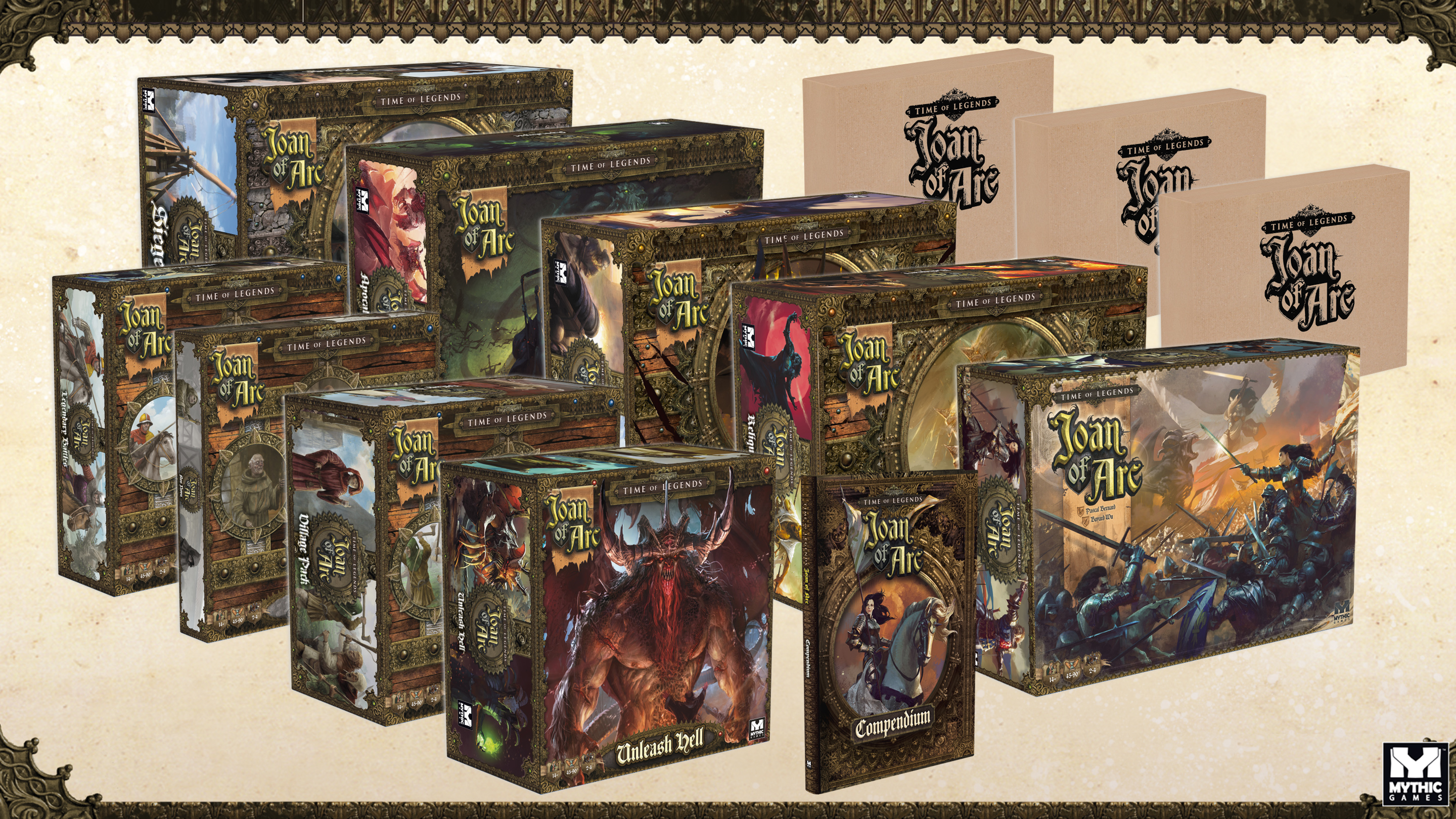 Mythic created a hit with Time of Legends: Joan of Arc.  With an underutilized setting and multiple ways to play the game, it’s not hard to see how this miniatures game became a big hit.  Now Mythic Games is funding a “1.5” version of Joan of Arc on Kickstarter.  To find out more I interviewed Az Drummond, Communications & Community Manager at Mythic Games, to find out more about what is included in this Kickstarter.

Why choose Joan of Arc as a theme?

The Hundred Years’ War is the pinnacle era for chivalrous knights and medieval battles. It started declining afterwards so we felt it was a perfect setting for what we wanted. Also, Joan of Arc is the most famous female knight of all time, and a role model not only for the French people but globally. We love the medieval setting and wanted to add fantasy to it, but not in the usual way, we didn’t want traditional “high fantasy” elements like elves and goblins. We wanted something deeply rooted in culture and in the people’s mind at that time. So we assumed all of the beliefs of that time are real. This blending was unique and gives a very special atmosphere to Joan of Arc. The game mixes historical battles with mythical scenarios in a totally seamless way.

How many scenarios are being included in this Kickstarter compared to the first Kickstarter?

We’re beginning the Joan of Arc 1.5 campaign with 44 incredibly diverse and unique scenarios. All the scenarios from the previous campaign will return and are included in this campaign. We will be revising all existing scenarios based on playtester and backer feedback, plus we’ll be updating each scenario to align to new 1.5 rules. We’d also love to go beyond the initial 44 scenarios during the campaign itself with brand new stretch goals. Plus we are very keen to continue to develop and share online scenarios for Joan of Arc in the years to come.

Alongside our own scenarios, we plan on featuring popular community created scenarios too. We’re seeing our community already coming up with creative and exciting scenarios shared via BoardGameGeek, Facebook and our Discord channel. This will only continue to expand when we release the digital “Scenario Creator” which will give our community all the tools and assets from the game that they need to create fantastic new scenarios. 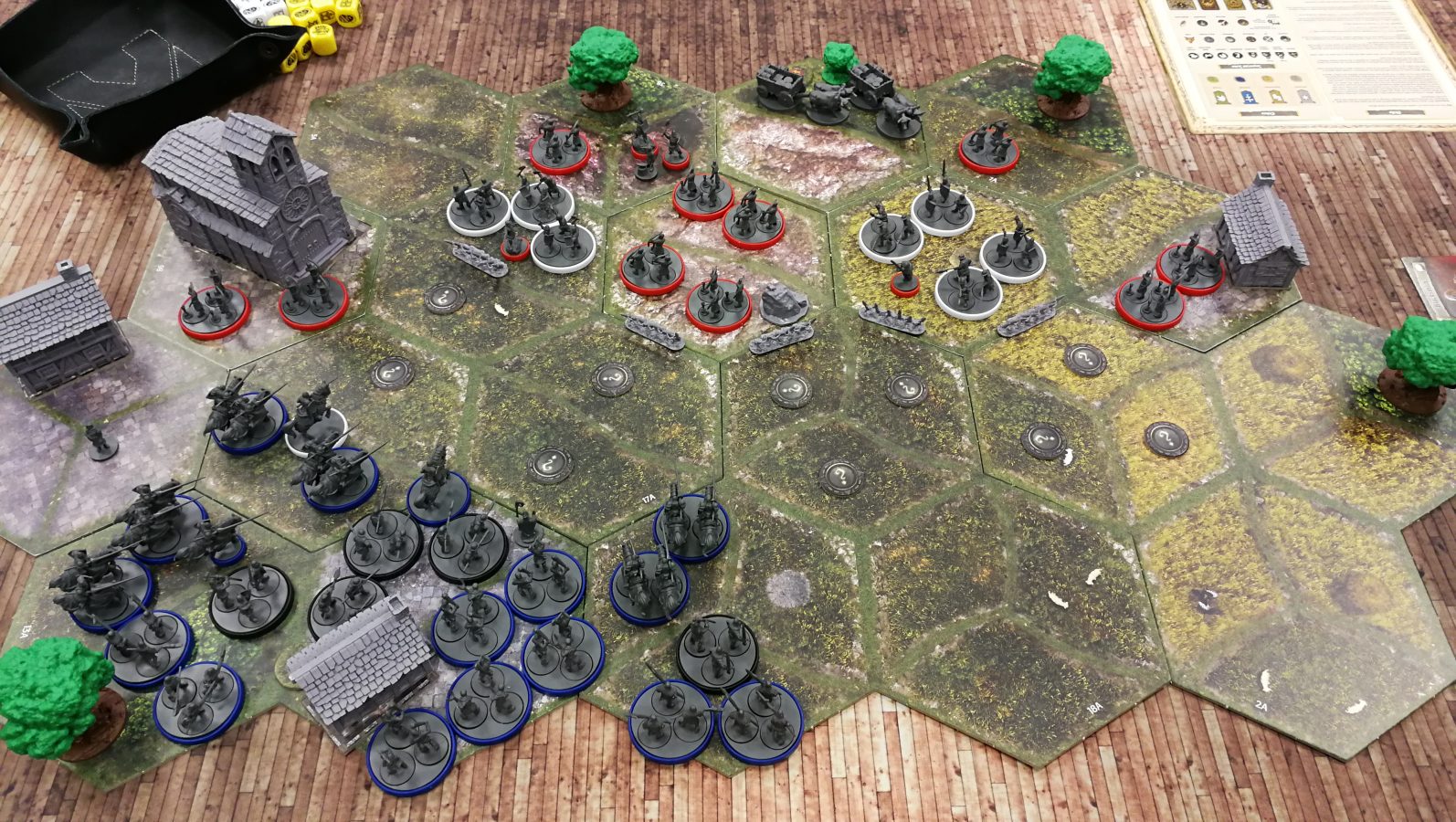 Does each scenario have a single specific objective, or can the objectives change depending on how the scenario is played out?

Every time you sit down to play a scenario in Joan of Arc, you’ll be presented with various victory conditions. These are always asymmetrical and often involve multiple potential paths to success. For example, do you attempt to kill the King of England or destroy his armies’ supply train, do you keep your werewolf hidden amongst the townsfolk or reveal it and attack the knight hunting you, do you ransack the town and set it ablaze or do you hunt Joan of Arc and prevent her from realising her mythical destiny?

While the victory conditions won’t change during the scenario, the discussions you undertake, the equipment you find, the Intrigue abilities you trigger and of course the tactical decisions of you and your opponent will shift the opportunities to win continually.

While the game is hex-based, some of those hexes are sectioned off to two or three sections. What was the thinking behind this decision?

The hex-based maps give us a huge amount of flexibility when representing historical and mythical scenarios. In the Battle of Crécy, for example, using the modular hexes we can easily simulate the villages of Estrée and Wadicourt, plus Crécy itself, recreating the vital strategic positioning found in the actual battle. Similarly, we can create smaller more condensed maps when we need to represent a single town with buildings, fortifications and townsfolk. The hexes allow for real flexibility in setup and scale.

Within the hexes themselves, we then choose to have either 1, 2 or 3 areas. To oversimplify for a moment, this means with a 12 hex game board, we could have anything from 12 areas up to 36 areas. This further enhances how we can make battlefields feel more realistic by having chokepoints, open fields and hilly glens all represented. Adding on a layer of terrain elements like swamps, rivers, hills and more, we can create hugely strategic situations which will reward the player who can use the map, hexes and areas to their advantage. 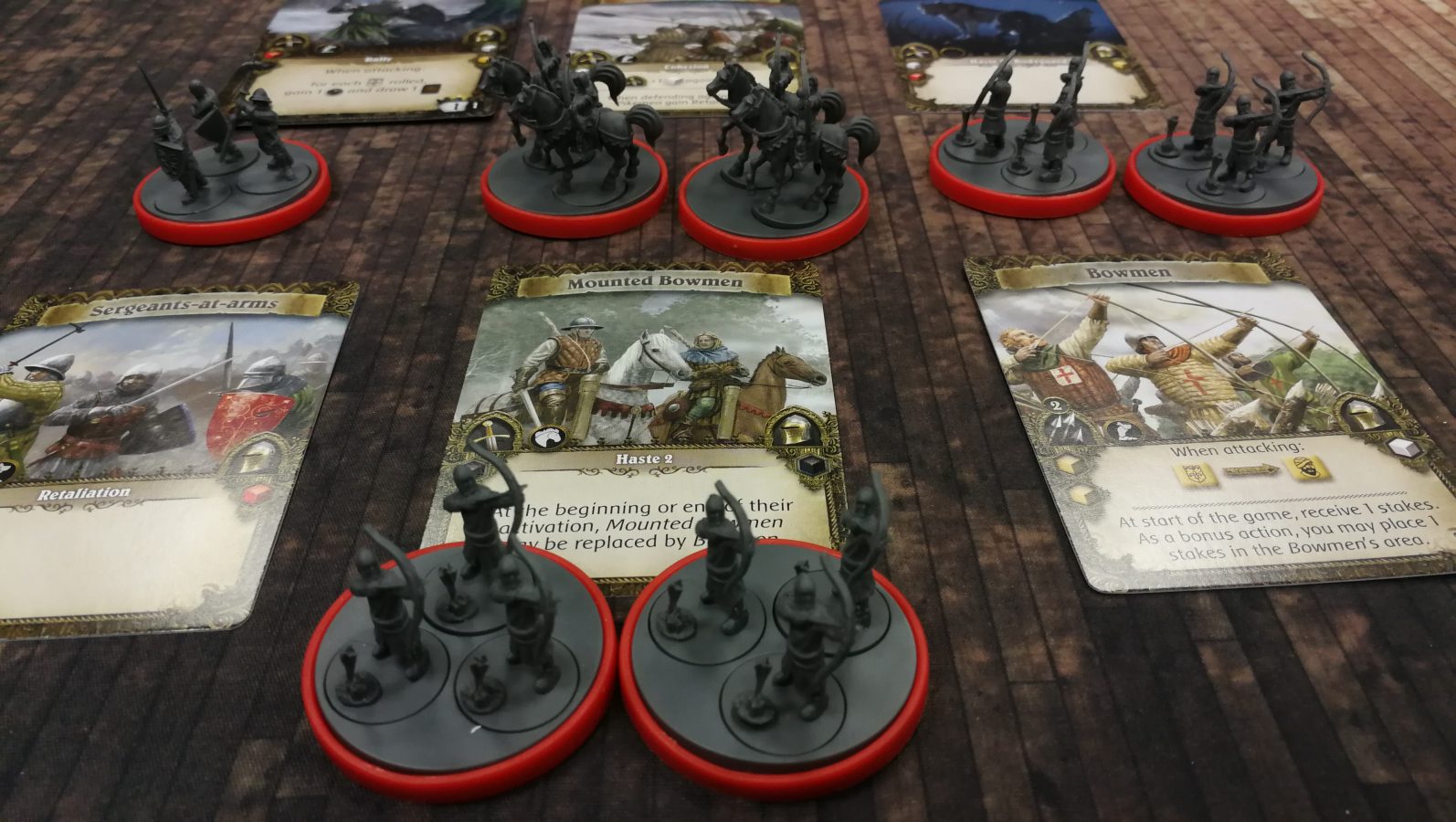 There’s a large number of miniatures included in the game. Did you have to make the hexes extra-large to ensure they could fit on them?

We chose the hex sizes to give us a game which could fit easily on a coffee table for certain scenarios but also scale all the way up to 6’ by 4’ tables with sprawling battles or sieges.

One thing we often get questions about is why we chose to have single units of troops represented by bases of two or three miniatures. There are a number of answers to this, but two answers stand out the most.

The first is the sheer aesthetic of your army on the game board. Having units of Pikemen, Halberdiers or Mounted Knights simply looks and feels so much better when it looks like an army to begin with. We have these gorgeous representations of medieval forces and didn’t want Joan of Arc to look like a hex and counter wargame.

The second reason is to really differentiate the characters from the troops. Every scenario revolves around a story, battle or myth that is intrinsically linked to the characters involved. Having these characters be individual miniatures which stand tall, commanding and leading your troops, just felt consistently better than solitary minis representing every single unit when we developed the game.

The original game included a few fantastical elements. Why include more mythical elements in the expansion?

With the new campaign, we’ll be adding not only the Teutonic Order, but also introducing medieval Eastern Europe. When we looked at the Teutonic Order’s crusades, we simply couldn’t ignore the Pagan way of life that they sought to destroy.

By embracing the mythical and religious aspects like Perkūnas the Pagan god of thunder or Laima the Baltic god of fate, we can better immerse players into the world and beliefs of this time. We also relish the opportunity to design mythical scenarios which bring forth the power of nature and sacred groves as we use the existing ruleset in interesting new ways.

This does not mean we’ll be ignoring the militaries of Eastern Europe of course! The Polish–Lithuanian union and their armies will feature prominently in the new expansion, plus we’ll be introducing lots of new gameplay mechanics through the highly mobile Tatar forces. 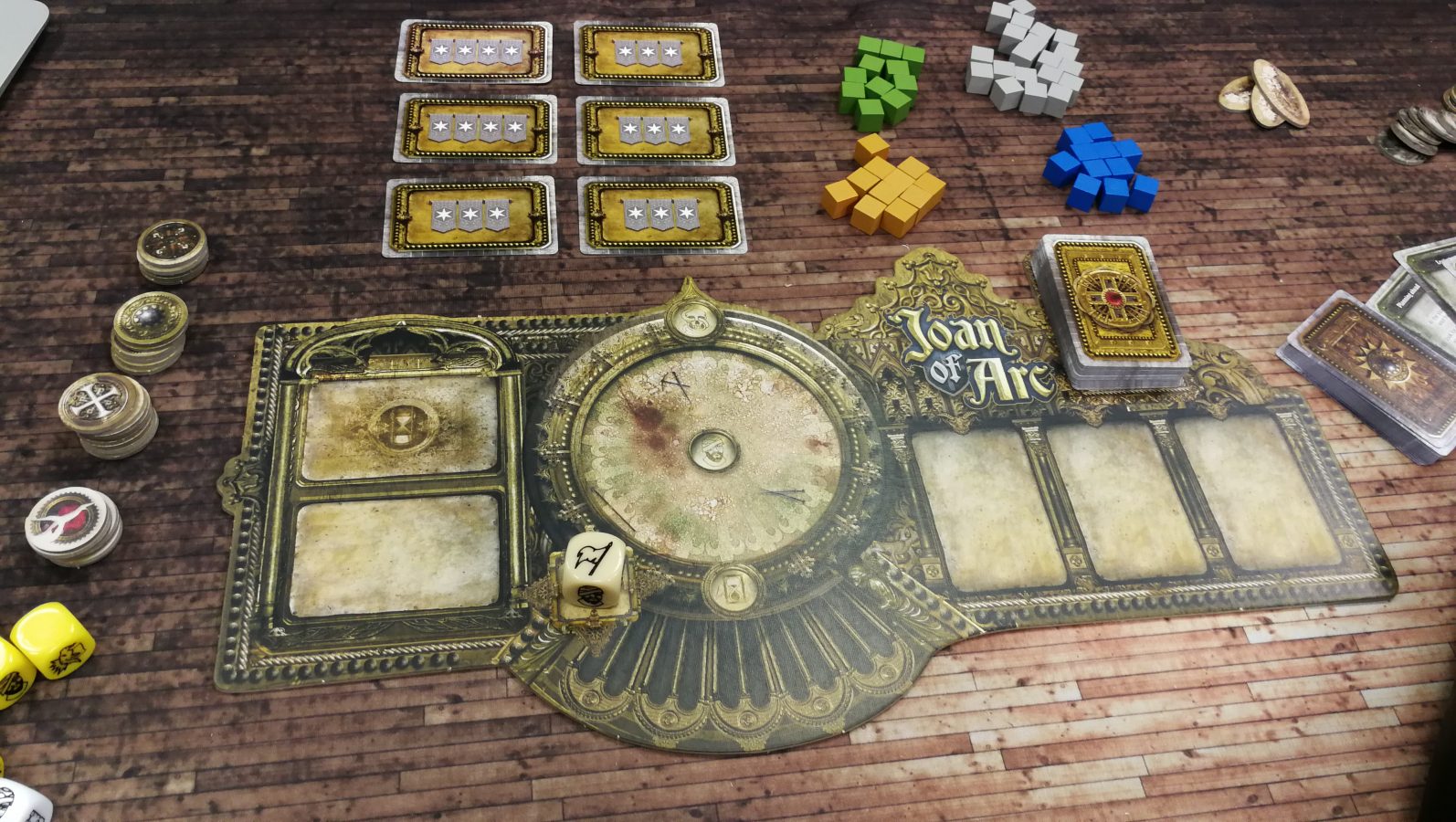 How are you supporting gamers who purchased the previous edition of Time of Legends: Joan of Arc?

We’re really keen to involve all of the backers who helped bring the Time of Legends to life in the first place!

If a previous backer or late pledger pledges $20 or more on items during the Joan of Arc 1.5 campaign, we will send them a 1.5 Update Pack, which will be shipped for free, for every Maiden Pledge (Core Box) they bought during the first campaign.

The 1.5 Update Pack will feature a hardcover Scenario Collection containing all updated scenarios from the entire Joan of Arc range, a copy of the new 1.5 Joan of Arc rules, a set of all updated 1.5 cards and a printed miniature guide to help with game setup.

We will also make digital versions of the Scenario Collection, the 1.5 Rule Book, updated cards and a printable miniature guide available for any backers who would prefer not to have the physical copies.

Is it possible we might see other figures or eras with the Time of Legends moniker?

We’ve spoken at length about how we have a long vision for Time of Legends: Joan of Arc and how we want to continue the support for the game for years to come. This is true, now even more than ever as we run the new 1.5 campaign.

What we haven’t spoken about is where the Time of Legends system might expand to or what other genres or periods in history we may explore with it. It’s fair to say that we have lots of ideas and our community have given us a plethora of suggestions, but for now, I’m afraid you’ll have to let this guy keep his secrets. 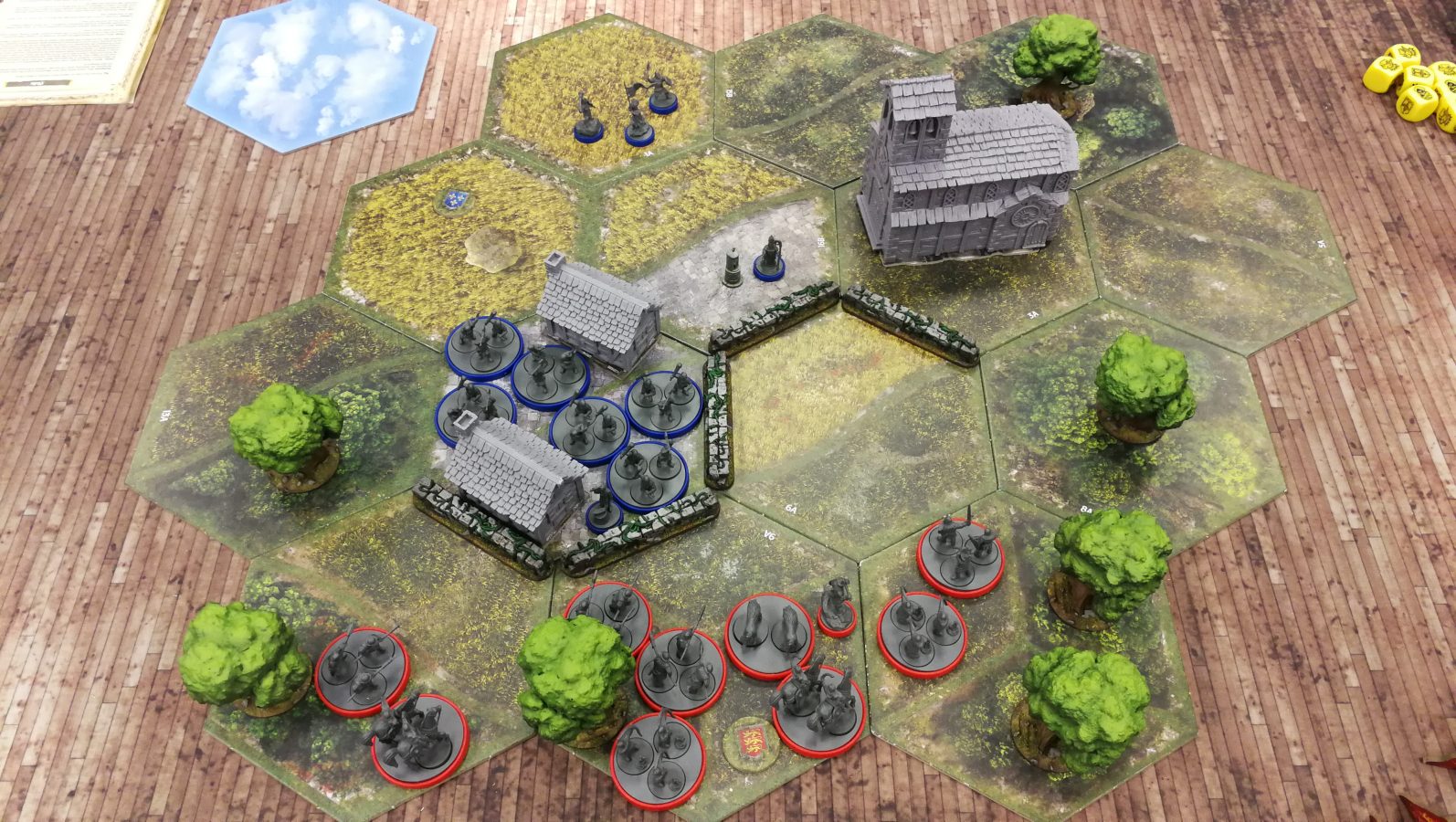 If you wanted to take a look at Joan of Arc before but didn’t get a chance to with the first Kickstarter campaign, now is a great time to get in on the current Kickstarter.  It’s already fully funded and has about two weeks to go.  There’s plenty of options for all price ranges as well.  The game looks fantastic and has gotten great reviews.  If you’ve already gotten the original game, Mythic Games has some new exciting options for you as well.