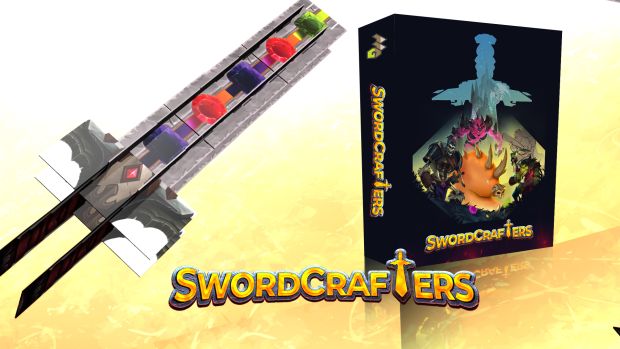 Kickstarter is a great way for new designers to get their board games funded.  However, often those games are sequels or don’t do much to stand apart from other games thematically or mechanically.  When I saw Swordcrafters, I wanted to get a closer look at it because of the table presence.  Instead of laying down tiles on a table, you actually place tiles into a cardboard hilt.  I contacted Adam Rehberg to get answers about the game currently funding on Kickstarter:

I’ve been a huge video gamer since I was little, and my parents retiring actually helped get me back into board games. One summer, we went camping and they said that we would be playing “the farming game” that night. That farming game was actually Carcassonne and since then I’ve rediscovered board games. I began designing games in Unity and then quickly vaulted into designing board games as a more tangible medium with more in-person interaction. Always dreaming of running my own business, I thought that game design and self-publishing was a great path to try it out. I’ve been lucky to have a home town buddy, named Chris Neuman, to help out with Adam’s Apple Games and also co-design on Swordcrafters.

How did you come up with the theme of crafting a sword?

This was a theme that started from a light dungeon crawl game, morphed into a dungeon crawl focused on crafting a sword, and then was retooled to focus 100% on the crafting of a 3D sword. The vision was solidified in the wee hours of Gen Con 2017 and we were somewhat joking about how many people would be buzzing about a game where you literally held a 3D sword as you played. The game has transformed from “just another game with a dungeon theme” to something that is very 3D and quite cutting edge.

What drew you to the “I split, you choose” mechanic?

This was originally inspired by the theme of the game. A sword makes a slice or a cut and we leaned into this to provide constraints for the player. Interestingly, the game was created before getting a chance to play many other “I split, you choose” style games so I think we ended up with a very unique take on the mechanic. What makes Swordcrafters unique is that we allow every player to make a cut into a grid of sword tiles and then every player also selects a group. This gives the first player more power than this mechanic typically does, but we balance that by having the future first player decided by the selections made by the players.

Why did you decide to craft a 3D sword into a hilt instead of just putting tiles on the table?

Once we had retooled the vision for Swordcrafters, we would not have made the game unless we could figure out how to bring the 3D object to life. Once developed, the 3D aspect of the sword actually added a pleasant mechanical surprise. Building the sword in 3D requires your mind to solve this 3D puzzle and plan ahead to craft your sword a certain way.

Does having an actual got create challenges for storing the game in the box?

A bit different than previous titles with 3D elements, we chose to integrate the physical 3D sword assembly into the gameplay. For that reason, players must disassemble the sword as well. The hilts were a potential opportunity to leave assembled, but they take up a lot of space when assembled. It made the most sense to completely disassemble everything. Once the game is stored, it looks more like a typical tile laying game.

How is the grouping of the tiles important?

I’m going to answer this question two ways. In the grid of sword tiles, each player is slicing through the grid and creating groups of tiles. The groups of tiles created determine what choices players have when selecting groups. A first player token is part of this so jockeying for first player as well as the tiles you need is the fun of the game.

Swordcrafters Relic adds more dynamic set collection into the slicing and selecting phases by introducing four more tiles per round. This accomplishes a few things. Players now can score points by ways other than only their sword. It also gives players mini-goals for crafting their sword that they need to focus on during the game. To get a better idea of this, think about the simple set collection dynamics of a Sushi Go. We expanded on those simple ideas by adding in goals that score not only based on how many you collect, but also impact the decisions you might make when crafting your sword.

Do you have any other designs in mind if Swordcrafters is successful?

Although I don’t have a clever 3D way to execute this yet, if Swordcrafters is successful then I think a natural next game would be called Shieldcrafters. If people love crafting and holding a sword, then they will also love crafting and holding a shield. This project has really helped me push the limits of my game design, 3D mechanics, and unique componentry in the board game space and I hope helps inspire other designers to take a crack at 3D as well.

While I doubt that gamers will be able to have fights after the completion of their weapon, the theme should really come alive with the hilts.  Take a look at the Kickstarter.  It’s fully funded with a week to go, and I don’t know of any other game like it.